RFC-174 is titled “UCLA-Computer Science Graphics Overview”. It's authored by Postel and Cerf of UCLA and dated June 8th, 1971.

This document is a list of graphics hardware and software available at UCLA's Computer Science department, and concludes with some future plans the department has, related to graphics.

They have two Imlac PDS-1 displays. These are vector displays (imagine impossibly crisp fluorescent lines), and are rectangular and oriented in what we'd call “portrait mode” today. These are new technology, having debuted just the prior year. They are not using these to their fullest in terms of software, as they haven't developed anything and are just going with the out-of-the-box software it shipped with.

They also have a DEC-340 station with a light pen, a Rand Tablet (see RFC-39), and a Lincoln Wand (see RFC-5). They've developed a lot more software for this station, including a polar coordinate visualization system that can control an external camera for producing diagrams for scientific papers and even animated fims; a scripting language that lets you do image transitions like fades, dissolves, zooms, etc; and a cool program called FISHEYE that applies a fisheye transform that maps a very large rectangular image onto the surface of a sphere, which as it turns out is an efficient (if disorienting) way to show rectangular image data on a circular display. 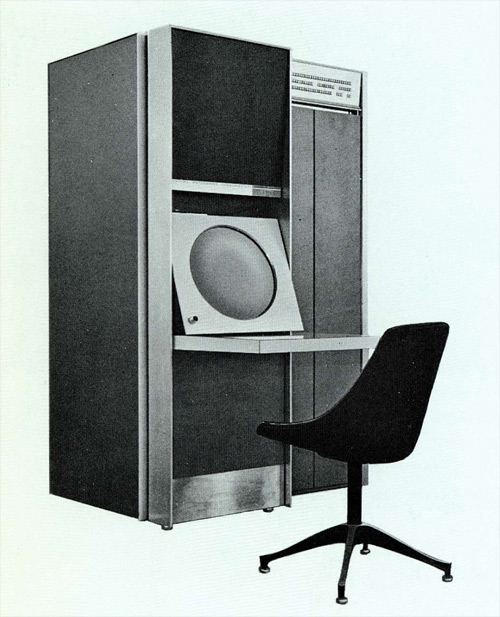 Here's the programming manual for the DEC-340.

The PDS-1 was a very popular networked graphics workstation. It wasn't just a terminal but rather a full on microcomputer of its own. Lots of neat facts thanks to the Blinkenlights folks, including this tidbit:

MazeWar first appeared at MIT in the early 1970s, using Imlac displays and the ArpaNet network. Legend has it that, at one point during that period, MazeWar was banned by DARPA from the ArpaNet because half of all the packets in a given month were MazeWar packets flying between Stanford and MIT.

FRESS, an early hypertext system (aka documents where text can link to other documents), made special use of the PDS-1. You can check out the technical manual for lots of cool diagrams.