This RFC is a report of what happened at meeting at MIT Project MAC on March 17, 1972, where eight people from the various ARPANET sites gathered to discuss plans for measurement experiments.

The new range of network measurement links described by a single list item in RFC-317 is given more detail here. About half of the links are reserved for Hosts to discard any messages received without throwing an error. Link 191 is for IMP measurement. And the remaining links are for general purpose experimentation under the auspices of Cerf and the Network Measurement Center at UCLA.

I enjoy the editorializing here:

Lincoln Labs and MIT Project MAC gather their own sets of measurements independently from the Network Measurement Center, though this is more about tracking the usage in their corner of the network rather than any network-wide measurements. The group would like different hosts sites to standardize what they collect on their host, and participating hosts should provide this data on a well known socket (to be specified when the socket catalog is published). The data will be returned in a standardized format that is laid out in this RFC and contains daily aggregate data for the host about the number of bits sent/received, number of messages sent/received, and average round trip delay of messages. So the idea is that any curious researcher can get the aggregate stats from any host on the network.

Bob Metcalfe proposed a set of metrics that should be collected that would be useful “if Network connections were for sale as "off-the-shelf" items”. These are: capacity in bits/second, transmission delay, mean time between failure, and percent availability of a network connection.

Ellen Westheimer's series of manually produced biweekly reports on host connectivity is mentioned, and there is some discussion of automating this process and making the information available in realtime to people on the network, so that they don't have to rely on these reports coming in every two weeks. RFC-308 is mentioned as an existing example of automated report generation.

Postel and Cerf plotted Westheimer's data. The plot is missing from the canonical RFC that's available online, but I snapped this photo at the Computer History Museum: 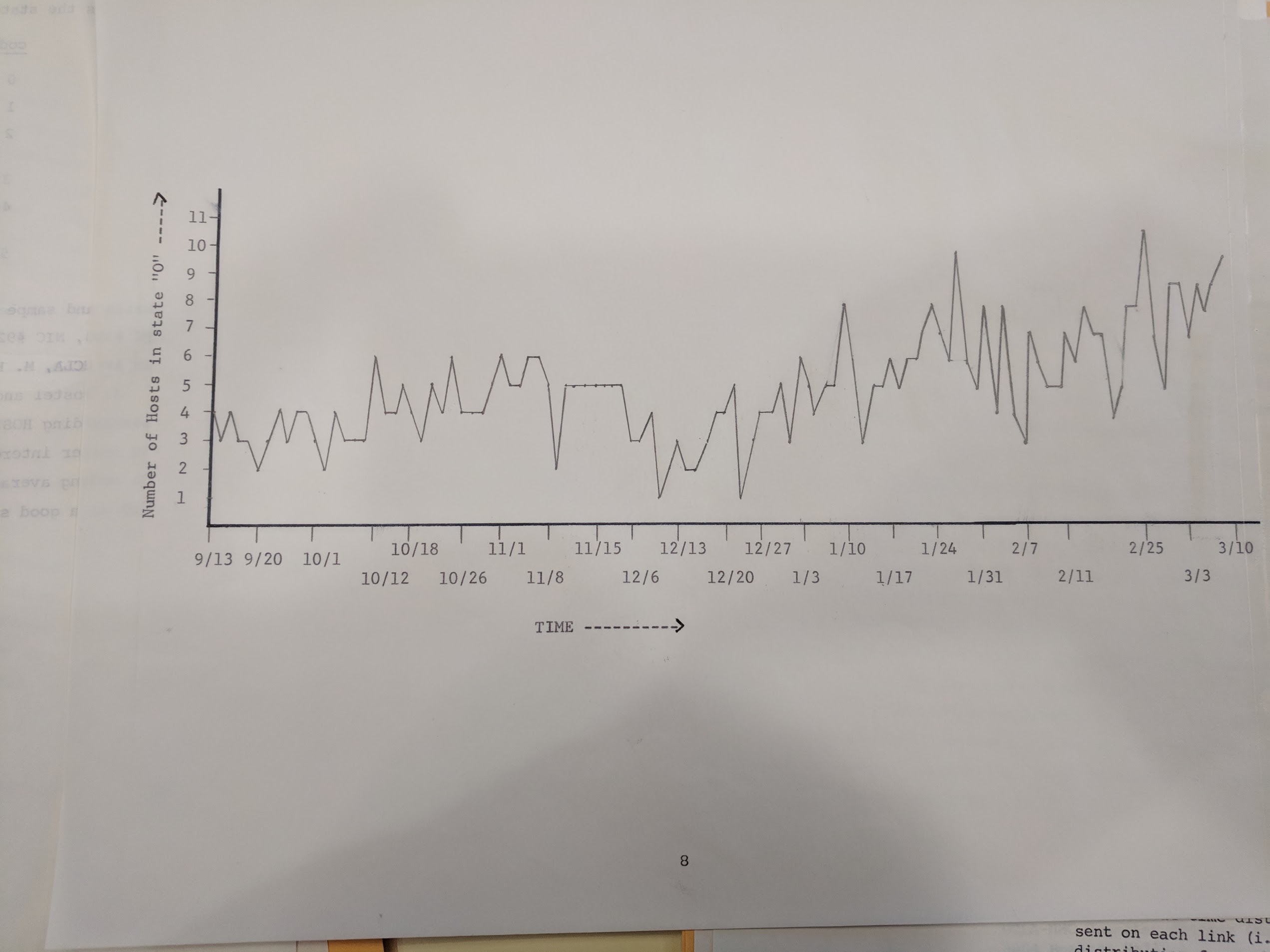 There is also discussion of how best to measure the efficiency and use patterns of a file transfer system.

They discuss an “artificial traffic generator”, which can generate fake traffic in order to stress test the network. There has been some work on this at UCLA and Lincoln Labs.