RFC-94 is titled “Some Thoughts on Network Graphics”, dated February 3, 1971. It's authored by Eric Harslem and John Heafner, the dynamic duo from RAND who have authored many RFCs to date.

This document is a reaction to Steve Crocker's RFC-86, which was a simple drawing format to send over the network. They like the proposal but think it needs to be extended to be able to support drawing more complex objects.

The detailed constraints enumerated in Note 86 restrict many interesting features of the Rand display hardware that we consider necessary (from a human factors standpoint) to some current applications. [...] For example, the point, vector, and character capability of Note 86 excludes line type mode, intensity control, and many other attractive control operations; the maximum symbol sizes are too small for our large character size; the origin of all of our symbols is specified as the “centroid” of the symbol rather than the lower left corner of a virtual rectangle encompassing the symbol; under mode control for plotting purposes, the beam may not be advanced to the next character position; a 7-bit ASCII is insufficient; etc.

They make a few suggestions for a network graphics protocol:

They then suggest a completely different approach to RFC-86:

An alternative approach is to consider the situation of communication between non-minimal nodes (nodes with substantial memory and computing power).

They also suggest a third network node that is an intermediary between the powerful graphical terminal a weaker terminal. This intermediary node would provide RFC-83 style data reconfiguration services and they tag this as an “essential part of this proposal”. Here's the network topology that they illustrate in Figure 2: 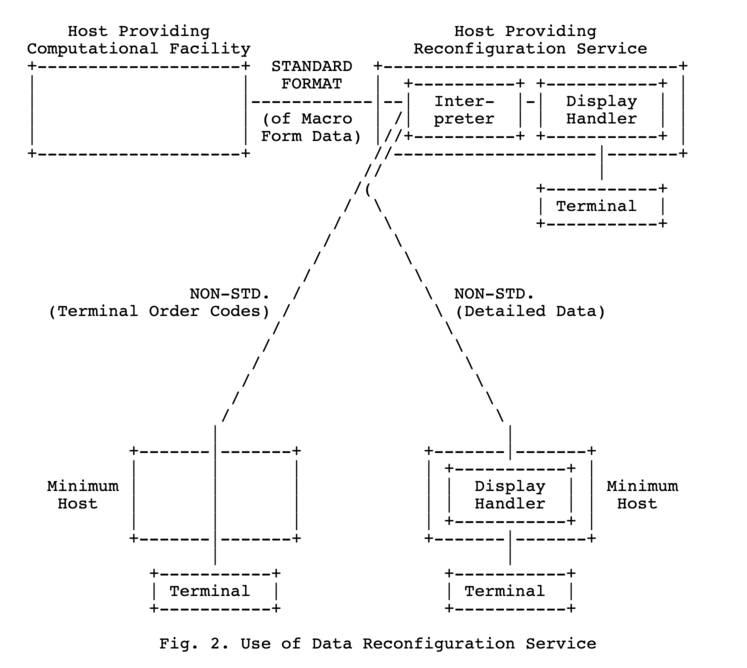 I don't like this proposal. I think it misses the point of having a minimal protocol with maximal compatibility. There should be a protocol like Crocker's, which then maybe has a higher level protocol on top of it that the big beefy graphics machines can use to talk to one another if they so wish. They also seem to be stretching to find uses for their data reconfiguration language. I actually really like their language but I think this is not the best place to push for it.

It also seems a little unnecessarily combative, to the point where they are missing details. I think they they missed the portion of Crocker's RFC which states that the NGLI would support primitives for intensity.

Anyway, Crocker's position is “let's crawl before we can walk and support a minimum set of maximally compatible features across the network”, whereas the RAND folks want their fancy features supported.