The quest for the best refill spool

(I refuse to call it the masterspool, because that's a terrible name for something named in 2018)

The idea behind this is to design a spool that can be 3d printed and then used with coils of filament you can buy from filament manufactures without a spool, thus avoiding shipping the additional weight and volume of the spool. By standardising on the dimensions of this universal spool, many filament manufacturers could provide identical coils all working on this spool and a ton of plastic for spools that can't be reused very well can be saved.

The actual implementation is pretty thoughful – the coils come with three zip ties and are supposed to be “mounted” onto the spools before these zip ties are removed so that you don't lose the structural integrity of the coil.

By now there are a couple of different designs for the actual spool, with the original and Das Filament's version being the most popular, I guess.

For me, these designs had a couple of problems – They take a lot of material and take very long to print (and my printer is currently in a slightly instable state making these kind of prints kind of tricky). Also, the design is rather large and just barely would fit on my print bed which is currently a bit smaller than the nominal 220x220 due to BuildTak not being widely available in that format (what's up with that, btw.?)

Looking for alternatives, the first thing I tried was Das Filament's Little MasterSpool and it sorta kinda works, but the missing outer rim makes this kind of spool very prone to tangling up filament on the side of the spool and I lost a print to this when I left it unattended so that was not going to work for me. 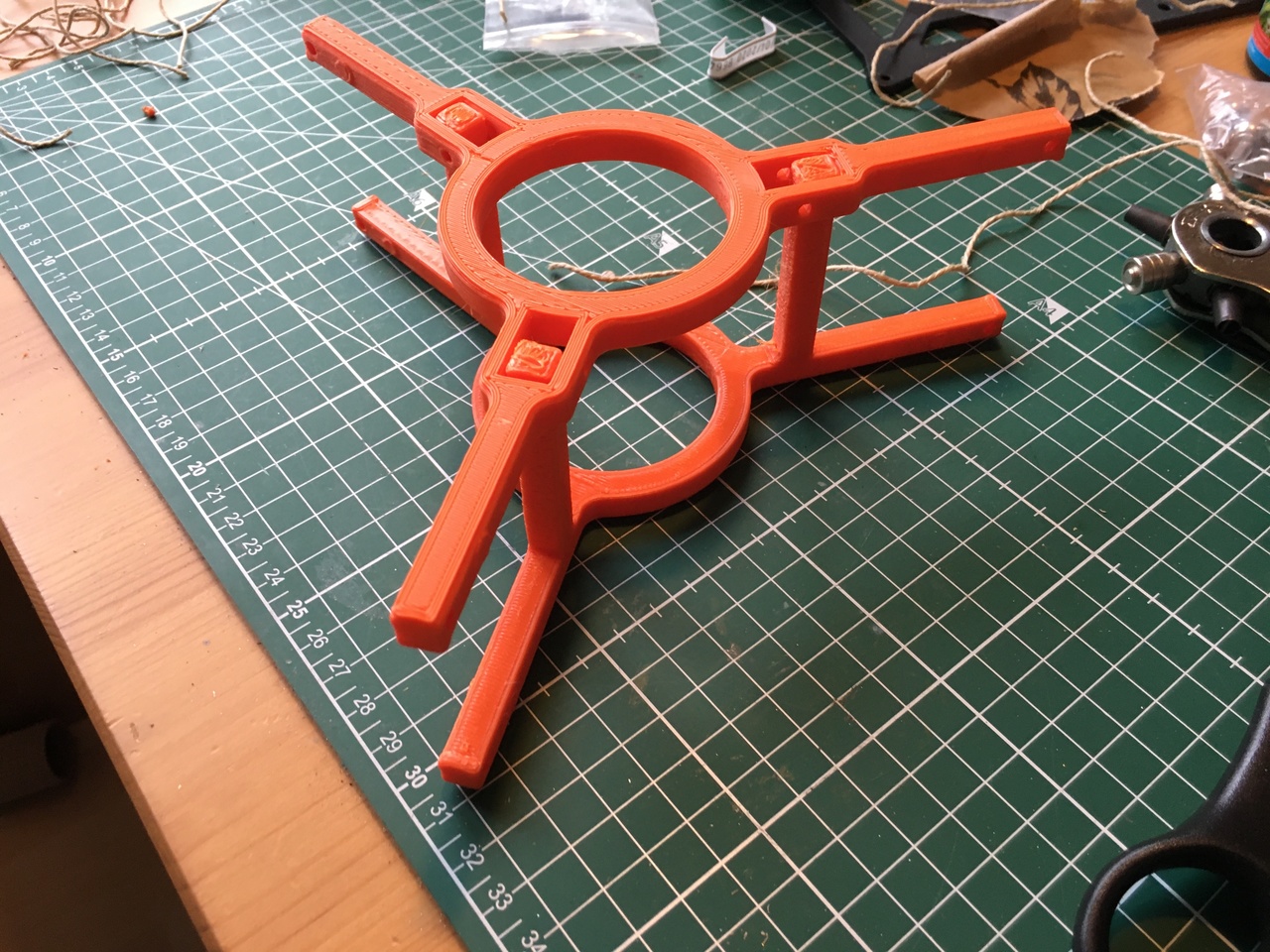 Upon further research I stumbled across the EcoRefill spool by Creative Tools which uses a rather clever approach: You simply print the core of the spool (maximum diameter a little less than 11cm) and then use cardboard (the idea is that Creative Tools' refill spools come in a cardboard box that have a template printed on them so you can cut it out from there). I did struggle a bit with the print settings for the spool (I told you my printer is a bit unstable) but after I managed to get both halves printed (and repaired with a hot glue gun), I now could finally transfer the spool from the minimalistic skeleton to a proper spool with proper side walls. The two spool cores are held together by zip ties and the spool core does have slots where the original coil zip ties go.

To cut out the cardboard spool sides, I used compasses to draw two concentric circles (51mm and 100mm in radius) and then cut them out with a standard cutter, but scissors would also work. Alternatively, use your drawing program of choice and print a template. The inner diameter needs to be somewhat precise to properly (and somewhat tightly) fit on the spool cores, the outer diameter can be fit to your needs and your spool sizes. Just have enough overhang so that the sides guide the filament to keep it from tangling.

One suggestion I have, though: I know we all love zip ties and they work great, but you know what also works: twine. I have some jute twine (close to what I believe is called bakers twine or sausage twine) which can be bought in drugstores and even supermarkets which worked fine both for securing the coil during the transfer (mimicking the three zip ties) but also for binding the two cores together. This twine is definitely properly biodegradable and additionally, if you know how to tie the proper knots, reusable. 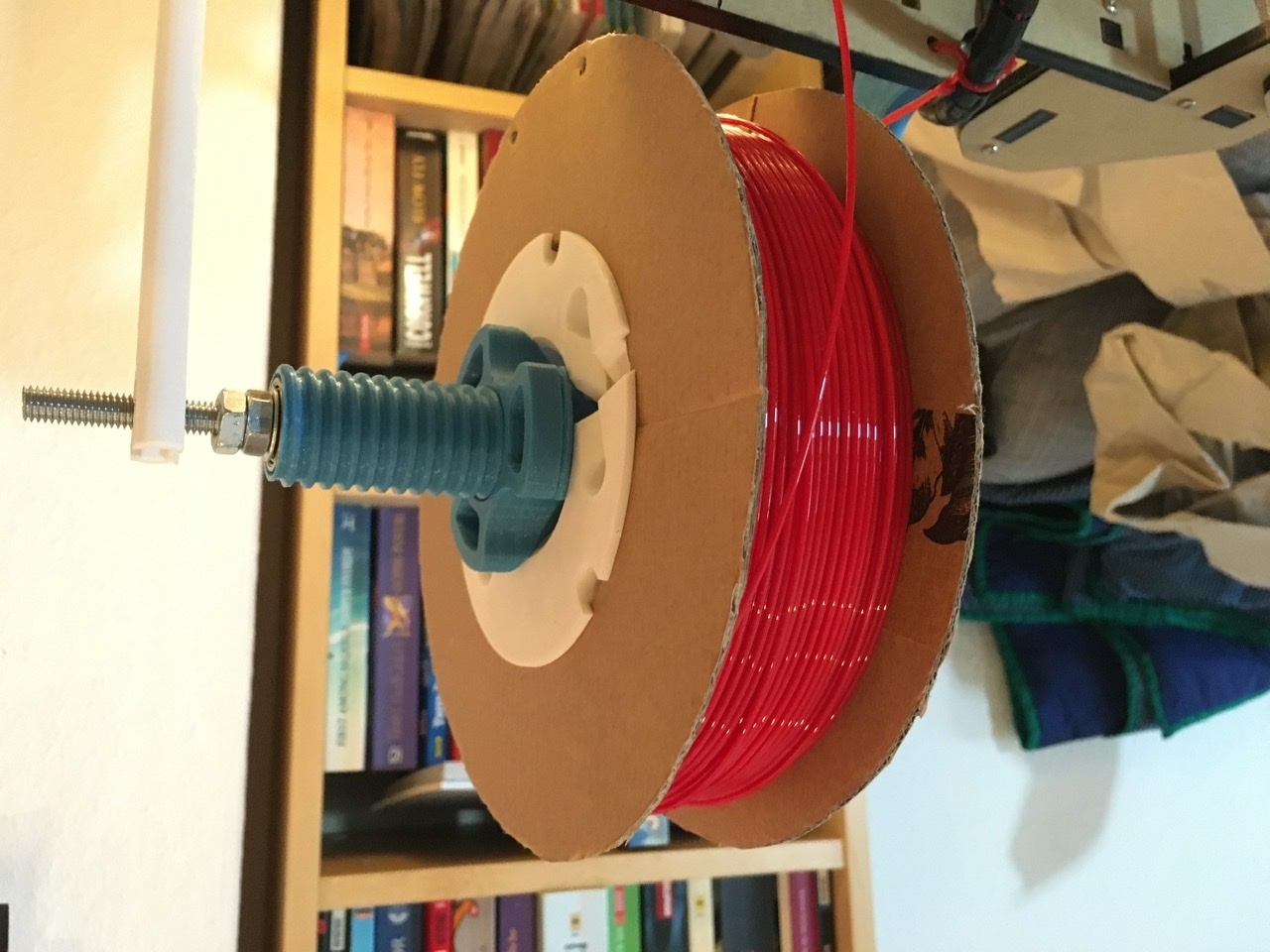 A note on available refills

While the refillable spool concept definitely is a great idea, the market doesn't seem to respond too well. You should be able to find manufactures that do refills in your region, but they are few and far between. I am very lucky that Das Filament seems to be still very committed to the idea and their prices with german shipping fees are quite good for both PLA and PETG (the two filaments they ship as refills). Other notable manufacturers are Fiberlogy from Poland which can be bought via 3djake (my 2nd go to place for filaments, as they have one of the largest selections) and before mentioned Creative Tools. For other regions, you may be able to find manufacturers and resellers on the filament directory.

After figuring out the initial problem with my base plate, I figured I could go all in and design a full housing. After wresting a bit with Fusion's components which I think I still haven't fully figured out, I printed a second try of the bottom half of the case to see if I correctly measured all the holes in the walls. This time, I ran into other issues:

The case in the picture is intentionally destroyed to check the clearance on the bottom... 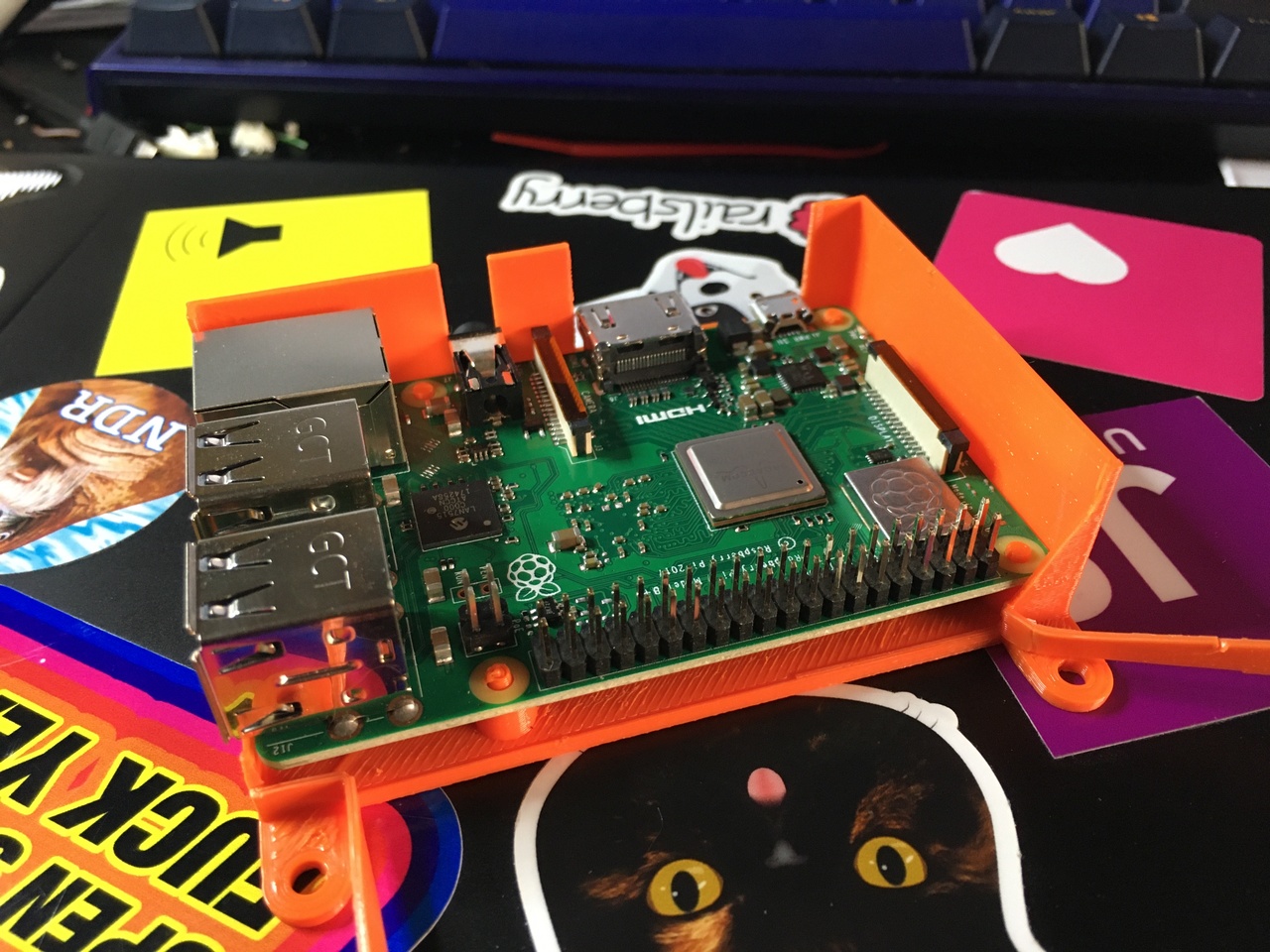 Also, I finally figured out (doh!) why my Das Filament filaments who have been printing wonderfully using the old Anet A8 extruder hotend have been stalling and clogging using the theoretically superiour Hemera extruder/hotend I installed recently. I haven't been measuring it in lack of a proper thermometer but my theory is that the old A8 thermistor was way off and so the hotend was about 10-15 Kelvin (yeah...) hotter than it should be which lead me to reduce the temperatures for certain filaments in my printing profiles. After raising these temperature significantly, both my Das Filament PLAs print properly again. Bit of a facepalm there.

Which makes me think that I should probably spend some time dialling in my filaments a bit more.

No idea why I thought that this was a good idea, but none of the raspberry pi cases with screw mounts (mostly vesa mounts, for obvious reasons) work for me. Most of them are made for imperial screws and sorry, that's not gonna happen. Also, most of them make you screw in the Pi into the case which is completely unnecessary if the case design is correct.

So today I did a first test by taking the official mechanical drawings and creating a sketch in Fusion 360 (Side note, I really want to learn FreeCAD, but every time I try it I get stopped by something that is just super easy in Fusion...) for the bottom half of my case (in fact, for now, just the base plate with the mounting points) to see if my assumptions on the drawings are correct.

A couple of points to note after printing it and testing it with my OctoPi:

Here's what this first test actually looks like after printing: 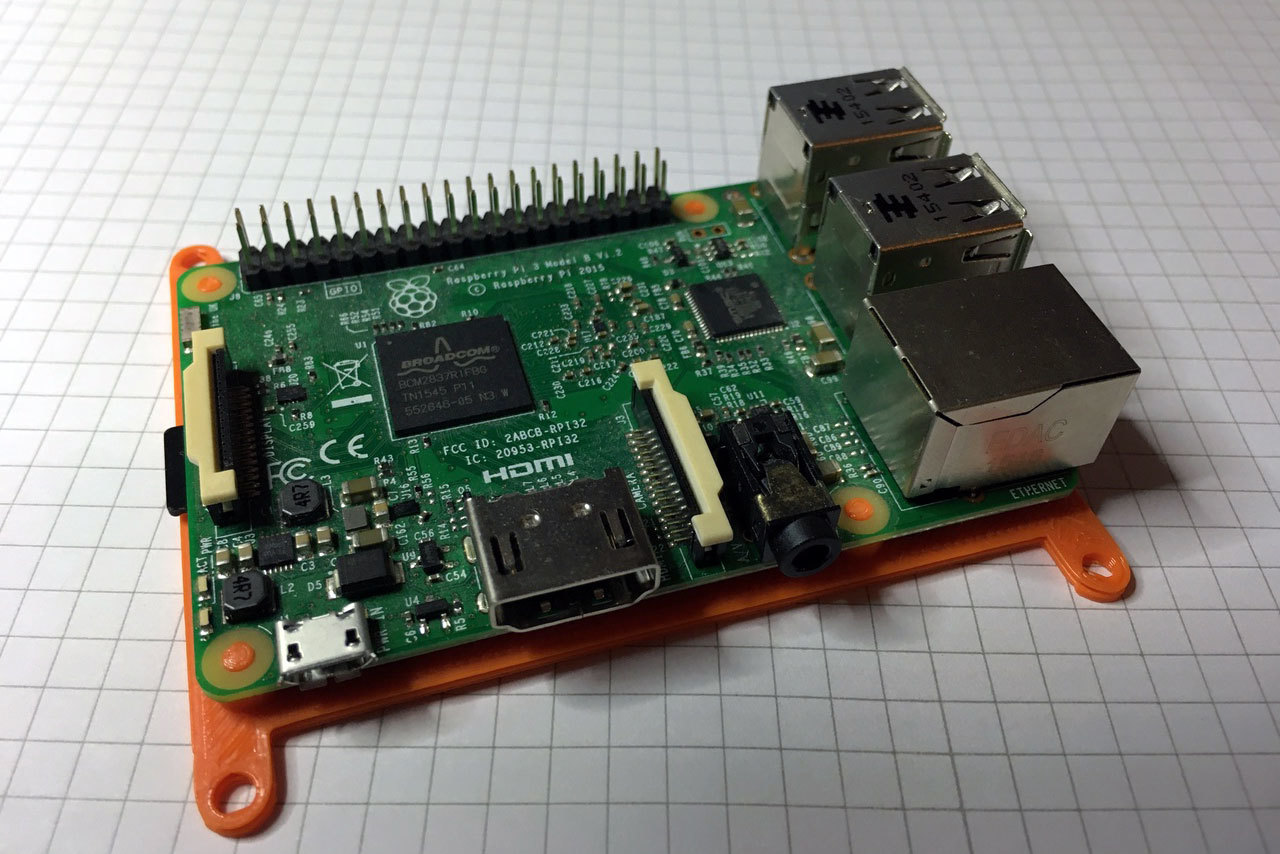 Back into 3D printing

After a long hiatus I finally dusted off my 3D printer today and started working on a tiny project. I have a trailer for my bike, a Burley Flatbed, that, as mandated by germany's road code, needs a couple of reflectors and lights. On my first ride with the trailer, an asshole kicked off one of the reflectors while it was parked while we went shopping. Nice! I tried to buy replacements, but unfortunately, these are a bit hard to get as the diameter of the tubing used for the burley is rather small compared to normal bike tubings. I also have an old battery light lying around here, with an integrated reflector that would fit the trailer pretty nicely, but the clamp can only clamp a minimum diameter of maybe 31mm, which is pretty far away from the 22mm of the Burley tubing.

If you don't have a lathe, this is a pretty nice task for a 3D printer. I started of with a rough sketch of an idea and then briefly tried to start modelling it in FreeCAD before closing it again and starting over in Fusion 360. I really would want to work in FreeCAD, but this needs more work from me in form of learning how to properly use it. 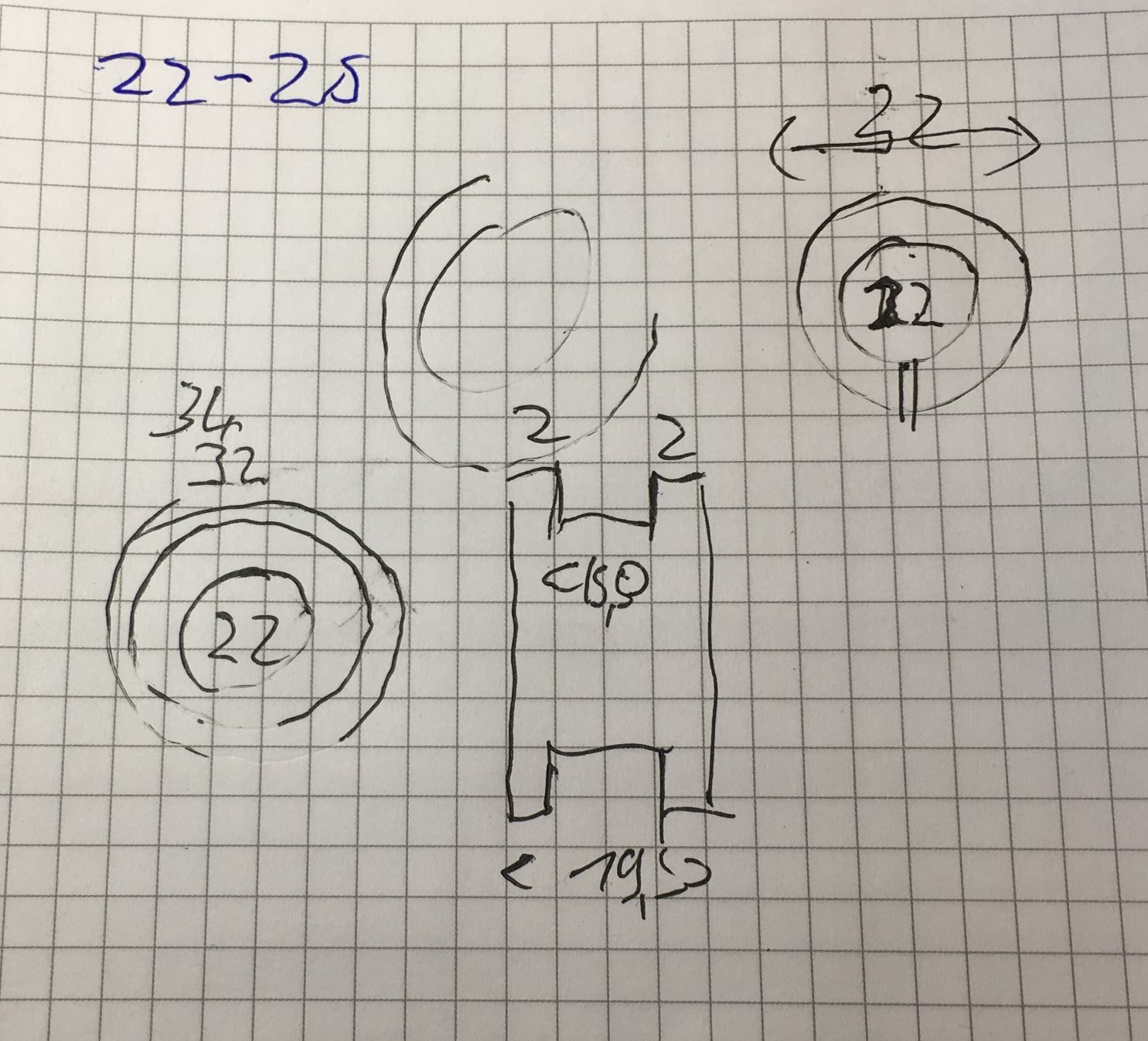 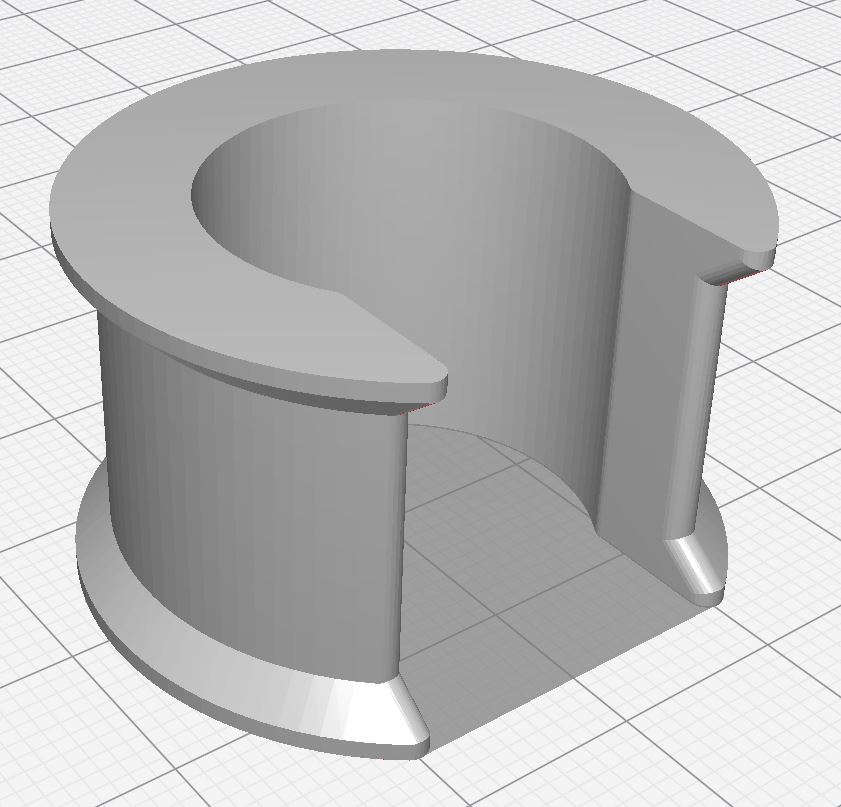 Before I arrived at this version, I actually did another version (and, stupidly, printed it as well), which you can see here: 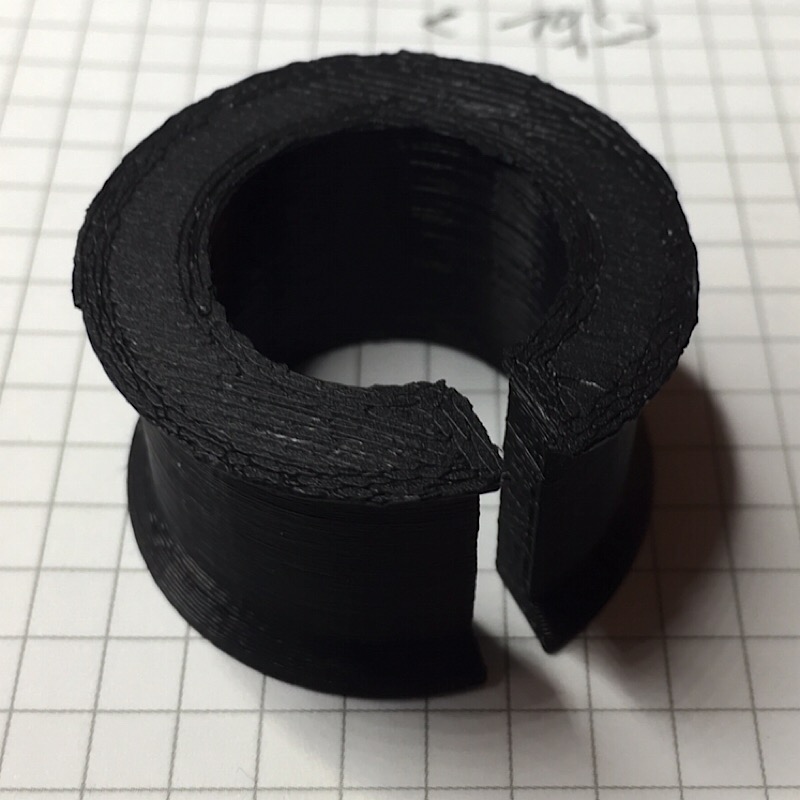 I wonder if you can see what's wrong with it. :)

I had to print this 4 times before I was satisfied. It went like this:

Designing for a filament printer.

If you look at the initial sketch and the resulting part, you'll notice that not only did I have to change one important part of the design (the opening), but also I turned what were hard overhangs on the initial design into tapered edges. This is actually not for aesthetical reasons but done to be able to print without support material. A filament printer can print overhangs just fine without support if the angle is doable. I chose 45° and that is more that enough for making this a printable part. The problem with support is that not only does it waste material, but also makes it much harder to clean up the part afterwards.

If you're interested, the used material is Refil's awesome ABS which prints really well (granted, it's a small part so I probably shouldn't be worried about the usual ABS warping) and is hopefully a bit more resistant to wear, tear, sunlight and temperature changes than your average PLA (unfortunately I don't have any PETG in enough quantities lying around). The cool thing about Refil's filaments is that they are all made from recycled plastic, in the case of ABS from old car dashboards, which I though was especially fitting for my bike trailer, which, since I bought it, saved me many a car rides. It does come with the usual fumes of ABS and I'm still trying to get this toxic stench out of my flat, but it's a pretty cool material nevertheless.

I'm still pretty much a n00b in 3D printing but small projects like this are easy enough and are always fun, as you can get your results pretty quickly.