Question 2: Would you like to be famous? In what way?

I care more about being liked than I let on, more than I even admit to myself. Sometimes I feel like I'm performing this personality because it's the adaptation that won the popular vote after years of acting out relative failures. As if affection is transactional and I can only acquire it after putting on a show.

A) I don't want to be famous. My instinct for self-preservation tells me I should be averse to it. I hate the idea of a spotlight landing on my faults, exposing me.

B) I would like to be famous. I like how fame could mean having the affection of a big group. I want to be liked strongly enough that people would be willing to take on my mean streaks, hypocrisy, long silences — and still choose to stay.

C) If I'm going to achieve celebrity-fame for anything, I want it to be a result of having mastered something and earning respect for it. 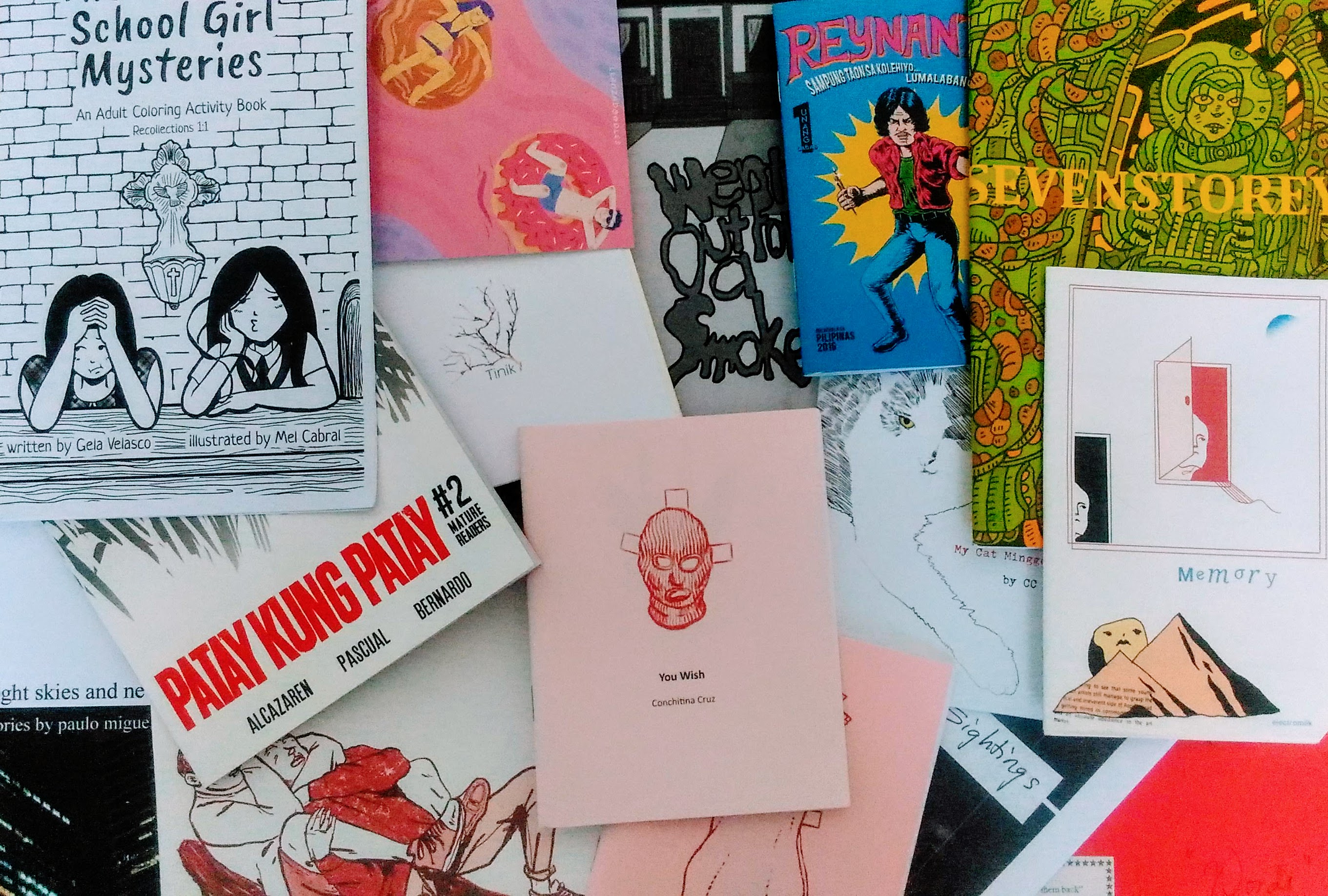 After two years of saying I'd go, I finally went. BLTX was a lot more crowded than I thought it would be. The zine fair was held at Sikat Inc. along Tomas Morato on a cool Saturday evening.

That same Saturday I was on the second day of my period, fatigued from an overnight Christmas party, and scared shitless of going out. The recent wave of kidnapping stories has had me clutching a pepper spray like a rosary. I almost want to run screaming back to the Catholic church for divine protection.

But yes, I dragged my terrified, painkiller-laced ass to Quezon City. I ended up cashing out of an ATM twice (it was conveniently across the street from the event space) and my fatigue definitely got worse the next day. 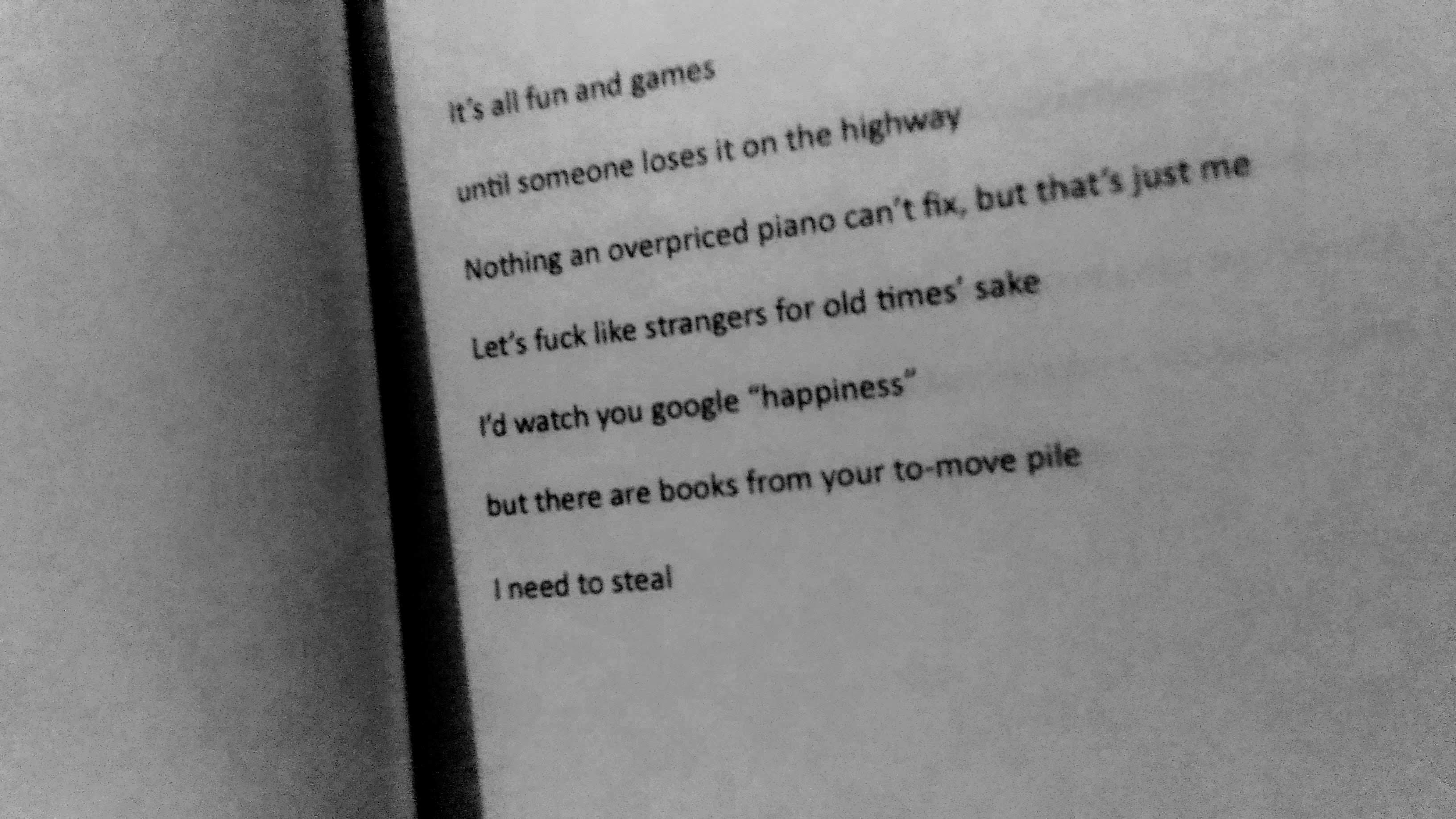 From “You Wish” by Conchitina Cruz

It wasn't all because of FOMO. What happened last Saturday was a trade-off. Showing up at the event had higher value so I gave up the relative safety of staying indoors. As Thomas Sowell put it, “There are no solutions, only trade-offs.”

I've been swiping my “next time” card as if I wouldn't have to pay for it with my life. Something's gotta give. I want to keep being human. 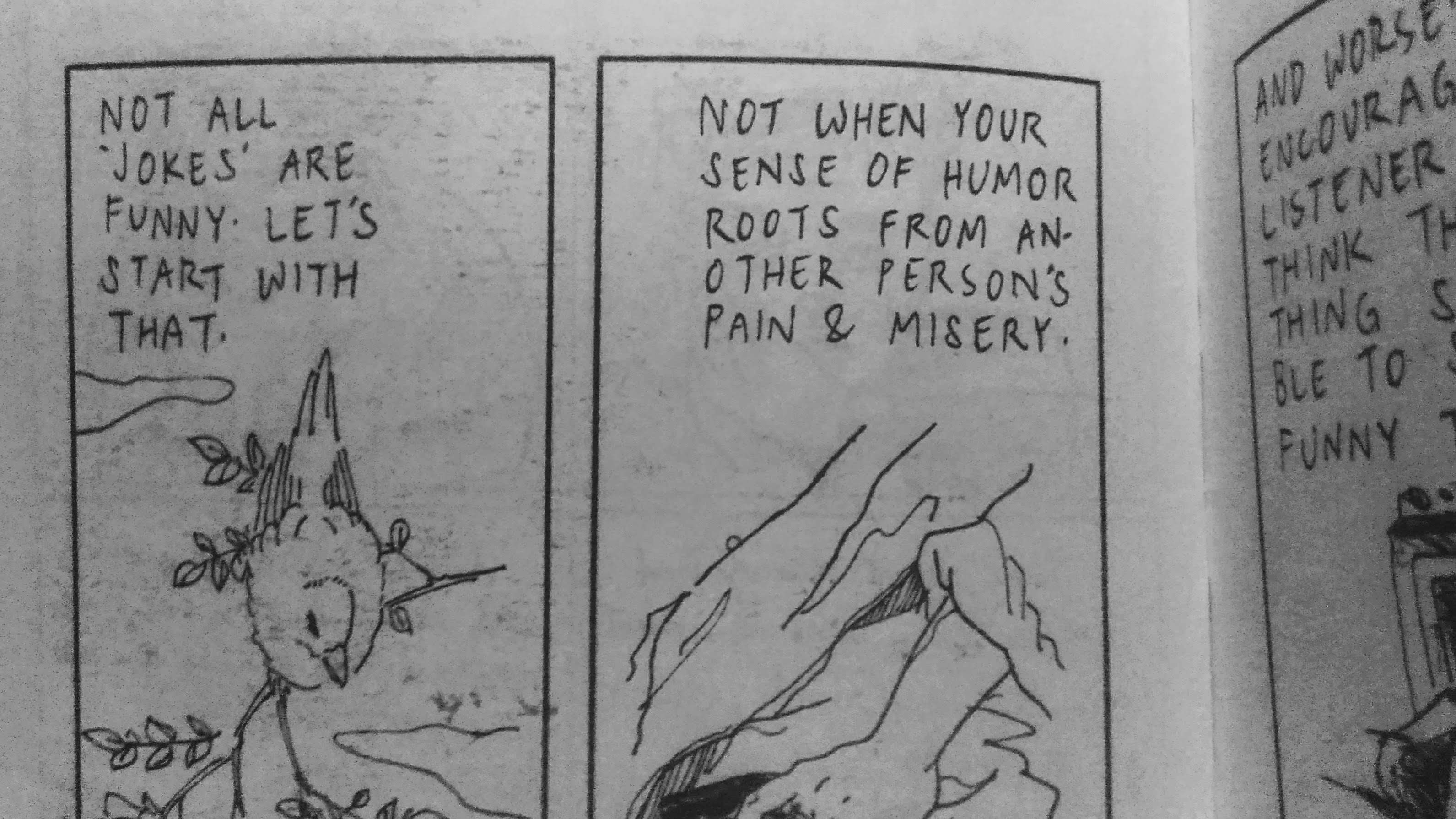 From “Soundless Crying” by Electromilk

I started running and writing in a journal because I was angry. Rage was eating me from the inside. I had been simmering even before she raised her voice at me and asked me not to tell. It was her anger management problem, she said. I never took the red flags seriously until they led to a casualty. One person fell. The fallout spread faster. Old biases remained in her favor. I kept running.

I would only get my back pay two months later, but I didn't know that then. My attachment stemmed from other things. Conversations with common friends were continuations of conversations we've always had. Fanning old flames kept us steamed. The heat would only evaporate from our system much, much later, but we didn't know that then. For months, it felt as if I never left.

First the reading plan and now this? Yes, pretending I can draw lines around the intangible (learning, rest) makes me feel like I'm in control of my life.

It's the first time in a while that managed 7 uninterrupted hours of sleep so I thought I'd commemorate it here. I slept well, hooray! What an achievement.

Yesterday, the 1993 rape-slay of Eileen Sarmenta resurfaced in the news. It was reported that Antonio Sanchez—the ex-mayor convicted of her rape and homicide, and sentenced to nine terms of reclusion perpetua—is set for possible release within two months. He has spent a total of 24 years in prison—336 years short of his sentence.

The details of his crime are gruesome. After raping Eileen, he handed her over to six other men to be raped again. The amount of semen collected from her body could fill a can of sardines. Eileen was shot in the face with a baby ArmaLite; her boyfriend, Allan Gomez, was tortured and shot to death. Two years prior, Antonio Sanchez also masterminded the murders of Nelson and Rickson Peñalosa, allies of his political rival.

His crimes didn't end there. In prison, he smuggled P1.5 million worth of meth hidden inside a Virgin Mary statue. Being a “devout Catholic” his cell was covered in religious paraphernalia, but it did nothing to conceal his flat-screen TV, air conditioner, and refrigerator when they raided Bilibid in 2015. There are rumors that he's been sighted out of prison for months. The Sanchez clan still benefit from a modicum of political power in Laguna.

This living rot is set to be released in two months' time for good behavior, because of a law that further reduces prison confinement based on an inmate's good conduct. Law good, application bad. It gets worse: Some senators are exploiting the controversy to justify the death penalty bill.

I activated my Twitter account to peruse the public discussion. Naturally, that only made my headache worse. The Amazon is on fire for fuck's sake, and Bolsonaro is pinning the blame on NGOs. A kid in Catanduanes is suffering from a fractured skull inflicted by bullies. Duterte wants to increase his intelligence fund by 2 fucking billion. The Hong Kong protests. Incompetent senators are pro-ROTC and anti-SOGIE.

It's too much. I've been crying on and off yesterday and today.

I know the world's authoritarians have been known to inundate citizens with vitriol, to divert the heat away from their more sinister moves, but these aren't even cover-ups anymore. These are just major fuck-ups, one after another. How does one build up emotional stamina for too much?

One history lecture, one stage play, one coffee workshop, and one grant proposal writing course⁠; my last payout has afforded me these out-of-apartment activities that I'm hoping will inspire something other than myopic introspection. If I'm lucky, I'd end up embarrassing myself in front of some industry hotshot and have plenty of material to cannibalize here on my blog.

There's one more interesting activity from Meetup.com, but I'm still undecided on whether I should participate. Rappelling off a 700-foot mountain sounds exciting, but doing it for the first time with perfect strangers might be two notches too dangerous. I can invite friends, but how do I even broach the subject? “Hey girl! 😜 Wanna forfeit your life? 👻”

But first things first: I should sign up at a rock climbing gym to check if I'm even cut out for this kind of bondage sport. I really want to go rappelling, to be honest. Everything else I signed up for are too city-bound, too potentially superficial; too much consumption and too little action.

But who knows? I could be wrong or I could end up embarrassing myself.

You can tell a lot about a person by their bookshelf. What's embarrassing about mine is that I never finished reading 83 of the books in it.

Here's all of them in a spreadsheet. It's both a sobering reality check and a reading plan. The idea is to read through it one row at a time, left to right, one title a week. The genres are spread out so it's a different experience per book as much as possible. Breadth over depth.

At first I thought of doing a deep-dive into books that would expand my understanding of sociology. This was pretty short-sighted considering how my interests and the way they manifest in my life are always changing. Each one of these books topped my priority list at one point or another because of things that came and went in my life. I'm interested in all of them. Besides, I'm not going to last on the depth plan. One serious book after another would be too repressing and I'm already repressed in more ways than one.

Assuming everything goes well, I'll finish the spreadsheet by March 2021. It's sobering to know it'll take me a year and a half to read all the paperbacks I've hoarded, but that's not what woke me up. It was the precarious piles on my work desk. The pell mell on my divan (a storage divan that also has books inside it). The random books I have to sleep next to on my bed. The amount I own is oppressive in a micro-apartment.

I've always known I had a lot, but now I have the weight of 83 unfinished books on my mind. 83 is not a lot, it's excessive.

Now on to The Power Broker.

1: If you could invite anyone in the world to dinner, who would it be?

Stephen Fry. I recently came across a Graham Norton clip, where Stephen Fry's anecdote was about a surprise New Year's visit from Prince Charles and Princess Diana. He just had some friends over, his house was messy, and he mentioned Hugh Laurie had to hoover his place.

House? Hugh Laurie? Hoover? I consulted Google. I suppose all the Brits know “Fry and Laurie” are two parts of a cute comedy duo. (To hoover means to vacuum!)

Every time I encounter Stephen Fry, he's doing something different. He's writing a book about Greek gods here, acting in Love and Friendship there, he's delivering a statement against political correctness elsewhere. Hear him out:

He also said this:

We are not nouns, we are verbs. I am not a thing – an actor, a writer – I am a person who does things – I write, I act – and I never know what I am going to do next. I think you can be imprisoned if you think of yourself as a noun.

Maybe it's the freedom-lover in me, but I admire people who follow through on everything they're interested in. These people are smart, interesting, not bound by generic assumptions, willing to be wrong. I love all that in human beings—and I romanticize the hell out of them. I would invite Oliver Sacks, too, if he were still around.

Just kidding. I'll invite Conan O'Brien because I'm one of his a trashy flailing fan girls. To my two friends reading this blog: I just didn't want to give you the satisfaction of knowing the answer.

My writing's been so stiff lately, I get cramps reading it.

It's natural to recognize mistakes in the text while re-read⁠ing—that's what editing is for. I also consume a lot of Emily Nussbaum, Megan Garber, etc., so I have a general idea where my frustrations on quality are coming from.

But none of that changes the fact that I neglected writing regularly for so long. All because I suffer from a condition where attempts at writing summon the “ghost” of the elusive perfect piece. It's an illusion that tells me I should achieve perfection, but everything I do will be less than. The ghost renders me too spooked to function.

On good days, the paralysis is surmountable and I remember the whole point of writing is to find a way out of not-knowing. There's comfort, too, in knowing no writer has ever said exposition is easy.

The difficulty is part of what pulls me out of my navel-gazing trances. I'm forced to slow down when I write. My ideas make perfect sense inside my own head because they're attached to context forged by my personal experiences. But when they're out of range, on a computer screen, they have to stand on their own and make sense to other people.

I usually catch my pretensions and faulty reasoning on a published post precisely because it's a detached space. Thank god for the edit button.