in praise of MiniDLNA

Five years ago, I purchased a Roberts Digital radio for the kitchen. Mainly to listen to the radio but also this device could play music from Spotify, a USB stick or act as a UPNP client.

As I already had the Plex Media Server set up which had a DLNA option, this looked attractive. The setup worked pretty well apart from one minor glitch.

And, like a dripping water tap, or the endless, harrowing screams of a baby played on a tight loop in an American interrogation facility, any minor technical glitch can't simply be ignored.

The cover art didn't display. I'm not sure why I believed that cover art should be displayed. Maybe it was because it was displayed in other music players or on the glossy Roberts Web site.

I tried everything, well a couple of things, to try to resolve this. I meticulously downloaded cover art for more than 200 albums and uploaded them to the appropriate directory as 'cover.jpg'. Or maybe it had to be 'folder.jpg'. Or 'Folder.jpg'.

No change. Still no cover art. I researched further on the Plex forums and any other DLNA/UPNP site I could access. I think the only solution I discovered was to embed the cover art image in the FLAC file but that was a lot of work, didn't feel right and would bloat the size of the lossless music files needlessly.

No cover art. After a while, I was forced to let it go. The digital radio played my music, the wife was pleased and that was the main thing.

Until yesterday, when I was busy shaving yet another shaggy haired yak and immersing myself deep down in yet another rat-hole that was actually a million miles removed from the original task in hand – to quickly experiment with the i3 tiling window manager.

I wanted to use a dedicated music player for radio and music rather than use a Web browser. Maybe I could even display 'Now playing' on my i3 status bar. VLC could access my music on the Plex Media Server but Rhythmbox (my preferred media player) couldn't. I played around with Music Player Daemon (MPD) and about 57 different GUI and command line MPC clients. While doing so, I noticed that MPD doesn't necessarily need access to local music files as it has a UPNP plugin.

My joy was short-lived as this didn't work. It could see the Plex Media Server (just to get my hopes up) but couldn't stream any music. Just like Rhythmbox. Which started me thinking. Maybe it was the server software not the client. So, I decided to waste a little more time by installing MiniDLNA (now ReadyMedia) which is a simple, lightweight, OpenSource media server on my FreeNAS.

This software was trivial to install on FreeBSD and I had successfully configured it within five minutes. Finally, I was playing music in Rhythmbox using UPNP. Mission accomplished. Pat yourself on the back and finally put the kettle on.

However, when I was in the kitchen, filling up the kettle, I couldn't resist the temptation and tried the Roberts Radio to see if it also recognised the new UPNP server.

Not only did it recognise it, it also manage to rapidly browse my music by Artist, by Album. Probably confirmation bias, but it seemed quicker than Plex.

More importantly, it actually played music – complete with cover art. Golly, I am so happy I have organised a socially distanced dinner party in the garden.

Of course, we won't be eating anything – just sitting around the table gazing at the unadorned beauty of the Roberts Stream 93i and taking turns to choose a song. 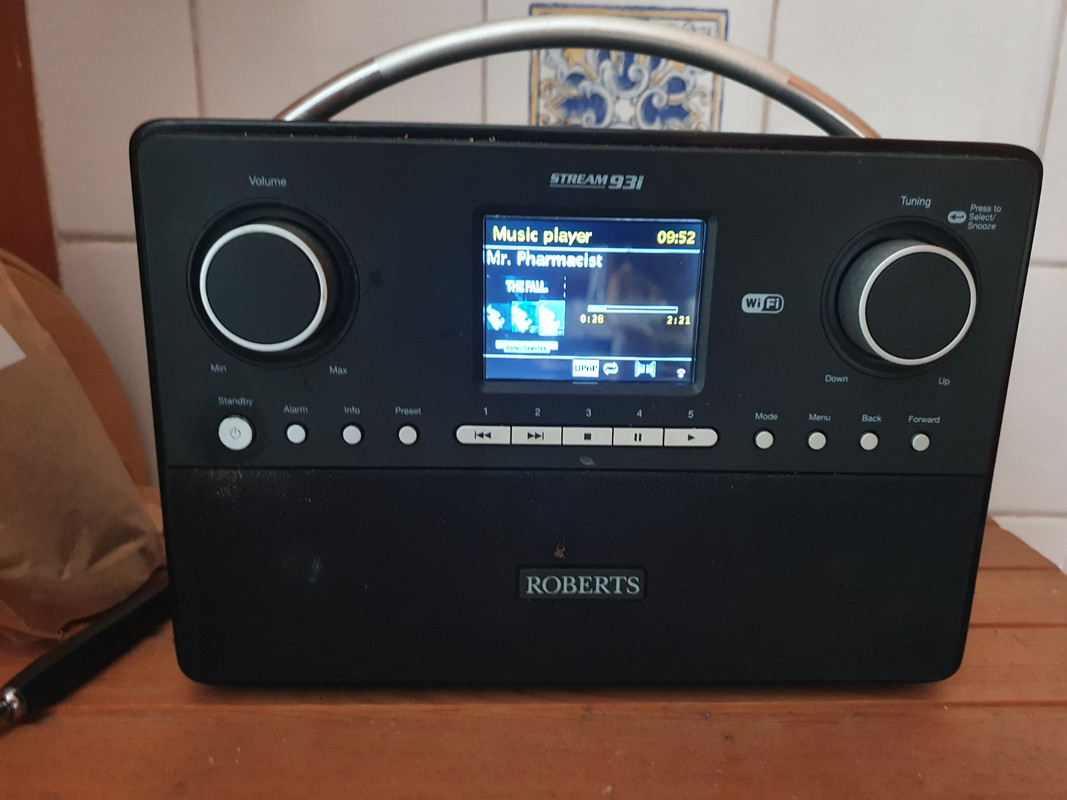