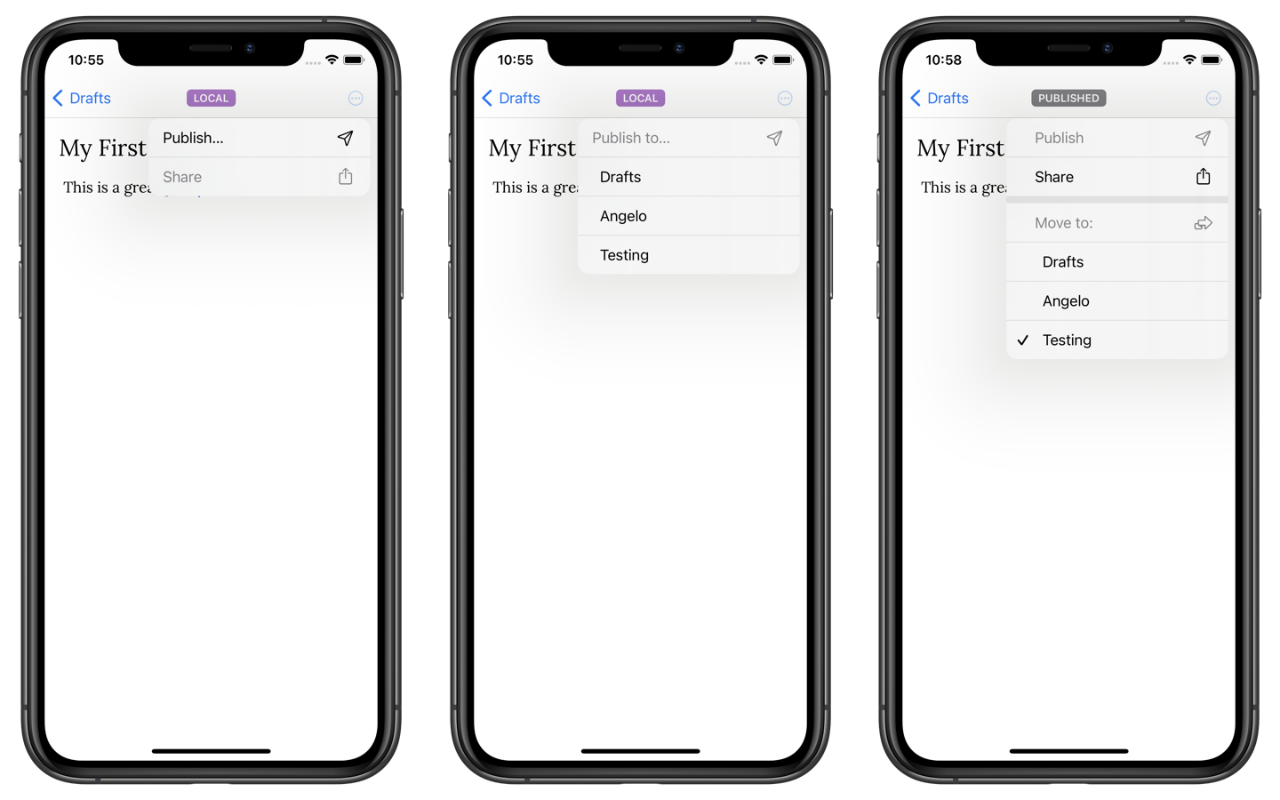 One week ago, I announced the first public beta of the WriteFreely iOS app. Thanks so much for all of your feedback! Since then, I’ve been busy collecting your bug reports and feature requests, and I’m happy to announce that a new build is now available on TestFlight. Let’s dig in to what’s new!

If you’re interested in testing the public beta, that’s wonderful! However, please keep in mind that this is pre-release software, and so we recommend you use it on a test account where you’re not concerned about losing your work. We’ve taken precautions to prevent data loss, but as the cartographers of yore used to say: here be dragons.

With that out of the way, let’s get to the good stuff.

The first change is that any new post is created as a local post in your Drafts. Previously, if you were viewing the posts in your My Cool Blog collection, creating a new local post would place it in that collection; now, no matter what you’re looking at, it will always end up in Drafts. This makes the button’s behaviour easier to understand — no having to guess where the new post you created ended up.

The biggest change, though, is that you can now move posts between your Drafts and collections. I’m personally pretty excited about this, because it wasn’t even in-scope for the first release. But we got it done, and I’m really happy with how it works!

There are three parts to this feature.

First, the Share and Publish buttons in the post editor have been moved under a single Menu button. Tap it, and you’ll find a few actions you can take on the post.

If this is a local Draft, tapping the Menu button presents two options: Publish… and Share. The Share option will be disabled, because the post is local — you can’t share a link to something that’s not live on the web, after all.

Tapping the Publish… option presents a submenu asking you where you’d like to publish the post. Choose the blog you want the post to be a part of (or Drafts), and it’ll be published there!

If you’ve got a published post loaded in the editor, the menu is a little different. You’ll still see the Publish and Share options, but below that you’ll also see a list of your blogs. Just tap the blog you want to move the post to, and the app will send the request to the server for you.

Thanks to your testing, the app is now better behaved:

You may run into the following issues when testing the app:

If you’d like to test the app, you’ll need three things:

We’ve set up a page for sign-ups with a link to the TestFlight build. Tapping it on your device will open the TestFlight app, and you simply need to confirm that you’d like to accept the invitation to test.