McDonald's For a Week

I watched Morgan Spurlock take on his Super Size Me challenge many times growing up. For some reason, seeing him struggle to only consume McDonald’s for an entire month always captivated me. Spurlock finding something he’s curious about and experimenting even when people don’t quite understand why is something I really admire. And because I recently moved across the street from a McDonald’s, I decided I would do my own mini Super Size Me challenge.

I was pretty excited for this challenge as I’m not a regular McDonald’s go-er. Before moving so close to a McDonald’s, I only went around twice a year to get some chicken nuggets or fries. My “McIgnorance” made me look forward to seeing what made McDonald’s such a powerhouse in the fast food industry.

I started the challenge with similar rules to the ones in Super Size Me, but on a smaller scale: for one week I would eat only McDonald’s. I figured a whole month was way too long to keep me interested and motivated. But half way through the challenge, my body wasn’t liking the lack of fruits and vegetables, and so I had to change the rules. Instead of three meals, I did two meals of McDonald’s per day with a supplemental non-Mcdonalds meal. Remember, I’m not a hardcore investigative journalist like Spurlock, just a curious programmer looking to spice his life up for a week.

It’s also important to note that I did this challenge during the Coronavirus Pandemic. During this time McDonald's reduced their menu. This limited my choice for meals to either be a burger or something fried (or a dessert if I was feeling wild).

Throughout the experiment I tracked all the nutrition information, money spent, and trash produced.

I tracked my nutrition easily using the McDonald's Nutrition Calculator. On a regular two-meal day, I consumed on average just over 1600 McDonald’s calories. With that, I normally capped out on my recommended saturated fat and sodium intake for the day. I was almost always lacking potassium, dietary fiber, calcium, and vitamin D, which my non-McDonald’s third meal of the day helped supply. 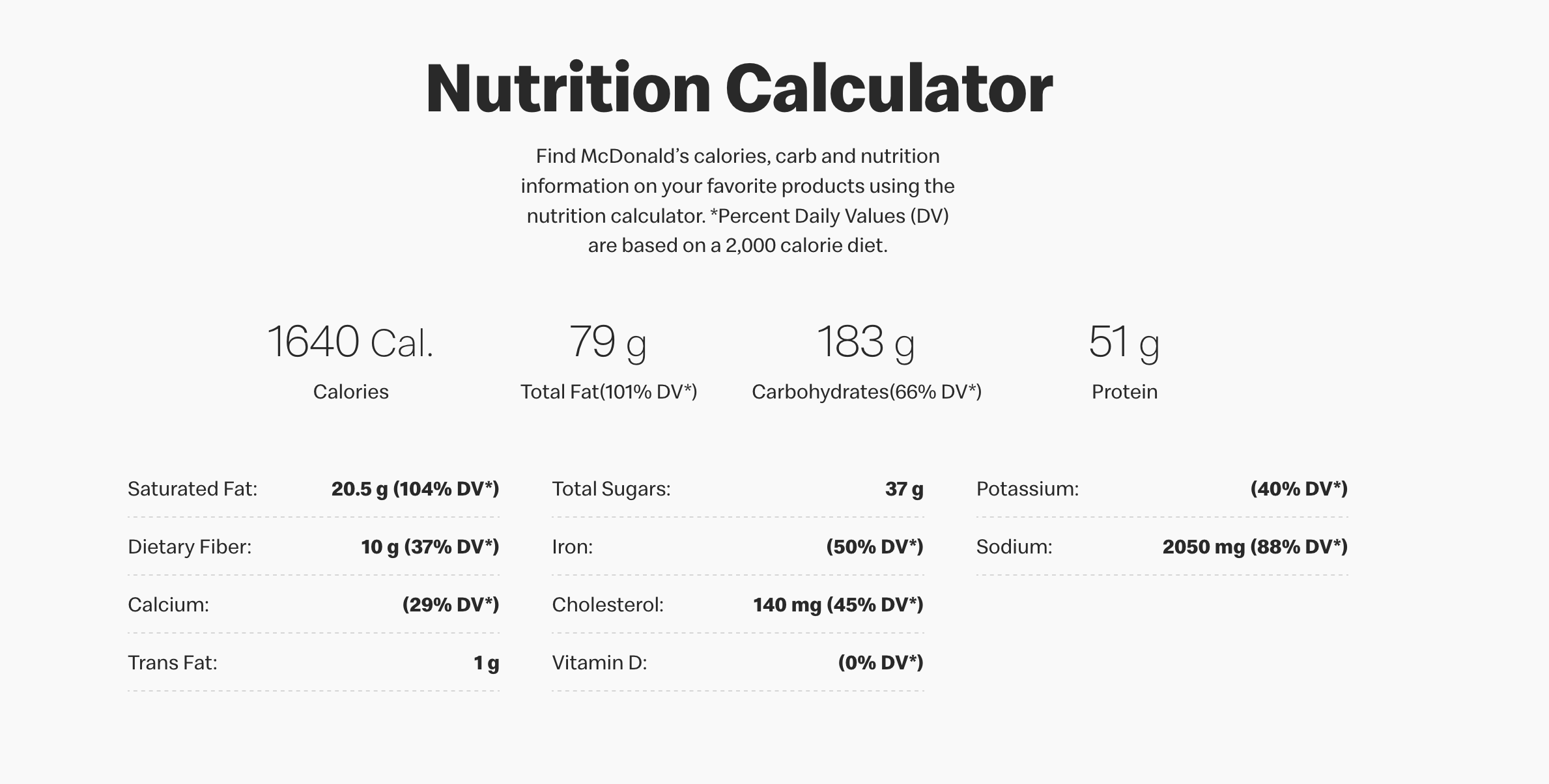 Above: The nutrition facts for a day I ate a McChicken + fries for lunch and a Big Mac + ice cream for dinner.

I did unsurprisingly feel pretty sluggish and nauseous during the experiment. This is most likely because of the amount of oil I was consuming through the fried food. I also felt constantly full even though I wasn’t actually consuming a lot of food, which I attribute to having a high-in-fat diet. The combination of not over-eating and staying within intake recommendations showed I could be decently healthy (based on nutritional recommendations) with the two-meals-a-day McDonald’s diet (again, not a nutritionist). That said, I would no doubt feel miserable. 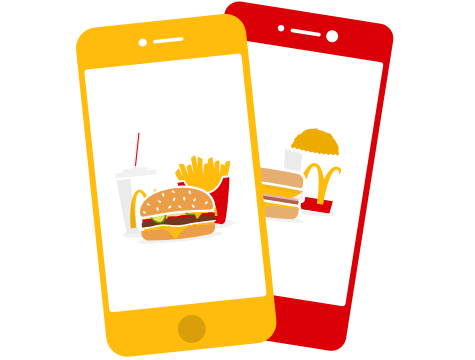 I ordered all my meals through the McDonald’s phone app, which always had deals and helped keep the cost down. I never exceeded a total of $10 for my two meals per day, with an average value being around $7. The best value I got was $2.04 for a McChicken and large fries.

These low prices are both a good and bad thing. Obviously, spending less money on food is a good thing. But as a friend (who did this challenge with me) pointed out, when you can get a burger and fries for less money than a head of broccoli, that’s a pretty good indicator of larger societal problems. I won’t get into it too much since I’m not an expert in economics and nutrition, but the ease of access to non-nutritious junk food over nutritious food is a big reason for the health issues happening in the US.

The amount of trash produced during the week hurt me just as much as the junk entering my body. Because of the pandemic, everything I ordered had to be taken out, which meant large amounts of packaging were used. 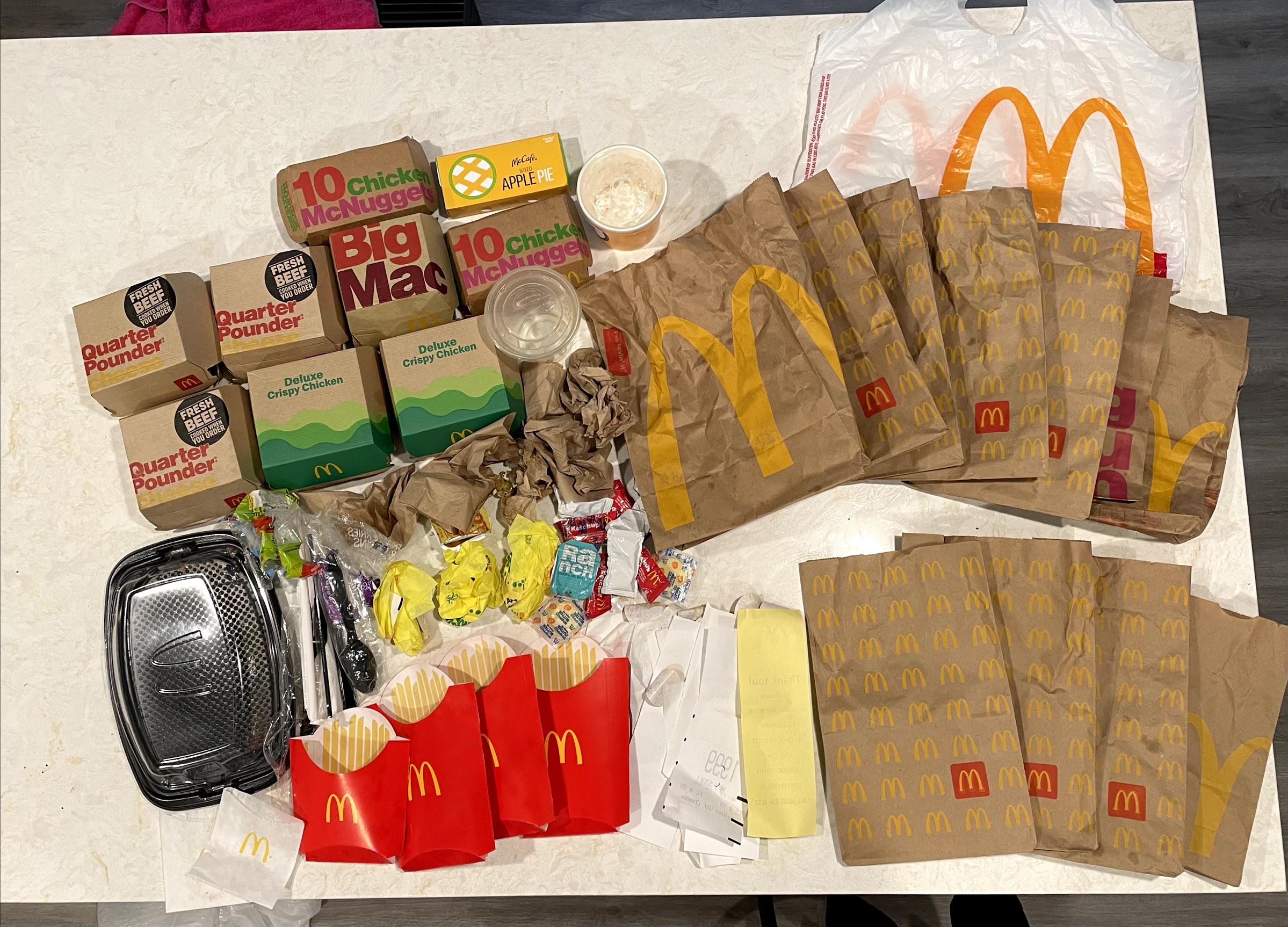 Of the 1.6lbs of trash produced, only the paper bags had a label on it saying that it could be recycled if dry and clean. On the plus side, a lot of the materials used for the packaging seemed to be made from recycled materials.

One annoying thing that happens all the time when getting take out is the amount of extra napkins restaurants give you. Sometimes they give you an entire tree’s worth of napkins, and most of the time it goes straight into the trash unused. Interestingly, during my week eating McDonald’s the amount of napkins I received was very inconsistent. Sometimes I got no napkins, other times I got a massive stack. At the end of the week, I ended up having 67 extra unused napkins..

Looking Back on My Week

You need to experience unhappiness to know happiness.

The highlight of the experiment was the happiness and excitement that I felt after it was over. Being able to choose what I was going to eat and not limit myself to experiment rules cheered me up. The fact that I could eat things that had color was amazing (pretty much everything at McDonald’s is a different shade of brown). That’s not to say that I regret doing the experiment—quite the opposite. It’s important to take things away from your life once in a while. It lets you see what you are taking for granted and appreciate it when you reintroduce it back into your life.

To finish, here are some extra random things that I learned from this experiment:

Thanks for reading and here are my other blog posts if interested!