A Pint for the Soul 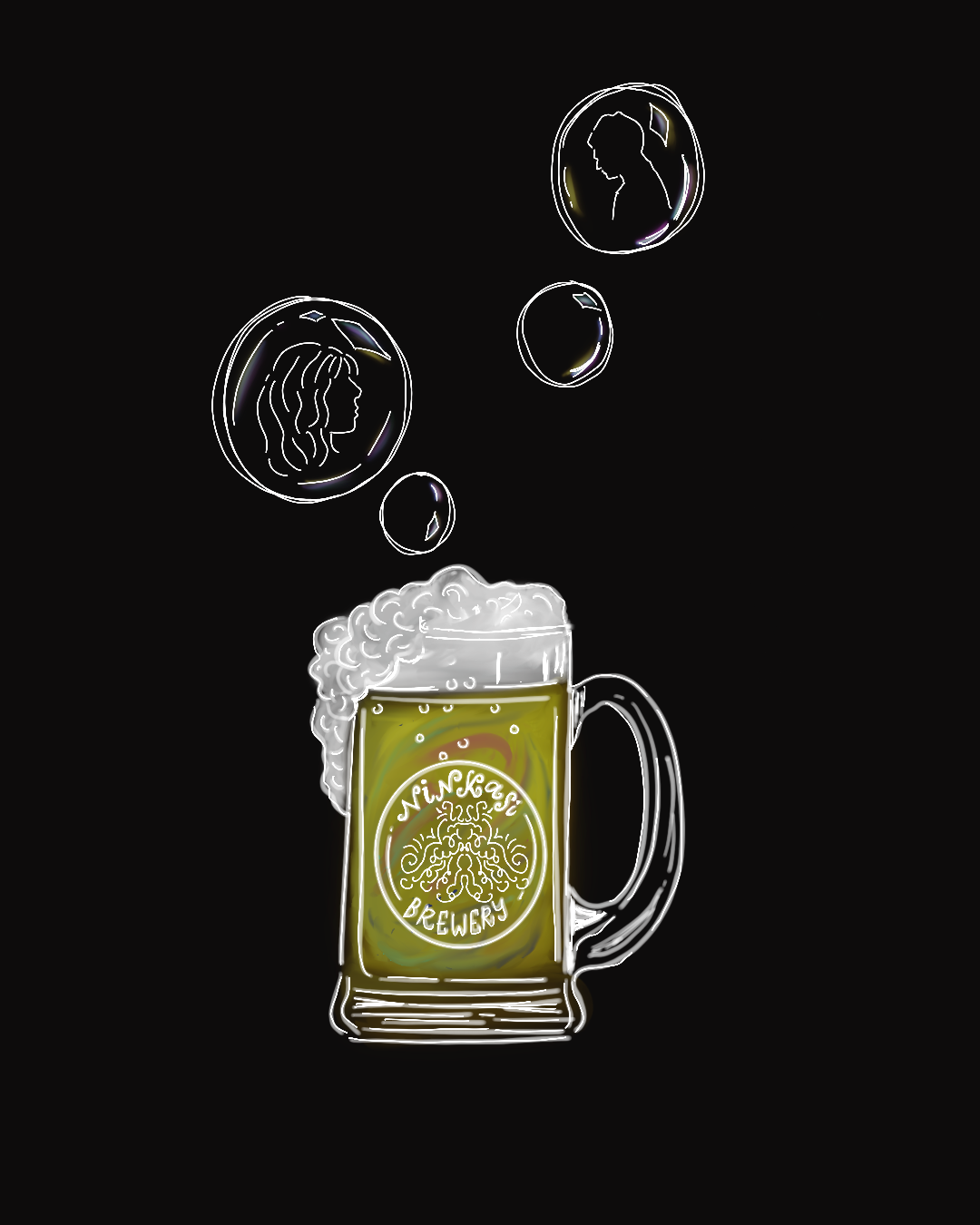 I open the red notecard to familiarize myself with its contents. My breath hitches as I read the detailed account of the incident. Stuffing it away in my pocket, I look up at the Grim Reaper standing in my office.

“Thank you for escorting her here. Grab a pint of the Sikaru ale on your way out.”

“My pleasure, Misha, I will. It happens to be the end of my shift!” He gives me a quick nod before exiting towards the tasting room.

“Mish, you ready?” Kristoff’s voice rings through the intercom.

“I’ll be right there,” I said, composing myself.

The brewing chamber is a large brightly lit room filled with endless rows of vats; the smell of fermenting beer heavily soaked in the air.

I immediately spot Kristoff, my protégé in his turquoise satin blouse and navy dress pants, near the back entrance. Next to him is a bewildered-looking woman in a green cardigan and light-yellow gingham dress.

“Hi…” her reply is barely audible, and she looks like she’s moments away from hurling up.

The emotional turmoil clearly visible on her face triggers a memory that I’d kept buried away about my first day at Ninkasi. Instinctively, I rest my hand on Elena’s shoulder to comfort her.

“Kristoff and I will show you around, and you can ask us all the questions you have? I’m sure you have many, but let’s go through them one at a time.”

She quietly trails behind Kristoff and me as we walk across the expanse of the brewing chamber. I start rattling off an introduction for the brewery, figuring it would serve as a distraction for Elena from the overwhelming sights and sounds she’s about to witness.

“We believe Ninkasi was the deity who established this brewery and trained the brewmasters a long time ago. Beer, being ubiquitous throughout humankind’s history, works best in accomplishing our mission. You’ll understand what we do and how it works in the brewer’s room.” I said, halting in front of a set of paisley patterned ebony doors. I'm about to open the doors when her voice pipes up.

“So… after people die, they end up in a brewery, making beer and serving it to customers?” Elena’s voice is barely a croak, every word trembling harder than her legs.

“Yes... and no. We serve the living. Think of it as providing a weary traveler with sustenance that they need to continue their journey of life,” Kristoff answers, giving her his hand and steadying her. “But not everyone who dies takes on this specific role.” His voice gets lower and remorseful.

Elena tears up, agony distorting the smooth skin on her face.

“I can’t recall how I died,” she said, anxiously working through her memories.

“It’ll come back to you, as the shock wears off. It hasn’t been long since you passed,” I state rather matter-of-factly, before rambling on about the post effects of death. “When the human vessel dies, the process of retrieving the soul…”

“Uh-hum” Kristoff clears his throat, trying to get my attention, stopping me from bombarding Elena with my ceaseless knowledge about soul retrieval.

“Anything to add?” I respond, peeved at the interruption.

“You might want to figure out why another Grim Reaper is visiting us unannounced?” A hint of mischievousness in his voice as he points to my left, where a short and chubby female Reaper walks up, tailed by a young boy who looks paler than snow.

“Misha darling,” the reaper chimes, waving ecstatically like we were old friends meeting after a long separation. She motions to the boy to stay where he’s standing as she trudges up towards the three of us.

“Meeting a second Reaper wasn’t on my schedule for today. To what do I owe this pleasure?” I said.

“Well, I had heard that your brilliant brewmasters have perfected the new stout for humans suffering from volatile emotional reactions,” she said. Her eyes point awkwardly at the young boy. “I’d like to get some.”

“It’s a mass murder-suicide situation. You know what he’s in store for.” She adds, casting a furtive glance at Elena.

“Of course.” I said. “I’m sure Kristoff can help with this specific request. The effects might not be as comprehensive as it is on the living.”

“That’s all right. It’ll help a little, considering he’s new and still shaking off his human tendencies.” She nods a thank you and stalks off towards the boy with Kristoff in tow.

“Why don’t we move on with the tour?” I turn to Elena, aware she must be just as overwhelmed as the young boy, though they would serve unique roles going forward.

“If everyone who’s passed doesn’t end up in the brewery after they die, where is that boy headed?” Elena asked. She cranes her neck to stare at the boy standing in the distance.

“Like in hell?” she had a quizzical expression on her face.

“Hell is a construct created by human beings. They become Grim Reapers. Like the one that escorted you here, they receive the opportunity to usher souls. And over time, most build an appreciation for humans and repentance for abusing their chance at life. Usually, Grim Reapers get another chance at life after a stipulated period. Suicide isn’t evaluated the same way, but I imagine in the young boy’s case, his murders held a greater weight-age on his destination.”

“So, what happens to those that die of old age, disease, accidents?” she continues asking.

“Natural death, because of old age, allows souls to attain nirvana. Death caused by disease, an unfortunate accident, or even just suicide allows those souls immediate reincarnation, likely since they didn’t get to complete their cyclical journey.”

My response invokes a palpable sense of dread on Elena’s face.

“I didn’t attain nirvana, reincarnate, or turn into a grim reaper. Then what other sort of death is there that brings me to this place?” Despair now visible in Elena’s eyes as she balks at her unknown predicament.

I felt the sharp pang of empathy surface. It had been a long time, but I hadn’t forgotten the emotions I’d experienced when I understood what had brought me to Ninkasi.

“A death where a hard choice was made,” I murmured.

Before Elena responds, a soft melody reverberates from the walls and draws her attention away. “That melody, what is it?” Elena sways lightly to the enchanting music, almost in a trance.

“Ahh... the ‘Hymn of Ninkasi’. It’s soothes the essences, allowing us to use them.” I push the paisley-patterned doors open, ushering Elena towards the song.

We enter a dimly lit room and in the far corner, a couple of brewmasters busily coax colored wispy threads out of membranous vials and into cauldrons while singing a sweet melody.

“Those are the true essence forms of human feelings, like hope or courage amongst others. Brewmasters craft recipes with a mixture of essences and imbue the beer with the essence cocktail most suitable for the customer’s need. You’ll receive extensive training before you reach the brewer’s room. For now, you’ll be tending to the brewing chamber and tasting room.” I said. “Let’s start your day in the tasting room where Ninkasi souls interact with their human customers.”

I knew Elena would have more questions as she awoke from the musical trance, but her gait seemed steadier and allayed.

After walking through winding hallways, we come upon a large gallery interconnected to multiple identical galleries by spiral staircases. A never-ending abyss of bars stacked on top of each other. Long tables with barstools furnished the spaces, and a myriad of individuals adorned the tables, served by brewmasters.

Elena and I went down about four floors, arriving at the table Kristoff was serving. He was finishing up with the Grim reaper and the pale-faced boy. Bidding their goodbyes, the boy, now more composed, walked past Elena. As Elena met his gaze, her eyes lit up in horror, while the boys’ face showed what I knew to be guilt.

“I did make a choice to die...” Elena said under her breath, staring at the boy hurrying away. Their brief interaction had hastened her last memories.

“Ninkasi souls are the only souls that can watch over their loved ones even after death. A reward given to the soul for their selfless act as a human.” I said, placing a hand on her shoulder.

“This is the best thing I’ve heard since this entire experience started. I get to see everyone I love again.” a slow smile cracks across her face, showcasing earnest joy.

Her moment of joy doesn’t last long, and gets discomfited by Kristoff.

“Well, not all of us think of it as a reward,” he said, vigorously wiping down the worn-out bar counter.

“It is a blessing to watch over and guide those you’ve loved. But with time, I watched my loved ones move on, as their memory of me flickered away, replaced by new beginnings. I watched them pass away one by one, either reaching nirvana or reincarnation, while my existence continued with no end in sight. We bring solace to weary human souls, but we cannot interfere in their lives. We’re mere guides watching from a distance.” His eyes look pained.

“Kristoff, one should not impose opinions on another.” I give him a withering look of dismay.

Clearly frustrated, he stalks off, muttering something about being needed at the brewer’s room.

“He seems quite upset.” Elena’s face is solemn again as she watches Kristoff leave.

“After 300 years, I’ve learned to love each human story and see many fulfilled lives. Time is what makes emotions potent, and the more we have of the former, the less potent the latter becomes. Inevitably, we shed the very emotions used to tend to our customers. Kristoff knows that as well, but sometimes feeling yourself slowly becoming numb is the scariest emotion of all. Anyway, I digress, Elena. It’s time to meet your first customer.”

A man walks to the bar counter. The sight of him takes the breath away from Elena as she stares at her husband, Gary.

“Don’t worry, he won’t recognize you. This is only a dream to him,” I whispered.

A sense of determination appears in her eyes, an acceptance of this weird predicament her afterlife has presented to her.

“How can I help you?” she asked Gary.

“My wife died today. She was going to be 32 tomorrow. I was coming home after buying her a gift when I got the news,” he said in sobs, showing Elena the red purse, she’d wanted.

“She saved all those children during the shooting, but what about me? How could she think it would be okay leaving me behind? My life seems meaningless without her. Will the pain ever subside?” he implores.

I watch as tears well up in Elena’s eyes. Wondering if this might be too overwhelming for her, I consider assisting.

“Yes… with time, the pain will pass. But remember that she’ll always be looking out for you,” Elena said, grabbing an empty pint glass.

And with that, I knew she was going to be okay.