The summer comes and traffic builds up along the coast. People come in their cars to a place less densely populated, where they can breathe again, and see the water. There is a certain amount of human pysche that isn’t as resilient as we all would like it to be. ~~

They’ll tell you some history or about their family or how things here are all stacked atop another thing. They say about why there are rock walls in the woods all over New England because it was land that couldn’t be controlled, so they let the trees grow back, and the walls fall over.

They call it the mainland, or America—from here you can see it— From Mullen’s Head you can see Isle Au Haut, and duck camp. You can see out past shoals and Islesboro to Mt Desert Island. ~~

And lower on the shore I see red eye of a loon, Back of a black white checkermark pattern, divedown Swim around In this body of water that flows between lands. 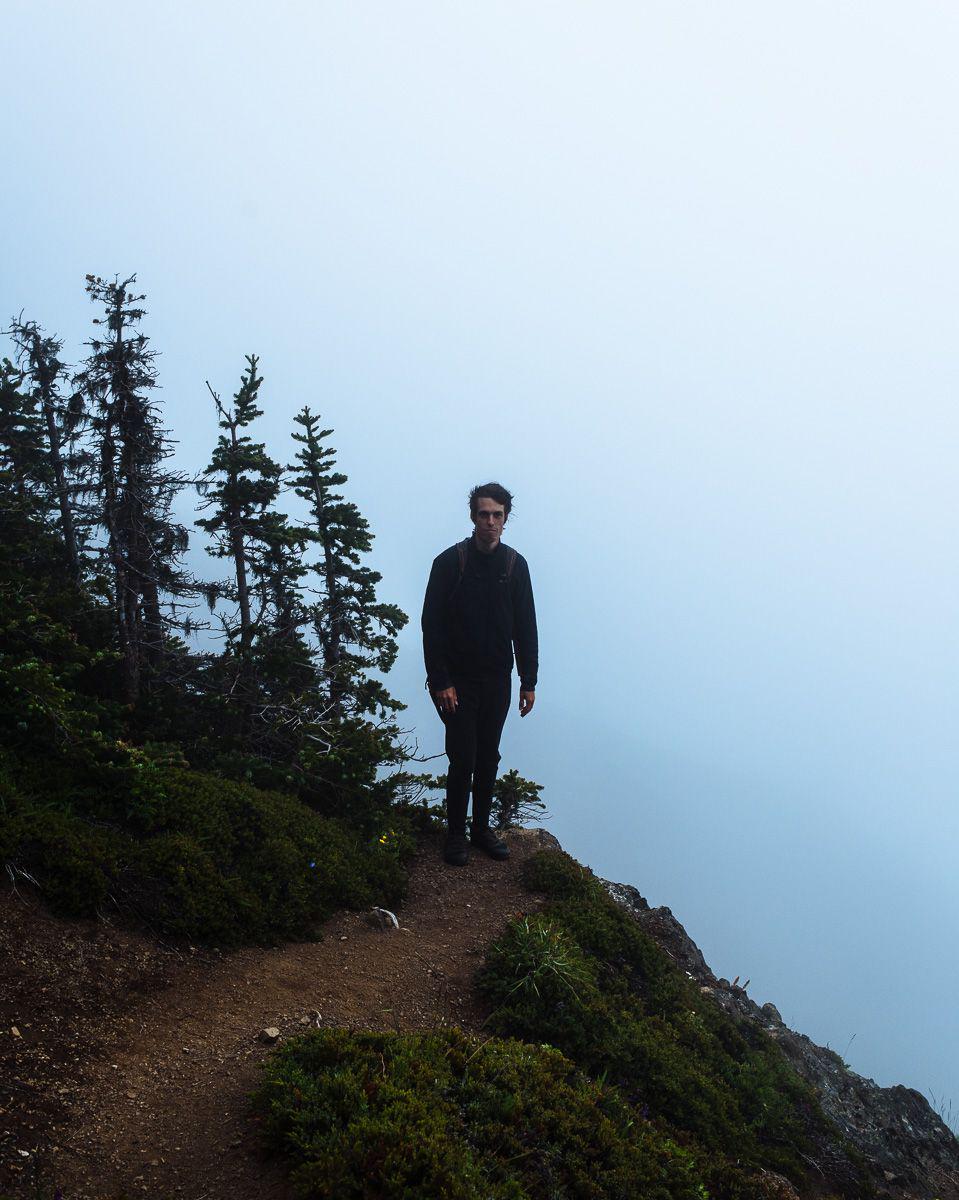 Today I woke up and looked out the window at the sky. I had that little feeling I sometimes get, that told me I had access to that certain place inside of me that I can draw from from time to time. I guess it is a place that is filled up with little moments, thoughts, experiences. Eventually those coalesce into something that wants to take root in the world. The writing I make on paper, for example, comes from the movement of my hands. And the movement is translated into sense by language. And others read this language and think something of it.

The first log I load bursts into flame heated up by the embers of the log before, glowing on the floor of the wood fired boiler. I load another, then ten more until the stack reaches a little over midway heaped to the top of the chamber. And as I load I think about logs lighting other logs passing the flame up through the pile, to ones on top layers burning layers ‘til they all burn away. ~~

Scent of snow-cold covers everything up.

I am just staying me even when nothing else helps to be that way. ~~

From the hill above I can see an iced over bog and dry golden grass frozen in clear water. The cold wind An empty field Geese going over Woodpeckers in the woods no one is here 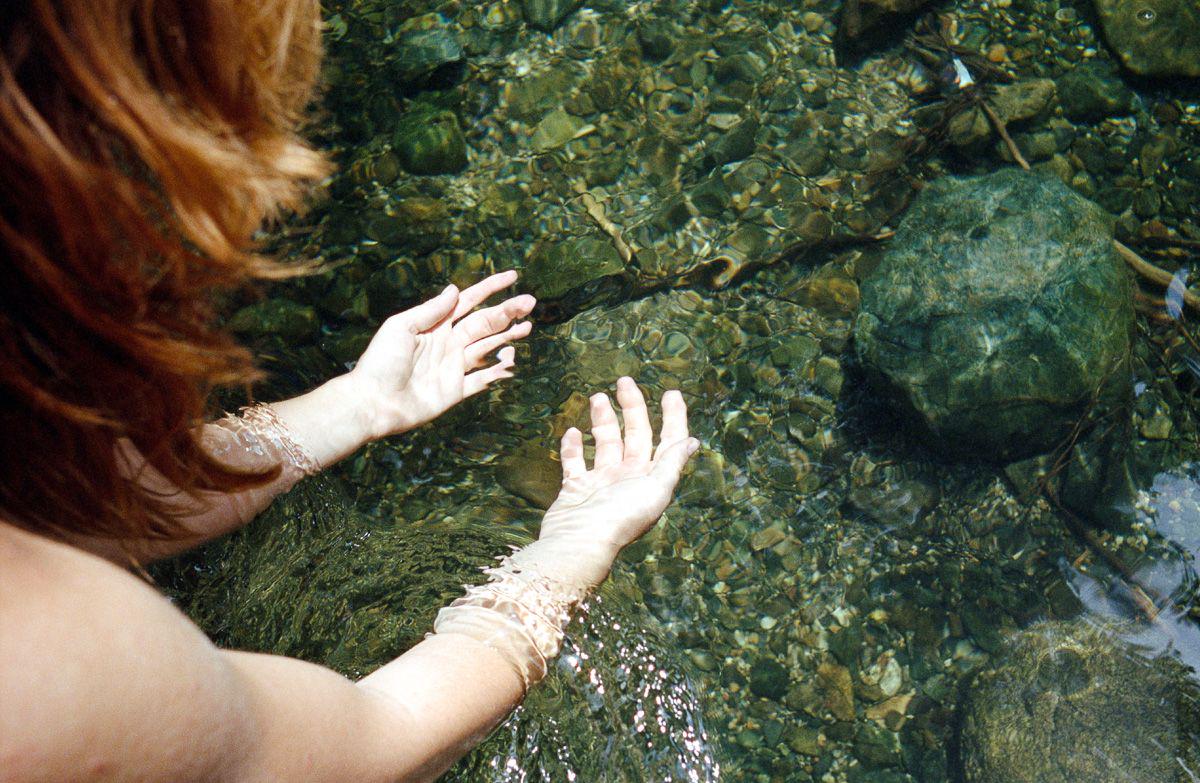 Smoke moves out from stovepipe. White birch branches burning in there. ~~ Sitting in here heat moves up through pipes to keep my body warm

Heat is life coming back from something— a log burning the light it stored. ~~

The first glimpse of spring, the rain the snow that melts the ice has gone. ~~ 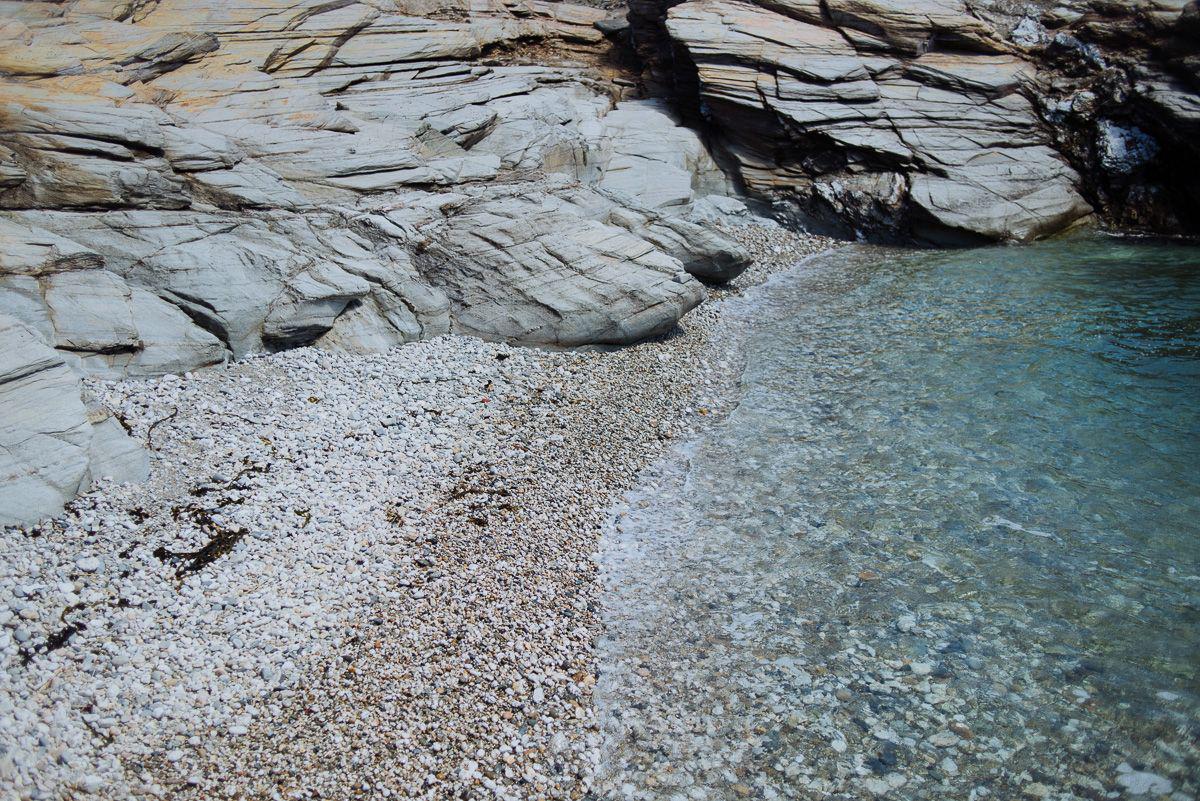 The shore of this island is often covered in small stones. They are many-colored and shaped. They wandered here, like me, from somewhere else. They were polished clean in their wandering—rounded, and softened. Some make dips in the sand around themselves when the water pulls away. And others sink deeper in. 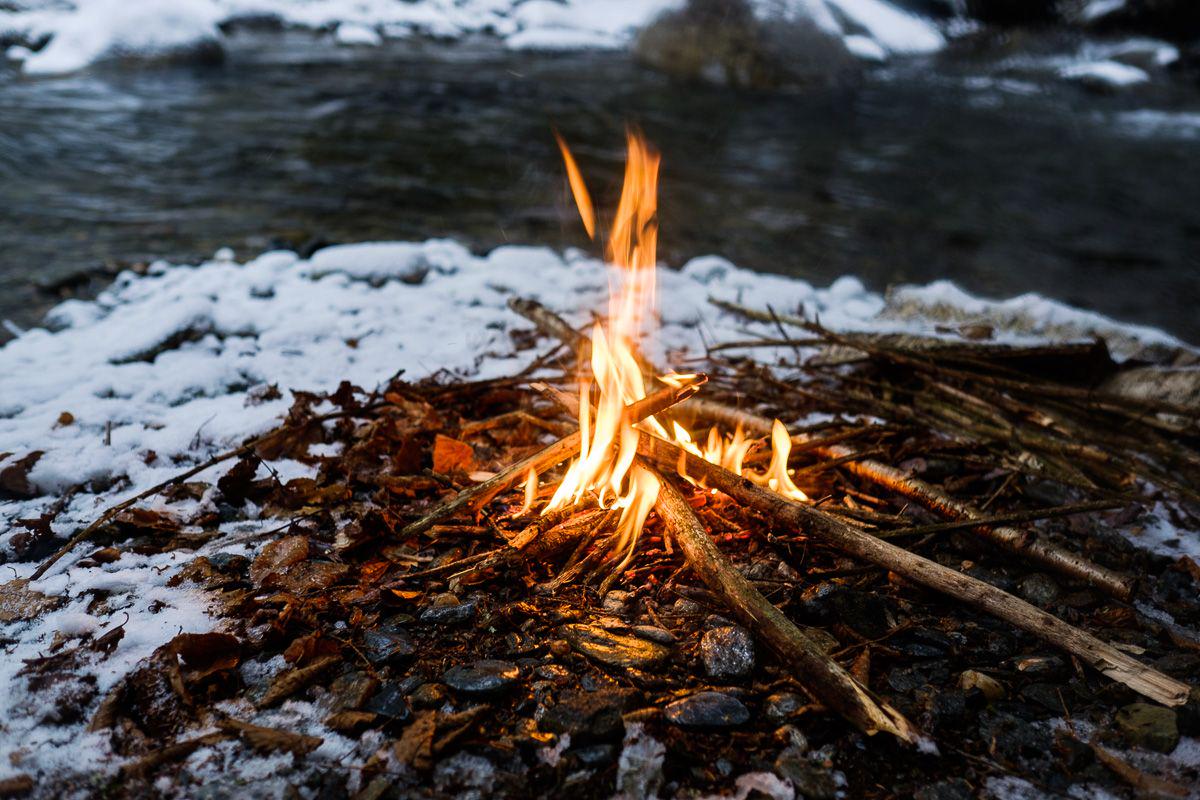 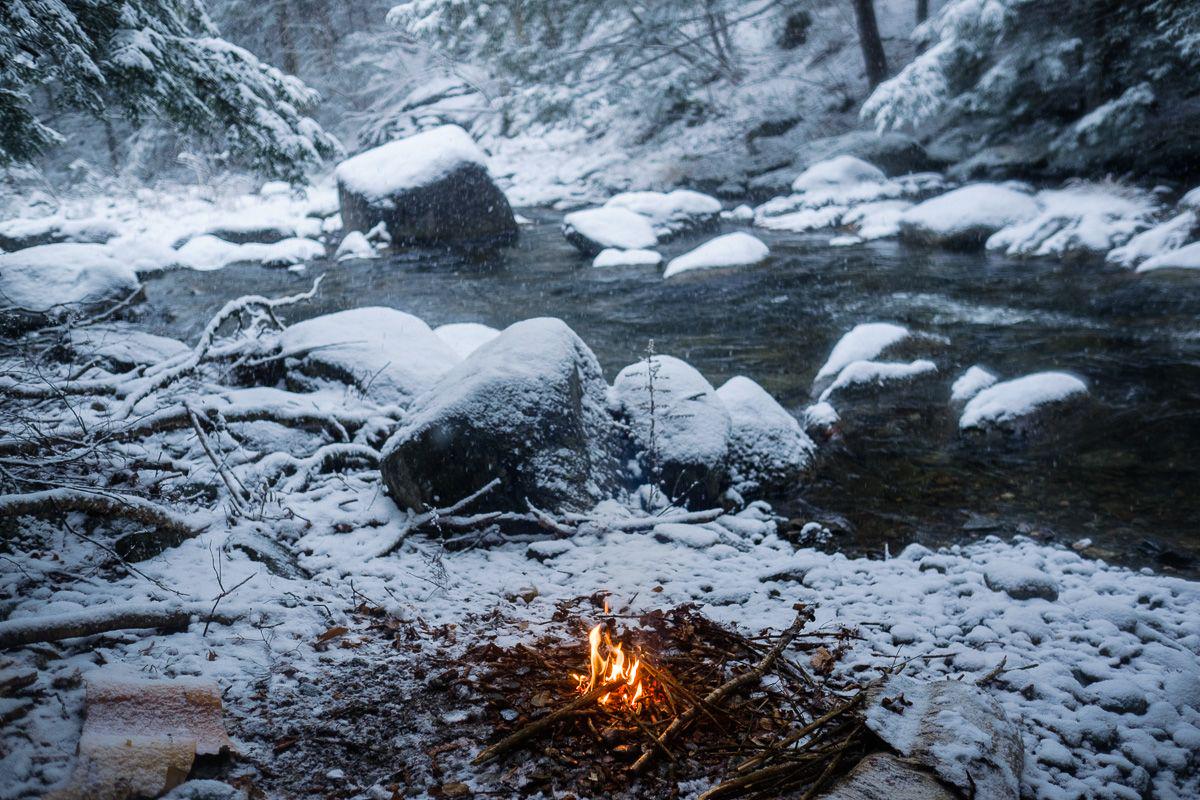 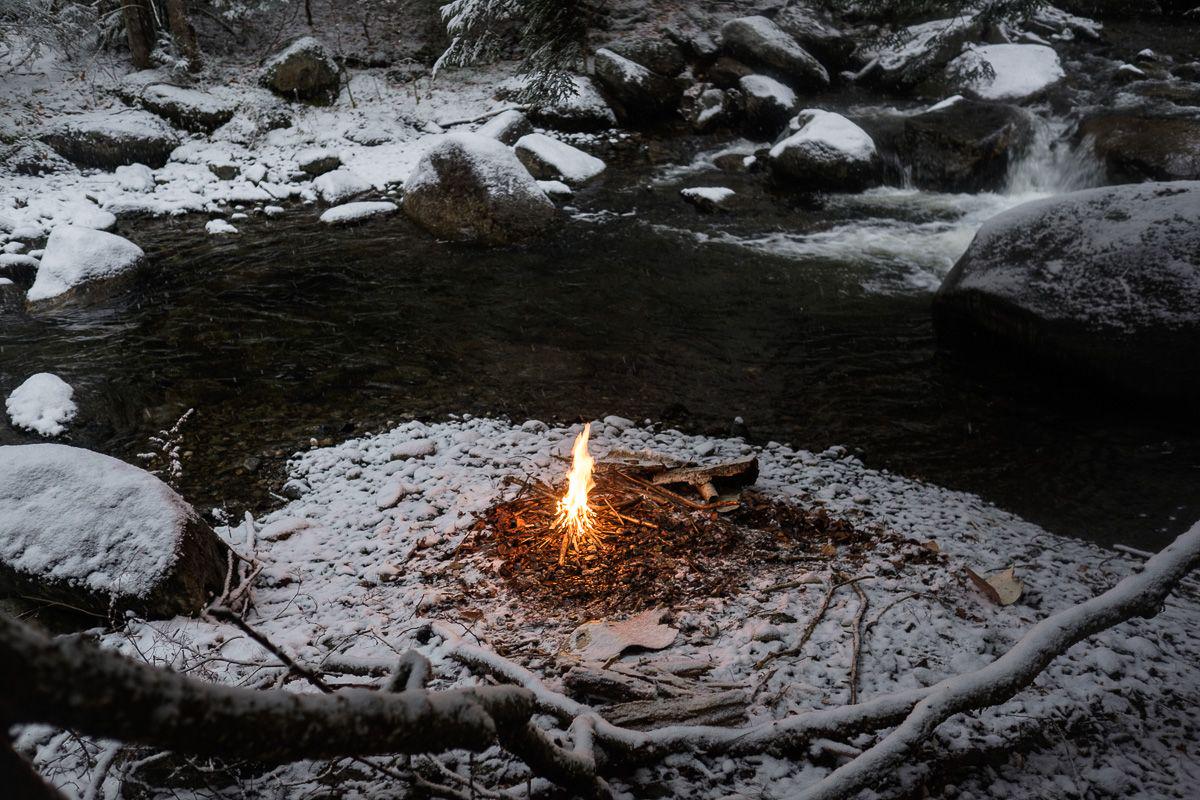 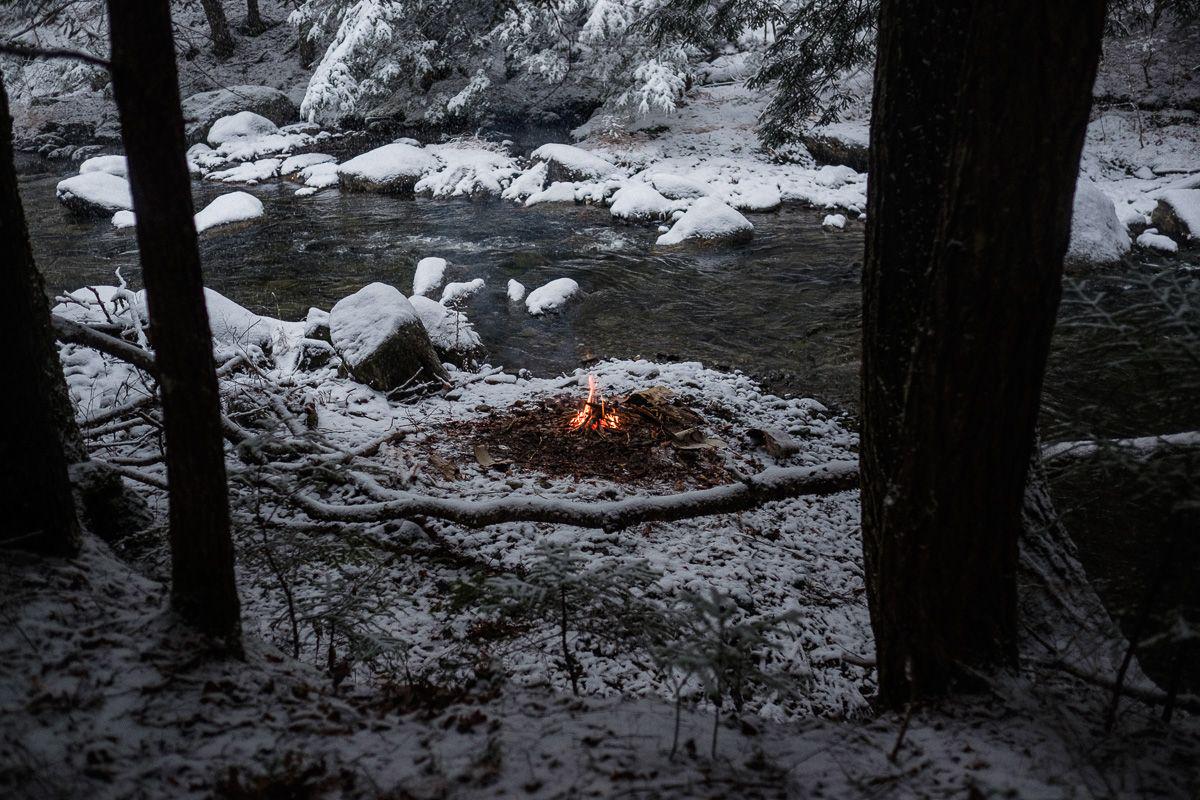 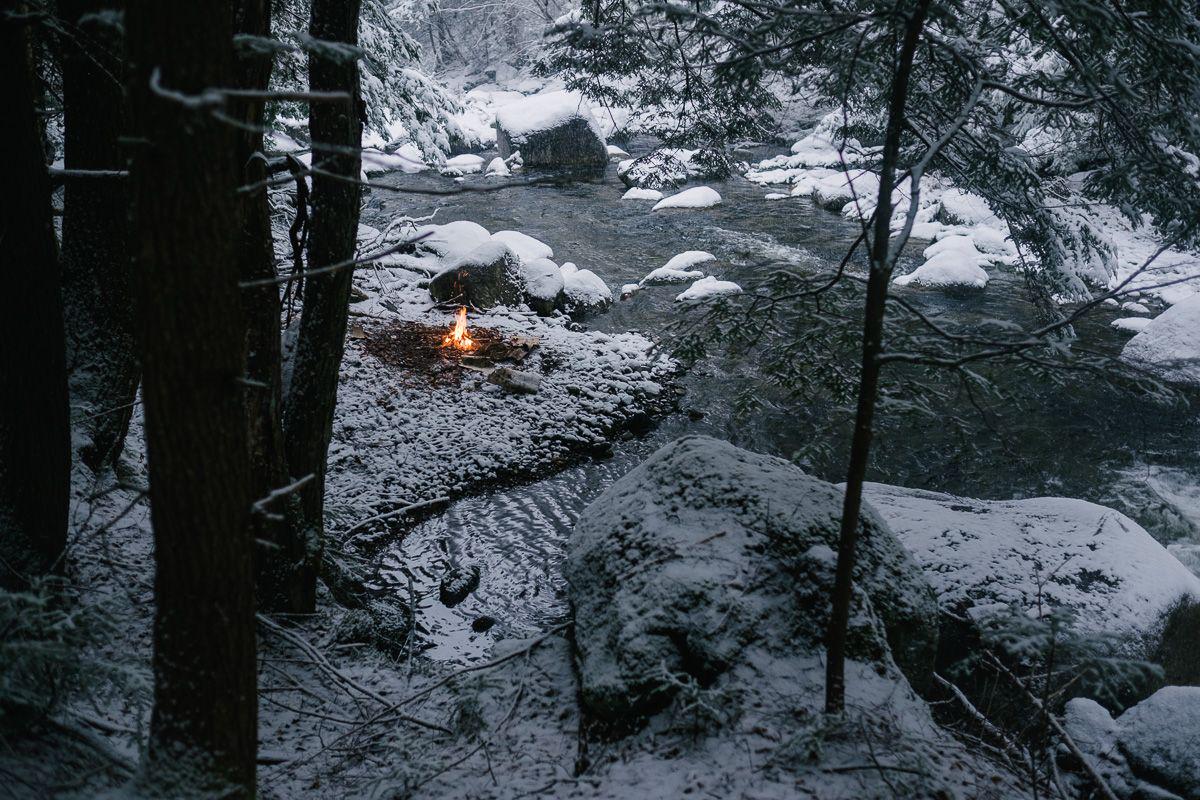 I think as I walk along the beach that the sea forms to the land and that the land shapes the sea. I think as I go along the breaks— is it the sea forming the land and the land being shaped by the sea? I think to myself as I walk along the rocks and sand between broken boulders, and stones old bones! like my own hard foot-bones— leaving prints in the soft sand— that a body shapes to the land, while a land shapes the body. ~~ My notebook and pen Rest on an old desk by a window On a far island, away from what I knew

Working here: a line from long ago. Dropping it into the sea, watching it sink into black depths. Paying out the thread hand by hand hope it won’t run out.

Thinking forward and back, thinking about now, also: not thinking. Doing nothing, waiting for spring. Stoking the boiler, weeding and writing, eating. Maintaining that thread.

Maybe it was on the day the greenhouses opened when the sun made it too hot inside that we had gone down to the blueberry barren to prune. I guess it was the first day that felt like something had changed. That morning I’d watched the light hit a new part of the wall.

Down under the blueberries, pruning them with dull shears. Laying on my back looking at deep blue sky between the branches.

Three petals fell off the begonia as I swept through the room. I listen to a podcast about Bear’s Ears an insect droning behind Jonah Yellowman’s voice but still snow here. Yellowman says:

“The colors of the sunsets are changing.”

I don’t know what to write anymore.