Just my research and general thoughts on the project. There is quite literally so much to this that I anticipate not being able to cover everything.

This will be enough to get you to DYOR on #Verasity. First above all else...Data.

So, let's discuss what #VRA is initially intended to do, the bread and butter before we get into features that make the project go from professional to every #gamers wet dream.

$VRA is unique because it brings blockchain technology to the esports, video entertainment & advertising sectors. It's patented technology is called POV (#ProofOfView) which completely changes the game, pun intended.

#ProofofView basically solves a $160 Billion dollar industry-wide problem in the advertisements sector alone. Currently as it stands 40% of ad spend from corporations to small content creators is stolen year-round by bots and AI designed to fake view counts.

View counts are usually what is used to determine what a company or content creator will pay in ad spend, usually to google or Facebook. This is a huge problem because the ads are not only being pumped artificially and costing money, but then the host usually has to pay back the consumer if their videos have been found to be pumped, only raising the cost of doing business all around.

#Verasity is taking this #PoV a step further into the gaming arena, which we all know is huge in the streaming/marketing/and engagement business. #Esports is a rapidly growing industry, I myself love playing and competing in #RocketLeague (see my banner photo lol)

So what is awesome about $VRA #PoV? The patented tech will track view counts and record them on the blockchain through unique identifiers given to account holders. Meaning if #verasity is built into the API of your site, your account is countings views.

This is a good thing, it keeps your favorite content actually prominent and costs the content provider less to market or engage with the community from a business spend standpoint, meaning they have more capital to spend on other things.

Onto what I am really excited about, Esports gaming tournaments and how $VRA will host/participate/make money with ads and sponsorships. #Verasity owns their own Esports fight club that is autonomous to the #verasity team.

Users can create their own competitions, play for VRA jackpots and participate from Verawallet with paypal or credit cards.

The cool thing is while they pay in fiat, they are using $VRA currency We as gamers can organize our own competitions with brackets and ladders with an overarching jackpot payout of $VRA that will go directly to the winners #Verawallet. This gives control back to the gamers. Eventually, the gamers will even be able to buy merch using $VRA on site.

$VRA demand is driven by a few factors: Users are required to buy credits with VRA via Pay to Play or subscription membership packages.

Gamestore credits are done with $VRA.

Staking rewards #Verasity makes money by taking a cut of the fees from gaming tournaments to withdrawals to an ad playing. They then use their net revenue to buy back $VRA from the exchanges to burn tokens, driving the price of $VRA further up. 2,135,033,305 #VRA burned since its launch

I love the fact that users will be using #VRA without knowing it. Fundamentally that is a huge progressive move for the #crypto space and is also why I support #telcoin because the same principle will apply mostly. #Verasity will also have #NFT capability which will link to the #POV aspect, preventing fraud and allowing for more security.

$VRA is already integrated with the following video players. 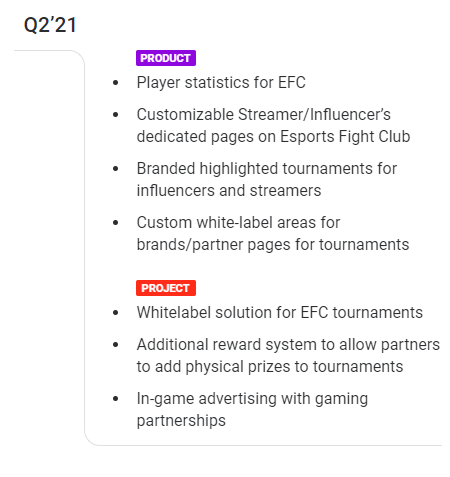 TL;DR We may not have to pay Capital Gains Tax on $TEL.

Thread below, take everything with a grain of salt, either way, it should be informational to those looking into Telcoin. So my discussion on $tel last night started with talks on TA and how technical analysis is the act of taking past historical data, identifying volume and percent gains among so many other things and identifying future possible trajectories.

#LB649 Passed into law yesterday authorizing #telcoin to become the first digital asset bank in the state of Nebraska. This is unprecedented for any #cryptocurrency so far, to be spoken on in a positive light by US Senators who are proud to represent their constituents.

My personal opinion is that all past TA for $TEL is null and void now. Historical data cannot be measured against progress and newly found data. We can try to chart the future but it's all speculative anyhow. We are in new territory, and TEL is bigger than trend data.

Not only is LB649 the wildcard due to the things the #telcoin team will be able to do legally now that other #crypto could not do, there is also the V3 wallet. Picture saved from a long time ago, claim it if yours, idc. V3 will steal a huge percentage of the market from exchanges

V3 is a one stop shop for getting money in and out of crypto (ON/OFF Ramps). It is also a wallet, meaning no manipulation. Everyone remember the recent $BTC Dip? Common denominator when that happened was all the exchanges being down.

People couldn't sell their positions or even buy the dip. someone bought $tel for a penny on that dip but we couldn't because we couldn't use an exchange unless we swapped with readily available funds, likely at a loss.

Currently, my method of moving money Was/Is $XRP/ $XLM. I would buy on #coinbase into one of those, send it off elsewhere to get into what I wanted. It's a pain in the ass but works, reverse the process to get money out. New people have to do the same and they are often confused.

V3 wallet will allow you to swap into $ETH chains and #BinanceSmartChain at a whim. Picture for reference of them testing the wallet that flew around recently, pretty damn cool. Right now when I help people into crypto I have to explain so much from wallets, seeds, sending, etc.

New blood coming into crypto will have the ability to get money in/out, stake, swap. They are also partnered with plaid, and therefore #AMEX and #VENMO. This is speculative but we may even be able to pay bills with this wallet, still looking into this aspect. 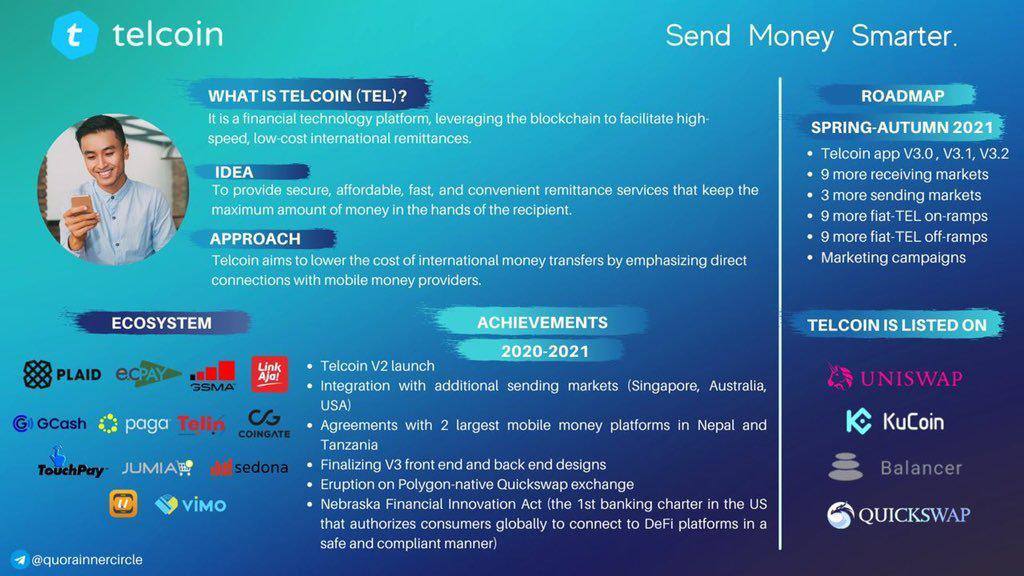 So back to my capital gains theory. I've asked a lot of crypto companies why they don't allow us to purchase straight from them in their wallets. The answer was the securities issue, which is why in TW it's a 3rd party, or its an exchange where you buy.

Why is #Telcoin able to sell us $tel on their wallet without these same risks? LB649 the first bank! 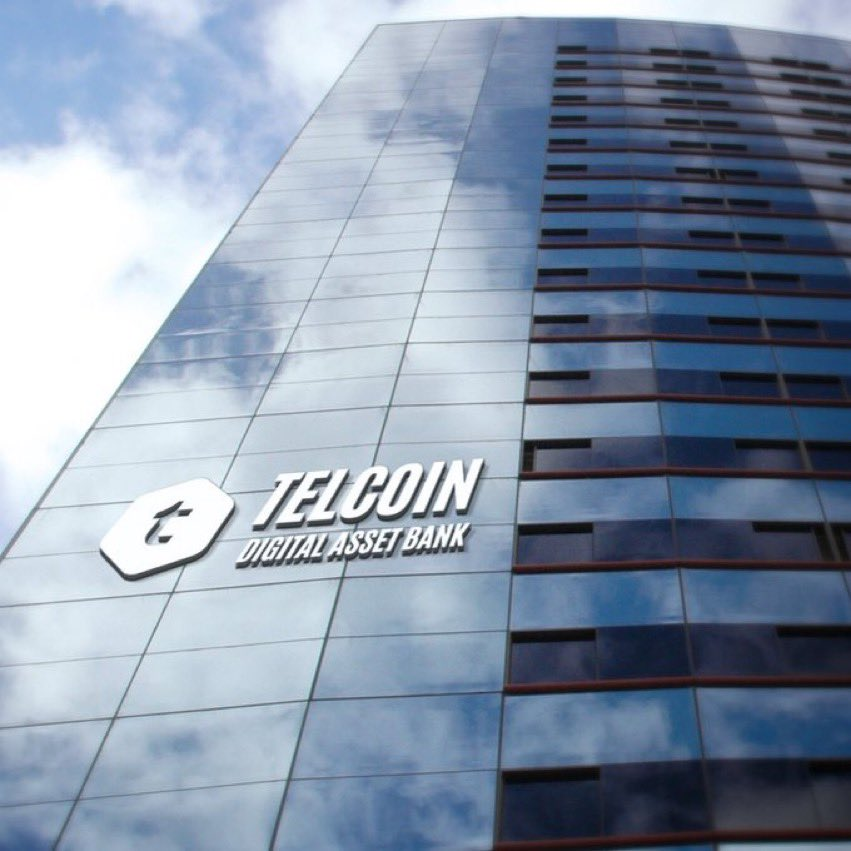 My thoughts are that if $Tel is going to be used all over the world, and allowed for government use, it will need to be a stablecoin pegged to a certain rate similar to USDC or USDT with minor variances allowed. Due to LB649, #telcoin becomes a recognized bank and if they issue a stablecoin, it's fair to assume that we can call $TEL a currency. That means capital gains tax does not apply.

Telcoin is going to allow the people to be able to bank themselves. The market all over the world needs it, and we just made a huge move here in the states to kick the ball off. The government can even use $TEL to send money now, think about the fees we will save tax payers.

These are my thoughts, there's too much spinning around to grasp the full picture. I still don't know what “Project Rivendell” is but I am a LoTR fan and I know it revers to the fellowship and unity. Fill me in if you know what's up there but it's close to their chest atm.

Super bullish on #telcoin, I am looking forward to seeing everyone gain financial freedom from this one. I have walked everyone I could into #telcoin. I still believe TA will be vital as normal circumstances happen but the short of that statement is I believe whatever past predictions exist, are going to get blown out the water in a good way and we cant predict it with accuracy yet. 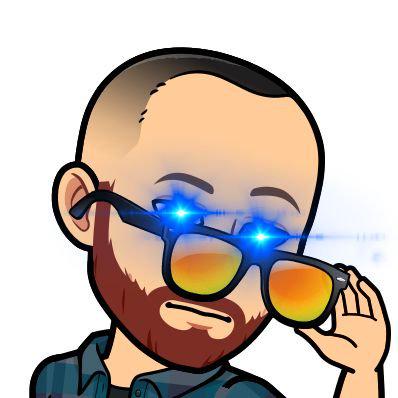