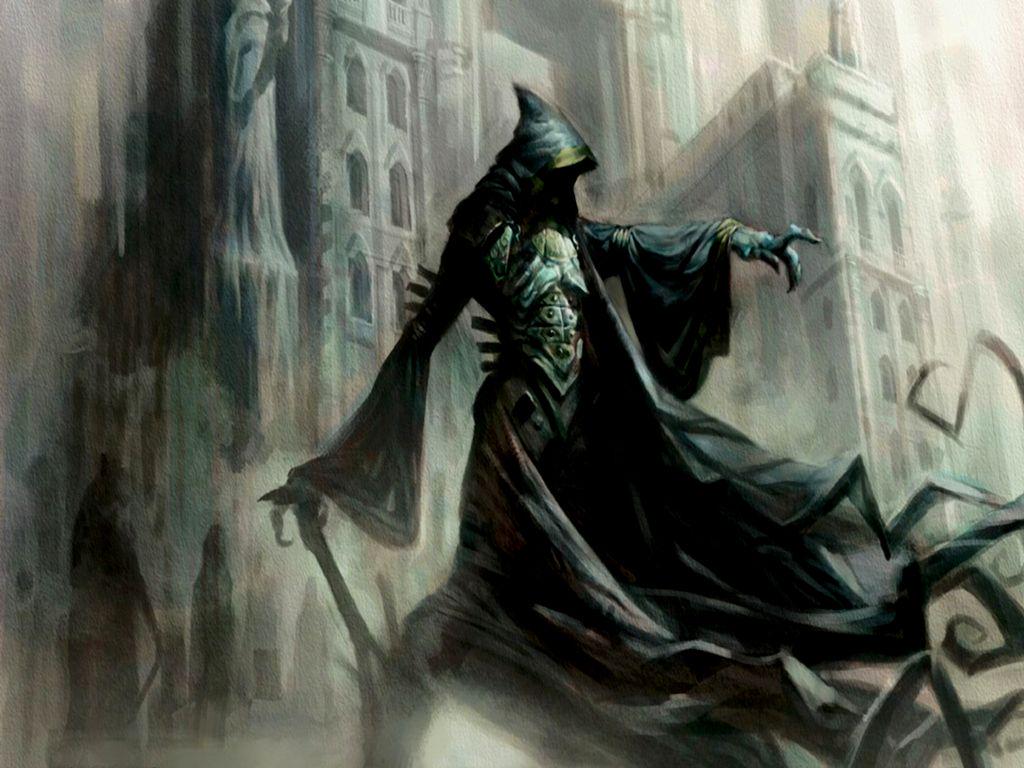 In our Rolemaster campaign, we played through Moria, down into the depths of the Misty Mountains. We were a somewhat largish party- a ranger, two magicians, a sorceror, two warrior monks, a rogue, and my barbarian archer. Down into Khazad-dûm we travelled, a raggedy company if there ever was one. It was a rather monotonous trek through the dark and lonely tunnels- we heard hints of noise at times, but never encountered anything other than long dead corpses, and dust covered remnants of the dwarves that once lived there. At times, we caught signs that someone might have been here more recently- ashes burnt out but not old, scraps that were putrid but too fresh, darkened stains that were the signs of blood from battles more recent than the halls were supposed to have seen. Further down into the tunnels we went, arriving at what seemed to be former living spaces. The ranger held up a hand to be silent as he crouched, looking at some sign that only he picked up. He motioned for us to go ahead, silently, as he listened, moving slower, bidding us to close the shutters on the lamps, reducing the light we bled into the darkness. This made the space creepier, but as we moved forward, we finally heard what made him give the order- the sounds of beings speaking. “Orcs,” he said simply as he unlimbered his bow. We all readied our own weapons as we followed his lead- and were set upon from behind. Other orcs had been tracking our presence, and we'd not sensed them. One of the mages took an arrow to the arm even as other arrows whizzed by like angry insects. Light flared, burning our eyes- but less so than our attackers, illuminating the orcs that crouched in a side corridor. We would have made to close the distance, if that same light hadn't also revealed the orcs in front of us, hands over their eyes- the light had interrupted their charge. After a bloody battle, we stopped to lick our wounds. In addition to the arrow taken by the mage, the rogue had taken a hard hit in the side, breaking ribs, and I'd taken a nasty hit to the head that had left my brain a bit addled. We should have kept moving. But the day had been long, and the battle fierce, so we just made our way to the closest room that we could find away from the bodies.

So tired we were, that we didn't even notice the shadow slipping away from the wall. The wraith hit the mage that was not hurt, chilling him, and the crit unfortunately silenced him. Despite that, my character noticed something strange moving beside the mage, and that something was off, moving to see what it was. The wraith attacked the mage again, killing him before he had a chance to come out of stun, but I was able to see the beast. I drew and shot, but hit only the wall. Moving to where the wraith was, there was no sign that anything was there- other than the dead mage. Someone else screamed out, hit by the undead shade, but after that hit, it retreated into darkness. We tried to fight it, but the GM used the shadows cast by our bare light and the darkness all around to great advantage. It was one of the first times that I'd seen someone use light and shadow so effectively to make us powerless, and instill fear- beyond that what the table was expecting. We did survive, but took horrendous damage, that would set the tone of the entire delve into the mines. In the end, we lost 3 out of the eight members of the party, and didn't even make it through Moria to the other side of the mountains that we were trying to reach.

It was a very good example of playing to an adversary's advantages to make them scarier than just numbers on a piece of paper, and was an encounter that we've never forgotten.