This blog post was written by Coil's founder and CEO, Stefan Thomas.

In May 2019, we launched Coil – the world's first open subscription for accessing and supporting content on the Web.

In the two years since then, more than 1600 websites have adopted the standard including many sites that I personally visit, such as Hashnode, Hacker Noon, Dev.to, Wowhead, A List Apart, CSS Tricks, freeCodeCamp, and many more. We made it easy to deploy Web Monetization via a Wordpress plugin. Together with Desigan Chinniah, we created Grant for the Web, a $100M grant which has already paid out $8.2M to 115 projects from 27 different countries. We also announced the formation of the Interledger Foundation, a non-profit organization which owns the trademark and other intellectual property around Interledger and advocates for equitable financial access.

Through this work, we met many amazing creators and developers from all kinds of backgrounds who taught us how the current system of large content platforms doesn't always serve their interests.

But we also learned about the limitations of our current approach. In order for streaming payments to generate a meaningful amount of revenue for creators, we would need to have a huge number of users. A lot of our partners have asked us: “We love the fact that Interledger is open, but is it possible to support other kinds of payments in addition to streaming micropayments?”

Interledger is a general protocol for moving money. Supporting features such as all types of payments, including subscriptions, is only a matter of implementing suitable protocols on top of Interledger. However, today's Interledger wallets only support receiving streaming payments. We found that the primary reason for this is that implementing all of Interledger's features would require a large amount of engineering resources, which simply doesn't make economic sense for small wallet providers. 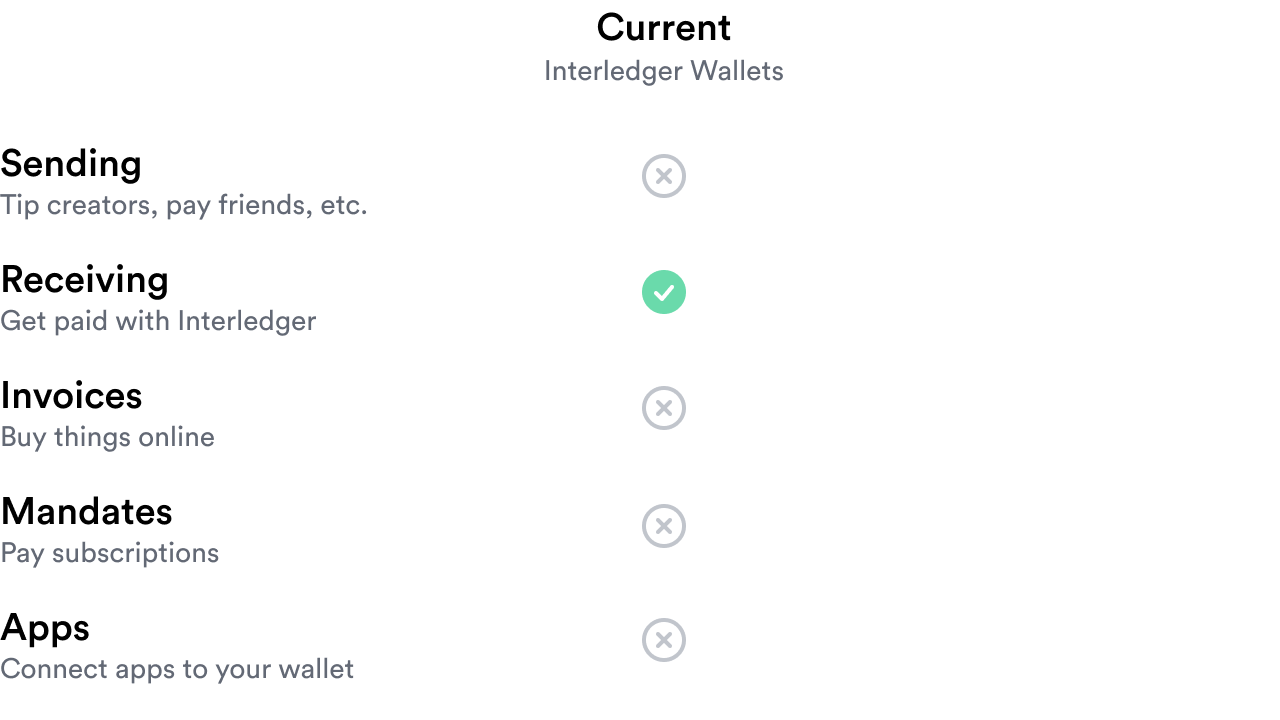 That's why it's time to embark on a new phase in the journey. We've proven that Interledger can work in practice, with real money, and compliant with payment rules and regulations. Now we need to unlock its full potential. And to do that, we're introducing Rafiki.

Many great standards saw their initial adoption accelerated by a popular open-source implementation. The Web had the Apache HTTP Server, Bitcoin had Bitcoin Core, and email had Sendmail. Having many of the complexities already solved in a robust and open way allows for much more rapid adoption and removes the redundancy of everybody having to implement all parts from scratch. 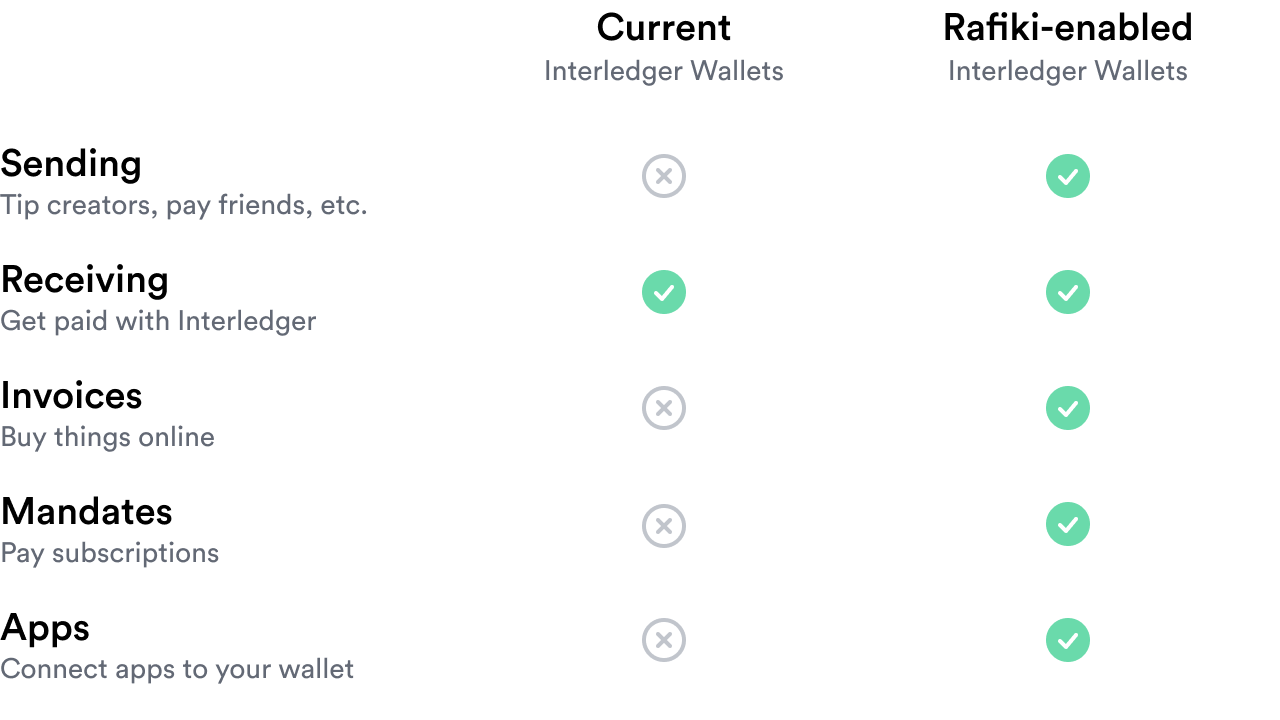 With Rafiki, we hope to implement most of the advanced Interledger features that our partners and users have asked for, such as:

We want all of this functionality to be available programmatically via APIs. The power of APIs has already transformed the payments space thanks to companies like Stripe and PayPal, and government initiatives like UPI in India and PSD2 in Europe. APIs allow payment companies to do what they do best: move money efficiently. At the same time, it has allowed developers to build amazing, payment-enabled applications without having to handle funds or getting their own licensing. Clearly, this is where the industry is going.

For Interledger, this direction has some interesting implications. Once Rafiki is deployed by at least one wallet, a simple Web Monetization provider could be built by anyone. All you would need to do is make a browser extension that allows users to link their Interledger wallet and then pays websites using funds in that wallet. Such an extension could easily add a tipping feature as well.

In such a world, it would also be a lot easier to pay for your Web Monetization usage with your own Web Monetization earnings because both pay-in and pay-out are tied to your Interledger wallet.

Finally, we heard from a lot of people who want to use Interledger for use cases other than Web Monetization. For example, podcasts, mobile apps, and virtual economies. All of this will be possible with Rafiki.

When Will It Be Ready?

We have already started working on the architecture for Rafiki and since it's an open-source project, we decided to make the development open as well. You can follow progress in the official Rafiki source code repository.

Rafiki is a very ambitious project and we will spend most of this year on the implementation. However, we plan to have a testnet instance up and running as soon as possible. There are a lot of Grant for the Web grantees whose projects depend on the functionality that Rafiki unlocks and this will allow them to start testing and developing their ideas. We are also already talking to our wallet partners about deploying Rafiki on the live Interledger network.

As we start assigning more developers to Rafiki, we have to pull them off of other projects. Sadly, that means sunsetting Coil Blogs, a publishing platform we launched back in 2019. Coil Blogs was the first-ever platform to provide exclusive content to Web Monetization-enabled clients. It succeeded in its mission to pave the way for other platforms to provide this functionality. But in the long run, Coil itself should not be a content platform. Our goal is to enable independent creators and smaller platforms across the Internet, not compete with them.

To find a new home for Coil Blogs authors and their audiences, we teamed up with Write.as and designed a way for your posts and drafts to be migrated over. Write.as is run by a team fully focused on enabling writers and publishers, and their values closely match our own. We're excited to continue collaborating with them on new monetization features using open technology.

Stay in the Loop

We're incredibly grateful to the community for all of your support, and speaking with and learning from many of you has only strengthened our resolve and underscored that the world needs an open approach to payments.