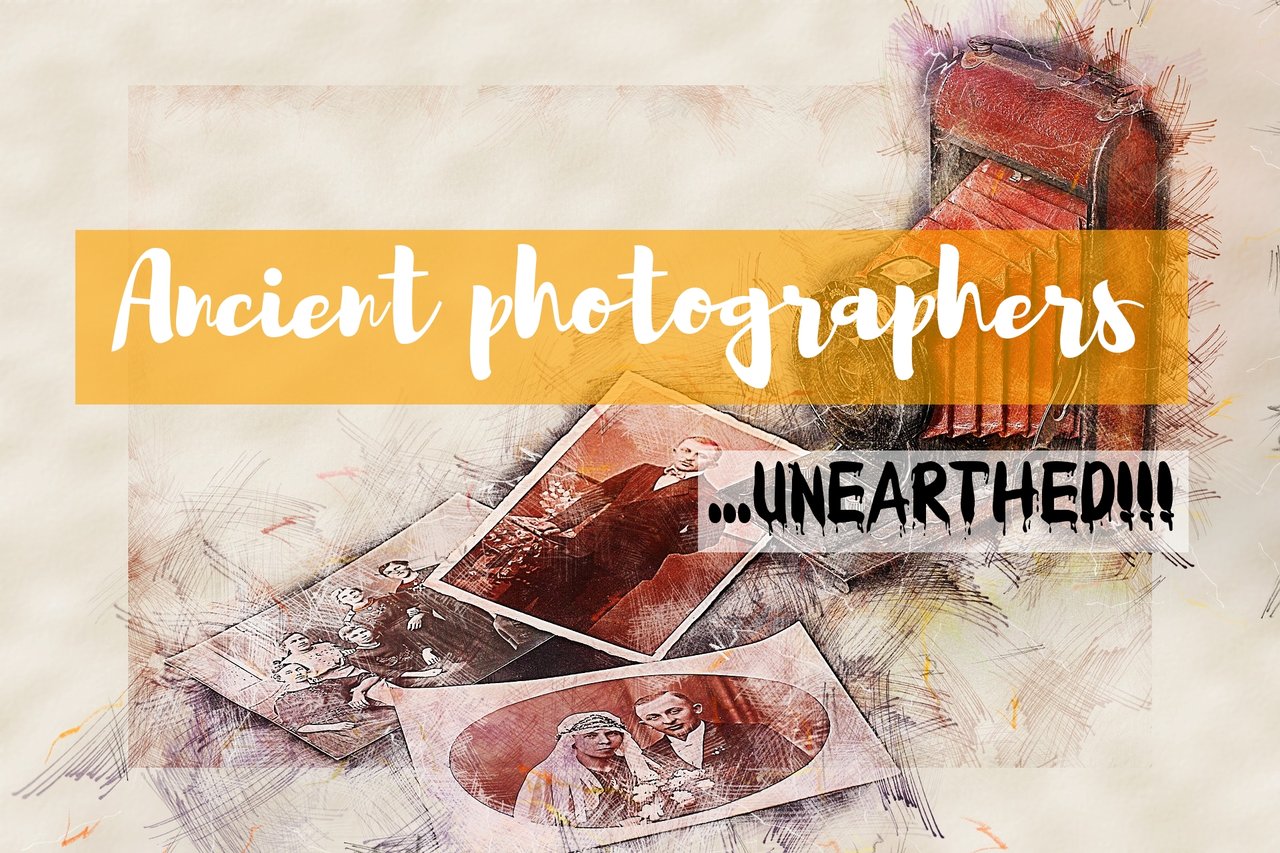 Hi and be very ❤ WELCOME ❤ to my blog post series about “Ancient photographers...unearthed!”

This is the second part of this series dedicated to those forgotten photographers whose photos have made history preserving important events for posterity. Maybe you have seen the first part already but if not, i invite you to step by HERE and take a look: that one was dedicated to Louis Daguerre, the father of “Daguerreotypes” but today we have a special guest to our blog: Girault de Prangey: the forgotten pioneer who photographed the Middle East for the first time!!!

You can take a look at another article written here at my blog analyzing one of the best photographic works Girault de Prangey did: the very first photographs ever taken of Jerusalem. You can check it HERE, but i highly recommend you, dear reader, to keep reading this article so you can know better who was he and why is he recognized among the best ones of all times, then you can go and enjoy the first and beautiful images taken from Jerusalem and transport yourself to year 1844!!!

His real name was Joseph-Philibert Girault de Prangey and he was born in 1804 near Langres, France. He was the last descendant of the lords of Vitry. He inherited, after the death of his parents and siblings in 1828, a huge fortune, which he used to defray his personal expenses, as well as his travels throughout his life. 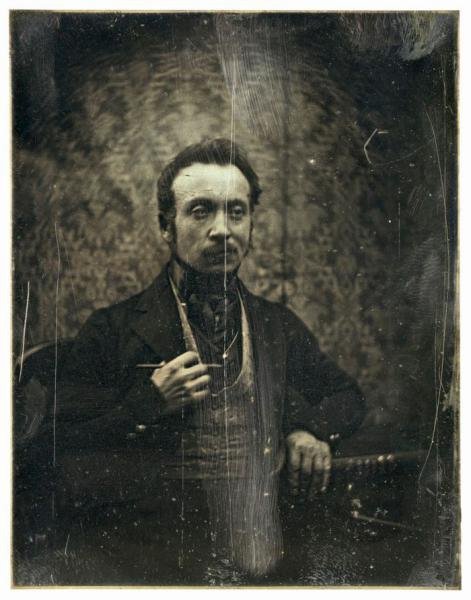 He first studied were letters and law in Paris in 1820 but by the year 1841 we found him studying painting in Paris at the École des Beaux-Arts and in that same year he learned daguerreotypy, possibly from Louis Daguerre himself! **:)**

Back in 1832 he undertook a trip to Spain, mainly to Andalusia, as the result of his growing interest in the Muslim world. During his trip, he made a series of studies and drawings of the main Muslim monuments in Andalusia and when he went back to France he published his work in a book: a great part of french society of that time was shocked by his drawnings.

In 1835 he dedicated himself to planning and building his private villa, carried out following the model of the Ottoman villas built on the banks of the Bosphorus in Istanbul. 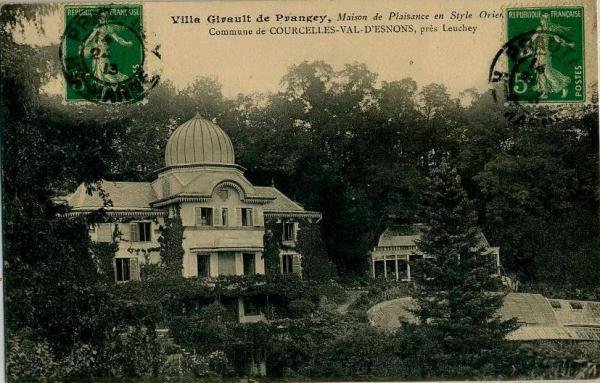 As he was heavily interested in Middle West way of life and culture he decided to spend a great part of his fortune in a travel wich will last 4 years from 1841 to 1844. He will be covering several countries like Italy, Greece, Palestine, Egypt, Syria and Turkey. Thanks to this amazing journey and the skills of de Prangey on photography, incredible photographs were recorded for posterity that take us hundreds of years ago to see the wonders of that exotic world as they were by then.

De Prangey's journey was really epic. It was an adventure full of stories worthy of a movie.

During his trip de Prangey produced more than 900 daguerreotypes of architectural views, landscapes and portraits. It was epic mainly because of the weight of the 24x19cm plate chamber, the plates themselves and the components for the daguerreotypes, which he had to move with him to be able to photograph. 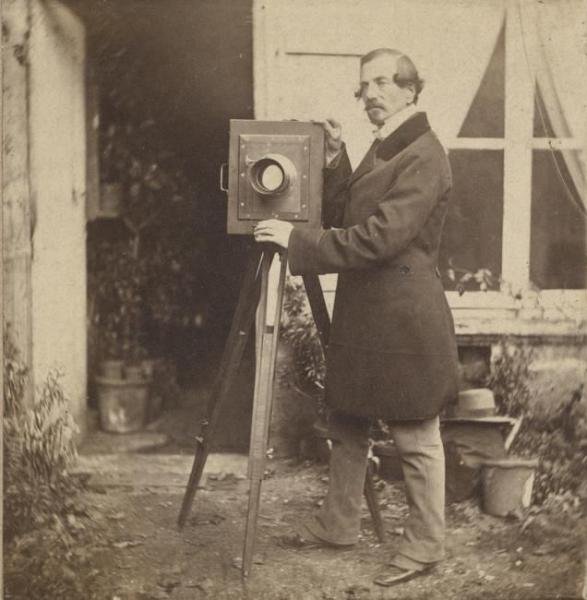 Fig 3. Girault de Prangey’s ‘Self-Portrait in the Garden’ (1860) - see the camera prototype he used during his travels, it was really heavy!

His journey began in Rome, at the Villa Médicis, then he went to Greece, then Cairo and Alexandria. After that he visited Constantinople and the archaeological sites of Asia Minor, while “keeping as far as possible away from the beaten track” – just for safety. He continued his trip, which was to last four years, by going to the Holy Land, Baalbek, Damascus and Aleppo.

Fig 4. Villa Médicis photographed by de Prangey when he stayed there(1842)

The daguerreotypes taken by de Prangey are the earliest surviving photographs of Greece, Palestine, Egypt, Syria and Turkey. Remarkably, his photographs were only discovered in the 1920s in a storeroom of his estate and then only became known eighty years later. In 1922, Charles de Simony, a French aristocrat, after acquiring the ruinous mansion of his distant relative(Girault de Prangey), found in the dark attic de Prangey's daguerreotypes: the history of photograph will not be the same since then....

De Prangey took many photos while he was travelling around Middle East and some of them are the first ones taken of a certain place, object or animals...he photographed people even, perhaps the first living persons photographed in Middle East. 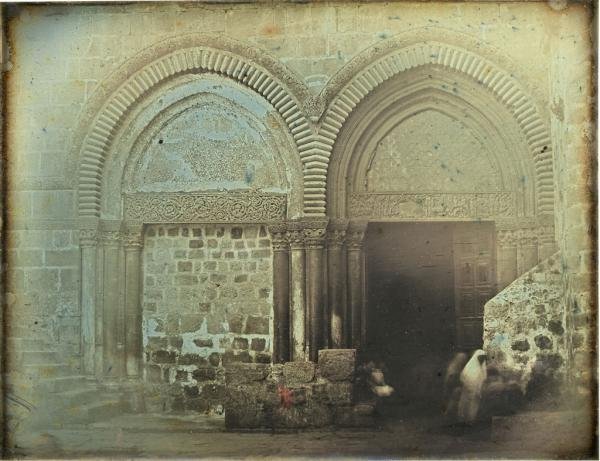 Many of the daguerreotypes taken are beautiful indeed and several of them were taken using a technique de Prangey developed consisting in fitting multiple exposures on a single oversized plate. Usually, the photographer using daguerreotypes, expose the whole silver plate no matter the light intensity over a period of hours maybe, to get the necessary sharpness in final image, using one plate for every image taken; but de Prangey experiment with several light exposures over the same silver plate which achieved spectacular effects and even clearer and sharpen image since the exposure was adjusted according to the level of brightness of the environment over the same silver plate, half by half, tooking one image of an object in one half of the plate using one level of exposure and then using the other half to take the same image using a different exposure time. In this way he took vertical panoramas of columns and minarets in Italy and Egypt, and horizontal vistas of Greece and Jerusalem.

Fig 6. Mosque of Sultan al-Hakim, Cairo, 1842. - it looks like a reflection but this image was a result of a technique developed by de Prangey consisting in using the same silver plate with different exposure times for the same object being photographed.

Fig 7. “Jérusalem: vue panoramique”, 1842 – horizontal view of the city of Jerusalem: de Prangey took vertical and horizontal images depending on the with and height of the object to be photographed.

Other daguerreotypes are really incredible due to it seems, based on the number of bluish skies, Girault also seems to have deliberately exploited a quirk of the medium’s chemistry to produce blue when overexposed. 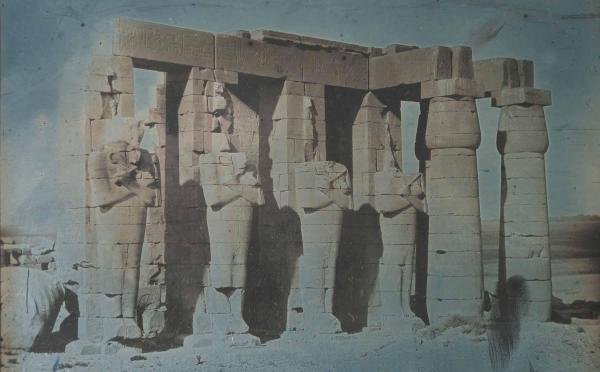 Fig 8. “Ramesseum, Thebes”, 1844 – observe the blue sky at the bottom of the photo behind the Ramesseum.

Here we have some of the amazing daguerreotypes Girault took during his jorney, besides those shown above, this ones deserves a place into this article too!!! :) 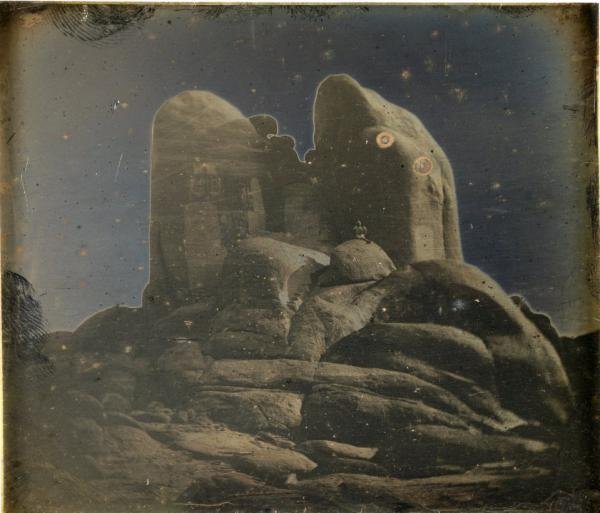 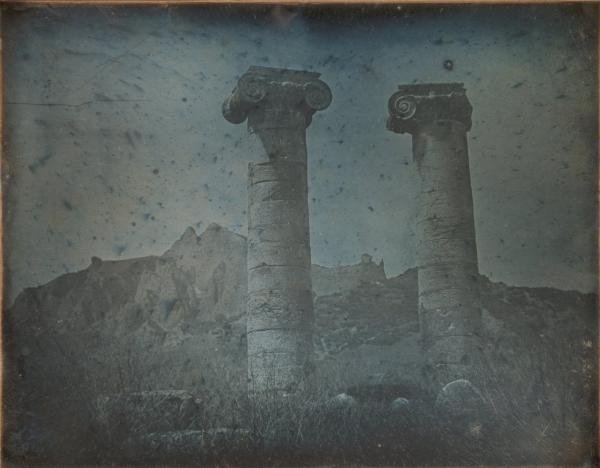 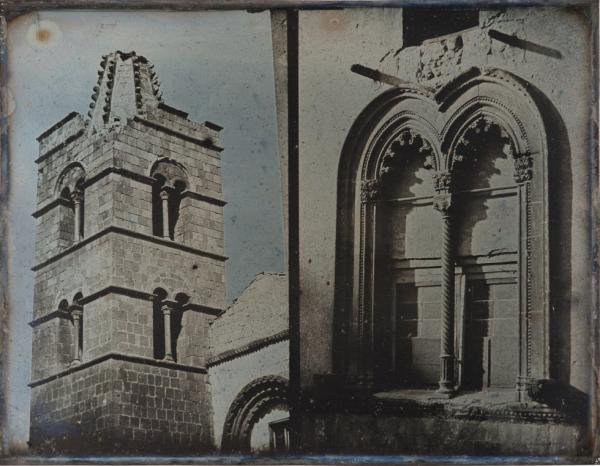 Fig 12. “Church and window tower, Cornetto”, 1842 - bluish skies were a constant in de Prangey's work, this daguerreotype looks like a colour photo!!! 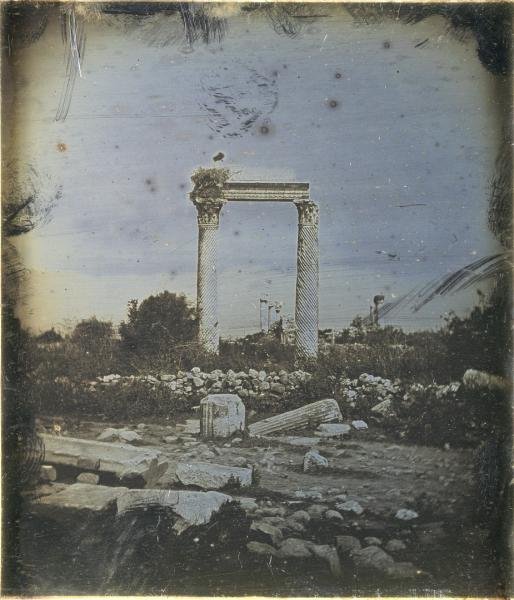 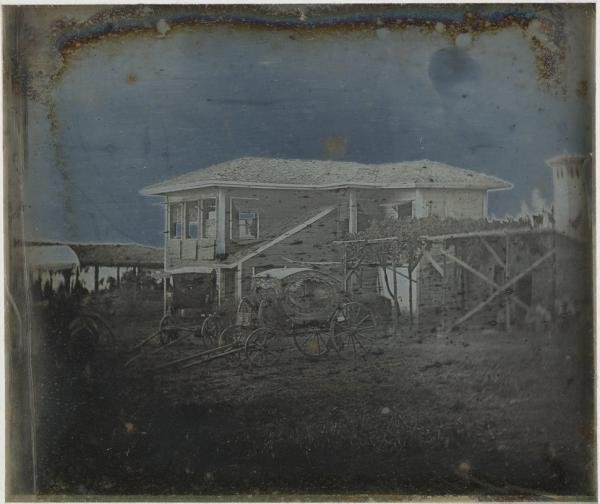 If you want to see more of the de Prangey's work, you can check the following link wich will take you to the French National Library website where de Prangey's work can bee seen in a virtual gallery they have.

Girault returned to France in early 1845 and made a luxurious publication composed of lithographs made from a selection of his daguerreotypes entitled “Monuments arabes d'Egypte, by Syrie et d’Asie Mineure” and later “Monuments et paysages d'Orient”.

In 1846, his writings led to him being elected as a member and correspondent of the Royal Institute of British Architect. However, the commercial and editorial failure of his last two books, which were expensive and published at his own expense, put a stop to his long-distance travels and work on architecture. He withdrew to his property of Les Tuaires while continuing to produce daguerreotypes until the 1850's. He devoted the rest of his life to growing exotic flowers and fruit in his greenhouse dying in 1892 at the age of 88, alone and held in his mansion.

Something very curious is that he did not exhibit or publicize his photographs during his life maybe because of, for Girault de Prangey, the daguerreotype was just a tool in the service of drawing, and precious because it provided exact reproductions of monuments and architectural details. He used to write on the backs of the plaques the dates and places where the daguerrotypes had been taken and when he published his first two books about his journeys, he made no mention of the fact that his lithographs had been produced based on his photos.

There are no doubts Girault de Prangey is one of the pioneers in the world of photography, title that was not recognized in life but well deserved, it was given in present days in recognition for his immeasurable work.

His photographs have preserved for mankind precious moments in the history so we can see now building and places like they were several years ago like the minaret of the Umayyad Mosque, which fell in 2013 during the Syrian Civil War. While all of Girault’s photographs are a portal to the 1840s, they also recall recent heritage loss in regions that remain volatile.

This is the 2nd part of a series of articles dedicated to ancient photographs. Many more series regarding vintage photos who immortalized weird and amazing things and their photographers are coming...just follow me to ensure don't miss even one of the articles that will be published.

One of the de Prangey's daguerreotypes was the world's most expensive photograph ever sold when in May 20, 2003 Sheik Saud Al Thani of Qatar purchased one of de Prangey's original daguereotypes for a world-record price of $922,488.

Do you want to know which one it was? ....just for my beloved subscribers friends, here it is: