First photographs ever taken of Jerusalem. 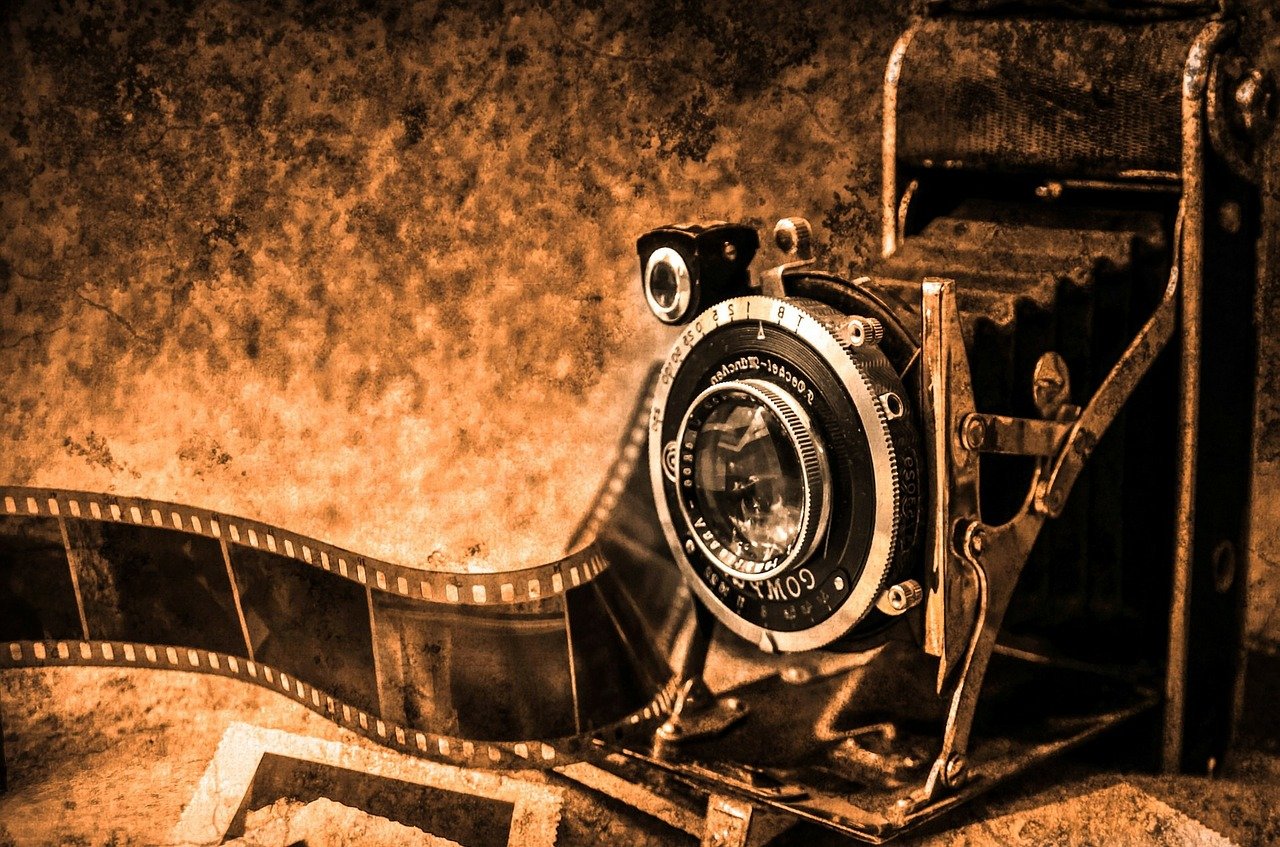 I am a crypto convinced guy but crypto bussiness apart, i am an avid seeker of interesting stories to share and to give my opinion about.

That's why today i want to share with you an amazing discovering i made respecting historical photograph world: the very first photographs ever taken of Jerusalem.

I am an appasionated about historical photographs(you can check https://coil.com/p/deyner1984/Historical-colored-photos-an-amazing-journey-/t7y-PjCUO) so, from time to time i search all over the Internet about the oldest, amazing and most incredible photographs ever taken and today i discover this collection of photographs that were taken in Jerusalem in 1844(you are hearing well: 1844!!!) by a French photographer Joseph-Philibert Girault de Prangey....but who was Girault de Prangey? 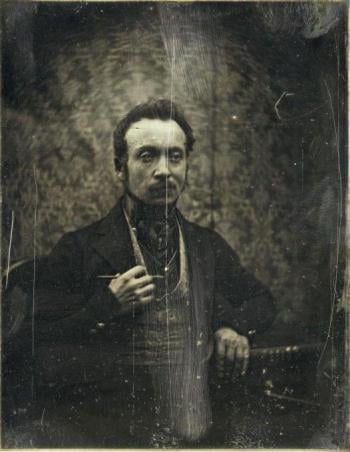 Girault de Prangey studied painting in Paris at the École des Beaux-Arts and in 1841 he learned daguerreotypy, possibly from Louis Daguerre himself or from Hippolyte Bayard. Girault de Prangey was keenly interested in the architecture of the Middle East, and he toured Italy and the countries of the eastern Mediterranean between 1841 and 1844, producing over 900 daguerreotypes of architectural views, landscapes, and portraits.

He was an avid traveler who takes hundreds of photos preserving those amazing moments for future generations, allowing us to know how was the life back those days, how looks the buildings by that time and how persons looks himself in a time not so far from our time but far away from the perspective of a human life cycle.

So you may think that this are not real photos: are daguerreotypes instead but the fact is the daguerreotype was the first commercially successful photographic process (1839-1860) in the history of photography. Named after the inventor, Louis Jacques Mandé Daguerre, each daguerreotype is a unique image on a silvered copper plate...so they are photos indeed!!!

In contrast to photographic paper, a daguerreotype is not flexible and is rather heavy. The daguerreotype is accurate, detailed and sharp. It has a mirror-like surface and is very fragile. Since the metal plate is extremely vulnerable, most daguerreotypes are presented in a special housing: like a picture in its frame.

This photos were taken in Jerusalem of 1844. So you have an idea of ​​what year we are talking about...that year:

1- The first electrical telegram is sent by Samuel Morse from the U.S. Capitol in Washington, D.C. to the B&O Railroad “outer depot” in Baltimore, saying “What hath God wrought”.

2- Charles Goodyear receives a patent for vulcanization, a process to strengthen rubber. 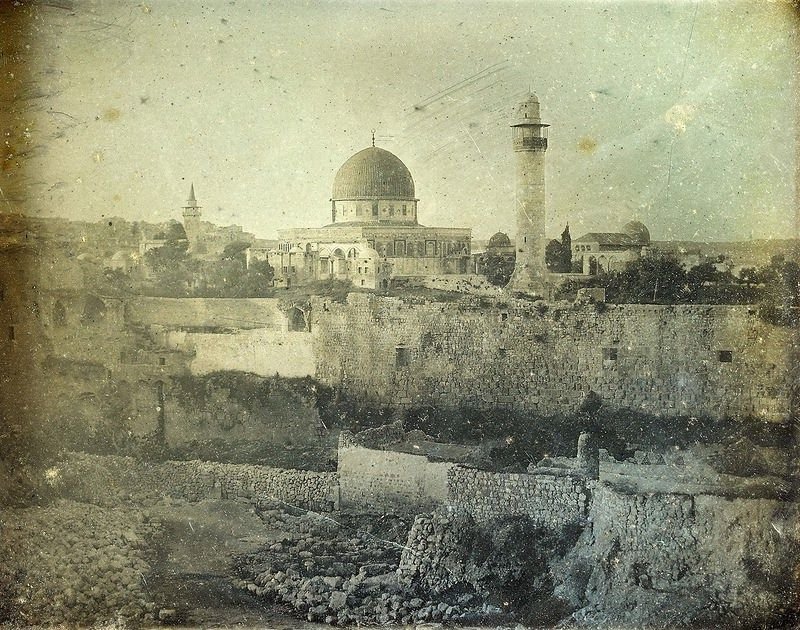 ...this photograph is showing a building with a domme and a tower. Maybe this particular building is tha famous “Domme of the Rock” and the tower near to is “David's Tower”...it is hard to say because the photographer did not leave any clues about this particular daguerreotype, so having in count in Jerusalem there are several buildings with dommes and a few towers but most famous are the “Domme of the Rock” and “David's Tower” we assume this view corresponds to those famous buildings. 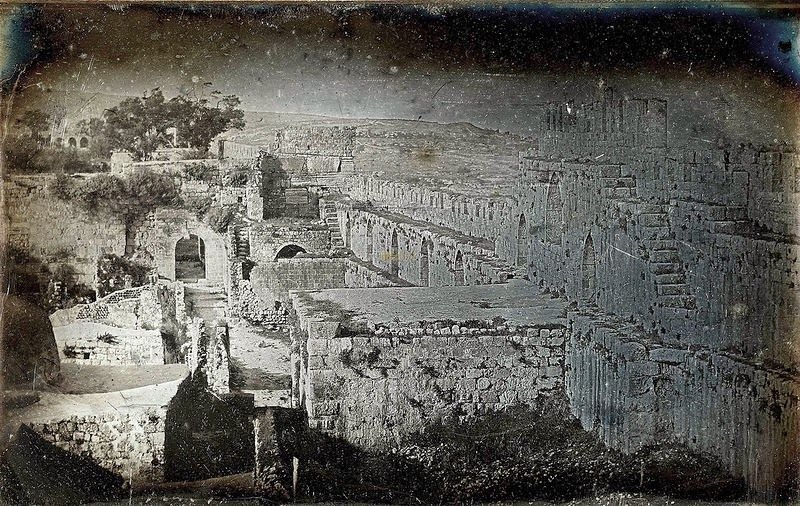 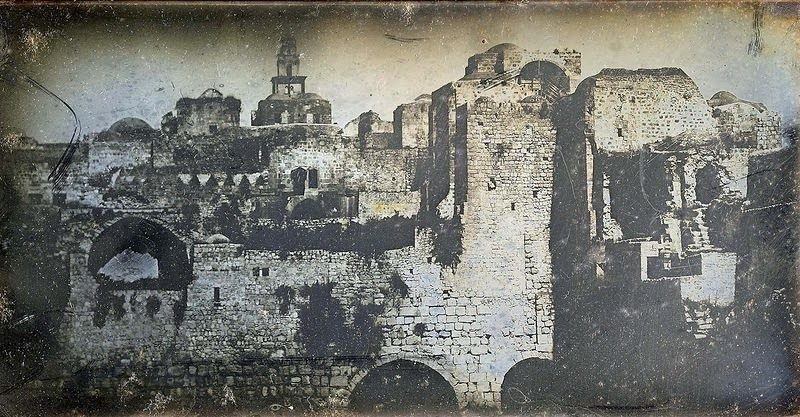 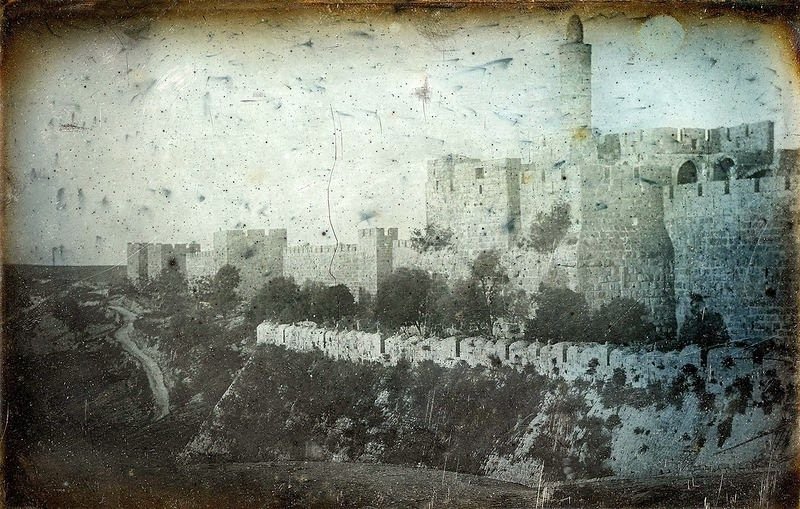 ...this three photos are showing a perspective of the “Old City” remarking its impressive defensive walls. 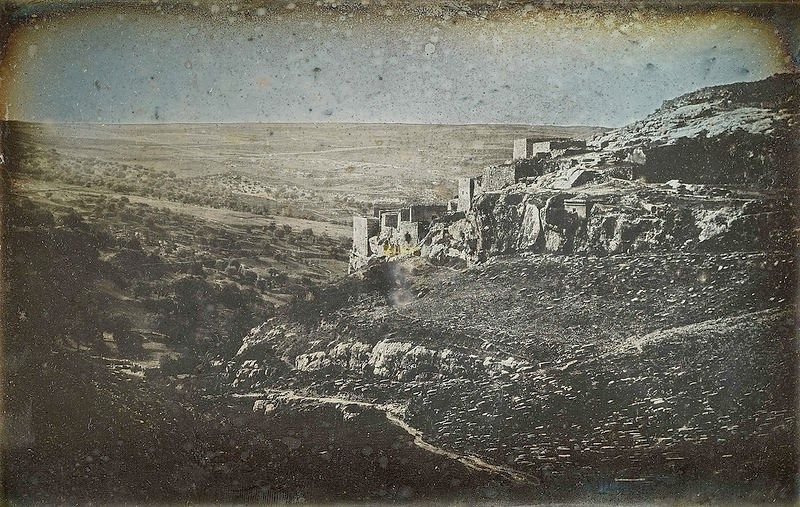 ...the last two photos shown the Kidron Valley from a very original perspective and the last one is, at least for me, the most impressive of all photos because it shows a whole view of the old Jerusalem as it looks in 1844 “in colour”, the only one colored daguerrotype of this collection.