The year 2020 has been quite challenging with the global pandemic, controversial elections and many other negative news. Fortunately, it cannot be all bad and it turns out 2020 has been a great year to be a crypto hodler, particularly with Bitcoin reaching an all-time high of just above $22,000.

Interestingly, Bitcoin traded below $5,000 in mid-March at the time the coronavirus was exponentially spreading across the world. The panic caused investors to pull their funds from traditional investments such as the securities and forex markets. Many decided to invest in the crypto market thus the steady rise of digital currency prices. Bitcoin traded at $22,067 at the time of this press.

Bitcoin’s price has so far surged by more than 400% in 2020 which represents quite an impressive gain. Bitcoin’s price performance is largely influenced by buying and selling forces. For example, many people purchased the cryptocurrency in the first half of the year thus pushing up the price of the cryptocurrency. The cryptocurrency enjoyed a lot of attention from institutional investors. For example, an insurer called MassMutual recently purchased Bitcoin worth $100 million and this purchase was arguably critical towards pushing up the price to its new high.

A look at XRP’s performance

XRP’s price was $0.559168 at the time of this press while its weekly low was $0.465994 and its weekly high was $0.583693. Its year-to-date performance shows that the price has barely changed up until the end of November where it experienced a notable uptick. However, the uptick was arguably linked to news about the Spark token which will be airdropped to XRP holder accounts at a 1:1 ratio. The airdrop may have encouraged more people to purchase more XRP so they could receive the Spark token.

Bitcoin does not seem to have a major impact on Ripple’s performance but that does not mean that it will not. XRP failed to rally during the coronavirus pandemic but it did rally slightly due to the Spark token airdrop, which also means that it did not yield to Bitcoin’s influence. However, the two cryptocurrencies may provide a guide on what might potentially happen now that most of the cryptocurrency industry is heavily bullish.

We cannot rule out Bitcoin’s potential impact on XRP’s price performance. A huge rally on Bitcoin’s part tends to encourage investors to purchase other cryptocurrencies even if there is no other underlying driving force. A major Bitcoin surge may thus influence price surges on many other cryptocurrencies including XRP. Such was the case in 2017 during the great crypto bubble which was subsequently followed by a huge market crash.

Judging by Bitcoin’s current performance, the 2020 surge is even bigger than that of 2017, which also means that it could potentially encourage more XRP purchases. The Ripple token’s performance in the last seven days indicates an uptick that was largely influenced by the Spark token airdrop but it may also have been influenced by Bitcoin’s rally. XRP reached its price peak at $3.10 in the first week of January 2017, after which it plummeted. This is around the same time that Bitcoin was also climbing down from its late 2017 peak.

Many traders analyze XRP by pairing it with BTC and evaluating the chart. Using this perspective reveals that XRP has been trading with a support level around the 0.000024 BTC price point which indicates that the cryptocurrency is still bearish. Crossing that support level would highlight bullish potential.

Some analysts expected XRP’s sub-$1 price to attract more buyers just like it did back in 2017 but so far it remains to be seen if that premise will work. XRP’s previous surge happened in the last week of December and ended in the first week of January 2017. Perhaps lightning will strike twice. The cryptocurrency seems to maintain high trading volumes despite the price remaining below $1 dollar. The cryptocurrency’s 24-hour trading volume during the latest trading session was $17.38 billion while its market cap was $25,485 billion.

Why does XRP remain relatively stable unlike Bitcoin? 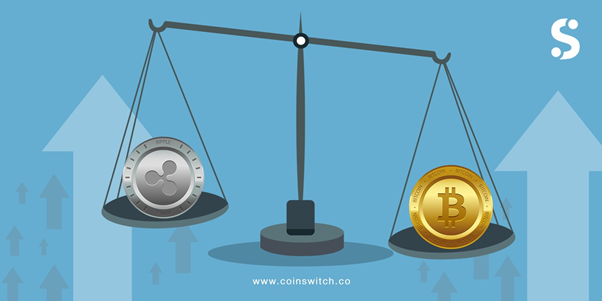 XRP’s price performance remains below $1 and it is not as volatile as many other cryptocurrencies. Its performance is like that by design. We have to look at the cryptocurrency’s native platform to understand why it behaves that way. The digital currency runs on a decentralized ledger called RIppleNet which was developed by Ripple.

Ripplenet rapidly become popular over the past few years especially in the banking industry thanks to its robust solutions designed to improve money transfer. The Ripplenet payment platform is important because it provides a superior gross settlement (RTGS) system that offers real-time remittance services. Money transfer that previously took hours and even days can now be sent instantly across the globe.

The Ripplenet ledger achieves the incredible improvements over traditional banking and remittance services thanks to XRP. The latter acts as the digital currency for Ripplenet-based services. For example, if one bank sends money to another foreign bank, they send XRP to represent the sent cash. In this case, stability is important and that is why the cryptocurrency is intentionally more stable than its counterparts.