I just remembered how I visited and explored Bilbao last year. I have some marks left in Google Maps to remember where I parked my car, and together with the old city center they form an almost perfect pentagon.

It's as if I tried to walk into the city from as many different angles as possible within my two very brief overnight visits. 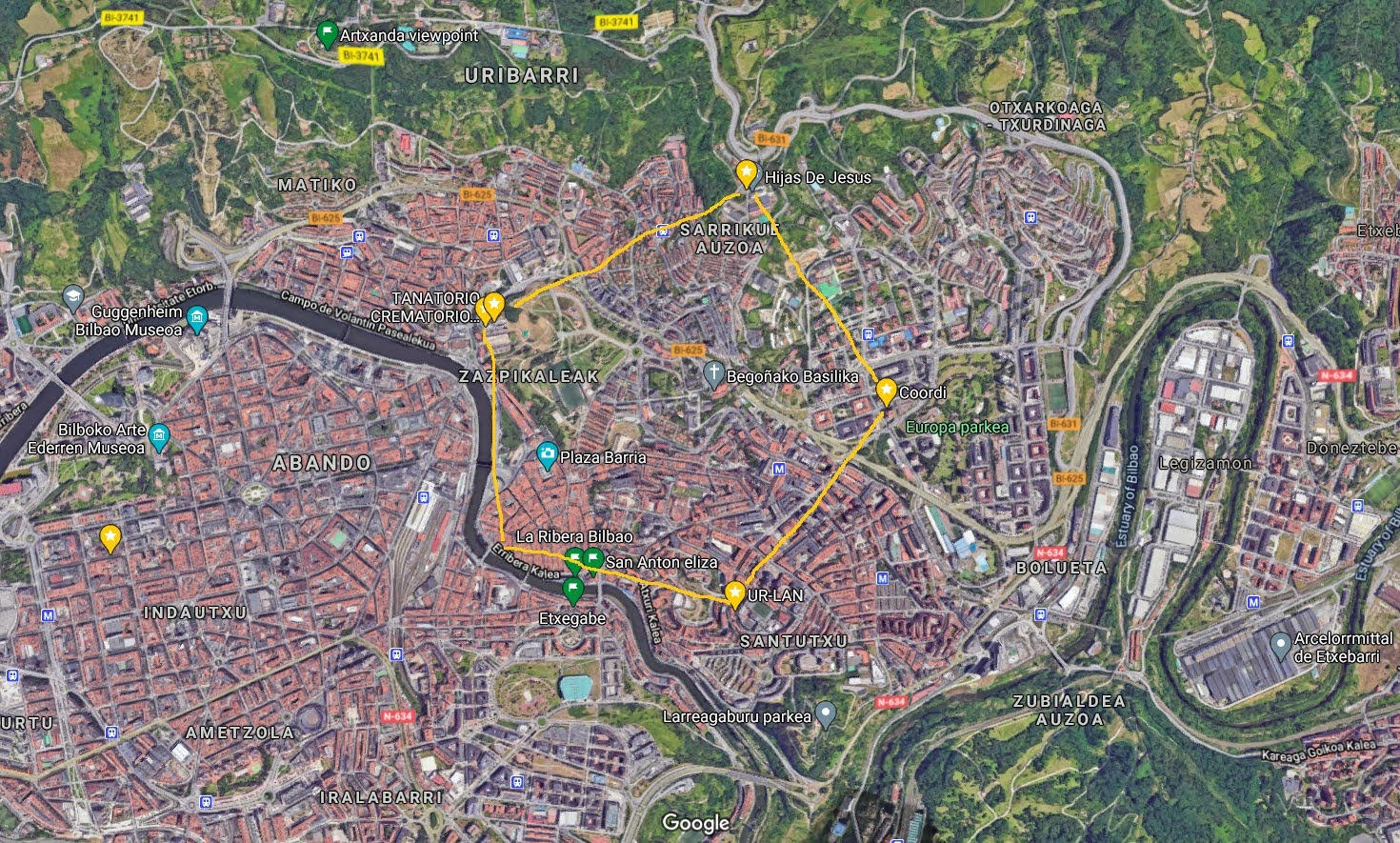 In the first evening when I arrived, I parked my car up north on the hill at the Hijas De Jesus, then walked down into the city and drank a non-alcoholic Mojito at a bar at the Estuary opposite of La Ribera Market.

The sugar really gave me some energy that I desperately needed. I had been driving from Bordeaux, stopping at the Dune du Pilat to fly my RC glider, in Bayonne for lunch and in San Sebastian, just to find out that everyone was wearing masks there.

After walking back to the car I drove to the Artxanda viewpoint to get a better view over the city just before going to sleep. It was amazing and a bit further north I found a very dark and quiet spot to sleep in the car.

The next morning I relocated my car to a free parking space in the southeast of the city to have an easier way back to the car in the afternoon. I still had some way to go.

I walked through the city to the northwest, first to the Guggenheim museum, which I really enjoyed, and then further through western and southern parts of the city and back through the train station to the car.

In the afternoon, I continued my journey to the west via Santander, a windy beach and Torrelavega to finally park my car close to a small village next to a cow pasture.

When I returned to Bilbao on my way back two weeks later I parked at the crematorium north of the city center and walked right into the oldest part of the city where I enjoyed a good dinner and a joint with a stranger from french guinea and then went to see different bars with him, in none of which either him or me paid anything as he seemed to be friends with everyone. It was a very enjoyable evening as I quickly gained more and more trust to this guy and more and more appreciated the tour he was taking me on.

All the bars played really nice punk-rock music and I especially remember one stop at Etxegabe, which seemed to be closed at first but at closer inspection turned out to still have life inside. We met some of his friends with one of whom he started a fight over remembering or not remembering a deceased friend. It was hard to watch and not being able to do anything about it.

After all I was happy to only have a short way back to my car at the parking lot of the crematorium and not having to walk all the way up the hill.

Right before I went to sleep, a garbage truck came to the parking lot and the guy driving it asked me to move my car. I was still pretty drunk and stoned, but moving the car just a few meters on the parking lot to allow this guy to use his fully automatic garbage truck seemed reasonable. It went well.

The next morning, employees from the crematorium approached me and kindly asked me to leave, so again I had to find a new space to park my car. Once more I chose the east of the city, went for a coffee and breakfast right there in an empty cafe situated within a square housing unit and then went for a last walk into the city before continuing to Urdaibai National Park to watch birds and go swim in the sea.

After all I feel like even just within these few hours I got a pretty damn good impression of Bilboa, which is still really impressive to me.

It reminds me of an anecdote from Osho's lecture “Above All Don't Wobble.”

It's about three travellers who came to Rome. They went to see the pope who asked them how long they were going to stay. The first said he would stay for three months. The pope replied: “Then you will be able to see much of Rome.”

The second traveller said that he could only stay for six weeks. The pope replied: “Then you will be able to see even more of Rome!”

The third traveller said he would only stay for two weeks, to which the pope replied: “You are fortunate, because you will be able to see everything there is to see!”

They were puzzled – because they didn't understand the mechanism of the mind.

I wouldn't claim that I have understood the mechanism of the mind, I just didn't have more time to spare on my way to Portonovo, but miraculously these very brief experiences had a very strong impression on me and my mental maps of the places I visited are pretty detailed.

And that feels good.