Last night I hung out with T. We saw The Green Knight, a 10:15 late show. It was a really last-minute thing, he posted a screenshot of the showtimes on his snap, I DM'd him, it just happened to work out.

Anyway, you would have liked the movie. I kept thinking that between different shots balanced just how you like. I would also think about how I wished it was you I was sitting next to, you whose skin was touching mine on the shared armrest. But I digress. My inciting incident happened after the credits started rolling- when my dumb ass left my phone at the theater. By the time I realized it there was nothing I could do until the place re-opened in the morning.

I gave these details to my mom who offered to collect my phone for me while I was busy at my internship. But, as it turns out, the details didn't matter. Fucking stolen. Go figure.

While this was going on behind the scenes, I was cut off from communication at my internship. I had no idea. I just figured my mom had gotten my phone and I'd come home to it. Which, thank God, because being totally cut off from it the whole morning was not ideal. Not only is it my DJ for my half-hour commute, but it's also my wallet for gas, which I was just about out of.

By the time my internship was up, my car was on E with an estimated 15 miles until I was Out out of gas. With my house, 11 miles from my current location, and obviously no phone to speak of, I scrounged up all the cash I could find which amounted to ten dollars. I figured that would be good enough to get me home. But, by the time I had pulled up to the pump, the five-dollar bill I'd just had in my hand was nowhere to be seen. Perhaps it went wherever my phone did, I don't know. So, if you're ever feeling spiteful, you can imagine me- hot, stressed, sweaty, and pre-paying for $5.25 worth of gas... in quarters.

When I finished pumping less than one and a half gallons into my tank thereafter, I was surprised to turn the car back on and now see that my new range, until I was Out out, was now 13 miles. Seriously, what the hell? For the rest of the drive, I prayed to make it home safely, which I did with two miles to spare, but obviously, I was stressed the whole time. You know how my brain loves to jump to the worst-case scenario.

I was ready to decompress for the weekend when my mom told me my phone was stolen. Then I boiled over.

Everything I had been stuffing down, every suppressed feeling, had now come to the surface. I yelled at my mom. Well, sometimes at her, but at times with her. Either way, I'm not proud of it.

I went away to think about it. I realized how easy it would have been in this moment to not explore my thoughts and feelings if I'd had my phone with me. Natasha has joked to me before that I always have my phone in my hand so I don't have to be alone with my thoughts. Alone with the longings for the places where our arms would touch. Alone with the memories of knowing that I had everything, and I took it for granted and, embarrassed that I fucked up, I lied about our situation and said that you fucked up. So no, she isn't wrong. I don't have to tell you that, I don't think.

Being that I still don't have my phone, however, I took that chance to reflect and sit comfortably in those thoughts. For a brief moment, there was a pain so searing, so consuming I swore I was dying. But I didn't shoo it away, I welcomed it. I looked at it, said, “This is a consequence of choices I've made,” and let it rip right through. And then it stopped. And then I sat down, and I wrote to find out what I'm feeling. There is so much simultaneous positivity and negativity in our lives that it's hard to tell sometimes if we're doing okay or not. I hope you stave off the line where things get blurry. I hope you're seeing everything clearly. I've attached a screenshot for you of the moment I think I started to. 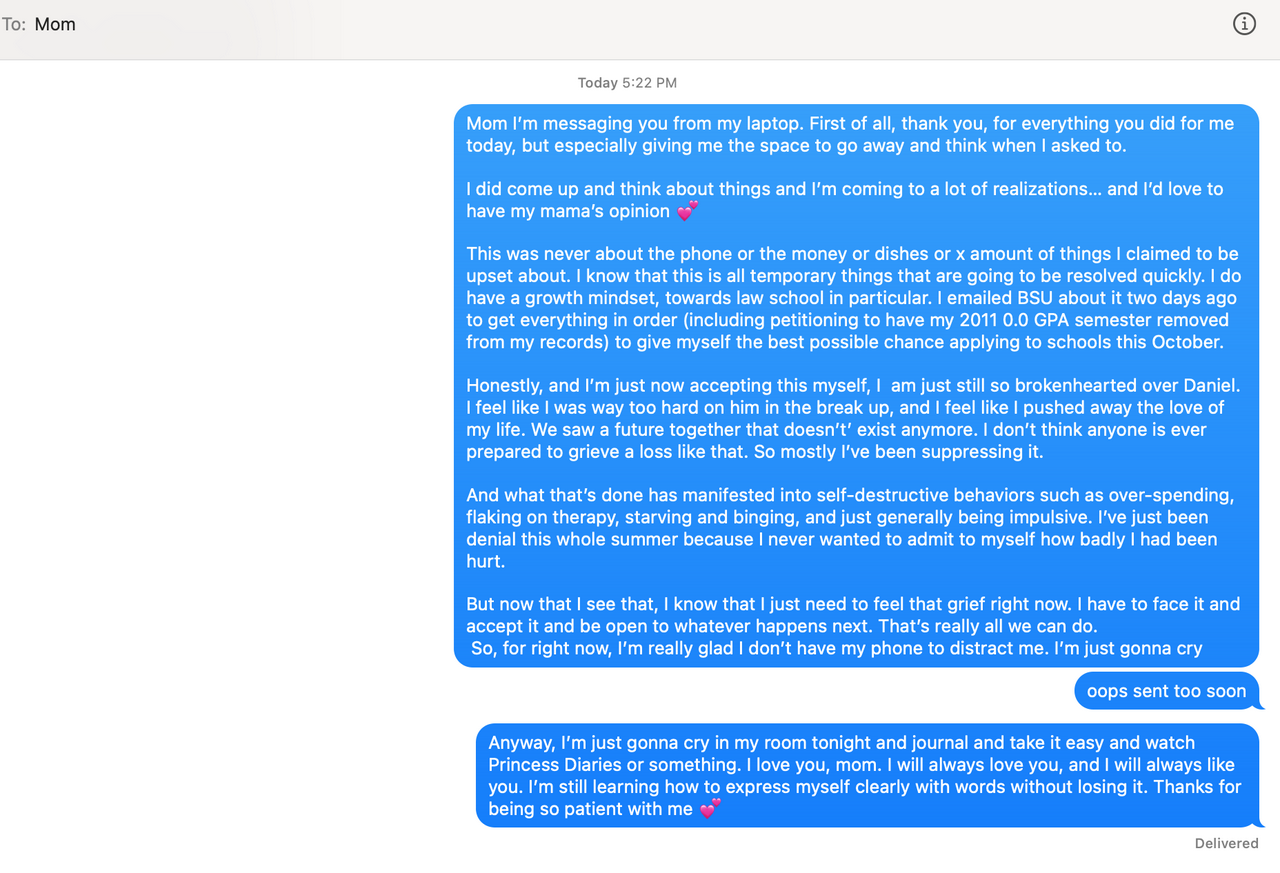