How I got here: Haleena Hussain, cyber security analyst

I’ve been working with Footasylum in some capacity for 5 years now but my role has changed a lot. Earlier this year I became Footasylum’s first cyber security analyst.

I took a job as a Christmas temp in the Bradford store in 2015. I was studying at Leeds Beckett University and took what I thought would be a temporary role as a sales assistant during my first Christmas as an undergraduate. As it turned out, my contract got extended and I worked in store during term time for the next 2 years. When I graduated, I accepted a full-time supervisor position which meant I became more involved in the day-to-day running of the store.

From stores to IT support

Shortly afterwards, I was accepted into the Footasylum Leadership Academy – an internal programme designed to develop management skills and overall retail knowledge by giving potential leaders experience across a range of our stores and departments. 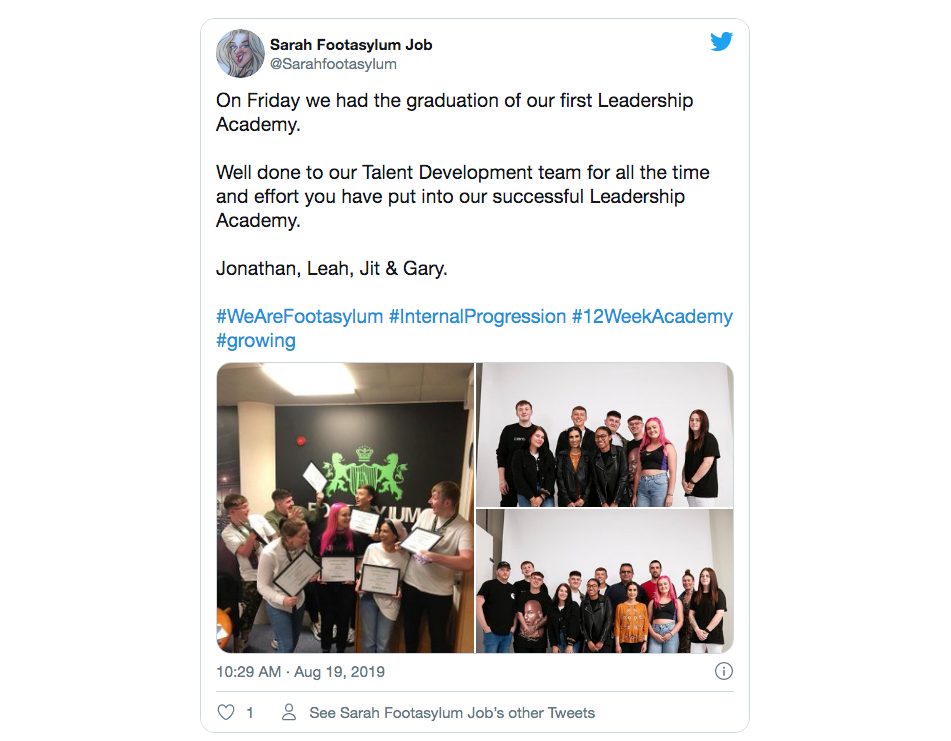 During my time in the academy I worked alongside different departments learning about what they do and why they're important within the business as a whole. When I spent time in the IT department, I felt like I was revisiting and using some of what I'd learnt at university – it's the first time I'd felt like that since I graduated. I'd studied Computer Forensic and Security. My course choice was partly influenced by american crime show NCIS because I thought working in digital forensics and supporting the police would be pretty cool. Although IT support perhaps wasn’t a natural progression from the degree, it was a closer fit than retail management. 😆

I didn’t have IT experience and the first I heard about the role was through one of the talent managers who must have been looking for internal candidates and recognised some potential in my CV. From there I agreed to meet delivery manager John and Head of Delivery Kim who chatted through the role and filled me in on the discovery they were doing into the IT we had in the stores, and how we might be able to improve things for our store colleagues.

My role in the Retail IT support team would be to respond to problems reported by store colleagues, for example, I was contacted by store colleagues when tills crashed or a back office computer was faulty. I already knew how systems worked because of my time in stores. I fed all this back to John and Kim so they understood the problems I was hearing about and therefore had a better chance of fixing them.

The way the office is organised meant that from my desk in IT Support, I could hear the security team chatting. The stuff I overheard about the problems they were solving sounded interesting but a position never came up so I didn’t think there was a way for me to move across. That’s how I’d always assumed people got jobs – someone leaves or a position is advertised, and someone takes it. But one day I was approached by Jason McCreery, Head of Infrastructure and Support. He told me there was a position coming up on the security team and asked if this was something I'd be interested in moving into because of my background.

The importance of cyber security

So, since March I’ve been working as a cyber security analyst. People tend to think cyber security is very technical, has a lot to do with looking at code and protecting companies from hackers.

But that’s just a small part of it.

It’s much more about raising awareness of why good security is important – both within the company but also in people’s personal lives. My role is mostly centred around working through cyber security policies and making sure they are communicated to colleagues in stores and in head office. I’ve been sharing best practices for keeping personal and company information safe, and putting procedures in place so that teams know what to do if security is jeopardised. Educating teams is a huge part of my role.

I’ve been really enjoying the work, and the engagement we’ve started getting has spurred me on. Colleagues around the business are starting to forward on emails they suspect might be spam or phishing which shows that they’re either more aware of possible problems or have begun to care more about working together.

We’ve worked really well with the communications and support teams to make sure we get our message out there – after all, there’s little point having policies or setting out procedures if the wider company doesn’t know they exist. I’m proud of our collaboration with comms.

I felt I fit into the IT team straight away. It feels like everyone is self-motivated to do a good job here which is why managers tend to be quite hands-off. Individuals have the freedom to self-organise. I report to the Head of Security, Ravinder Jamgotre. We have a more official team meeting at the beginning of each week to prioritise and a catch up at the end of each week to reflect. Ravi is around throughout the week too if I need him.

My favourite thing about Footasylum is that you don’t have to have a certain skill to get into an area you want to explore. Attitude is more important so if you care and you’re committed, you can move around because people are willing to give you a chance. It feels supportive. I’m glad I’ve stuck around for so many different roles.