How I got here: Hannah Williams, software engineer

My route into software development was a winding one – it certainly wasn’t something I’d had my heart set on doing when I was growing up. But sometimes, you have to figure out what you don’t want to spend your 9-5 doing to find out what you’ll find both challenging and rewarding.

This post is about feeling settled and excited in my role as a software engineer.

Stops along the scenic route

I have a design background. I studied the thought process of Design at Goldsmiths which touched on a really wide mix of areas such as politics and sociology. It was a fascinating way of looking at the world and its systems and one of the main things I took away from it was to always ask: why? It’s a lesson that’s stayed with me. My degree wasn’t a direct way into a specific career though and while I liked Design, to me it always felt like something was missing.

🍹 Bar work followed uni – I came out of my shell a bit.

I think after being in London for 3 years for university and then seeing a bit of the world, going home felt like a wakeup call and I told myself I’d only go back if I had a real reason to be there.

I’d been thinking about learning to code for a while and I’d done an introduction to programming course with Northcoders before I went travelling. Without getting a feel for it, signing up for the 9 to 5, every day for 12-weeks bootcamp would have felt like an expensive and time-consuming risk. Luckily, the introduction helped me realise that I liked the idea of learning a tangible skill which – by the end of the longer course – I’d be able to use to tackle problems and build something, perhaps that I had designed.

For me, being creative within the rules of code felt more focused than the abstract design stuff that I’d done my degree in where there wasn’t always a right answer.

So I completed the Northcoders Javascript bootcamp . I enjoyed the 50 hours of prep work leading up to the interview because it was already pushing me to commit to myself and the course. I enjoyed the 6:30am commutes to Manchester that I dedicated to extra coding time. These were massive indicators I’d made the right decision.

In the last 3 weeks of the course we worked in small teams on projects that built our confidence and challenged our abilities and approaches with new concepts, no longer heavily reliant on the tutors. We presented on our last day to students from the rest of the bootcamp and potential employers were invited too – Andy Norton, the dev manager at Footasylum Tech came along.

I’d taken a plunge, invested in myself and retrained. Now I wanted to make sure I’d be around people who’d also invest in me and my progression.

I applied for roles elsewhere but there was something about the Footasylum interview that made the combination of people who interviewed me (Kim Morley, Ian Wells and Andy Norton) – and their attitudes – really appealing to me.

They made it clear that they had read my CV, they knew about my experience (and lack of experience!), and that wasn’t what mattered at this point. There was no tech test, they just wanted to find out what I’m like and what my attitude to learning and collaborating is – essentially whether they thought I’d be a good cultural fit.

They thought I was. And I thought they were for me too.

The environment was what I’d wanted: open, honest, no need to pretend I knew more than I did.

I joined in November 2019. I was part of the Retail Store team – just in time for the busiest period: Christmas. I was apprehensive about the demands on us and whether the team would be available to support me during such a hectic time. I shouldn’t have worried. They helped me find my feet in the company and in my first tech role.

At the end of January this year I moved over to work on a new stock runner retail app alongside Equal Experts. Here's me, Richard Rauser and David Moore (both Equal Experts) and Emma Wailes from FA in the office.

It meant I was switching my focus from an established code base to being part of an app developing from inception. I also went from using Javascript on the bootcamp to learning Java in the retail team and then going over to native iOS and Swift for the app. My Footasylum mentor Ian Wells advised me on the power of being almost language agnostic with the ability to adapt approaches and processes across languages.

I have monthly check-ins with Andy Norton, and I’ve closely paired with Richard Rauser and other Equal Expert developers which has really helped with my progress learning Swift. I’ve been so impressed with how closely the devs and greater app team work. Working on my own stories I am given the room to puzzle over the task, but I am always able to ask for help when needed – even throughout lockdown I’ve felt supported.

It’s a luxury to be in this position but honestly, the support I’ve received is what I’d expected after the first interview.

Footasylum has been keen for me to get involved with meetups in the North West too. There have been some amazing ones for females in tech, for example, Thoughtworks hosted an Assenty event to showcase female tech founders which was inspirational. The company also sent me on Lauren Currie’s public speaking course – 3 days later I was presenting our app to the wider Footasylum teams and stakeholders. Here's a photo from my presentation. 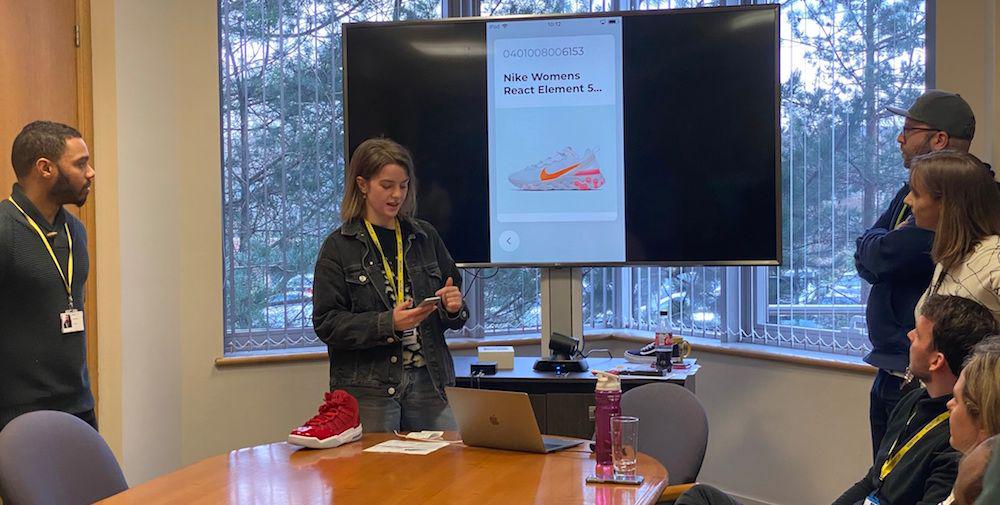 In the next year, I’d like to find a mentor from somewhere else in Footasylum Tech and improve my understanding of the wider department.