How I got here: John Sylvester, delivery manager

The title of this post says I’m a delivery manager – that’s true but that only became my role very recently. When I started at Footasylum Tech in November 2018, I joined as a product manager although actually, I was learning on the job. I’ve really valued having the freedom to learn, explore and change direction within the company.

A long history with Footasylum

I was a supervisor in the Preston store for around 4 years. I had a reasonable amount of responsibility – colleague rotas and training, cashing up, and the authority to make certain decisions. In other words: I was very familiar with how the in-store part of the business worked. And also, critically, which parts didn’t work very well. I knew about the situations in daily store life where the team had invented work-arounds to avoid stuff like tech melt-downs or long-winded processes.

At the time, the things the team had to tread carefully around were annoying but we’d just accepted that deliveries would not show up on the scanners and that we’d have to tick off each item on a piece of paper before manually entering that into some software. It was just a thing that happened. Fast-forward to now I’m behind the scenes trying my hardest to fix those things so that colleagues don’t have to waste time fighting with legacy tech – they can spend more time helping customers and providing a better level of service.

I spotted the job advert for a product manager in the newsletter that went out to store colleagues. I wasn’t very familiar with what a product manager was. The ad mentioned user stories and writing test plans which I didn’t have a clue about, but the overall gist of it was: come and help solve problems for store colleagues by designing the right stuff. I knew about all the problems – I lived them every day. The advert specified that the candidate must have store experience so I figured that very few people would have knowledge of – and even fewer would have experience in – that discipline. I’d worked briefly as a front-end developer (I got made redundant and that was partly how I came into my supervisor role) so I did have some experience in the tech industry.

Anyway, I applied. I got an interview. The stores had recently got some new till software and I was asked what was the one thing I’d have done differently when launching it. I said that I would not have launched it during the busy Christmas period. There must have been something in the way I said that that conveyed that I knew just how stressful decisions like that can be.

I started as a product manager 6 weeks later.

Joining at the right time

When I first joined I was based in our head office. Departments sat separately. We didn’t have multi-disciplinary teams at that point. There was a backlog of features that each department wanted. My main responsibility was improving the till systems.

Soon afterwards, Footasylum Tech hired more digital experts and all the above started to change. There was a shift towards experts from different disciplines working together on a single scope of work. Head of Delivery Kim Morley joined and threw out the backlog of desired features and we started a discovery in retail so that we could look at improving the till system in the context of the bigger picture. You can read more about the major changes that followed .

Asking questions to make sure we’re working deliberately and sensibly

My confidence to push back, disagree and challenge has grown such a lot. Asking questions has become very much part of my work. It helps me check in with what’s realistic, what we’re prioritising and whether those priorities have changed, whether the effort something takes would outweigh the value to the user. It helps me make sure we are working with integrity rather than simply following instructions. Working alongside Kim taught me that. It was honestly the best education I’ve had. Here's me, product manager Emma Wailes and Kim. 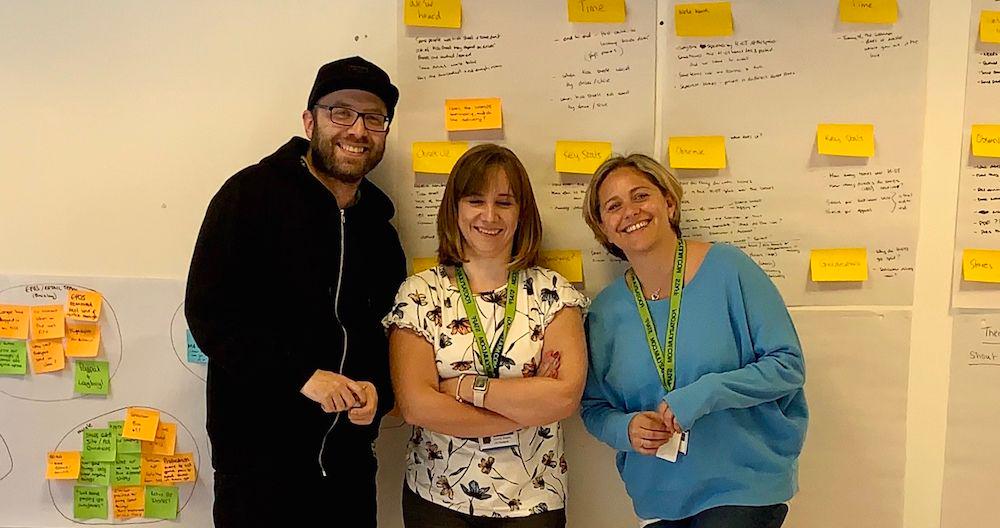 Service mapping and writing weeknotes have been 2 essential processes that have allowed our team to move quickly and efficiently. And both were new to me.

During the retail discovery we invited store colleagues in to help us map their daily processes so we could see the bigger picture and we could see where things were broken. Thankfully I’d done a Co-op Digital masterclass on service design the weekend before which really helped me understand and get the most out of the sessions.

Our service map was on the wall over at head office so that everyone could see. It sparked the attention of our CEO Clare Nesbitt and she asked for time with us to be taken through so she could better understand our work as well as the problems in stores. This is a brilliant example of how working openly means we can.

Also during the discovery Kim suggested I start to send weeknotes to keep relevant people around the business informed. Weeknotes reflect the agile way of working – a little update, often.

Opportunity to try on a different hat

We recently piloted an app we designed to make stock checking more efficient. We identified a colleague need and designed something to meet that need without having to deal with legacy systems. While working on that service, I realised my interest lay in delivery management rather than the specifics of product management and luckily I was able to make the move. It feels good to work at a place where I can pursue my interests and be given the space to learn and grow.