Comments on the Draft Stop and Search in Gloucestershire 2019 Report

The purpose of the report is to examine concerns relating to disproportional use of these powers based on protected characteristics, specifically Race.

This is my personal response to the draft report drawing upon experience gained from serving on the Stop & Search Scrutiny panel for nearly two years and work with Stroud against Racism (although confidentiality surrounding the report prevented consultation and debate with SAR).

The scrutiny panel is run professionally and appears to comply with its obligations and 'terms of reference'.

It is clear that the panel members are dedicated to their task and are properly supported in holding the force to account.

The executive summary says the Stop & Search report shows that;

However, important missing context is that the national picture confirms every constabulary in the UK exhibits racial disparity relating to stop and search.

The legitimacy of UK policing is built on relationships between the police and the public, but levels of trust and confidence are significantly lower among some Black people and racial disparities exist that we cannot fully explain.[1]

It is therefore surprising that there is contentment with the force's relative standing compared to other forces. In truth, the force is merely performing less poorly than the rest. It is rather disingenuous to imply it is comparing very favourably to the national picture.

Therefore, it comes as no surprise that the recommendation to explore, in greater detail, the racial disparity in the 2020 data lacks urgency.

The posture taken, in the executive summary, is not aligned with the current state of affairs, relating to race, described by Martin Hewitt:-

It is clear that the executive summary is complacent and lacks ambition.

The Local Context, the view from the beat, should inform any strategy.

In an attempt to demonstrate local context the executive summary draws heavily on two tables from a Govt. web site published in March 2019. These tables distil and sanitise the entire stop and search activities of the force in 2018/2019; detailed on page six of the draft report.

Stop searches in Gloucestershire per 1,000 by ethnicity.

From my work on the scrutiny panel and prior investigation, the data shown in table one piqued my curiosity. It didn't feel right.

The footnote in the report links to a Govt. site, which now shows the current latest data (2020), offering completely different ratios. An internet archive of the same page from 2019 confirms that the table was accurately transcribed from the Govt. web source.

After downloading the raw data for the period April 2018 – March 2019 it was reanalysed and confirmed the initial suspicion. Reality indicates that the table should be be presented like so:- 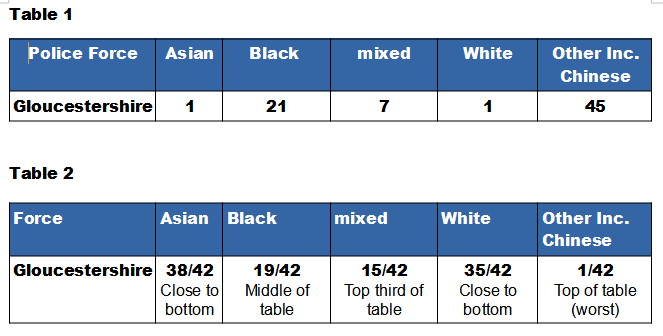 The 'Other Inc. Chinese' value may be a discrepancy between recording method vs. ONS stats.

If properly verified, the executive summary and recommendations, which rely on this data, should be revised. This is further evidence that the forces' posture, relating to racial disparity, is complacent.

Whilst the majority of the data, that the report is based on, dates back to April 2018 (we are now April 2021), there are numerous references to supporting documentation dated as late as September 2020. The version date of the report is February 2021.

Given the readiness to include more upto date supporting reports, why not reference the Govt. research about confidence in the local police, published in March 2020 long before last summers BLM protests? 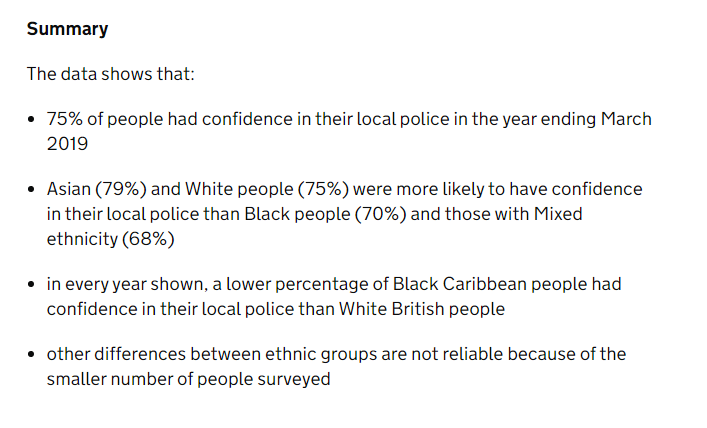 It is clear that events on the ground have now overtaken any actions to investigate and mitigate the causes so there is added urgency to get ahead of the curve.

Given the national picture, an additional hypothesis could be added (page 13).

Given that there is a trust/confidence deficit, seemingly 16% in the Black and 11% in the Mixed 16-24 year age group.

Could it be that this trust deficit will exhibit as being less co-operative when stopped, therefore leading to a search as a reaction to non-compliance?

Quite simply, white subjects are more co-operative/compliant as there is less of a trust deficit with this cohort?

The disproportionality seen could be for the simplest of reasons and, worse, it could be perpetuating a vicious circle.

One such documented example came to mind from a scrutiny panel meeting last October.

Is it not essential, in order to obtain a true picture, that all interactions between the police and members minority ethnic communities need to be recorded? This would appear to be the only way to analyse any bias introduced between the stop and the search. Stop and Account.