A personal account of the Constabulary's Stop & Search Community Scrutiny Panel (SSCSP). Sent to the Chair of the Police & Crime Panel at Gloucestershire County Council on 26th Oct 2021.

Although the SSCSP is professionally run, over the last couple of years the Constabulary has been quietly:-

The Police power of Stop & Search has had a troubled history. Called the 'sus' laws in times gone by and used disproportionally by the Police against minorities until repealed in 1981

Given the controversial history of these powers a new framework was established. The Constabulary voluntarily joined the Best Use of Stop and Search Scheme (BUSSS) in 2014.

Now, police officers have to have an objectively reasonable suspicion they will find something. The search has to be both necessary and proportionate. A detailed electronic record must also be made, including ethnicity.

To improve public confidence, trust and demonstrate greater transparency, a fundamental part of this new scheme ensured that searches can be reviewed by people from the community as well as local community groups and organisations operating in the county.

To this end the SSCSP was formed in 2016 and sits at the Police Constabulary HQ at Quedgeley.

The panel has the ability to interrogate all the stop & search data in various ways and check that each search complies with Home Office guidance.

Crucially, to protect both Police and citizen's personal details, anything discussed has confidential info suppressed before being relayed to the panel. A vetted individual verifies that the Police data is accurate as it's told to the panel.

Further, transparency ensures that when things go awry and complaints about the Constabulary's use of these powers rises above a threshold figure (currently set to one) the SSCSP is convened to review those complaints. Thereby, the community can see what's gone wrong and what steps have been taken to resolve the issues.

The Constabulary provides full administrative support to the panel discharging its duties.

The openness, scrutiny and transparency is essential to reassure the public that there is genuine responsibility and accountability for police actions. Indeed, over the last two years there have been number of representatives from minority ethnic organisations choosing to sit on the panel to witness its function, some only for just one meeting.

The SSCSP's original Terms of Reference concisely lays out this ambition.

Disproportionality must be explained

It is clearly demonstrable, without any doubt, that the Stop & Search powers continue to be used in a racial discriminatory way in each of the 43 Constabularies, Gloucestershire being no exception.

Forces should reflect on the findings of this report. They should analyse their data and either explain, with evidence, the reasons for this disproportionality, or take demonstrable action to address it.

The police service must be able to show the public evidence that their use of the powers is fair, lawful and appropriate, or risk losing the trust of the communities they serve.

The majority of the of the SSCSP's work involves checking that stops comply with Home Office guidance. Most do, some require a degree of interpretation as the accompanying details lack clarity.

To the best of my knowledge there have only been two complaints in the last two years. But, it came to light that neither of these were reported to the SSCSP as they should have been.

This behaviour was challenged at the time but the Constabulary response, rather than enabling the SSCSP to operate as intended, decided to ignore its primary purpose by choosing not modify procedures and processes within the Constabulary's own Professional Standards Department.

At a stroke this action neutered the ability of the SSCSP to properly scrutinise complaints in contravention of obligations under Section 3 of BUSSS and 2.6 of the Constabulary's own Stop & Search Policy. There is now no opportunity to learn lessons, no opportunity for the community to suggest improvement until many months, or even years after the event.

There is suggestion that there have been eight new Stop & Search complaints in recent months, possibly a consequence of political pressure to increase the use of Stop & Search powers. The Community representatives on the SSCSP may well be unaware this.

A report of dubious origin

During 2020 it appears that the report was repurposed to cover concerns relating to disproportional use of these powers against minority ethnic people. The report was finally published in July 2021. 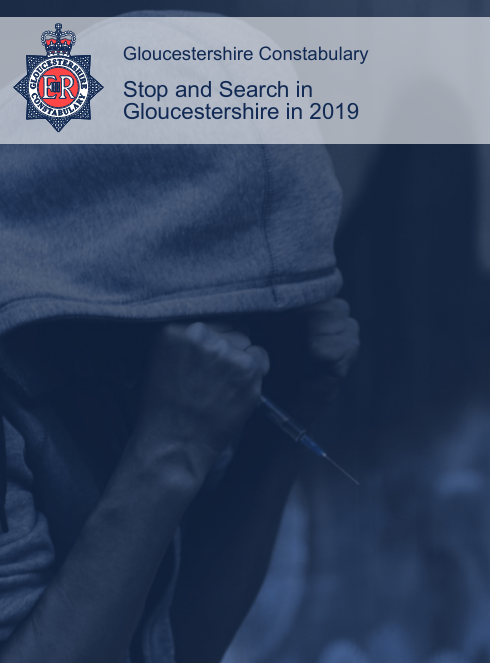 Despite three years in the making, the draft report appeared to be based on data of dubious quality, the tone was complacent and its conclusions unfathomable.

Curiously, and possibly deceptively, the sub title of the draft report read:-

The purpose of the report is to examine concerns relating to disproportional use of these powers based on protected characteristics, specifically Race.

Which was replaced in the final version of the Executive summary with:-

Analysis of Stop and Search data shows that Gloucestershire Constabulary compares very favourably to the national picture, with Stop and Search powers being used largely in line with the criminality they are targeting in the areas they are deployed.

My comments submitted April 2021 are here although confidentiality prevented discussion and consultation with Stroud Against Racism, one of the community groups being represented on the Panel, until after publication.

More importantly, the issues relating to the dubious quality of the data underpinning the report do not appear to have been addressed prior to publication.

The SSCSP was told in July 2021 that future meetings would become quarterly. A number of members were unhappy at this 66% reduction. The only explanation received was that this is the 'new normal' despite the Constabulary's obligation to provide the panel with a responsible officer and full administrative support as per the terms of reference.

Some seven years after signing upto BUSSS the latest Stop & Search ethnicity stats for the Constabulary show, quite graphically, that minority ethnic individuals are still up to 11 times more likely to be Stop Searched in the county than a white person. Described here. 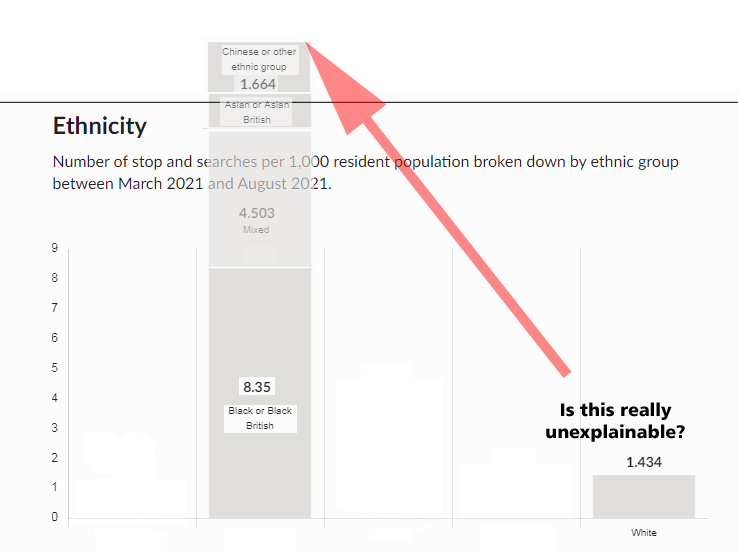 This worrying increase is of critical importance given the remit of the SSCSP, yet it could not be discussed at the October meeting. The Chair lamented 'I am not sure we will have time, if I'm honest – particularly as now we are meeting quarterly'.

In a move that will act as a barrier to participation the Constabulary are now demanding confidentiality agreements for all panel members, the CI informed me that:-

I have sought clarification from the Use of Force Panel and the Legitimacy Panel coordinators and they are working to a direction of 100% sign up to confidentially agreement, or members will then be removed having been given every opportunity.

The chilling effect of these confidentiality agreements will prevent panel members from properly representing their respective community groups. Further:-

There is a constabulary expectation that any information shared with a public scrutiny panel is treated in confidence....snip......You can of course share your own works and views with our panel and SARS but you cannot report back on panel agenda or discussion or outcomes. I totally understand your reasons should you wish to step down.

Reporting the agenda, discussions and outcomes of the SSCSP (where no personal information is ever disseminated) back to the community and community groups via their representatives is the entire raison d'être for these scrutiny panels.

Despite protestation, this 'constabulary decision' forced me off the SSCSP as it prevented me from fulfilling my obligations to the community group I represent (SAR).

To further restrict participation the Constabulary is also working towards vetting panel members in order to view Body Worn Video (BWV). Clearly, technological solutions, such as the blurring of faces, would be far better solution and within the original remit of the panel and also protecting privacy.

Stroud Against Racism is a grassroots community group based in Stroud and has 3400 members spread around the county.

Because of the current political climate and various elected representatives openly stoking a 'culture war' there are few routes for individuals or community groups, like Stroud Against Racism, to formally raise their concerns with any prospect of being taken seriously.

So, when the OPCC & Constabulary announced their Building Stronger Communities Roadshow last September, the group asked questions of both the Chief Constable and the Police & Crime Commissionaire. Astonishingly, despite copious notes being taken by their respective PA's and a follow-up e-mail, the group has never received a formal response.

I believe that all the issues raised here collectively demonstrate deeply embedded institutional and structural problems. There is an imbalance of power and an unwillingness to reform. I am calling on your committee to ask questions of the Constabulary and OPCC.

Response received by e-mail on 13th Nov 2021 from the Chief Inspector.