Stroud Against Racism vs. Gloucestershire Constabulary

Following Stroud Against Racism's recent complaint against the Constabulary I would like to thank Chris Nelson, Gloucestershire's Police & Crime Commissioner, for facilitating a meeting, on the 24th August 2022, to hear the groups outstanding concerns. 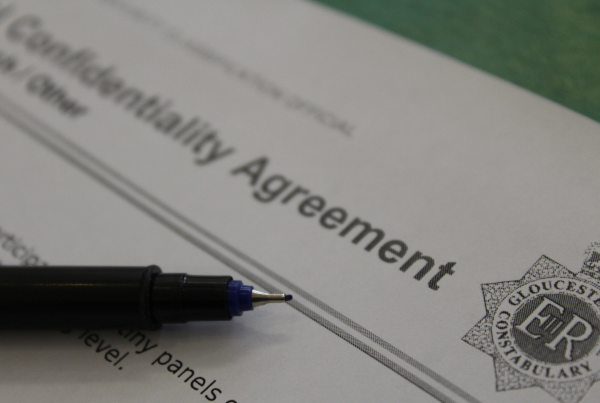 SAR's concerns were focused on the recently mandated Confidentiality Agreements. SAR believes that these draconian agreements are preventing proper participation of community organisations via representatives serving on scrutiny panels. This impacts on community engagement, robust independent scrutiny, oversight and accountability.

The meeting was business-like and focussed on the issue at hand and only briefly touched on the recent complaint. It was determined that the primary purpose of the confidentiality agreements was to protect any personal information that may get disclosed to those serving on the panels.

Once we understood that their use could not be rescinded, we asked in the strongest terms possible, to ensure these Confidentiality Agreements are re-written and only used to protect personal information without hindering dialogue with a representative's respective community group or possible wider community engagement

Clearly, there is a tricky to balance that has to be made, but with a commitment to a fundamental review, relating to Stop & Search policy, the meeting ended in consensus. We all had a much clearer understanding of each others concerns.

It's been a long journey and we did indicate that in future we would prefer tough dialogue rather than formal complaint, I think there was consensus on that too.

Subsequent to the meeting British Future released An Agenda for Action An interesting and somewhat controversial read, however point five in the chapter Fairer & Fewer, Reforming Stop and Search being particularity relevant and was discussed.

There's absolutely no reason why Gloucestershire Constabulary could not take a national lead on reforms such as these.