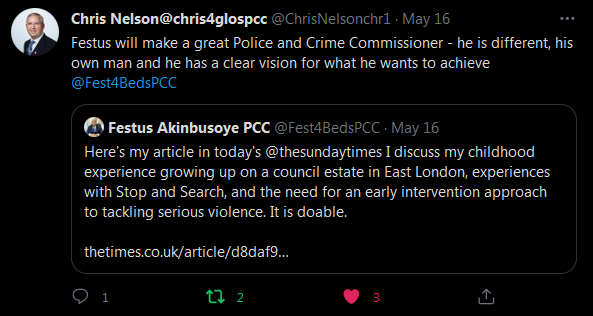 The 'tweet' piqued my curiosity as Akinbusoye, also recently elected, has defended the use of stop and search despite being pulled over six times.

The article in, The Times, is behind a paywall, but there is an archive here.

Reading the article revealed that:-

Akinbusoye believes that “profiling” has resulted in black people being disproportionately affected by stop and search, but the father of four children, aged 5 to 17, argues that no bereaved parent would want to see its use curtailed. “They want it [used] more,” he said.

I replied to Chris Nelson's tweet asking if he thought that profiling accounts for the 8 times disproportionality with Black Stop & Search in Gloucestershire? No response has been forthcoming.

Despite numerous promises that report has still not been released and I have had to submit to 'confidentiality' in order to view it.

Once it is released, however, I will publish my response to it, this was submitted to the Constabulary on the 7th April 2021.