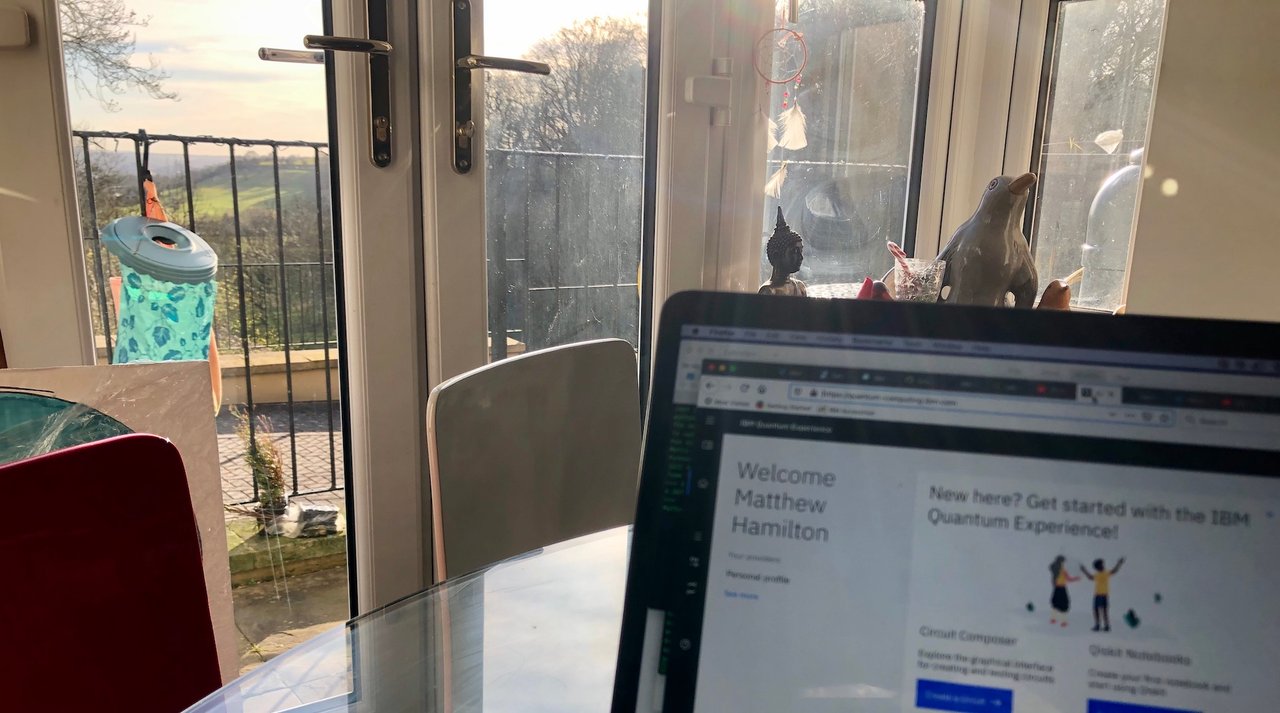 So it has been a very strange week. I'm not on the train as I usually am about now heading to London, but instead working from home self-isolating. Two of my colleagues attended and spoke at a conference recently in which there have been some confirmed cases of Corona virus, and so as a precaution, having spent the day with them last week I'm now also self-isolating. The risk is likely low, but my daughter has had a cough and been off school all week ill, and both my wife and I have got sore throats. Most likely just the general winter lurgy, but rather not take the chance, and so keeping movement down to a minimum.

But still... lots happened last week... as I mentioned, I went up to London to meet up with the team, and another new starter, Liam, was joining us too. Due to other events going on, we only had half the team out to lunch. 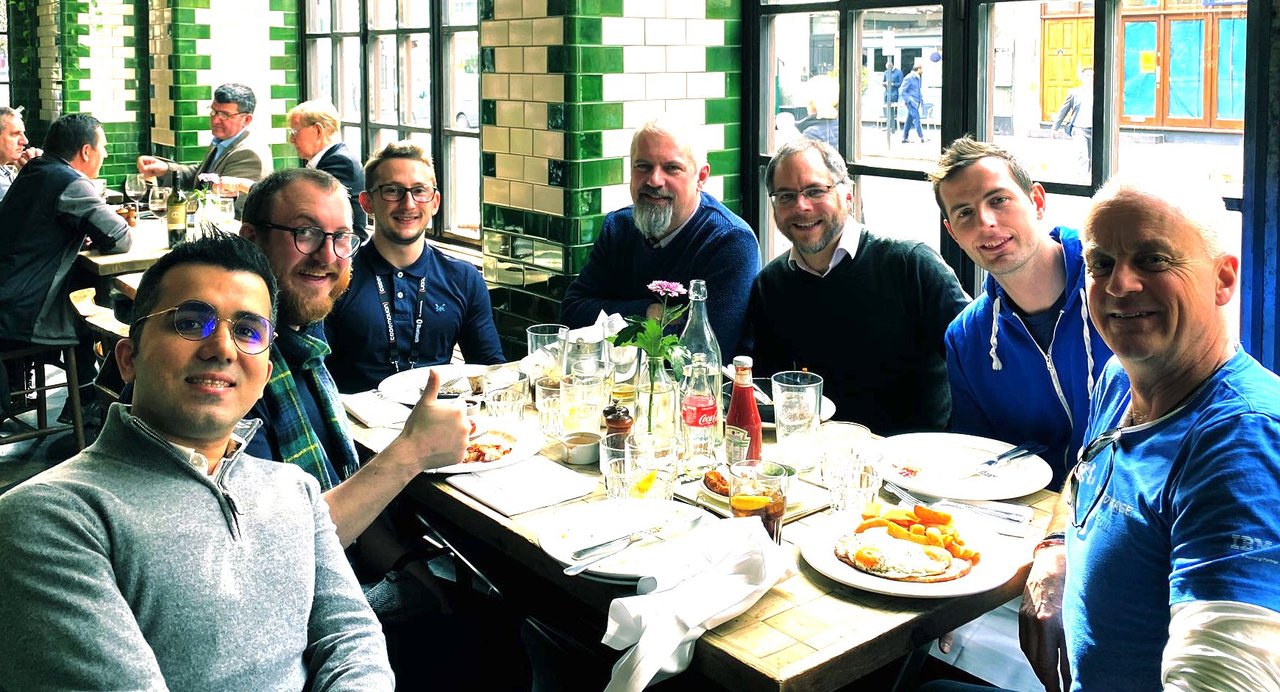 No, the team is not all male! By pure chance, Margriet, Yamini and Angela were not able to make it. But still it was great to get to meet some more of the Developer Advocate team I will be working with.

This is, of course, a big topic on everyone's minds. My new role involves going to speak at conferences and meetups i.e. where lots of people are. Most of the major tech companies have all cancelled their big developer events. Apple's WWDC, IBM's Think, Google I/O... all have had to cancel physical manifestations and go online-only. This could potentially have a silver lining as a lot of these event by their very nature have been self-selecting. Unless you have the funds to travel across the planet and stay in a hotel then you can't attend. And whilst there are some remote opportunities, being there is the main attraction. By moving to online-only it will put everyone on an even footing and hence be more inclusive by its very nature.

Many smaller conferences are being cancelled too. I was due to be speaking next month at DragonPy in Slovenia. I was very much looking forward to visiting Ljubljana, but that will have to wait until later in the year. The organisers have done the responsible thing to postpone it.

Local meetups are also being cancelled or moved into an online format. One tidbit of history I learned today, was that meetup.com itself was founded in the aftermath of the 9/11 attacks on the Twin Towers in New York City as a means to get people out and meeting face to face and build community. So it has historically eschewed advertising online events as that was against the original ethos of getting people face to face. But, they have realised that changes are needed at the moment, and have said they are happy to promote meetup events that have moved to an online format for now.

One thing that has come out of this virus is a great visibility of data visualisation as a tool to try to explain what is going on. The number of people confirmed infected by the virus is doubling every 2-3 days. In some ways this has been so striking because of the stark reality of exponential curves. And if you plot an exponential curve on a logarithmic scale, then you get a perfectly straight line. It is almost eerie how perfect some of these lines fit and how all these countries are following in the exact same trajectory as Italy, just delayed by a week or two. 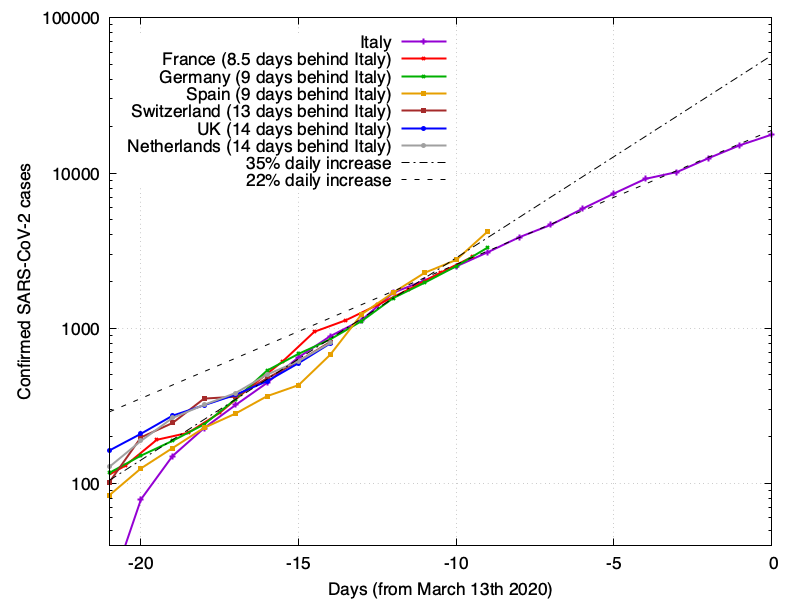 This was taken from the excellent work on CoVID 19 Worldwide Growth Rates by Mark Handley at UCL.

Another very well written article from a data science perspective on this is from the people behind fast.ai and explains a lot about the pressures it will put on the health systems around the world. It includes [although I don't think was the original source of] this, now famous, chart and the phrase “flattening the curve”.

This chart shows how we have a finite amount of medical capacity (beds, ventilators, medical staff). By taking measures to slow the spread, even if the total number of people affected remain the same, we can “flatten the curve” such that is is less of a shock to the healthcare system.

I won't repost all the heartbreaking tweets coming out from Italy at the moment, but suffice to say, it is not a good situation. And it will be hitting other countries too to a greater or lesser extent.

The Washington Post published a fantastic simulation that showed the effect of how “social distancing” can greatly reduce the spread of the virus. It show several scenarios and lets you visualise the spread of a disease through a population. 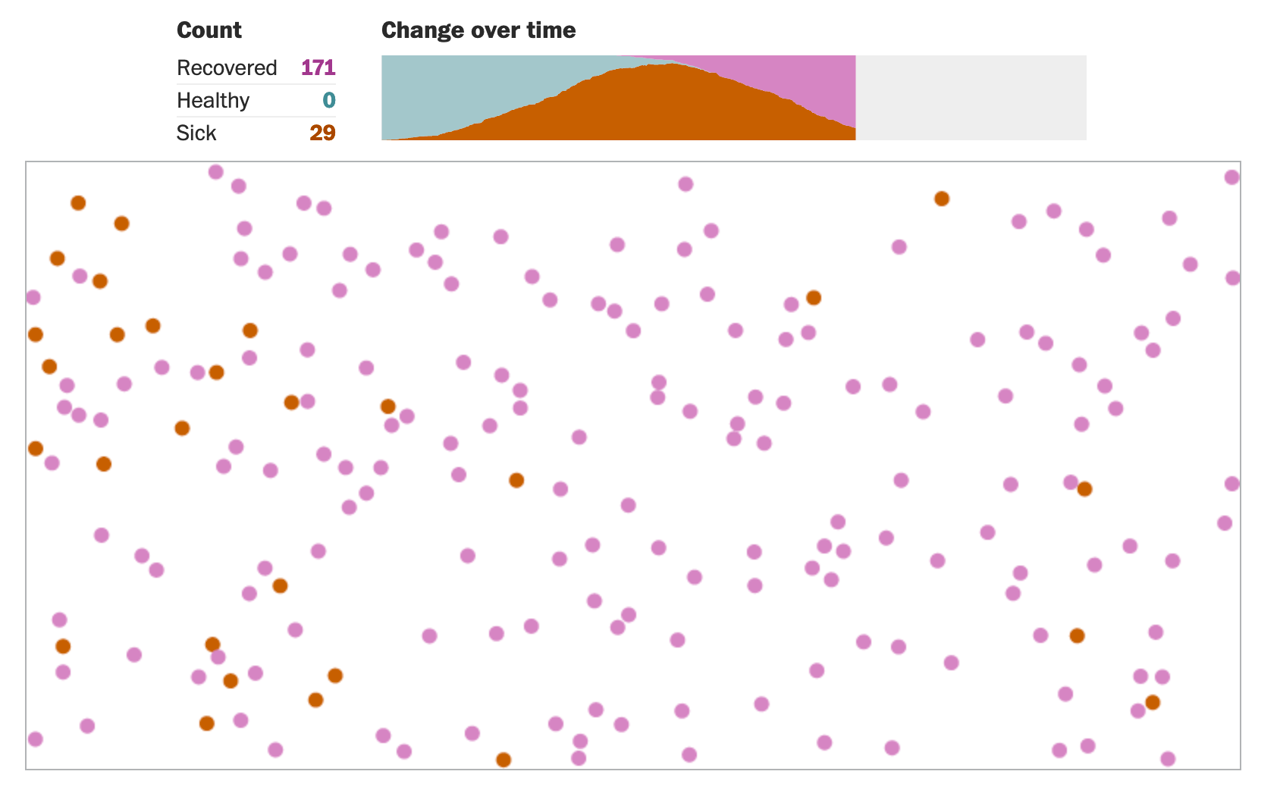 And lastly, a visualisation that has nothing to do with Covid-19, but I found amazingly powerful in how it shows data, is a piece published in the New York Times: How Working-Class Life Is Killing Americans, in Charts By David Leonhardt and Stuart A. Thompson. 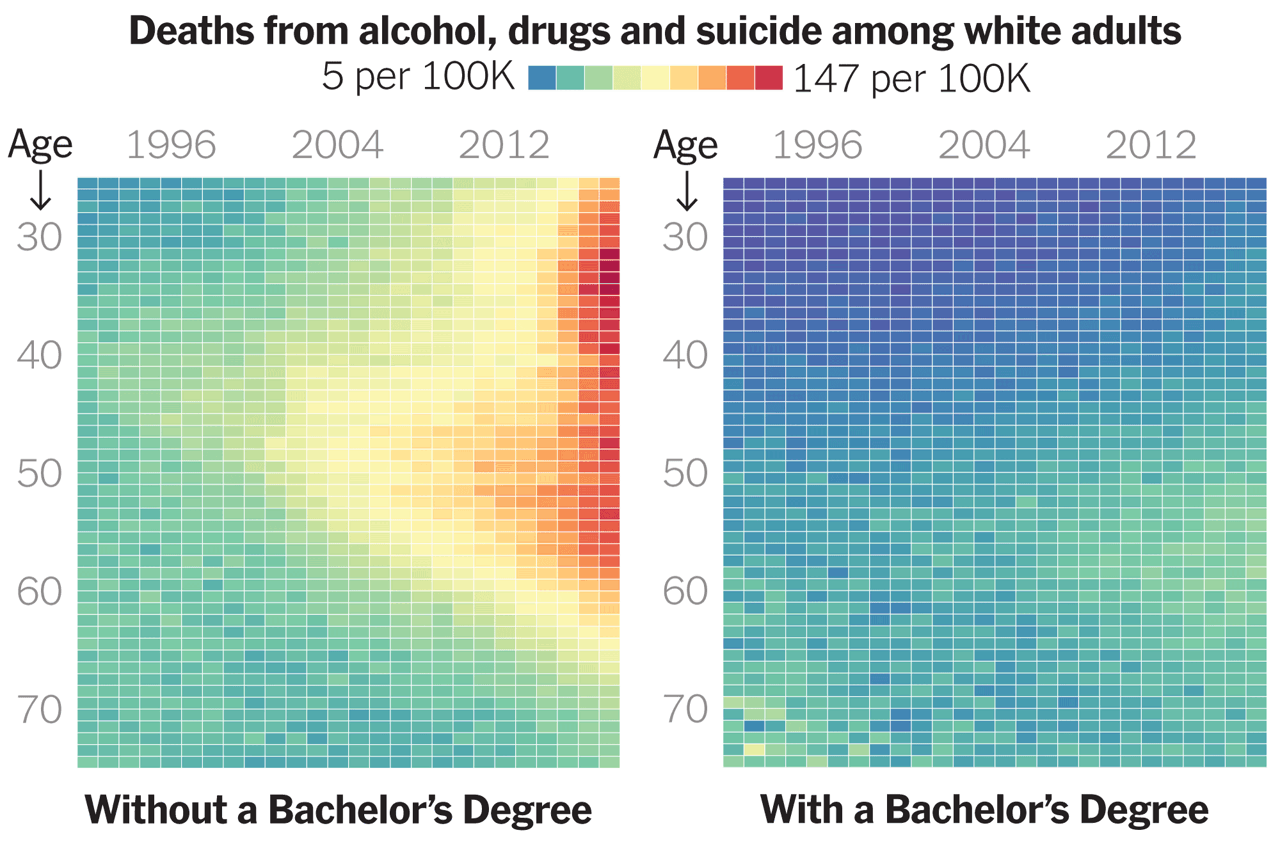 In the article they look at the marked difference in suicide rates amongst young white adults over time. They compare the rates of those with and without a degree and talk about “deaths of despair”. It is pretty grim reading, but from a data visualization point of view, it is amazingly powerful.

Some people might remember back to the “Computing for Good” project by Ripple in 2013 in conjunction with the “World Community Grid” project that was co-founded by IBM and allowed people to “donate” computing power for social good in return for XRP. It was one of the first ways for people to acquire XRP. The project has been doing work on helping combat Zika, AIDS and many other diseases. Alas, they have said they won't be getting involved with Corona, but there is a far more formidable force that has been involved... meet the IBM-built Summit Supercomputer at the US DoE: 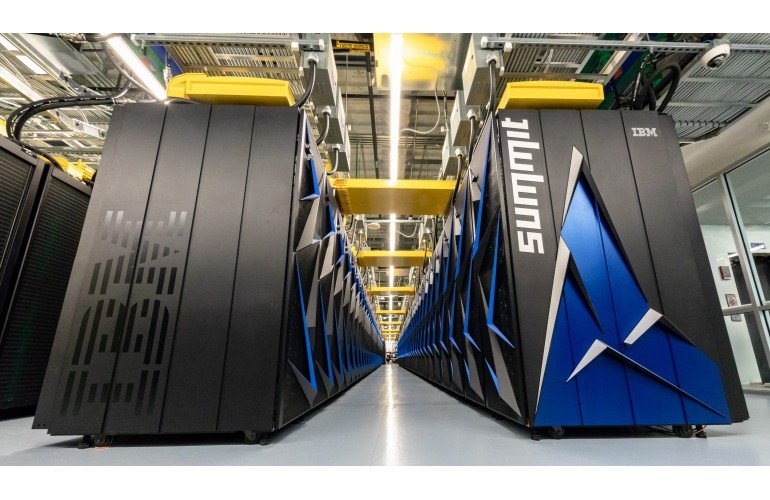 Summit was needed to rapidly get the simulation results we needed. It took us a day or two whereas it would have taken months on a normal computer,

[said Jeremy Smith, Governor’s Chair at the University of Tennessee, director of the UT/ORNL Center for Molecular Biophysics.

](https://newsroom.ibm.com/US-Dept-of-Energy-Brings-the-Worlds-Most-Powerful-Supercomputer-the-IBM-POWER9-based-Summit-Into-the-Fight-Against-COVID-19)**Tensorflow Quantum**
I've started to wrap my head around quantum computing this week. It is something that I have vaguely understood for a while, but I want to get much more knowledgable about. Hopefully soon I'll be involved in organising some workshops around quantum computing. Did you know that IBM have a bunch of actual real quantum computers you can use?! I'll go into more detail in a separate post, but there is the IBM Q Experience that lets you actually write and submit programs to run on them.

So this week, my mind was blown when I discovered Tensorflow Quantum a machine learning library that allows you to create hybird classical/quantum machine learning models. I can't even conceptualise what that looks like... so need to do more reading, but looking forward to having a play with it.

This week IBM announced plans to integrate Project Debater into Watson Group products like Watson NLP, Watson Knowledge Studio, and Watson Discovery later this year. This is the first commercialization of Project Debater since IBM Research introduced the AI capable of maintaining debate with human champions in June 2018.

This has given me the idea of a project to fetch auto-generated transcripts of YouTube videos and summarise them using Watson NLP. Stay tuned!

This week I have been working from home in an attempt to prevent spread of the Corona virus. Myself and my family have a few of the symptoms, but no idea if it is Corona or just random seasonal lurgy.

But this has brought into sharp focus for many people, the issues of working from home all of a sudden. I am lucky in that IBM are extremely well setup for working remotely. And previously I worked for three years for a completely geographically dispersed startup company. So I'm pretty used to it. But not everyone is, and the sudden requirement has thrown a lot of people into unfamiliar territory. One of the big issues has been space to actually work. I've seen people on Twitter creating ad-hoc desks in their hallways from laundry baskets.

Many people offering tips and advice for the physical and mental changes of working from home. I recently 'lost' my study at home as it needed to be converted back into a bedroom for daughter moving back home again. And so I wrote up about the standing desk / breakfast bar I recently hacked from some Ikea parts. Hopefully might be useful to others. 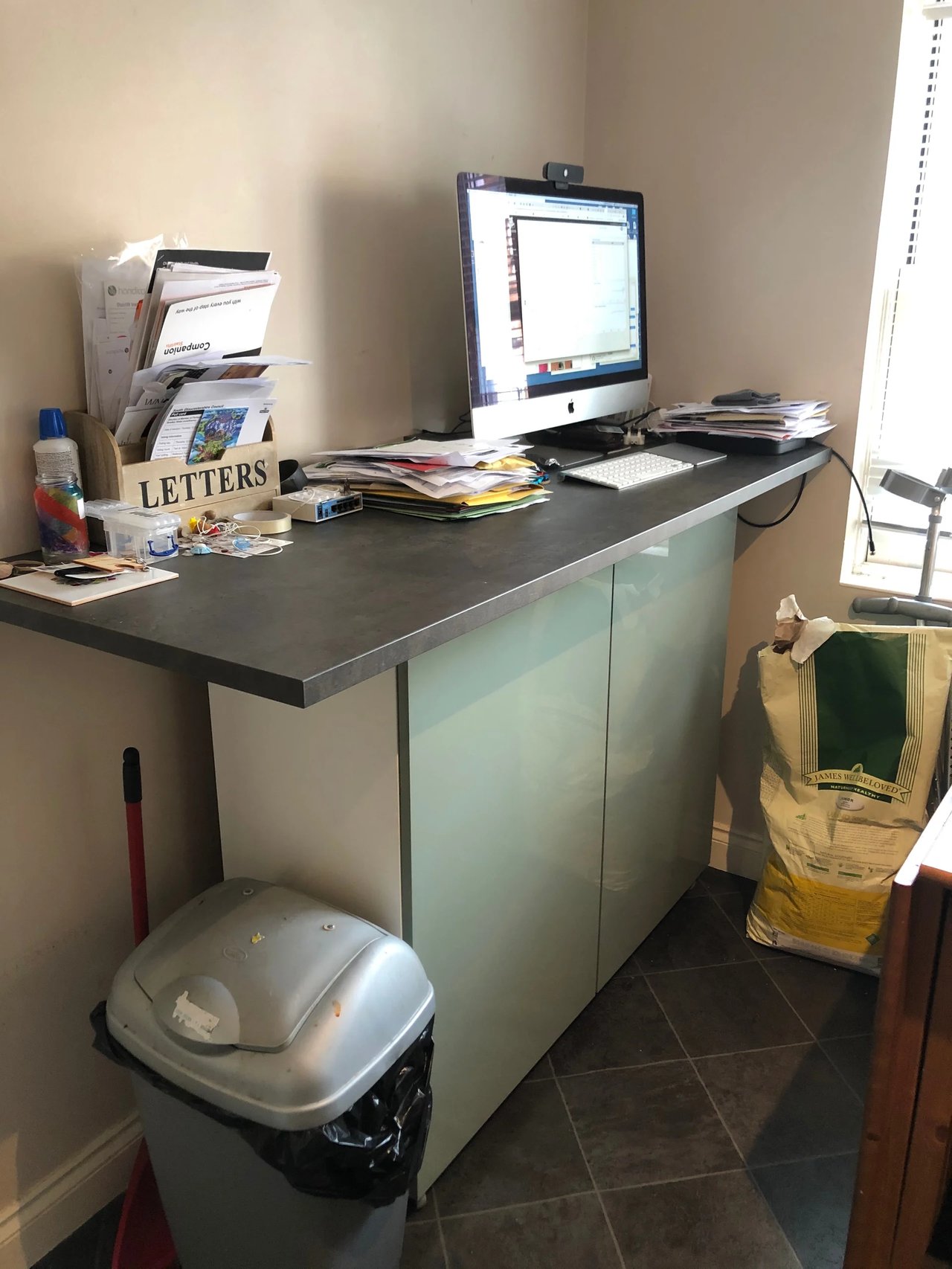 So with so many events being cancelled, my plan of trying to attend one local meetup per week has been hampered. However in a random bit of synchronicity an old friend of mine Calvin Hendryx-Parker, who organises the IndyPy meetup in Indiana, USA, had invited an IBM Developer Advocate to present there. And they were streaming it live online. The talk was on Bias In Machine Learning. The whole area of ethics and bias in machine learning is something not only interests me, but is a major area as a society we need to keep an eye on. Svetlana Levitan from IBM was presenting about AI Fairness 360, an Open Source toolkit developed by IBM to help you examine, report, and mitigate discrimination and bias in machine learning models.

The event started about midnight my local time, but was worth staying up to listen to live. There were a few issues with the sound being a bit choppy at times, but was very interesting to experience as a participant given that we are going to have to be moving most (if not all) our upcoming events to an online format.

Wow... I thought I had not been very productive this week... but this has been a much longer weeknote than I anticipated! I'm not sure I'll be able to keep this level of detail up, but it has certainly been motivational to look back at everything I've done/read/learned this week.