This blog weaves together the roots, strands, & shoots of our past and present lives as stewards and artists-in-residence on Hummingbird Hill, a one-acre Garry oak / kwetlal mosaic in Metchosin where we're working toward developing a care-oriented creative livelihood together, learning to support & restore our local habitat, and getting to know our other-than-human cohabitants better.

In a sense, what you see here is also an attempt to answer the ever-looming, anxiety-inducingly broad question: “What have you been up to?” and seeks to share a sense of how we've grown & found greater wellbeing through ecology, creativity, & reflection over the seasons. 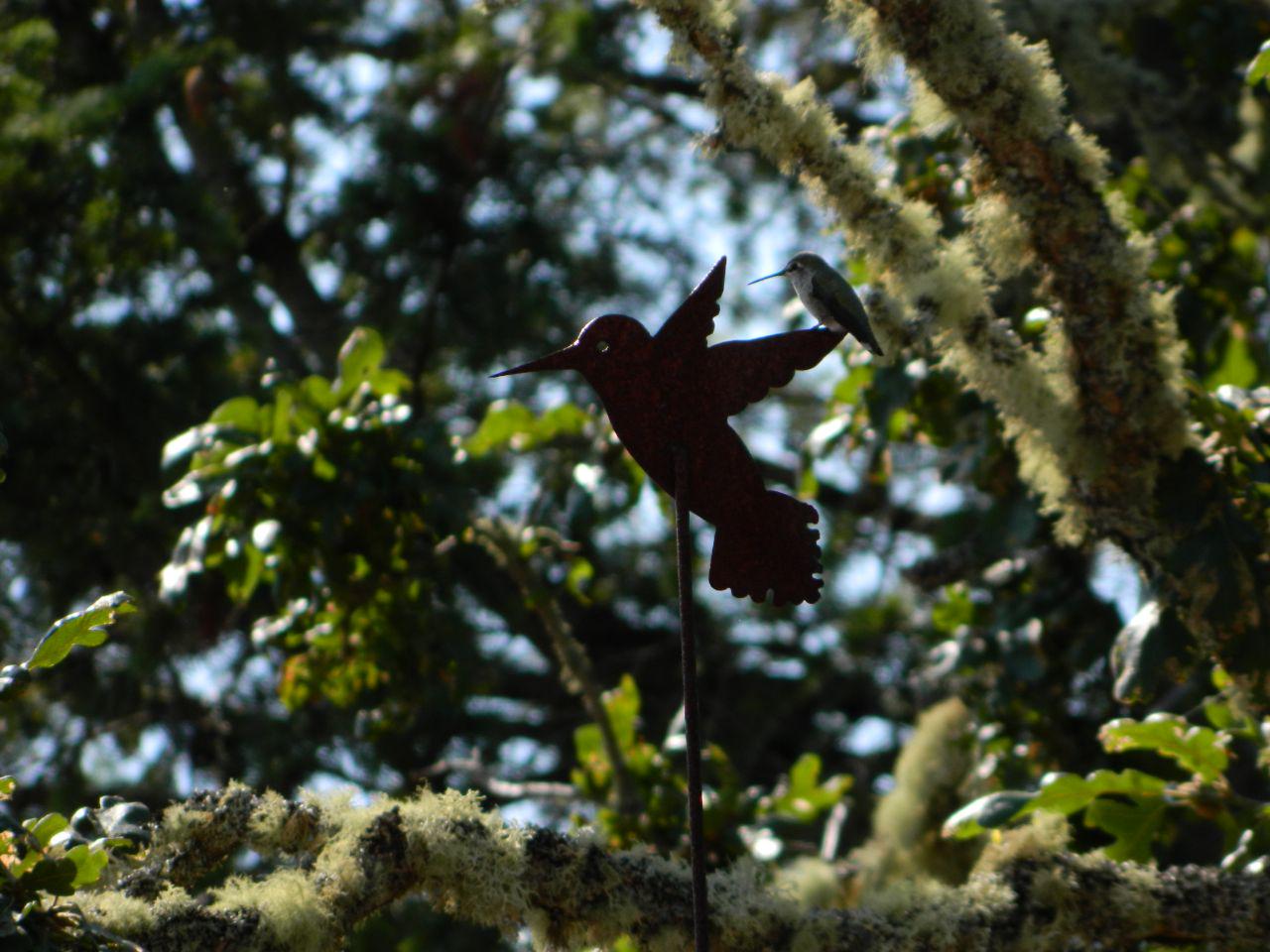 Yes. A hummer on a hummer! A female Anna's, that is, taken here at sx̣ʷət̕č̕əlíᙆéw̕txʷ.

Moreover, co-creating this blog is a way for us to collaborate more closely, share our research, develop our writing & web literacy skills, and cultivate a more robust connection between our offline & online lives. The contents are a combination of previously unshared things as well as bridged posts from other realms, such as the Scuttleverse

. Eventually, we plan to create a zine series about Humm Hill and our experiences here as well.

Meanwhile, you can explore our online sharings as a whole, or break the content up into an evolving list of categories:

We're learning to build this space with Write.as — a wonderful human-friendly platform which allows us to share updates on the web on our own terms away from the metrics and dark patterns that have come to dominate the web. We've been having a lot of fun learning to style our blog with CSS and to design a layout which combines our aesthetics. Unlike strictly linear blogs, posts here come and go cyclically as we revisit and replant them—sometimes with modifications and new growth. 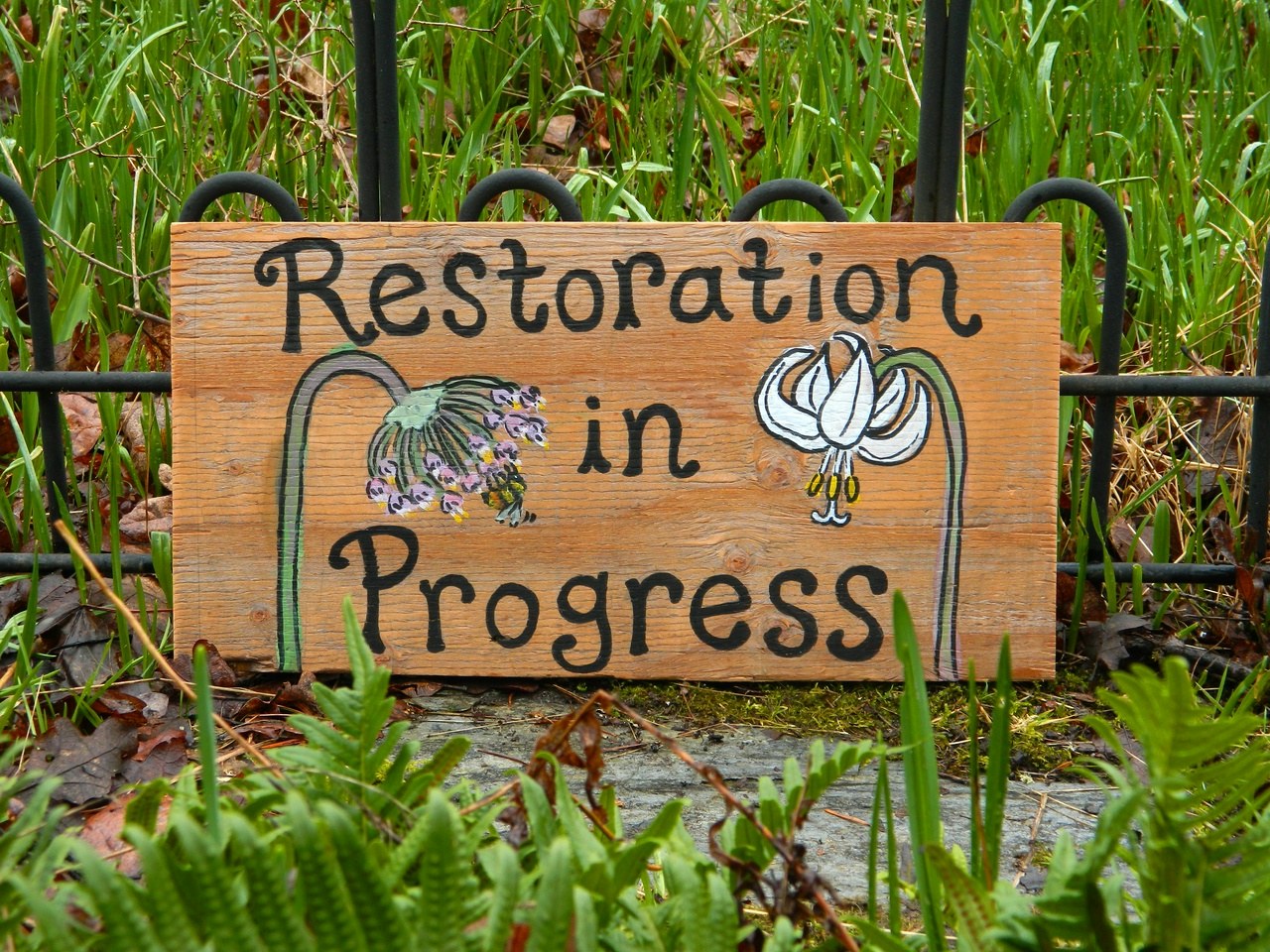 (Oh, and by the way, all of the images featured on this blog are by us, unless otherwise noted. If you'd like to use any of them for other purposes, please get in touch 📧.)

Read on to learn a bit more about us, our habitat, and that cute tiny hermit crab. 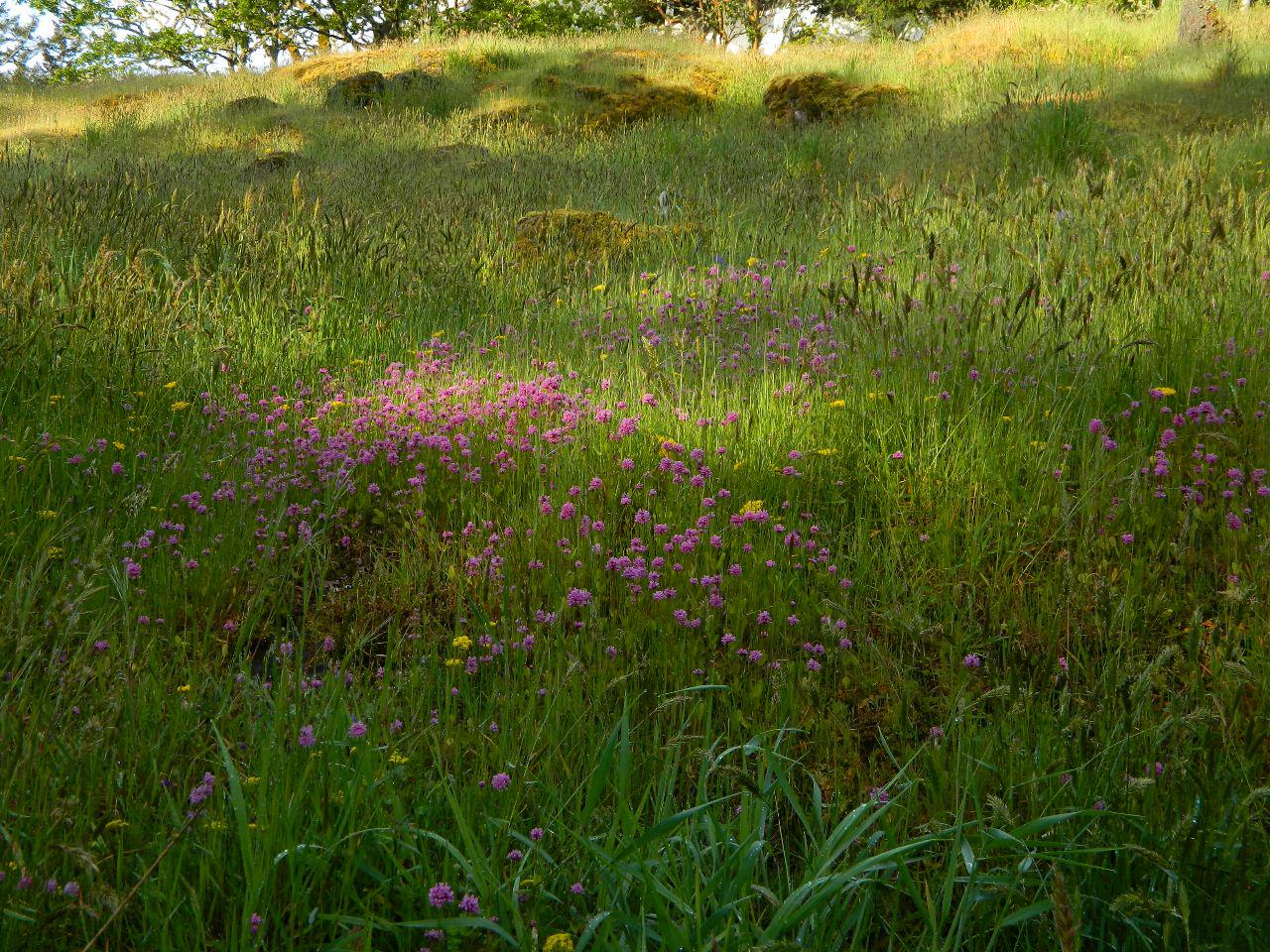 Not far from Camas Hill, Chickadee Hollow, Race Rocks, Wild ARC, and the Rocky Point Bird Observatory (where we both volunteer), Hummingbird Hill is a rock outcrop mosaic of endangered Garry oak habitat — co-dominated by arbutus, fir, maple, & pine, and intermingled with horticultural elements — hidden amidst a winding patchwork of forest remnants, farms, and lawns.

More broadly-speaking, Humm Hill is an acre of land located in the North Latoria Creek Watershed, at the southern tip of Wrangellia and the northern tip of the Crescent Terrane of Siletzia — also known as Metchosin; a town named after a Scia’new (pronounced 'chee-a-new') term for a dead whale rotting on a beach. The Scia’new arrived in 'S-met-sho-sun' thousands of years before a farming community was established in the mid-1800s.

Over a century later, Seán's grandfather moved here and informally established Hummingbird Hill as a nature sanctuary & sovereign land of hummingbirds, noting these tiny dinosaurs visiting in swarms “as thick as wasps” — one spring evening, tallying upwards of 20 Anna's & rufous hummers crowding around his feeders.

Alongside avian dinosaurs & humans, Humm Hill is also home to a wide variety of other flora & fauna which we will illuminate through this blog. (You can also follow along with our research as we broaden our our knowledge about local ecology.)

As Seán's grandfather once wrote:

While building a home upon Ice-Age-polished rock, I came to appreciate not only was I sharing habitat with deer, raccoons, snakes, lizards, numerous seasonal birds, countless insects and other unseen inhabitants – but that they were here long before I came with deed in hand. There is no paper documenting mother deer's right to survive and pass on to her fawns, grand-fawns, and great grand-fawns the territory she inherited from her grandmothers. 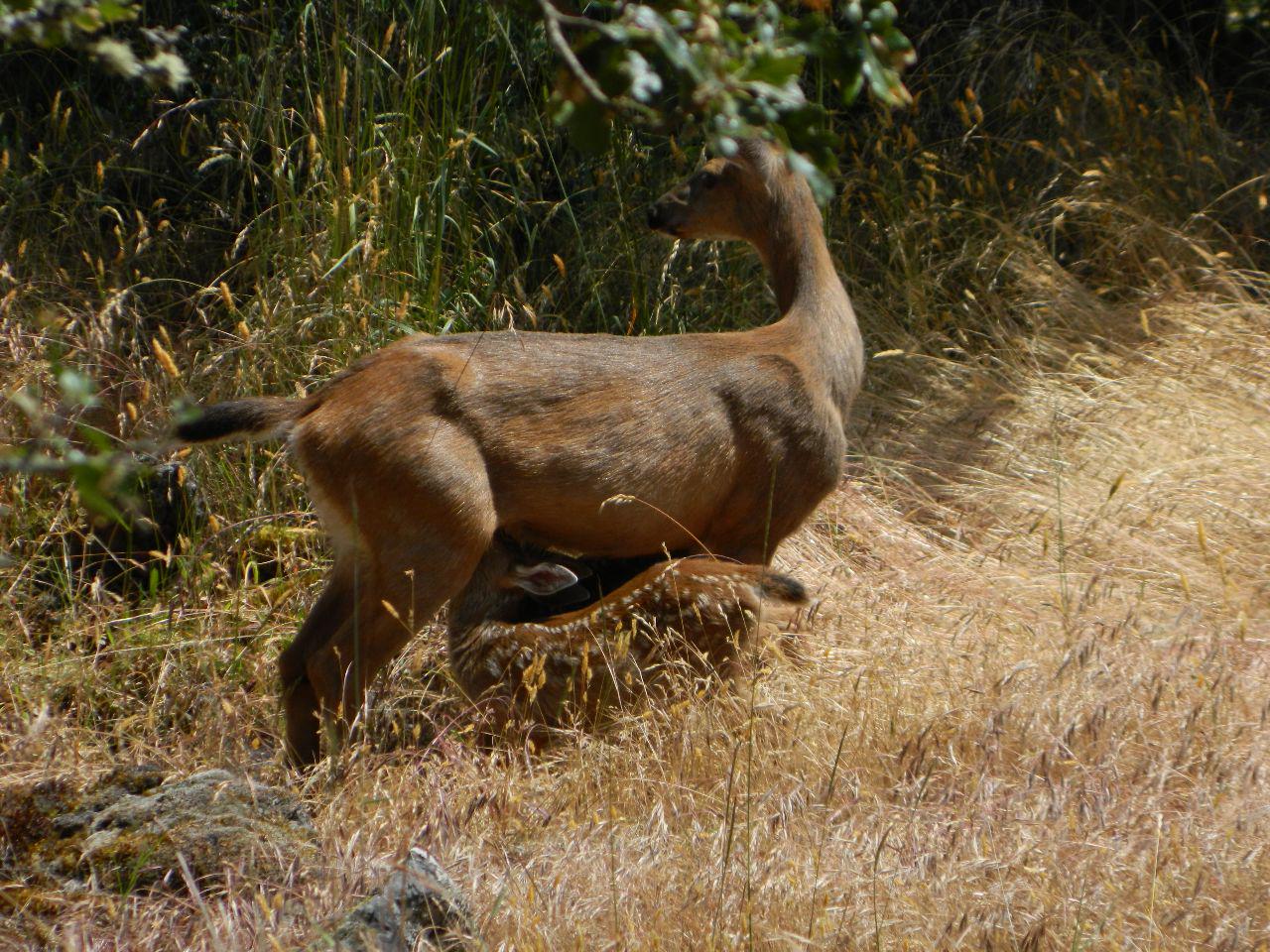 Mama doe nursing her youngling down the slope from where those words were written.

In the absence of stewardship over the years since he died, aggressive weeds have grown thick—crowding out biodiversity—while many long-nurtured plants have withered, prompting renewed conservation, restoration/rewilding, and gardening efforts. 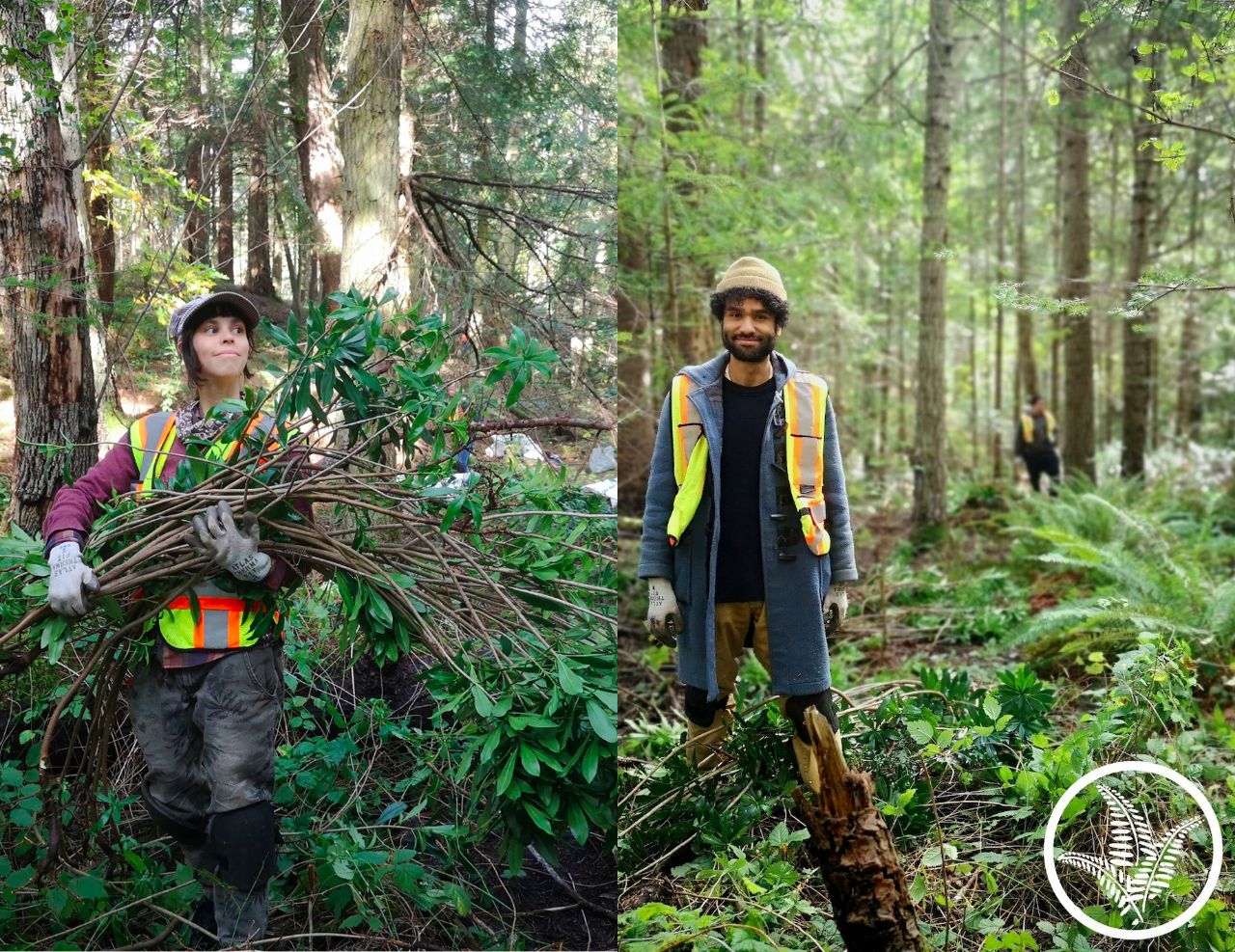 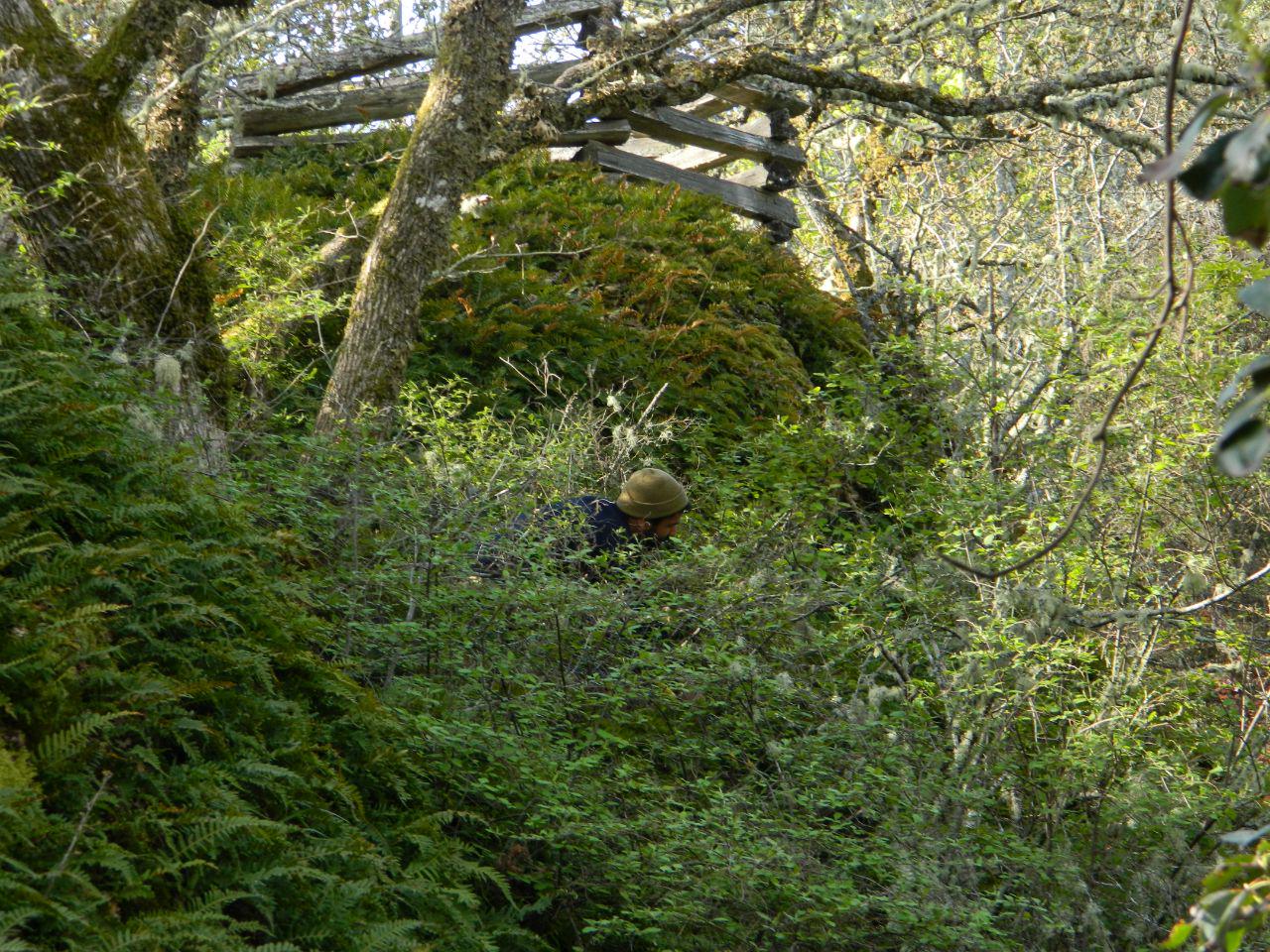 I first visited Hummingbird Hill in the fall of 01997, shortly after moving to Cascadia from the Sonoran Desert. Over the next 18 years, I grew extremely close to my grandfather, who stewarded Humm Hill for 30 years — after which he was torn away from his home due to Alzheimer's (a story for another time).

Five years later, after a long, agonizing family feud over whether to relinquish or carry on our family's stewardship of the Hill, I moved here to find a way to honor my grandfather's legacy — and to grow new roots through self-care & creativity after struggling with chronic illness, depression, anxiety, and grief for many years.

After being the caretaker here for a year, I met Kate at a nearby gathering of pizza-making & poetry-reading (hosted by our friend Byron) — where, although we barely spoke, I learned that she was a musician. Shortly later, I attended one of her concerts and was enthralled by her performance. After getting to know each other properly over tea-by-the-sea, artmaking, & sharing illness narratives, I happened to have a dream that she was playing her accordion here at Humm Hill and, well, one thing led to another and now she has become both my partner & co-caretaker here as well :^) 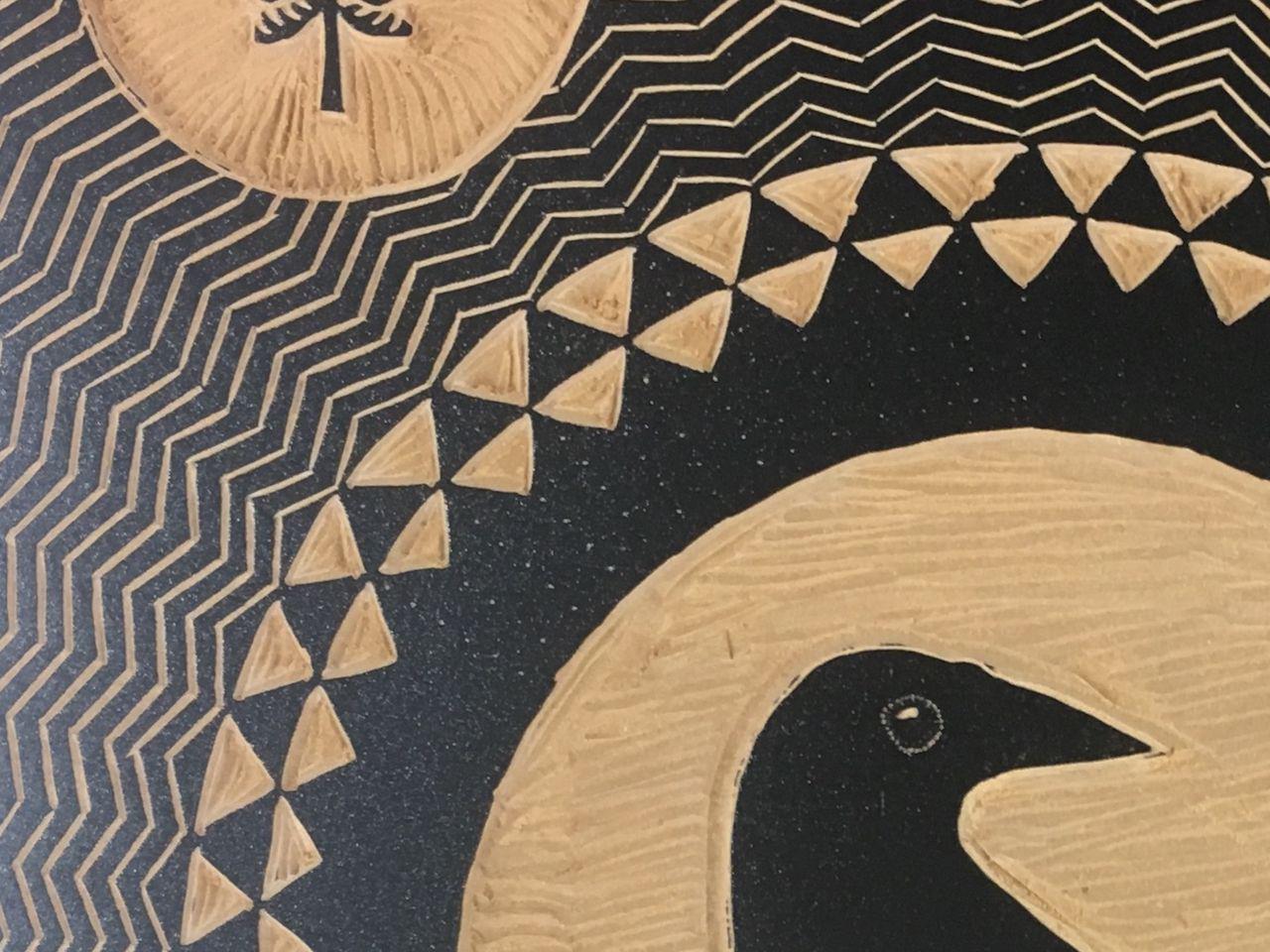 During my first two and a half years on the island, I was a full-time student at Camosun College, where I was able to learn traditional printmaking techniques from Brenda Petays and Hjalmer Wenstob. Now that I've graduated and received a work permit, I'm in the process of building a small home printmaking space so that I can explore this medium further. I've also recently begun to try my hand at watercolor painting & digital illustration, as well as a number of other art forms.

Prior to moving to Vancouver Island, I was living in the Seattle area, where I worked in the King County Library System for a number of years, and sold space travel supplies for The Greater Seattle Bureau of Fearless Ideas.

You can learn a bit more about me through my website. 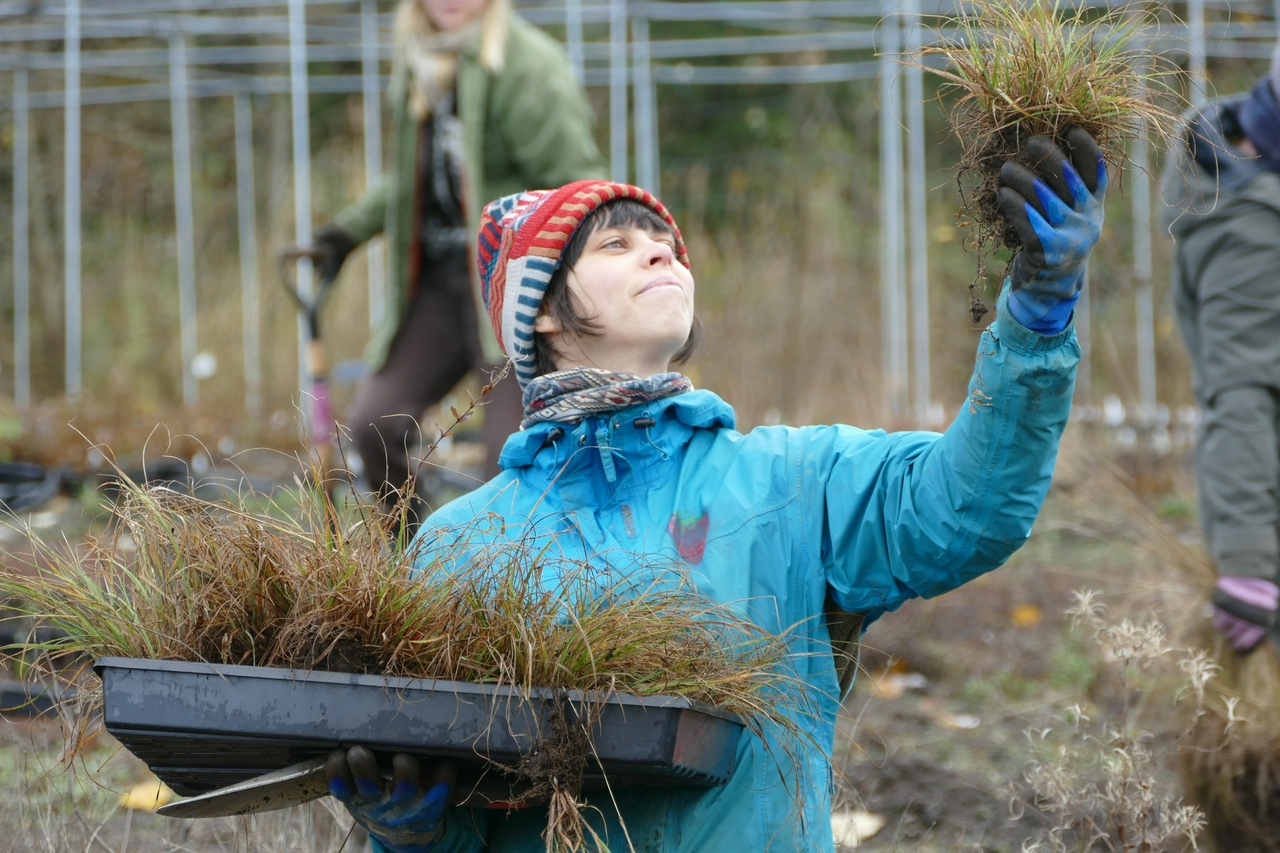 After several years of identifying as an extroverted-nomadic-bicycling-accordionist-busker, I became exhausted and in need of grounding. In early 2018, after a bit more couch-surfing and communal living, I met Seán at a gathering of bakers and artists. Many shared pots of tea, conversations, meanderings, and collaborative drawings later, I gratefully accepted the invitation to move to the awe-inspiring, bird-abundant natural habitat that is Hummingbird Hill; the transition to which resulted in a much-needed change of pace.

It has been a wonderful opportunity to reprioritize and focus more deeply on my art, music, relationships, and general wellness. I'm enjoying learning so much about how to care for and identify plants, birds, and myself. It's a good combination of healing and hard work :) 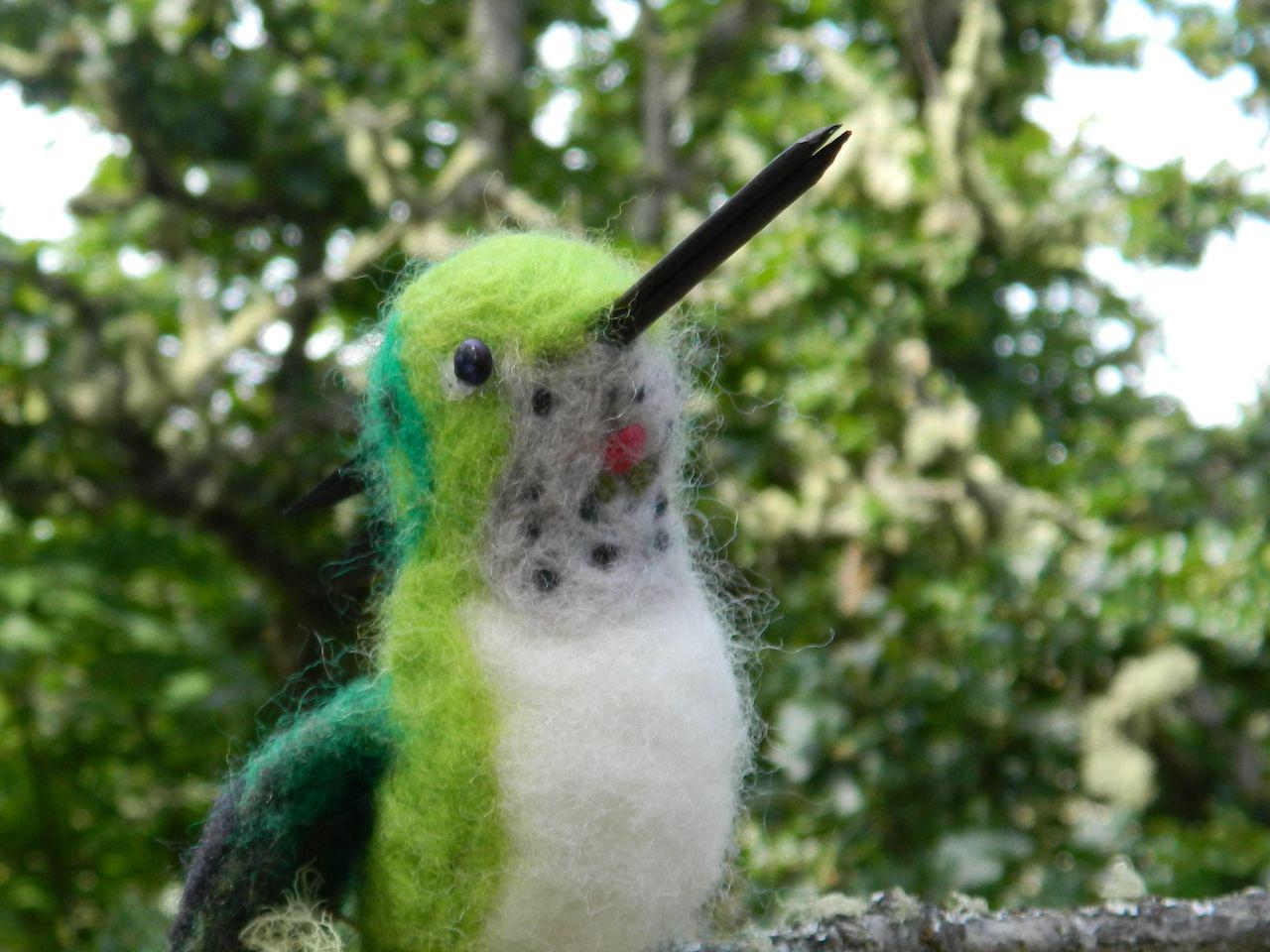 My first needle-felted puppet, humming amongst the Garry oaks.

To learn more about me and peruse my art & music, head over to my website.

<— This little crab's name is Hermies, and it's the official mascot of the Scuttleverse – the realm where the seeds for this blog were originally planted & nurtured. Hermies was brought to life by the incredible artist, zine-maker, & yoga / cyborg physical therapy instructor Angelica.

The Scuttleverse is generated by Scuttlebutt, a decentralized p2p platform which has enabled us to connect with lovely humans around the world who are dissatisfied with the types of experiences established by the dominant social networking sites.

To learn more, you can read Zach's wonderful modular essay about Scuttlebutt, Seán's rant post comparing Bookface to The Scuttleverse, or you can visit the official website to watch a love story unfold through the platform