This week marks the 36th anniversary of Hummingbird Hill, and soon we'll officially be back in Metchosin to reflect, reorient, and prepare for the future. We have exciting plans for the new year, and will be busily laying the groundwork for the next chapter of Hummingcrow & Co. through the winter. We'll have a bit more to share on that front in our next post, but before we take a break? from our exploration of 日本, we thought we'd share a field report from our digital studies of two species which have delighted us over the past several weeks. 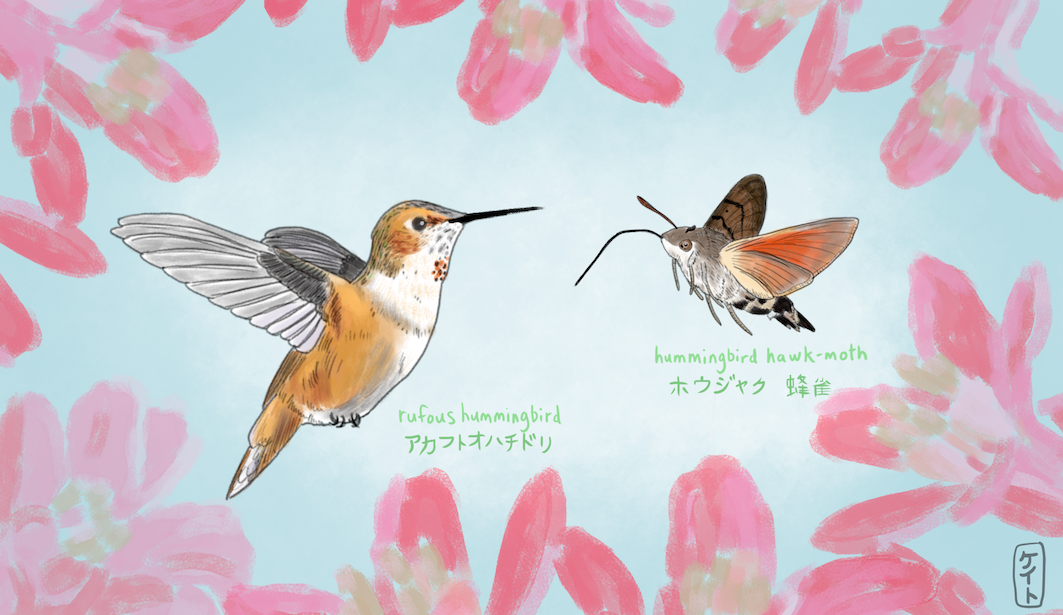 While researching different 鳥 (birds) in Japan, we wondered if there was anything similar to a ハチドリ (hummingbird) there. Well, we discovered that they don’t have hummingbirds, but they do have amazing hummingmoths, known as 蜂雀 (literally “bee sparrow”) or hummingbird hawk-moth in English. The two of them are a case of convergent evolution— unrelated species in different places evolving similar traits to adapt to similar conditions—sharing the same hovering method and sipping nectar from flowers, pollinating along the way.

I became slightly obsessed with this cute bird-like insect with the dangly legs and curly proboscis, enough to warrant making a piece of art comparing our similarly-coloured rufous hummingbirds with the hummingbird hawk-moth. It was great fun. 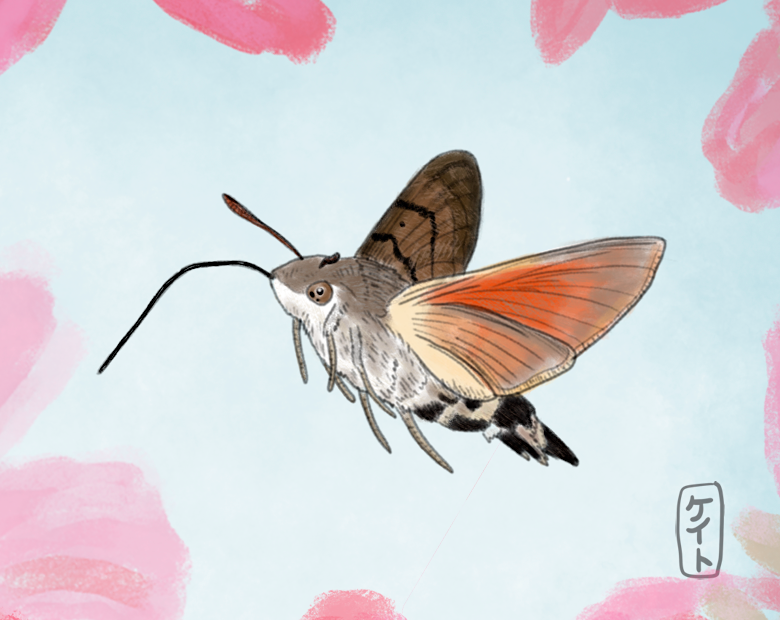 Through an email exchange with my friend みすず, I learned that she had seen one of these delightful creatures before, in Hayama, Japan. She was amazed at how it hovered around flowers “exactly like a hummingbird, quite unconcerned with humans nearby.” She was shocked to find that nobody around knew much about it, except for the fact that it wasn’t a hummingbird. Misuzu marvelled: “Why didn't I know about the existence of such an amazing species all my life?!  It seems many people don’t.” Whelp, that was all I needed to hear to fuel the fire building inside me to illustrate the sweet creature—and share it with you, to help spread the word of this magnificent moth! 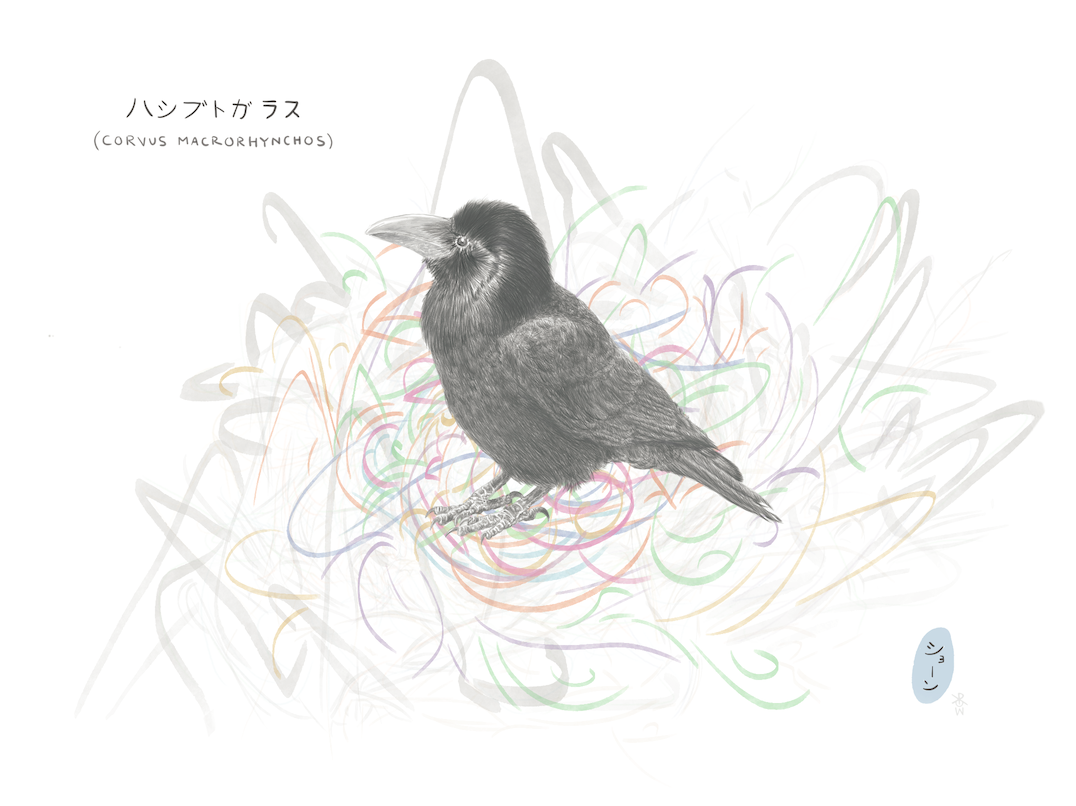 Truth be told, one of the things that I most looked forward to when traveling to Japan was having the chance to observe and learn about the karasu family. One species in particular—the ハシブトガラ / jungle crow (now known as the 'large-billed crow' outside of Japan)—was at the top of my list, mostly because I've heard its calls so many times in Japanese films and shows. As I came to learn, like many others crows, this species has quite the reputation!

Although historically admired in Japan in association with folk songs, stories, mystical goblins (烏天狗), guardian deities, and a divine three-legged / eight-spanned messenger (八咫烏; a figure which still appears in some modern Shintō contexts, as well as in football), today crows have become highly controversial—particularly in big cities—due in large part to the rising population of urban-dwelling jungle crows (or so it seems), and their knack for getting into trouble. And by “trouble”, I mean causing blackouts, snatching candles from shrines (& apparently starting field fires with them), and stockpiling soap from kindergarten handwashing stations—you know, the usual crow shenanigans. 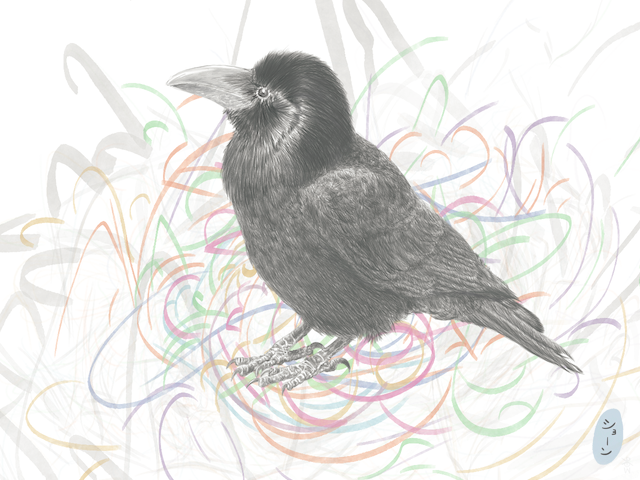 Jungle crows are more akin to ravens in appearance and, confusingly, ravens are often referred to as simply “crows” in Japan. That being said, ravens are far less common than crows (apparently only seen in Hokkaido).

The most common human-crow conflict surrounds these highly-adaptive omnivores' appetite for the piles of garbage which have grown more abundant as human populations in cities such as Tokyo and Kagoshima have become more dense. The mess that the crows leave, and their tendency to defend their meals aggressively, has led to a number of control measures such as 'crow patrols' which destroy nests (to which the crows have used countermeasures such as decoy nests), sound repellents, and yellow garbage bags.

In a sense, the urban environment has become a new forest for these birds, and they are merely cleaning up the waste that humans are leaving behind (or, more accurately, turning into trash islands). These words by Colin Tyner sum the broader implications of this perspective up nicely:

Forget about pigs, cows and horses. Crows are our companion species in an industrialized world. Before the transformation of Japanese society from an agrarian to an industrialized, urbanized archipelago, crows’ insides were probably filled with grains. Now? It is more likely they are filled with instant ramen and other processed foods.

Are we what the crows eat?

As for the blackouts, fires, and soap heists, a closer look reveals some fascinating adaptations which belie these crows' reputation as mere villainous troublemakers / pests:

Regardless of their bad rap, there are clearly still many people who love and revere these crows in Japan, and who seek to find a way to co-exist with them rather than stigmatize and exterminate them. On that note, tonight we will be watching Tokyo Waka (streaming here)—an intriguing documentary about this complex relationship between crows and humans in 日本.

A quick question from クイントンちゃん:

Well... yes and no. We've been having so much fun exploring and learning about Japan that we've decided to keep the bridge that we've established over the past several weeks open! (More about this in our next post.)