World Migratory Bird Day is upon us once again, as many of our feathered friends prepare to embark on their journeys across vast, treacherous autumnal flyways, connecting communities and ecosystems around the world (while we humans continue to manage our zugunruhe). In honour of this auspicious occasion, we thought we'd take some time to spotlight our incredible local bird observatory, where we've previously had the opportunity to participate in their migration monitoring and saw-whet owl migration programs. 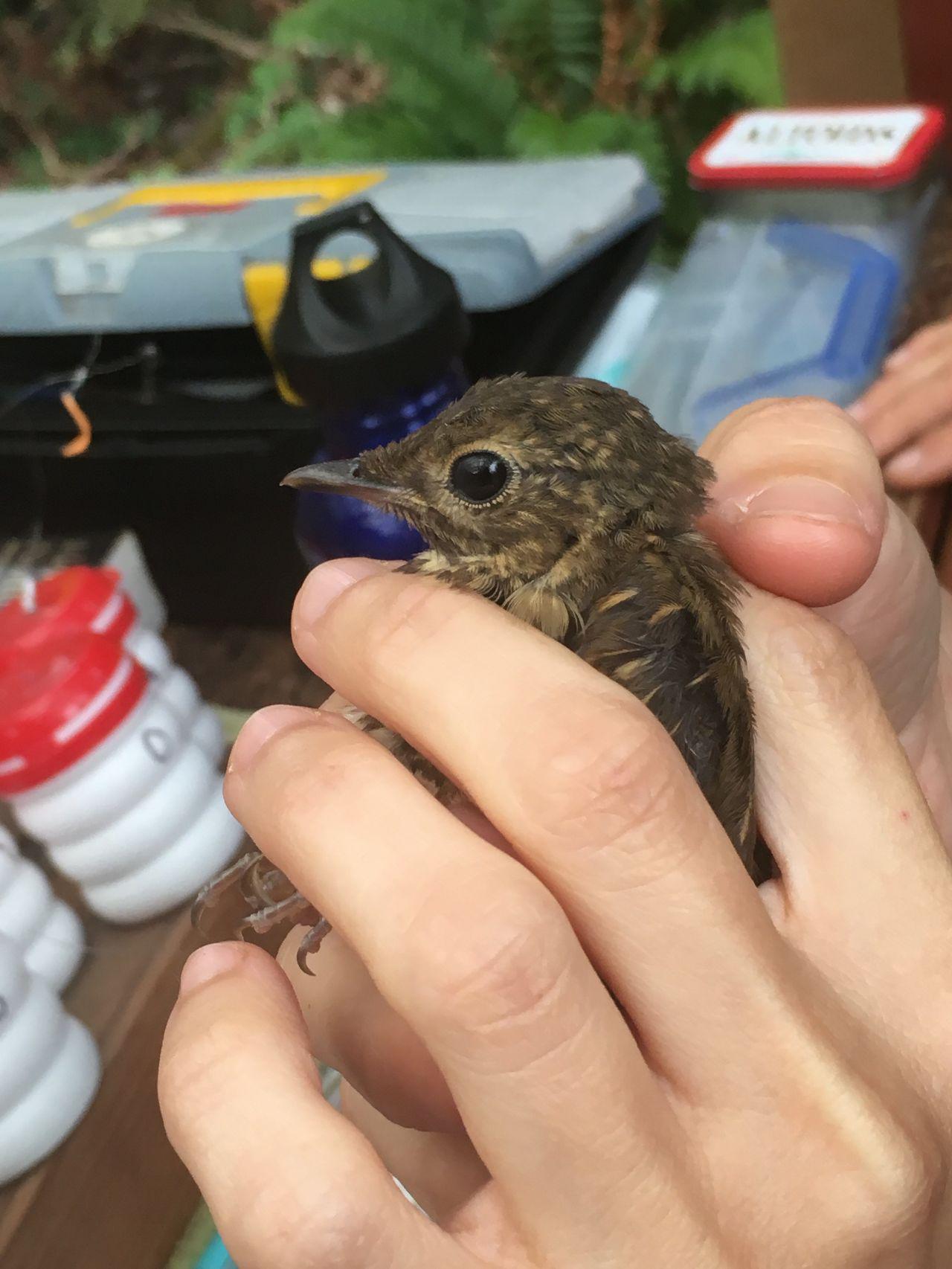 Founded in 1994, the Rocky Point Bird Observatory celebrated their 25th anniversary last year thanks in great part to the work of over 1,000 volunteers who have contributed thousands of hours a year to sustain their efforts. In addition to their scientific work, RPBO also offer hands-on education programs for kids, as well as bird walks, conservation guides, fascinating online presentations, and even a podcast! Their wonderful blog is a rich resource for learning about local bird activity, and their website is packed with a plethora of identification/conservation resources. Last month, they banded their 100,000th migratory bird—a “Puget Sound” White-crowned Sparrow—and last October, their 10,000th Saw-Whet owl.

Suffice it to say that the RPBO community is incredibly dedicated to supporting conservation research and raising awareness about local bird communities—and we were naturally eager to get involved with their work. 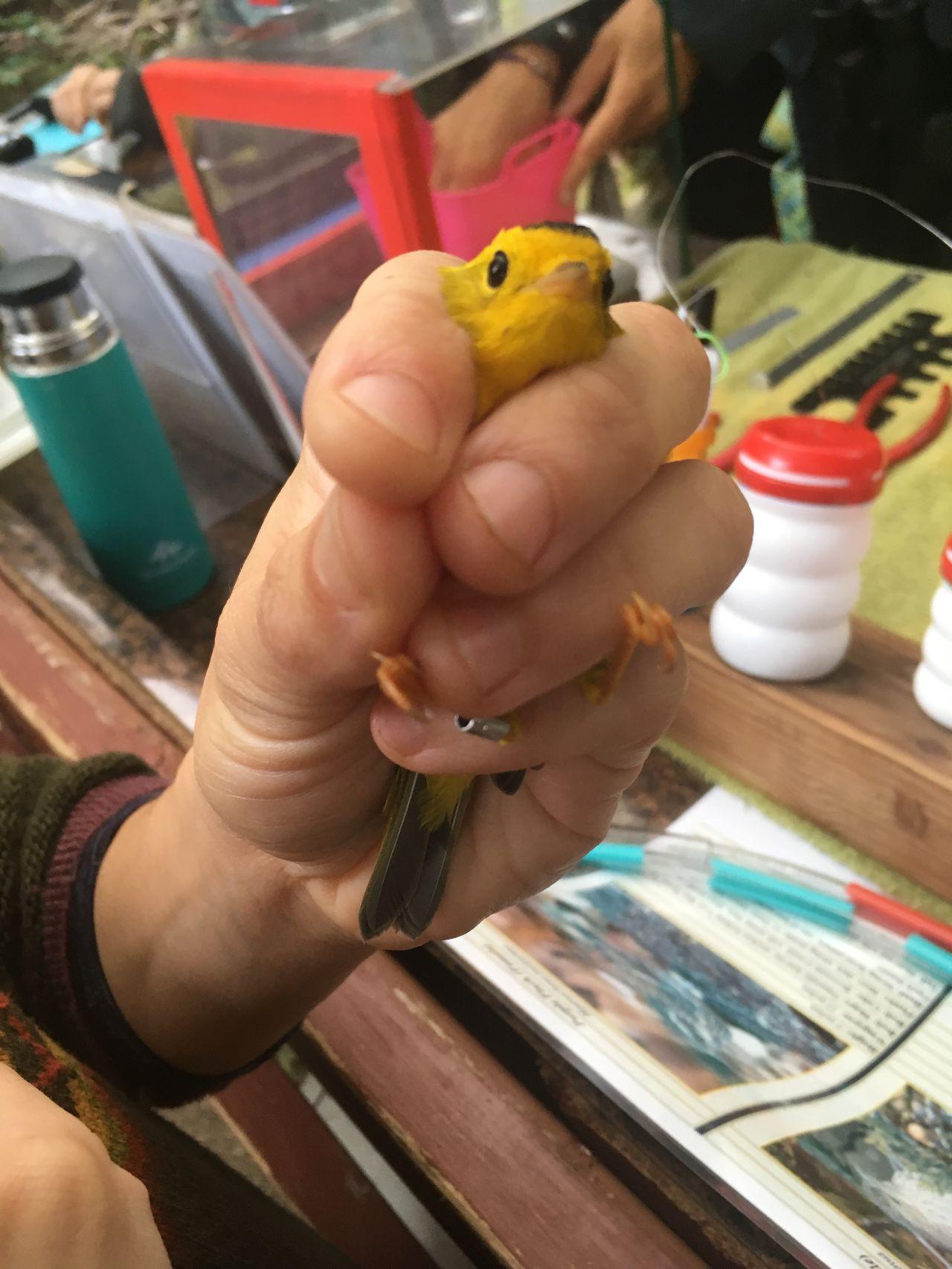 So, a little over a year ago, we pulled ourselves out of bed around 5 am, packed up some onigiri and tea, and headed over to RPBO's Pedder Bay station for our first volunteer shift together there. Seán had worked his first shift a couple of weeks prior and returned beaming & gloating excitedly about the experience, eager for us to be able to find two open slots together the next time.

Over the course of seven hours (and five miles of walking/hiking), we learned the ins & outs of how RPBO capture, examine, and band birds as safely & carefully as possible. The banders and veteran volunteers were not only highly knowledgeable, but also extremely kind and considerate toward us newcomers. The RPBO staff really make an effort to empower volunteers to learn new skills and to feel deeply valued. 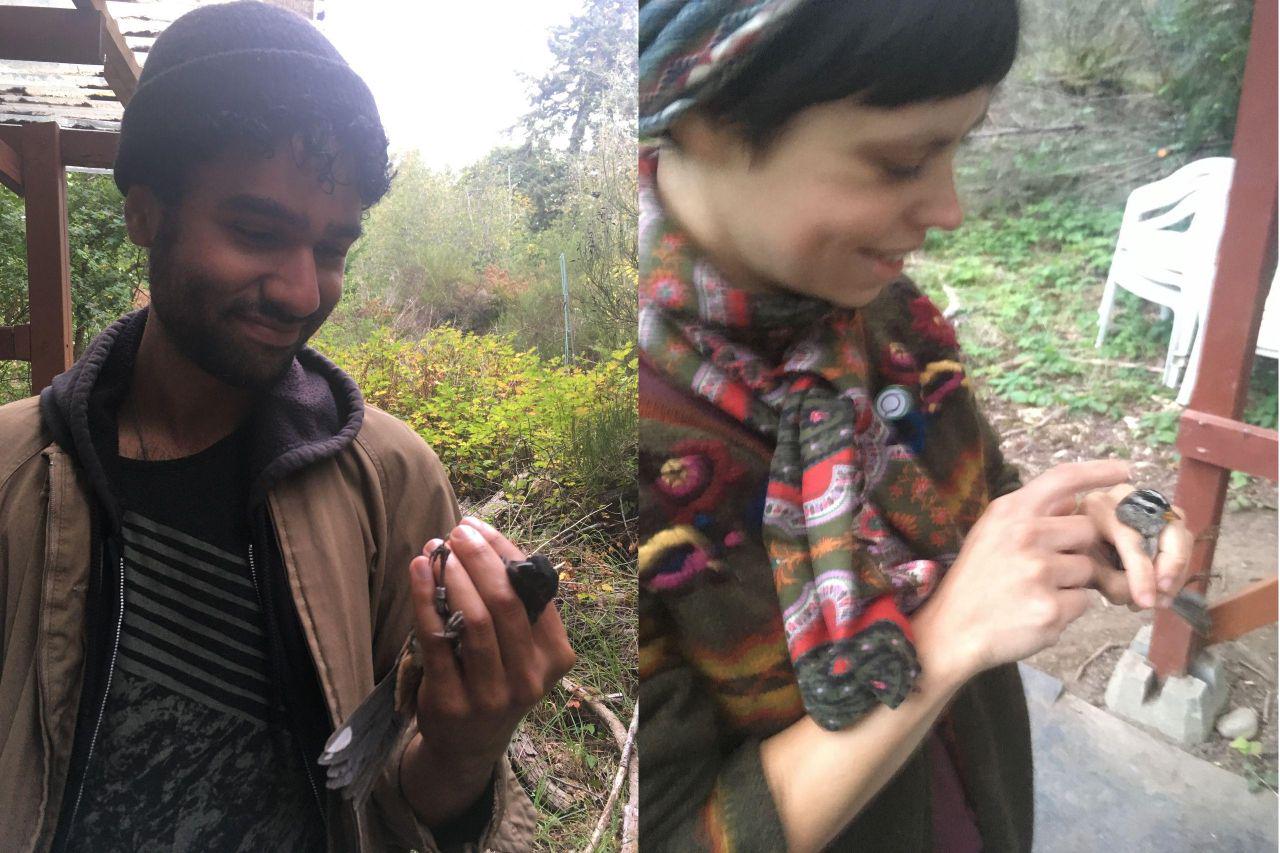 Seán The Giant practices his bander's grip with a patient spotted towhee, and a tired-looking Kate gives a white-crowned sparrow a little head-pet before it flies off

~ So what drew you to volunteer at RPBO?

~ Kate Warning: This question got me reminiscing deeply about my bird-infused early years...

I suppose it was only a matter of time, as I’ve been a bird-lover all my life. One could say I was raised with 6 siblings— my brother Kevin (who’s nick-name is that of a bird), and five cockatiels: Petey, Panny, Bubba, Boon and Pinky.

They would fly around the house; perch on your head while you were trying to have a serious phone conversation; twit-twoo, squawk and chatter away; attempt to mimic certain phrases they heard often (most ironically: my dad’s plea when the ear-shattering squawks would get out of control, “Be quiet! Be quiet, Bubba!”); and stretch their necks up and over the edge of the big popcorn bowl to steal a snack.

They eventually graduated from a large cage to free rein of the spare room, in which they proceeded to peel off the wallpaper, chew holes in the wall and occasionally find a way to escape out a window to a tree down the block.

We loved our birds— as well as our backyard birds, and the swans (who we greeted by name), geese, and gulls down at the waterside. Few things would get our family into a fit of laughter as readily as bird-antics did.

A baby chick was hatched in one of the classrooms in the elementary school across the street, and they had it live with us before transporting it to a farm. I was too small to remember, but apparently we would roam around the backyard, chick in tow, lifting up rocks for the chick to discover and eat up the various grubs hiding underneath.

I recall syringe-feeding some baby robins that we rescued in a tissue box, and being appalled by the amount of poop that would come out from their tiny up-turned rumps. Also, the word “rump” alone was enough to get my brother and I giggling uncontrollably. The bird-identification book was one of our most frequented reads, and we especially liked the “occasional escapes” section which showed budgies, parrots and our cockatiels.

In the house, I would spend chunks of time procrastinating on homework by obsessively attempting to count the number of bird decorations that adorned our kitchen alone— more than 100— including figurines, paintings, photos, and the beloved/despised bird-clock that would blurt out one of twelve digitally-garbled birdsongs at the top of each hour.

Since moving to Vancouver Island, my love of and fascination with birds has only grown. This year, the discovery of the eBird citizen science app has resulted in my blissful daily sessions of backyard bird-listening, glimpsing and watching, seeing how many birds I can list that morning. My bird-identification skills are getting better every day, the most satisfying for me being by ear, honing in on their songs and calls to find out who’s nearby. I would love to become good enough at identification to eventually be able to volunteer at RPBO for their census shift. 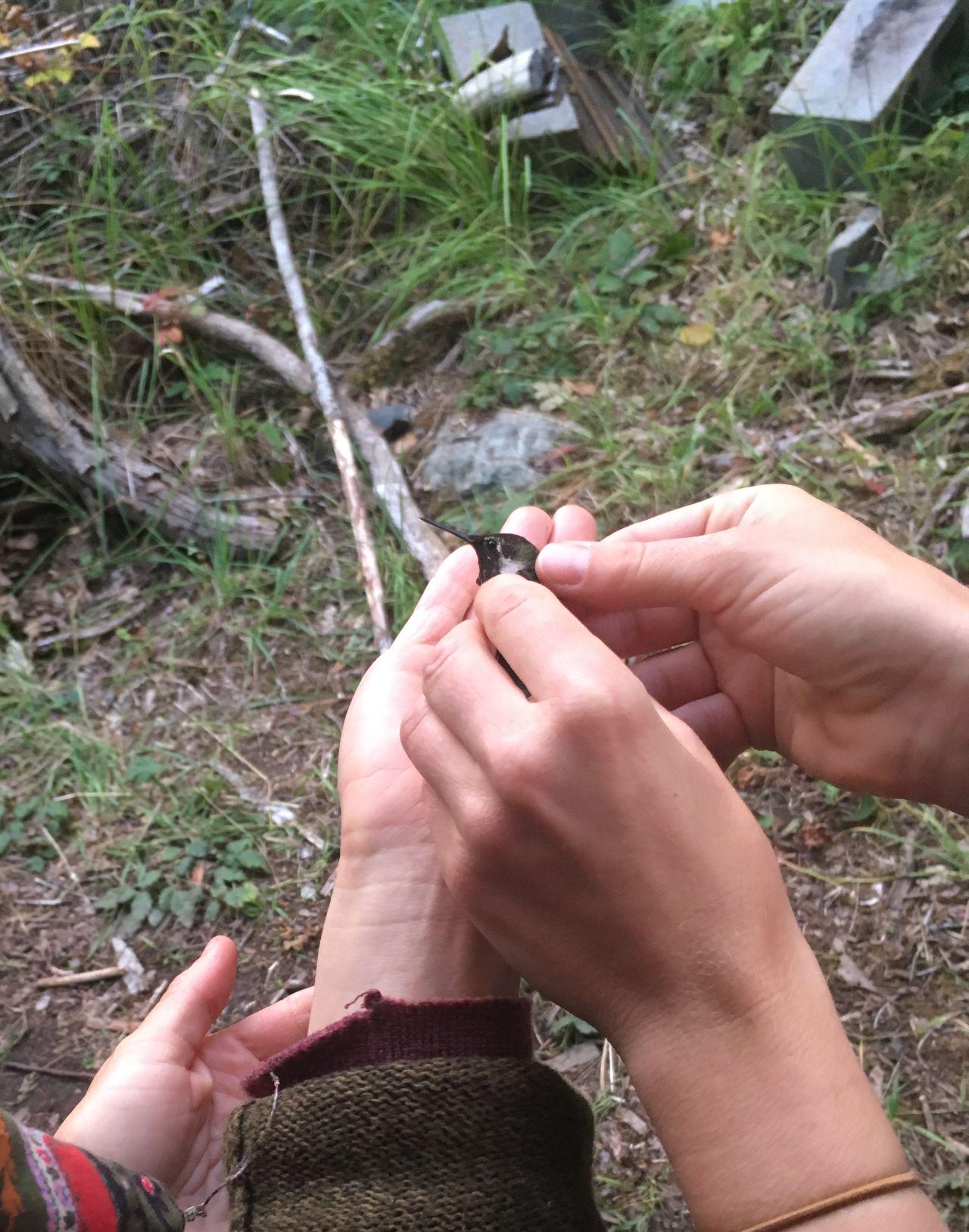 An Anna's Hummingbird getting ready to fly off from Kate's palm after going through the quick process of being swaddled in a tiny blanket in order to become adorned by the tiniest piece of jewelry: a custom-made leg-band.

And away he goes!

~ Is catching birds and banding them harmful? I sure wouldn't like it...

As a longtime bird lover, I was excited to have an opportunity to learn more about our local birds up close and personal, and to support conservation research in the process. However, I was also concerned about the ethics of capturing and banding birds — worrying about the stress which the birds must experience when being netted & bagged, and wondering whether the bands could have harmful effects.

In addition to having my worries alleviated by RPBO's commitment to bird health/safety, what truly changed my feelings was witnessing, firsthand, the high level of care and expertise which the RPBO team consistently demonstrate when handling birds—as well as their hard work in raising awareness about conservation.

Furthermore, as I've learned about the countless hazards and stresses that our species has introduced into the environment—which kill billions of birds every year—I've come to conclude that the positive outcomes of efforts to spotlight our avian neighbours far outweigh the types of concerns that I initially had. Beyond their fieldwork, RPBO spend an amazing amount of time and energy working hard to raise awareness about human (and pet) impacts on bird populations, and to foster lifelong connections with birds and their habitats starting with the kids who often make field trips to their Pedder Bay banding station, where they can see birds up close and learn to hold them safely.

It's really amazing and inspiring to see how a love for birds can bring together people of all ages, and from all walks of life, to pay closer attention to the natural world. 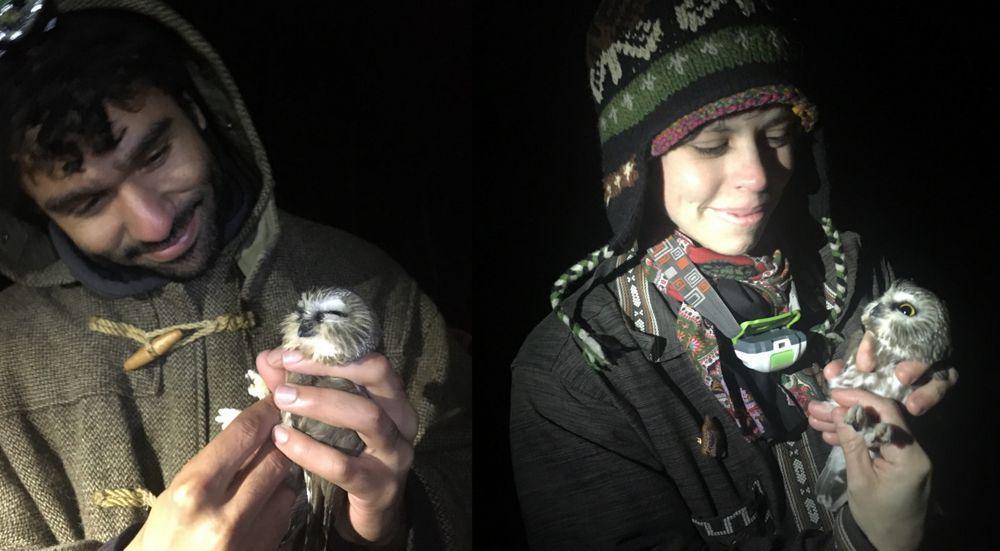