Part 3 of my new Minecraft storytelling campaign, in which I go on my first “rough ride” camping trip to secure exotic goods and open trade relations

So before anything else, a programming note: I'm switching over to an entirely new universe with the next entry! That's because Minecraft is upgrading to version 1.17 on June 9th, and there's going to be a bunch of cool new stuff to explore with it, but I basically have to start a brand-new game in a newly upgraded 1.17 paradigm to enjoy the full benefits of the new 1.17 right away (uh, or at least kinda, but more on that at the end of today's entry). I'm going to keep these first three journal updates online, and just continue on in a 1.17 universe with the same name and same goals, same first steps of finding a good place, mapping it out, and figuring out my travels out into the wild world to gather resources; just that the overall map will change starting with the next journal entry I put up here, so things will look a bit different than the previous screenshots of this project.

As I talked about last time, as a middle-aged man, one of the most pleasurable ways for me to interact with Minecraft is actually to get really high on a Saturday night, pack up a few pieces of minimalist survival gear, and head out into the great unknown of each Minecraft 10-billion-freaking-square procedurally generated universe or however big game is. Big enough that you will never run out of space to explore, if you truly want to. I was raised in St. Charles, Missouri in the 1970s, and in childhood given a steady diet of derring-do stories about the adventures of Lewis & Clark, who actually started all their famous journeys into the unknown Louisiana Territory from my hometown (in fact, almost exactly two miles from the driveway of the house where I grew up); and so in my tween years I developed a great admiration and longing for that kind of experience that Lewis & Clark were able to have, out in a wooden canoe and heading down a river barely any human has seen before, mapping the territory, taking samples back home, and developing formal relations with whatever villages you come across that already exist out there. I like my home base, don't get me wrong, with my fancy automated redstone farm fields and my ostentatious mansions; but what I truly like is getting away from real life altogether for a good three hours on a weekend night, pleasantly buzzed and completely immersed in this surprisingly complex universe, trekking my way across an unknown and often hostile land with only my bedroll, a little food, the makings of a bonfire, my horse and my sword. And a big empty pouch, so I can take all these exotic items back home, farm them, and sell them to my network of villagers to make my riches.

For my first voyage out, I decided to visit the four villages closest to me, which all border a Mediterrean-like sea that I have unimaginatively called “Middle Sea.” Sailing and hiking to all four villages constitutes one Saturday evening for me, maybe having a couple of beers along the way, letting Spotify recommend some, I don't know, Saturday Night Middle Aged Dad Playing Minecraft Chill EDM, whatever you want to call it, I don't know. The goal is two-fold: gather up large amounts of resources like leather as I traverse through those plains in the east; and establish trade relations with the four villages that exist along the sea's edges.

Back in version 1.14, Minecraft did a major overhaul of the village system, so that there's now a sophisticated system of experience levels that villagers can earn in any of 15 different professions, all of which rely on you trading raw resources with them for emeralds, or sometimes piles of emeralds back to them for a major item like an enchanted weapon. They “level up” through consistent trades from a novice to an eventual master; and once any of these 15 professionals reach master level, they start giving you enchanted stuff left and right, including potion bottles just literally full of XP glowy balls. That then legitimizes the idea of taking the time to learn and master the use of the electricity-conducting redstone in the Minecraft universe, to build automated farm fields that you can turn on and off with a switch that will gather the produce, herd it into a funnel, and deposit it into a storage chest for you. That lets you take giant armloads of produce and other resources over to nearby villages, start trading for massive amounts of emeralds, and level up those villagers from “novice” to their next stage of experience, “apprentice,” then eventually into “journeyman,” “expert” and finally “master.” (Conversely, I can convert some of my automated fields into full-fledged food processing factories too, by funneling that chest automatically into a smelter for the extra XP; then funneling that into a composter for automatic conversion into “magic fertilizer” bonemeal; then funneling that yet again into a final chest where I can pick it up at my leisure. But more on that in a future update.)

The other cool thing that came with v1.14 was a newfound dedication to differentiating villages across the universe and thus making them more interesting. Note how each village will most often have the same core things that all villages need to thrive — above, for example, a town alarm bell that can be rung to remind everyone to go to sleep to protect against the monsters, or warn everyone that a pillager attack is underway — but then changes its look and surroundings based on the biome, matching the material of the buildings and fences with whatever local material is most abundant in that particular area, and even going to the trouble of changing architectural styles too. This makes me feel more engaged with the roleplaying aspect of it, here on my stoned Saturday nights when I'm just trying to listen to some EDM and have a little fun here at the end of the pandemic, like I really am trekking across this dangerous universe and meeting up with a whole interesting cross-section of humanity along the way, bringing them goods from afar in exchange for jewels and a happy friendship, a day and night of rest at their village along undoubtedly with some trading, some drinking, some smoking, some gambling, &cetera. Hey, it's this or another stoned Saturday night of Netflix, so maybe cut me some slack?!

Of course, as I mentioned last time, I also engage in a bit of what I call “house rules,” which as old Monopoly fans know is basically a nice term for “gentle cheating;” one of my house rules, for example, is that I pretend teleportation exists in my universe, giving me an excuse to use the /tp “cheat” command but still remain committed to roleplaying, which I don't feel that bad about; because after all, Minecraft has already officially embraced the idea that magic legitimately exists in their universe (through everything from brewing stands and potions to endermen and Nether portals), so why not pretend that this same magic has been funneled into a teleportation system? I've made my own rules — I have to build a “teleportation platform” anywhere I want to TP, made up of polished white stone and an active block of powerful redstone in the middle, and that's then the only place I can TP, between one of these platforms and another platform somewhere across the universe where I plant them. I also have to visit the place for the first time through the “manual labor” of walking or canoeing or riding a horse there, before I allow myself to build a platform so that I can teleport back and forth (which is just good sense anyway, because if you don't know the Y-level or height of the ground of where you're going to teleport, you can accidentally teleport yourself straight into a mountain and almost instantly die, which I've done numerous times in the past). Now I can come back to any of these four villages instantly in the future; and now instead of 15 villagers with whom I'm trading different things, I have 60, justifying the automated farming equipment that's pumping out such a tremendous amount of resources back at my ranch.

Like I mentioned before, the thing that unites these four villages and my ranch is that we're all situated along the edge of the Middle Sea, which really helps scratch my roleplaying itch even more. Sailing through this sea and all its procedurally generated wonder, while baked and listening to Dadchill on Spotify, really makes me feel like Lewis and freaking Clark, man, out in my canoe and making my way from one place in the wilderness to the next. As far as our five settlements are concerned, we're the center of the universe, so the areas we get to know around us we refer to by our own compass standards — the Northmen, the Western Bedu. But of course each of these settlements thinks they're the center of the universe too, so I'm sure when I reach the destination of my next rough-rider trip, the Caribbean-like warm ocean biome locally known as Paraiso, I'm sure I'll be known by them as the “Coldwater Southerner” or some such sobriquet. I think of these things sometimes as I spend a cool overnight canoeing my way through the shipwreck-strewn rocky gauntlet in the center of the Middle Sea, on my way finally back home. 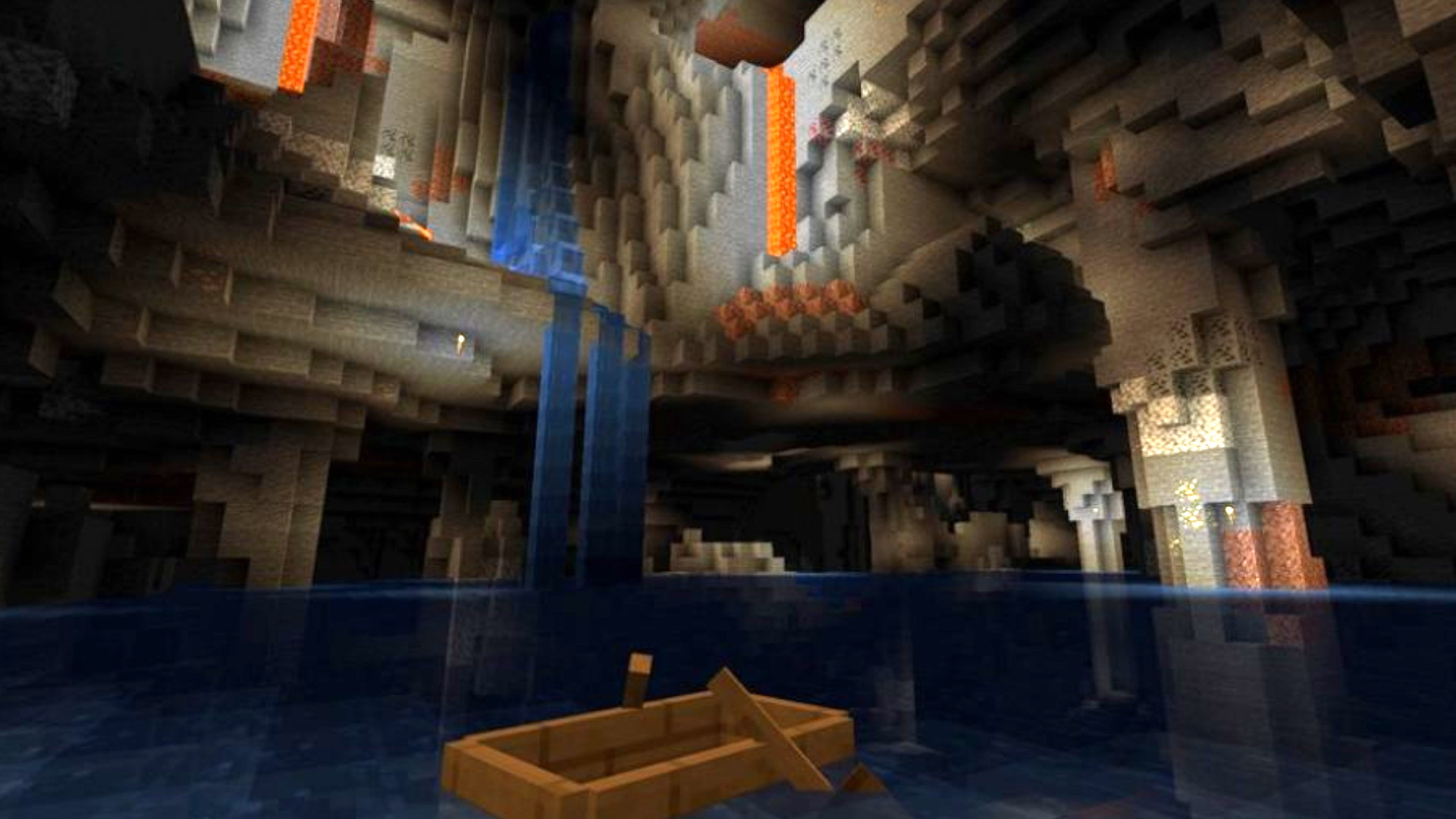 Of course, like I mentioned, the entire Middle Sea is disappearing on June 9th, as I switch over to the newest version of Minecraft so that I too can start experiencing all the brand-new elements such as geodes, lush caves, underground lakes and long-awaited decorative candles in place of torches. Yes, I know, technically I can upgrade my existing games into 1.17 ones pretty easily, which used to not be the case; but as far as I understand it (which admittedly may be wrong), even if you do so, you still have to travel to the next chunk over for the 1.17 features to kick in for the first time, essentially forcing you to start your base all over from scratch again. So if you already had a lot invested in a universe, and were at a point where you had defeated the Ender Dragon and had all this loot and magical stuff, it would make sense to just pack up and go a couple of biomes over and begin again; but I just started Enderman Ranch, and have hardly built anything up at this point, so it just makes more sense for me to abandon it altogether and start another Enderman Ranch in a 1.17 reality. That'll give me lots of new stuff to explore and incorporate into my career/lifestyle right from day #1. So I won't be going backwards in this series at this point, but rather just duplicating the steps I've already detailed in this literary series, only offscreen and away from my journal, until I pick up again next time with the new estate land picked and my first structures built (32 rows of automated farmland, and an apiary greenhouse where I can clone flowers using the bonemeal my food factory is producing).

So for now, I and the merry murmuring children of the far-west Zebra Station arctic research facility bid you a fond adieu, and encourage you to engage more with whatever harmless diversions have been keeping you sane through this long pandemic. Onwards and upwards!