In which freelance duties force me to yet again start a brand-new Minecraft roleplaying adventure, this one a more laid-back campaign reflecting my real-life situation as an overworked middle-ager relaxing on the weekends

Surprise! I've already abandoned my previous Minecraft campaign after only one update! That's because it was a story-heavy one, reliant a lot on building, but then suddenly things took a big uptick with my freelance book editing services over the last six months. I'm grateful for it, and will talk about what all this new work means in a little more detail at the end of today's update, but the drawback is that I'm now down to playing Minecraft only one evening per week, on Saturday nights when I also get high and play downbeat electronic dance music from Spotify (#dadcore) and just chill the fuck out for like eight straight hours, my one and only moment every week right now that I get a chance to do that. So I decided on an impulse to start a new Minecraft campaign altogether, and to make a much simpler story this time, basically reflecting my real-life situation — I'm now playing a citizen of this virtual world, who lives in a big city and does a sometimes draining white-collar day job, but then on Saturdays gets to drive out to his weekend getaway in the middle of nowhere, where he purposely engages in “primitive technology” roleplay, bringing nothing to the wilderness with him but rather building everything he needs from the wood, stone, ore, clay and water all around him. There's my space you're seeing out there in the middle of the water, that island from which I'll branch out to all the other shores around me. 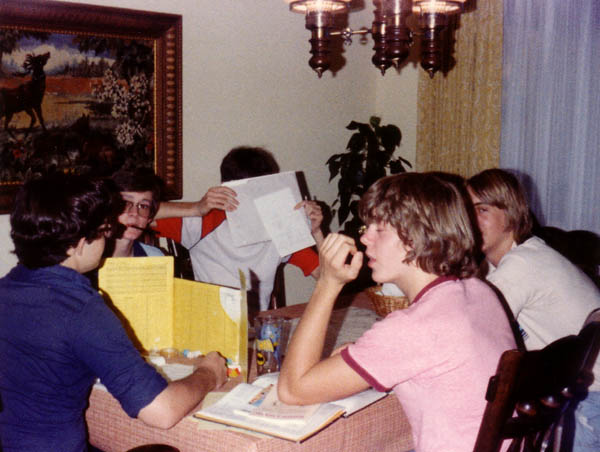 It makes me laugh whenever I think of it, because I think of how that's not a new development in the gaming world at all; how back in the late 1970s and early '80s when all my friends and I started playing Dungeons & Dragons for the first time, in our own childish campaigns in the neighborhood we were constantly playing experience point creep (i.e. outright lying about “other games” in “a neighborhood from someone at school” in which we would rack up insane amount of experience points, leading to all of us eventually being at Level Zillion and able to shoot lightning bolts from our fingers and other nonsense). But whenever we'd play D&D with the only other people who played it back then, middle-aged engineering nerds who we would all meet through our dads, who in suburban St. Louis in the '70s all worked for places like Monsanto and McDonnell Douglas and Ralston Purina (in fact, it was my friend John Platt's dad who introduced all of us fifth-graders to D&D in 1977 to begin with), I was always amazed at how gleeful these aging geeks were at being assigned brand-new beginner unseen characters at the beginning of that night's game, and considered it a huge success if they happened to make it to level 3 or maybe 4 before finally dying a fiery death just around 9:50 or so, just in time to take a leak before the D&D Mac User Group event was officially over for the night. So it's universal, I guess; no matter what the time period, kids always love going for the fame and glory in games, while the dads enjoy sitting back and figuring out what makes the game actually work.

As you saw in the overview picture above, I'm taking advantage here of a brand-new thing in Minecraft v1.18, which are brand-new biomes that either shoot up twice as high as mountains used to go, or plunge down twice as low as ocean ravines used to go. In my area of the deep ravines, for example, that makes for fascinating underwater diving, including brand-new structures along the deep bottom of the ocean, roving gangs of the new glow squids, Lovecraftian glowing magma blocks along the bottom of the ocean floor, but also now a plethora of Lovecraftian watery zombie monsters known as “the Drowned,” complete with deadly tridents. The corresponding aboveground jagged peaks have a new surprise as well, which is that Mojang has engineered the new ultra-high mountains to contain a giant crapload of coal and iron, which means you can begin mines now at the beginning of a game way up in the peaks so that you can quickly smelt as often as you want and build valuable iron tools, armor and machine parts.

Another big new thing that's come with v1.18 is that the clever little coders at Microsoft, new owners of Mojang, the company that makes Minecraft, have dramatically tweaked the algorithms that procedurally generate the various “biomes” that mark the various territories of a random Minecraft world, as well as making the placement of special features like villages and temples much more organic and interesting. The effect is seen all over the place, but perhaps none more dramatically than the now proliferation of mysterious “ruined portals” that now have an incredibly sophisticated look to them (it's just mindblowing to me that these are created essentially through math formulas), and now showing up in sometimes highly dramatic spots within highly dramatic surroundings, literally taking your breath away sometimes when you're trudging along at ground-level POV and suddenly turn a corner and spy one. This also harkens back to Minecraft's very beginnings, and how the game's original creator never wanted there to be an official guidebook or rules; he wanted you to figure out how to play merely by accidentally stumbling across fascinating-looking stuff while wandering around, and letting your sense of curiosity nudge you into figuring out what's going on. That's lovely to see Microsoft as the new owners still honor this spirit, within such dramatic details as these half-built portals into the Nether that now dot the landscape.

And of course there's all kinds of other structures to come across in my neck of the woods as well; here, for example, I found a pillager outpost right on the waterfront, which let me paddle up really close to it in my canoe for some photos before the marauding mercenaries finally noticed me and started going all batshit, trying to murder me as quickly as their powerful crossbows would let them. One day, pillagers, your banner will fly proudly on my estate...along with your heads!

I'm not sharing a lot of shots of my property yet, because it's currently a work in progress, more a collection of practical items right now and less a unified design. But as you can see, I did at least need to figure out a way to bring over animals from the nearby pasture, as well as get my horse on and off the island, so for now a big giant stone path in the middle of the sky will do; and I did come up with a cool little new design for a partly submerged enchantment table, brewing stand and anvil, with a low glass ceiling flush with the main floor of my workshop above it. And there's actually been another deceptively big change in the latest version of Minecraft as well, which is that monsters can no longer spawn in light levels 1 through 6 (out of a total number of 15 light levels), but can only appear way down in the light level of 0, after numerous complaints from new players about how they had no idea about this rule, thinking they'd be safe in their new cabin by putting up a single torch for the entire place. Since the fairly new candles can actually be placed in groups of anywhere from one to four individual ones on a block, each with a light level of 3, that means you can now place two of them in an underground mushroom farm to achieve a light level of no more than 6 (4 by the time it actually reaches the mushroom), which is low enough to encourage mushroom growth but used to be so low that monsters could suddenly appear in your mushroom farm out of nowhere, turning every visit to your basement into a mini-horror movie.

There will more of all that soon, including that half-constructed building you're seeing in this farewell image, being built on top of my island's one and only hill, a grand apiary and greenhouse I'm calling the “Crystal Palace.” But for now, I think I will bid adieu from “Xanadu,” to be visited again another happy stoned Saturday night soon.

So as mentioned, big changes are afoot around here, professionally speaking. Freelance book editing continues to go fantastically, so much so that I was actually able to raise my rates on January 1st by 20 percent and still have so many offers that I occasionally have to turn people down, just for lack of time. That has me thinking seriously for the first time about venturing out into the bigger unknown and truly hanging my shingle out to the world, doing a more targeted direct marketing campaign through a standalone website dedicated just to my freelancing, which is then actually advertised to places where self-publishing authors hang out. I've actually been paying for a stupid unbuilt Wordpress space for three years now, but just the sheer complexity of what's in store for me there keeps putting me off from actually beginning work. So as a stopgap measure, I recently bought a Pro account here at the great blogging platform Write.as, which I've grown to be a big fan of precisely for its minimalist, noncommercial spirit, which will now let me not only build out ten separate blogs but also apply my own CSS and Javascript to each, which will finally let me do much more sophisticated designs than this sorta blah default one that comes with all the lower tiers of membership.

So that's coming this spring, a dedicated website just to show off my freelancing services and let people directly book me for an assignment through it; and I'm also starting a complementary newsletter, where I sort of build a community of writers and publishers around me by showcasing my clients' newest books, sharing editing tips, relinking to the funny and weird ESL questions I answer over at Reddit, and share leads with other publishing professionals about great unsigned manuscripts I've recently come across. I hope that will sort of elevate me into legitimate “industry” status even without having a big name behind me as an editor, by basically creating my own ad-hoc literary community around me based around my clients, friends, ESL students, fans of my Goodreads reviews, people who have bought rare books from me, and more. But then like any good direct marketing campaign, I need something of legitimate value to give out for free to entice people to join the mailing list; so I'm actually in the process of writing a book of “tough love” advice to self-publishing and indie-press authors, basically all the lessons I had to learn by failing as an indie-press owner myself, which I'm calling (I kid you not) No One Gives a F—– About Your Novel, which I figure will certainly establish my “personal brand” as an editor with no ambiguity. That's all coming here soon, along with a brand-new look to this main personal journal of mine, so I hope you'll have a chance this spring and summer to keep coming back here regularly for the latest.