Linux and Why It Isn't My Main OS

I've tried multiple times to run Linux as my main OS at home, but there's always something that drags me back to Windows. I won't go into the past times I've tried, but I'll explain a couple of the reasons the most recent attempt failed.

Hardware
I stream on Twitch twice a week, and as such I have a couple of pieces of hardware to help me with that, namely the StreamDeck and GoXLR. Someone has created open source software to interface with the StreamDeck, but it doesn't offer the same functionality. As for the GoXLR, it does 'work' in Linux in that it will output audio, but none of the sliders or other pieces of the hardware will work, so unfortunately it's a non-starter.

Software
My favorite photo editing software, DxO Photolab, does not work under Linux. I could attempt to get it running with Wine, but I really don't want to trust my work to something that could possibly break. I'm aware of the alternatives and have tried them, but they just don't click with me for whatever reason. As mentioned in the hardware section, some of the software and drivers necessary for my streaming hardware don't function, which renders the devices useless.

Then, of course, there's games. Proton has done a lot for Linux when it comes to games, and it is quite impressive, but there are some games that just don't work optimally with it and caused me to reboot into Windows a lot.

Wrapping Up
I really do enjoy Linux. I continue to use it daily at work (via WSL2 and Hyper-V. Work took our Linux machines away :( ) and at home I use it through WSL2. I really wish I could break the Windows habit, but there are just some things I can't really give up. I have thought about purchasing a Mac Mini for everything not gaming / streaming, but right now I'm waiting for an Apple Silicon chip that supports more than 16GB of RAM. We'll see what the future holds there.

My first attempts at programming date back to the time spent in front of my Commodore VIC-20 and then C64, keying in BASIC programs from magazines and watching them run. From there, more BASIC and LOGO as I went through school (Apple II, Tandy 1000s) and by the time I hit high school, I opted to go to vo-tech for programming (they called it Data Processing). The vo-tech program was focused on business applications on mainframes, specifically an IBM System/36 and COBOL with a side of RPG, which leads me into getting my Associate's in Computer Programming from a local technical college, which sadly no longer exists. I'm thankful for it, though, because I was able to get a full scholarship, and six months after graduation, I started my career as a COBOL programmer in the fall of 1997. From that point on, I dabbled in a few languages and never really mastered any one in particular. C, Perl, Python, BASIC just to name a few. I'm pretty okay with Python these days as I've written some internal tools and applications with it, but sadly like anything else if I don't use it, I forget a lot of it.

Now in 2021, I want to try to get serious about learning a language or two and actually using it on a regular basis. I suspect being able to use it regularly means a good fit would be looking at an open source project and contributing to it. Python is on that list because I do use it at work, and I'm also looking at Go. I thought about C or Rust, but I can't really think of anything low-level I'd want to write. I think my main focus for now will end up being Python, then I'll start looking at Go later on. I probably will dabble in C since I do mess around with Arduinos and such from time to time, but we shall see.

Some other places around the web where you might find me.

Moving In with Write.as

I bit the bullet. I played around with a self-hosted instance of WriteFreely, but honestly that's not what I want. I'm keeping the VPS around for other things, but the blog is back here on write.as. So, why the 'Moving In' title?

Now that I've settled on a setup, I need to take some time and move posts over from my old blog to here. Sadly there's no import function, so it's going to take a bit of time. The bright side, though, is that I can weed out some posts that don't have much value to them, and/or clean up other posts as I move them. Eventually I'll point the old domain to the new one (eightbit.website) and retire any mention of endperform.

Where did endperform come from, anyway?
Glad you asked. I started my career in 1997 as a COBOL programmer, and one of the keywords was END-PERFORM (pairs with PERFORM). It sounded okay at the time, so I kinda went with it, but now the time has come to move on from it. No real reason other than “it's time”.

Where do I go from here?
I start writing more. Since I don't have to jump through multiple hoops for a static site generator, I can pop open a browser and start writing. I may eventually get the iOS app as well, but we'll see. For now, stay tuned as I get things sorted out and moved over.

I'm still debating where I want to go with the blog. On one hand, 72 bucks a year for a fully managed software stack along with an easy to use interface and iOS apps if I want to purchase them does seem very tempting. On the other hand, for about half of that price I can set up a VPS and WriteFreely and get most of the functionality I want. The third option is to use Zola with Netlify. Netlify hosting is free, but now I need to deal with writing files, generating them, uploading them and so on, which does provide great flexibility but these days I just want to be able to pop open my iPad or a browser and write about what I'm doing or life.

That brings the choices to WriteFreely, or write.as. WriteFreely still requires a VPS, which would be another server and software stack for me to manage. Write.as Pro also comes with photo hosting. I think at this point, the choice is clear. Write.as, here I come!

Now, do I use my email-only domain, endperform.com, or a new domain. Decisions, decisions. Anyway, stay tuned. I'll be slowly porting relevant posts from my old blog over here.

Fun Times at the Fox

On February 26th, I got a chance to take out a bucket list item, which was seeing MST3K Live all thanks to a lovely friend. Said friend could not attend, so I ended up going with another friend who also enjoyed MST3K. For those who don't know, Mystery Science Theatre 3000 (MST3K) is a movie riffing show. The premise is a guy was shot into space to watch bad movies as an experiement, and he built himself a couple of robots to keep him company. They go into a theatre and riff on some of the worst movies ever. It's quite entertaining. Now, imagine that show as a stage show (and yes, they did have a movie) with the original test subject (Joel) and you're in for a treat.

I've been in Atlanta for 13 years now, and I had never been to the Fox Theatre. When we arrived and got through the security checkpoint and there I was, in the lobby of this beautiful theatre. I could have spent hours just checking it out and exploring, but we were there to take in the show, and what a show it was. I don't think I've laughed that hard in quite some time. It was worth a bit of being uncomfortable (I'm not the smallest guy, so the seats were a little tight) but it was most definitely an amazing time. 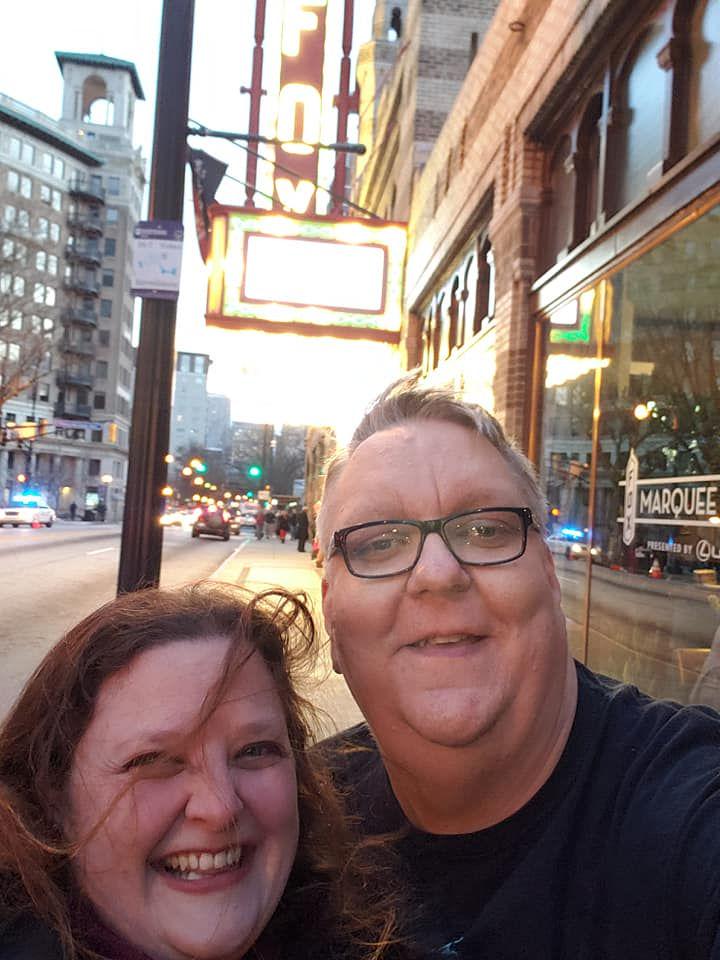