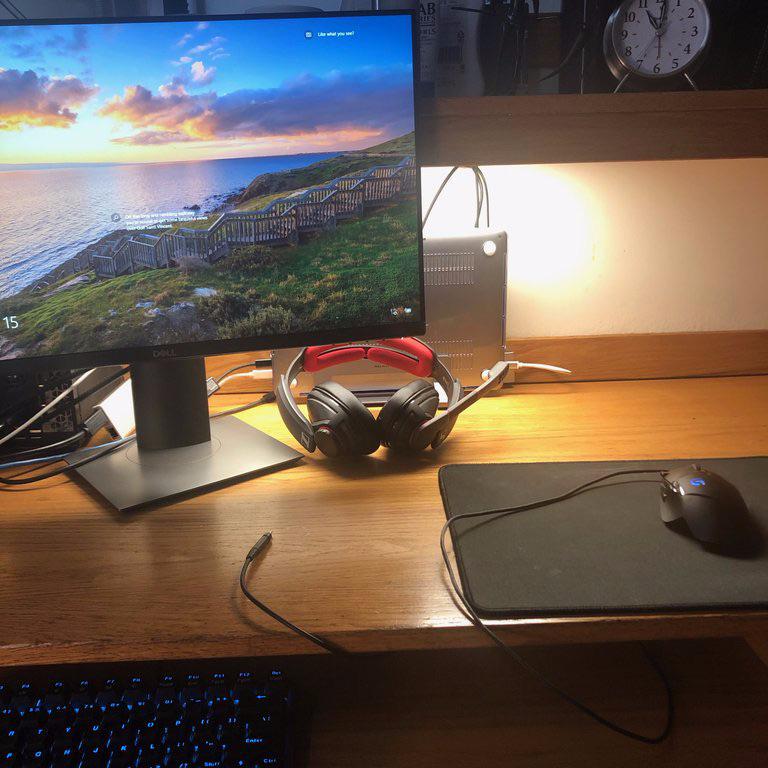 Can a gamer also be a minimalist? Of course. Gaming provides value in many of our lives, so many minimalists choose to keep it.

At the same time, maximalism is all-so pervasive in the gaming industry. It is far too easy to fall into the master race to own the latest rig with the rAy-TrAcEd GaMiNg GpU and RGP-POWERED GAMING HARD DRIVE. (Seriously, what does the word “gaming” on a product label mean anymore?)

I used to own a fully-fledged gaming setup. The physical clutter created by the tower, the peripherals, and the yarn-ball of cablesTM not only disarrayed my room but also my mind. My attention was always fragmented, as my gaming rig covered much of my vision.

When I had to move to another continent to study, I finally decided to go for a more minimal gaming setup. One that is small and portable enough that I can pack it into my luggage.

New and exciting emerging technologies allow us to pack performance into an increasingly small footprint. There are many options available, from a standard living room console to eGPUs.

A note of warning! Buying new things in order to become more minimalist is antithetical to the spirits of minimalism. Consider switching to the following setups only if you need to get rid of your existing setup anyway. If you are not a gamer, acquiring a minimal gaming setup is not really minimal, either.

While us PC gamers often scoff at the lowly console gamers, consoles are a great option for those that want to couch-game with friends. Consoles also feature exclusive titles that PC gamers can only play through workarounds like emulators or the PlayStation Now.

In my personal preference, however, needing to pay a monthly subscription to play online games were deal-breakers and not having access to a keyboard and mouse setup were deal breakers.

For most, a gaming laptop is the perfect solution. From budget options to state-of-the-art low-profile gaming behemoths, there's something for everyone. I love that manufacturers are moving away from flashy gamer-y look and adopting a more office-suitable design. Newer devices have become remarkably good at packing performance and thermals as well.

If you're a Windows user, a gaming laptop is a no-brainer. That being said, as a diehard macOS power user, the difficulty of hackintoshing a laptop made this option not viable for me.

The performance that can be put into a small form-factor these days is truly breathtaking. There are commercial products and DIY builds that are a marvel to witness, and a burden to the wallet at the same time. If you really need a desktop gaming PC the size of a console that can run the latest AAA titles at Ultra, go for it.

It's “The Netflix of Gaming,” they say. You pay a monthly or an hourly fee for the ability to run games on a remote server with the latest hardware. You stream those games through the internet, much like how you would stream videos.

Not only do you need a fast and reliable internet connection, but you also need to live in an area close to a data center. That probably means the proximity of a large American city. Another challenge is the same one that Netflix is facing: platform-exclusive titles. You may need to subscribe to multiple streaming services and still be unable to play some indie titles.

A potential alternative is to “rent” an entire PC through a service like Shadow. You get to use it as your own Windows PC, only through a browser. That means you can play any game you own on the Windows platform. And perhaps, this really is the future. My experience with the PlayStation Now can be succinctly summarized as “alright for the price.” As someone that lives outside of the service region for a third of my year, however, it just quite isn't there yet.

It's great fun to go to an internet café with some old friends whenever I go back to Korea, or a “PC Bang” as is called there, and jam some esports titles together. You would pay around a dollar per hour to play any popular esports title on the most powerful rig you can dream of. It's a shame that they're not a thing outside of Asia.

Finally, this is my setup! I use an ultrabook with an external graphics card, which means that the laptop outsources the graphical load to the eGPU. The laptop and the eGPU can communicate fast enough to run video games through the new Thunderbolt 3 technology.

An ultrabook + eGPU setup gives me the power of a desktop PC when I'm at home, while also providing me the portability and productivity of a laptop outside.

The setup also has minimal clutter. When I am gaming, I only need to plug in two USB-C cables: one from the eGPU, and another from a USB-C docking station.

Here are the nerdy specifics:

I use 2017 13'' MacBook Pro with an Aorus RX580 Gaming Box. My USB-C hub of choice is the Plugable USB-C Docking Station. It has power delivery, an HDMI port, a LAN port, 3.5mm audio in/out ports, two USB 2.0 ports, and three USB 3.0 ports. That's plenty! The only glaring omission is an SD card slot for the creatives out there. My current usages for the USB-C dock are:

The setup was not quite plug-and-play. eGPU is an emerging technology, so making a setup work often requires scouring through egpu.io to find user guides by early adopters.

While the AMD graphics cards are officially supported by Apple on the macOS side, it's up to the user to make it work on Windows via Boot Camp. I experienced the dreaded “error 12,” which means that Windows can't allocate enough power to the eGPU. Thankfully, an egpu.io guide provided a fix. If you want an out-of-the-box experience on Boot Camp, I recommend buying an Nvidia graphics card instead. The tradeoff is that it won't work as smoothly on macOS.

There is also a performance loss of around 10~15% even if you connect the eGPU directly to a monitor. Using internal acceleration on the laptop instead of an external monitor results in another 10% loss.

At the end of the day, this eGPU setup outputs over 60fps on titles like Overwatch and NieR: Automata. Those that want to run more graphically demanding at higher settings should consider using a graphics card that's more powerful than an RX580.