What should I read next? A complicated way to make a simple decision

Problem #1: there are too many interesting media experiences out there, with more being added every day.

Need #1: a way of wishlisting all the items that I’m interested in watching/playing/reading/etc.

Problem #2: modern media platforms have limited and shifting libraries of content, so any platform-based wishlist will be incomplete and fail to keep track of items outside of its library.

Need #2: a platform-agnostic way of keeping track of all the media I’m interested in.

Problem #3: with so much out there I can’t choose what I want and get analysis paralysis scrolling through the hundreds of items I’ve marked as interesting.

Need #3: something that will do my choosing for me.

Need #4: a way of shaping the random choices to my liking.

Enter: the Media Captain — a bad name for good thing.

Here's how it works:

Each type of media (books, movies, games, etc.) gets two buckets. The first is the “Ocean”, which I add to whenever something interesting surfaces admist the waves of my digital life. I hear about a cool book or see an announcement for an interesting-looking game, and it goes on my Ocean List for that medium. I'm essentially just bookmarking it so that I don't lose it later. These lists are just tabs on a spreadsheet in my phone's notes app, and this solves Need #1 and Need #2.

Here's a screenshot of my current Movie Ocean: 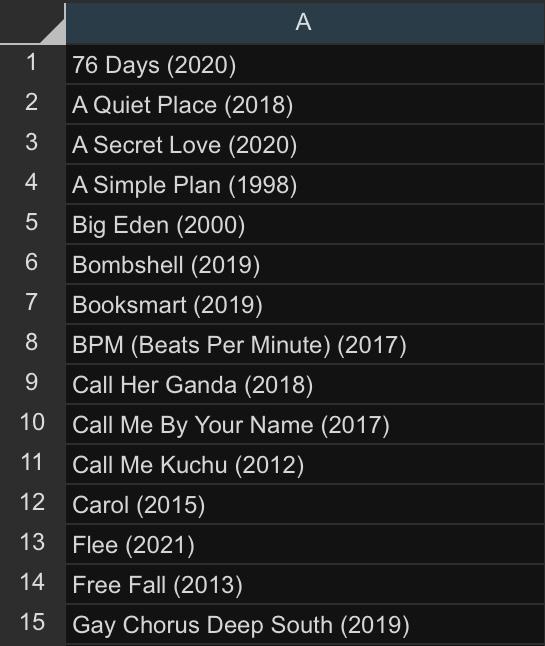 Because there's an actual ocean of content out there, I end up adding a lot of items to my personal “Ocean Lists” in my well-constructed but poorly-metaphored setup. We're talking dozens if not hundreds of items. My current Movie Ocean has 87 entries, and it's one of the shorter ones. I simply find too many things interesting, and we're also living at a time where it has never been easier to create or access interesting things, so more are being made every single day! This is what creates Need #3. If I want to read a new book and I consult a list of hundreds of them — especially when that list includes only things that I myself have identified that I'm interested in — then it becomes nearly impossible to decide on a single one.

For a while, I had the spreadsheet select a random entry from that list for me, as a way of cutting through the analysis paralysis, and while that worked, it created Need #4. Many of the items on my lists come from recommendations from friends or content that is incredibly timely — like how Squid Game blew up overnight. If I simply throw those on a list of hundreds and wait for random chance to select them, it's likely that it'll be years before I get around to them, long after many of them have left the cultural zeitgeist or the currency of the recommendation has “expired”, which was what was driving my interest in them in the first place.

As such, the second bucket each media type gets is something called a “Deck” — named in my mixed-metaphor system because they're “on deck” and because I “draw them” like cards from a deck into my current “hand”, even though it's called a deck.

Listen, I never said this naming made sense.

A Deck is limited to 10 entries. That is a hard limit, and it can NEVER go above that! To fill one up, I look through my Ocean Lists and choose the most interesting and relevant items to me at the time. I ask myself as I go: what are the things from this Ocean that I'm most interested in right now, whether because they're current, they fit my mood, or they're an area of focus for me at the moment? I also, at this time, identify where on earth I can actually find the content, as modern media platforms are, as identified in Problem #2, constantly shifting landscapes.

Here's a screenshot of my current Movie Deck: 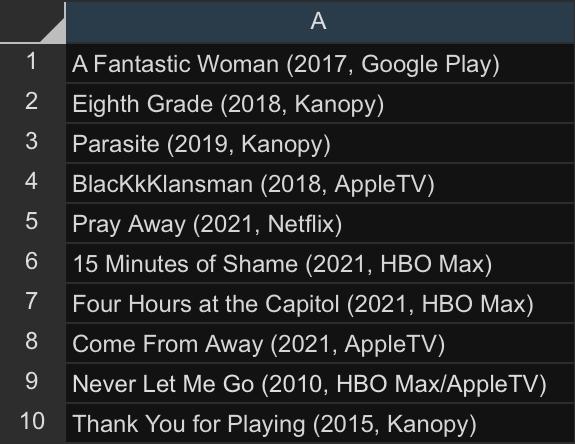 You can see that this one is full at 10 items. As I watch movies they get removed from my Deck, and when the list gets down to around 5 is usually when I go back to my Ocean to draw back up to 10. Need #4 is solved! I've shaped the list.

Which brings us back to Need #3, which is only partially solved. Sometimes I just pull something straight from the deck and it's easy to choose because my choices are so narrowed. Sometimes, however, I'm in the mood for someone else to do my picking for me, which is where I yield to my Media Captain.

The Media Captain looks at my Deck and chooses two items at random. Then, instead of making a big decision from lots of choices myself, all I have to do is pick one or the other — this or that. Easy!

Here's the Captain rolling choices for my aforementioned Movie Deck:

What am I more in the mood for — a documentary, or a musical? Something heavier, or something lighter? My decision isn't a protracted choice across dozens of different items but a simple binary. The Media Captain cuts through the noise to present me with two things I definitely want, and I just have to pick which one speaks to me more at this present moment.

And now, zooming out, we can see the real benefit to this whole elaborate setup — the Captain rolling choices not just for movies, but for my entire media ecosystem. After all, it's not just movies I'm interested in. I've got a lot of different interests, each of which have their own Decks and Oceans.

Instead of tackling that all myself, I instead yield to my Captain: 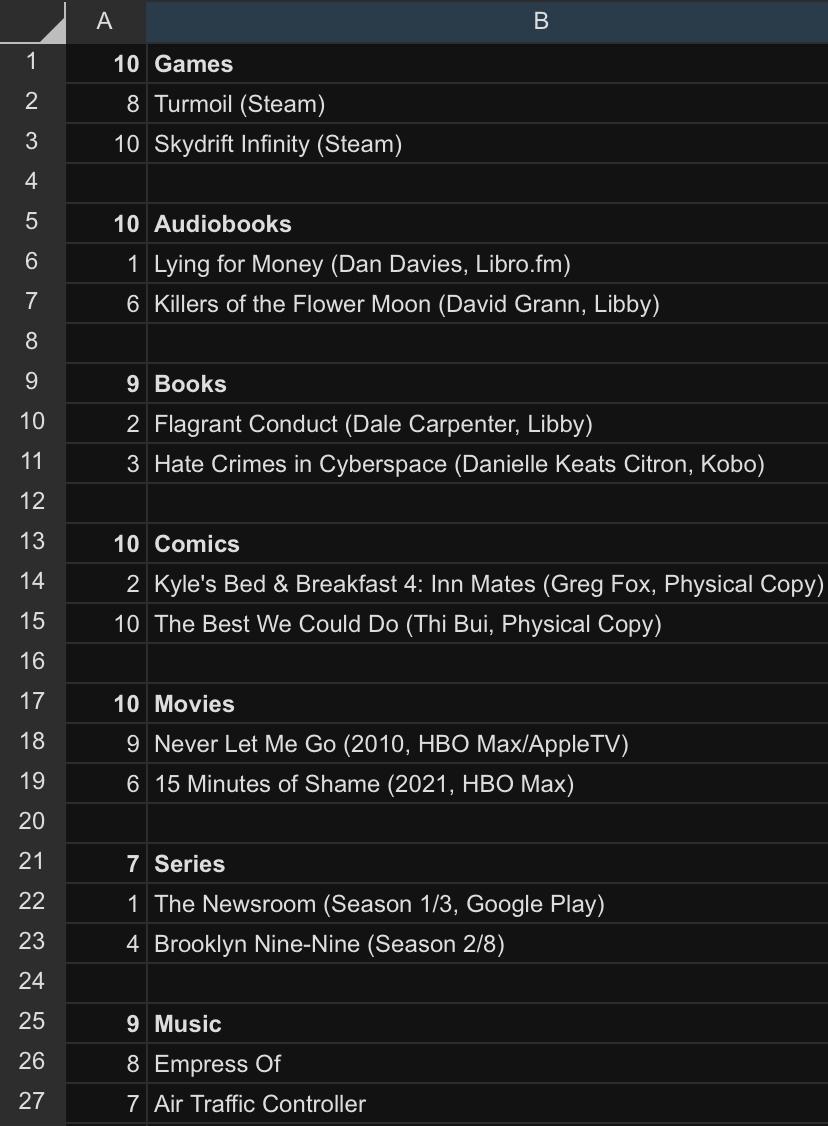 This shows the real power of this whole unnecessarily elaborate and metaphorically misaligned setup. Whenever I'm ready for new content, regardless of the medium, I can consult my Media Captain for easy and instantaneous choices.

Benefits and other details

Why bother with this whole setup? And why bother typing up all of this to share?

Well, this has actually been an iterative process that I've developed over years in response to the absolute explosion of content that became available to us over the 2010s. There is simply so much out there, available in so many different places. Traditional media channels have been replaced by a whole slough of new platforms, and the barriers to content creation have never been lower. There is more content available in more places than there has ever been before, and that statement will continue to become even more true over time. The Ocean part of this setup developed because I simply couldn't rely on my memory to be able to recall all the cool stuff I was hearing about.

The Deck part developed because my Oceans became, well, oceans. I had access to too much content, and I needed some way of navigating those horizonless waters. Prior to developing this setup, I was spending more time choosing what to watch/read/play than I was actually watching/reading/playing. I'd focus and fret and analyze what to do and end up doing nothing in response to that. Instead of watching a twenty minute episode of a television show, I could spend twenty minutes trying to figure out which show to watch! It was wasteful and backwards, turning entertainment into work that caused me to avoid entertainment. Why do I do that?

With my Captain at the helm, the time-to-media is minimal. I can pull up the spreadsheet on my phone, make a decision instantaneously, and know immediately where to go to access the content. Because I've shaped the choice by choosing the Deck the Captain is choosing from, I can know that the content available is something that is interesting to me now, as opposed to two years ago when I put it in my personal Ocean and have long since forgotten why it was there.

I somewhat regularly prune my Oceans, usually as I'm going through to replenish my Decks. As I'm looking up information on the titles to remind myself of what they are and why I was interested in them in the first place, I'll come across some that have fallen off in appeal. Those get discarded entirely and never make it into a Deck. I wish I was more judicious and cutthroat with this so that I could not let myself make lists of hundreds of items of interest, but I've long given up on the idea that I'll ever have a tightly curated or “finished” list of interests to get through. The rate at which I read books will always be less than the rate at which interesting books find me, for example, so I expect these Oceans to only get bigger over time, and that's fine.

The process of selecting items to go into my Decks is fun and was an unexpected benefit of this setup. It's a feeling similar to that of going to a bookstore and browsing the shelves, looking for the specific titles you want to take home. It's not shopping — I'm just arranging information in a way that's meaningful to me — but it definitely scratches that same itch.

I've also found that the Captain is good at getting me to get around to media that I'm interested in but that would otherwise fall by the wayside. Some content is interesting but is less immediately appealing or is more demanding than others, so it's easy to select against that over and over again, leaving something more boring or difficult to churn under the waves but never fully surface.

As items get removed from Decks, I add more to the end, which means that the remaining items move up the list. The higher the spot in a Deck, the longer it has been in there. The #1 spot is held by the item that has been in the Deck the longest.

When I ask the Captain for recommendations, and they return two items for which I have equal affinity and interest, I choose the one with the higher spot on the list — the item closer to the #1 spot. This means that, all other things considered equal, I'm choosing the one that's “older”. Likewise, if I notice an item has been in my Deck for a while, especially if it has held the #1 spot for a long time, I'll often deliberately choose it simply to get it out. I like that there's a sort of upward pressure built into the system, as it encourages me to engage with media that I'm interested enough to self-select into but that I, for whatever reason, often avoid actually initiating with.

I've used the Captain system as I've described here for several months now, with previous iterations of its setup going back years. I don't know if this is its final version, but thus far I'm happy with how it works and haven't yet identified any new Problems or Needs that I feel need addressing. I share it here simply because I know I'm not the only one navigating these Oceans of content, and someone else might be wanting to recruit a Captain of their own.