(this is an adaptation of a video essay of mine, which you can watch here.)

If you want to understand the function of mythology in God of War, both the original early-2000s series of games and their rebirth with 2018's God of War and last year's God of War: Ragnarok, consider that the titular “god of war” is you. 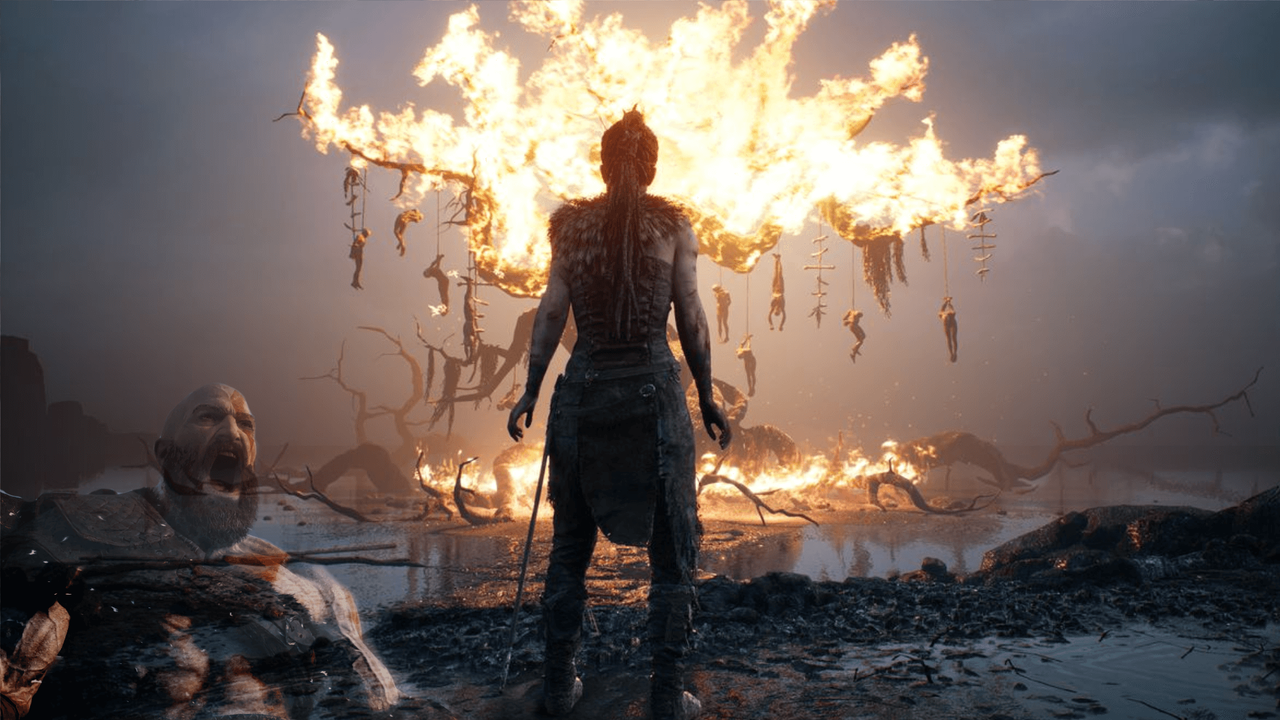 Kratos is a sociopathic monster across the original franchise, and it's a miracle that the newer games manage to redeem and soften him enough to be empathetic without forgetting his past, but regardless he is both player avatar and unstoppable force of destruction, able when willing to murder any god in any mythos. His struggle in the latter games is not about whether he can kill yet another pantheon, but whether he wants to.

As a result of the centrality of this power fantasy, myth and storytelling in God of War is literalized, because any god is as much a corporeal part of the universe as Kratos himself. Gods are superheroes in this context: capable of incredible feats of strength or knowledge, but otherwise practically human, with explicable motivations and emotions and patterns of behavior. Even the world serpent Jörmungandr is, like, an old guy with old grudges who happens to be a big snake.

God of War's Norse duology makes this clearest in its quieter moments, when you're paddling down rivers with your disembodied head friend Mimir, who loves to tell you anecdotes about the gods. The stories he tells are more or less ripped straight from the pages of our few primary sources for Norse mythology (the Prose Edda and Poetic Edda, the former a prose text written post-hoc by one guy a couple hundred years after the Viking Age, and the latter a collection of transcriptions of oral-tradition folktales), but Mimir tells them not as a campfire whisperer of strange odysseys but as a literal guy who was literally there for most of them, or at least knows all the people involved. It's less “wondrous tales of the cosmos” and more “coworker gossip.”

There's nothing wrong with this approach to appropriating myth for contemporary storytelling. It's the same approach taken by actual superhero properties, like the Marvel Comics treatment of Thor and his various family and friends. But it's only one approach, and where it provides opportunity for nuanced storytelling, it also cuts off many more poetic approaches, and in reinforcing the power-fantasy tendencies of AAA media properties, even in its best-written moments it has more in common with the lineage of adolescent exploitation emblematic of the original franchise and from which the newer games strive to find distance.

Hellblade: Senua's Sacrifice takes a different approach to its integration of Norse mythology. Much has been said about Hellblade's use of mechanics and aesthetics to force players into the mindset of its protagonist, Senua, a woman struggling with the omnipresent effects of psychosis and trauma. I've seen less discussion, though, of the use of Norse mythology itself as another factor in that effort.

(I'll try to avoid spoilers here, but it's crucial to understand that in Hellblade it is hard to know if anything that happens, any supernatural effect or monstrous sight, is real in a concrete sense, outside of the tortured mind of Senua herself.)

Senua is not of the Norse people – she is a Pictish warrior, part of a culture based in what is now Scotland, a people who in this era were under constant assault by Norse viking conquerors. To her, Norse myth is a cultural artifact of the oppressor, one of the tools they use as a means to subjugate and murder. She also doesn't know any of their tales first-hand; she is not even part of their oral tradition. Instead, she learns the myths via a friend and former prisoner of the Norsemen, a man who calls himself Druth, seen in rare flashbacks and heard via mainly optional “lorestones” accessed throughout the game.

Druth, we learn, told Senua stories of the Norse gods and heroes the same way he heard them: as campfire tales and fables, morality plays or explanations of inexplicable natural phenomena or as portends of doom.

…which, of course, is how these existed in their time. Consider for example the Bifrost, the rainbow bridge connecting Asgard to Midgard, uniting the worlds of god and man. It's a literal bridge in the Marvel Cinematic Universe, and used kind of like a spontaneous realm-traversing skateboard in God of War: Ragnarok, but the true legend was an explanation of actual rainbows, at a time when the properties of atmosphere and light were not understood at a scientific level.

There's a God of Thunder in Norse, Greek, and other pantheons because thunder is a terrifying, inexplicable siren from the clouds, and you can only say “I don't know why” to your scared children so often before you yourself become scared, too.

In these old traditions of mythmaking, gods are forces of nature. They're not only capable of or actively constructing the means of such phenomena, but also as inaccessible and terrifyingly unknown as those phenomena. The legends only humanize the gods to provide archetypal throughlines of narrative: Odin's insatiable thirst for knowledge, Thor's cantankerous drunkenness, Zeus's tendency to shapeshift into forms that can have sex with mortal ladies. Otherwise, the gods – their true shapes, their deep motivations – are about as knowable or conceivable as H.P. Lovecraft's eldritch abominations.

Ragnarok itself–the event, not the game–is the perfect extension of this: it's an apocalypse story, fantastical and terrifying in equal measure, a depiction of the self-slaughter of the gods that will bring an end to the world of man and god alike. It is incomprehensible and practically irrelevant to the daily life of a Norse traveler; its power comes not in anticipation but metaphor. That Ragnarok cannot be averted is central to its importance in the mythos; in the brutal and ugly time of the vikings, the implacability of death in all its forms was perhaps the only immutable rule of law.

In Hellblade this form of oral, metaphorical tradition refracts through the mind of Senua, who melds the iconography and hazily understood narratives of mythology into her own hallucinations and terrified, confused impressions of her environment. The implacability of death figures deep in her own background: at the game's opening, her loved ones have been ripped from her by Viking raids and by more intimate, domestic horrors.

Just as, in their time, Norse myths formed narrative around the inexplicable to instill meaning within the chaotic rhythms of life, so too does Senua hang onto those foreign myths in a desperate attempt to create focus and purpose out of her apparent helplessness in the face of loss. When Senua encounters gods or finds evidence of their work in Hellblade, it is not human or explicable or empathetic. She finds, and is appropriately horrified to behold, mounds of charred corpses, rivers of blood, and distortions of reality. The real world is violent and cruel to her, and so too is the supernatural as she perceives it. Metaphor and reality half-merge, blurred at the edges but all too clear at the core.

Mythology is another lens through which Hellblade shows us what Senua sees, using Norse mythology not to create a cast of heroes and villains but to emphasize its protagonist's powerlessness. Senua feels that she must enter hell itself–Helheim–to atone for what she imagines to be her gravest sins, and Druth's fabulist legends give her a viewport into what hell must be. Her mind turns those stories into the thread she follows, but her mind also betrays her at every turn. Myth is both a guiding thread and a hopeless horrorshow, and she is rarely confident in her ability to overcome it.

But even as it creates this haze of metaphorical fear, Hellblade is specific. Its portrayal of a troubled mind, crafted with the guidance of several mental health experts, is positioned deliberately within a particular place and time. In the Viking Age where Senua is born and raised, she must battle not only her internal demons but also the ways in which society around her cannot understand what is happening to her and the ways in which her contemporary age is demonstrably ugly and cruel. She is labeled as cursed and plagued, isolated and exiled; she finds evidence of her mental horrors in historical nightmares of mass slaughter and sacrificial murder.

Hellblade uses Norse mythology just as deliberately, as a warped reflection of the mind.

The specific tales it plunders are outsized in their horror and violence; the lessons it imparts play into the most paranoid nightmares that religion can conjure. In this way it casts Senua's specific mental illness not as inhuman but instead as an extension of our tendency to pattern-seek, to dig desperately and endlessly for meaning inside the most horrific and tragic events in our lives, to demand even a grotesque explanation for the inexplicable if it opens a path forward.

God of War, by contrast, uses mythology as a lore explainer to paint in the details of the principal deuteragonists and antagonists of its universe, and to fill out the moments between checkpoints in lieu of a fast-travel system.

Hellblade has its own problems of depiction, too, about which much smarter and more informed folks than I have written and spoken at length in years past. But Hellblade compels me because it treats religion and myth as ways that the mind settles or unsettles itself within the blood and the weird of the physical. It's more honest about why we have always told these stories; it is explicitly uninterested in satisfying the player or placating the powerless with simple fantasies of heroic god-killers.

If Kratos is the ultimate power fantasy, then Senua is the sort of unseen individual living at the scale of Kratos's toenail, terrified both by what little she can see and the prospect of what must exist beyond her sight.

For reasons that are maybe clear by now, I'm not optimistic about Senua's Saga, the upcoming Hellblade sequel; if ever there was a story that did not ask to be expanded upon, it's this one. There are few ways I can imagine Ninja Theory elaborating upon Senua's world that won't dilute or ignore the depiction of mythology that I value in their 2017 title.

I do hope they manage that tightrope; I hope they're trying to manage it. I don't need more games about killing literal demons, but I think we have too few games where we wrestle with what it means to believe in demons.