We've lived in our house for about 15 years now. During that time whenever we've gone to do any DIY or have any building work done we discover some absolute balls-up that was perpetrated by a previous owner in the name of DIY. From the time we were having the bathroom refitted and discovered the false ceiling had no insulation above it and a hole in the roof (which explains why it was so cold!). Also in the bathroom they'd knocked a hole in the wall for the wastepipe and done so by just removing 3 bricks and leaving it like that. Or when we went to have our kitchen extension done and discovered that someone had filled the whole of the kitchen floor in with concrete, which encased a load of the pipes, rather than try to properly put down a floor. Or the ventilation brick at the front of the house was just for display and not ventilating anything. The list goes on and on.

The last room left in the house to do any work on was our bedroom. We'd had the plaster skimmed and decorated then the next thing was getting new flooring put down. The guys came on Friday and started ripping up the old soundproofing boards that was nailed to the floorboards. However whoever had fitted them hadn't used tacks and had used full length nails. Which shouldn't be a problem but when one board came up suddenly there was a wet patch and water on the floorboards. Turns out a nail had been hammered into a water pipe for the heating system and sat there for all those years. We ripped the floorboards up there and grabbed towels and bowls to stem the flow then dashed to a neighbour that used to be a plumber but is now on furlough. He quickly got the radiators drained and the replaced the damaged section of pipe. God knows what we would have done without him. Well I do know: spend a fortune on an emergency plumber and have had to wait ages for them to arrive. Astoundingly during the time the nail was in there there had been no leak (as the there were no signs below where it was of water damage) but the floorboards there were really rotten so it seems some moisture had been escaping.

The flooring guys left for the day as they laid lino and didn't replace floorboards. Which left us in a pickle as we'd completely cleared our bedroom but putting everything into our son's room so both those rooms were out of action. We'd gone from a 3 bed to a 1 bed house! My wife decided she'd sort the floorboards out (we have an agreement not to do DIY together due to too many past arguments). Off she went to the local timber merchants with one of the removed floorboards. They were great, worked out what we needed and confirmed delivery for 7 days time. 7 DAYS?? To her credit she didn't burst into tears but almost did and they took pity and delivered the wood within 20 hours of ordering it. The next day (Saturday) my wife and a good friend of ours spent the day cutting and fitting new floorboards (using a circular saw borrowed from another neighbour). I was general gopher and made tea, tidied up, carried things up and downs stairs etc.

Job is a good'un but sadly the flooring people can't come until Wednesday to put the new floor down. So the sofabed for us for a few more nights. So grateful to have friends and neighbours that came through and helped us out; we also had various other offers of help we didn't take up.

Tomorrow my son's school is taking part in “Show Racism the Red Card” day and as such the kids don't wear uniform and instead wear something red. As he doesn't have anything red to wear he asked his teacher if he could wear 2 yellows. 😂.

On Saturday got to watch live football with some friends. Which was nice. Went to see Whitehawk vs Seven Oaks Town which ended in a draw though it had been 1-0 for ages to Whitehawk so we were hoping for a win. Crowd was limited to 400 but attendance was only 274 in the end (typical size crowd for the Hawks).

Highlights of the game are here

Though afterwards in my Hawks mates WhatsApp group my friend Steve sent his highlights:

Currently I'm reading The Farther Corner by Harry Pearson. Harry Pearson's The Far Corner is a great book and I got a bit evangelical about it. This is a follow up to that book so when I saw it was being published I rushed to buy it in hardback. Believe me I never buy a hardback but I didn't want to wait for the paperback to come out. 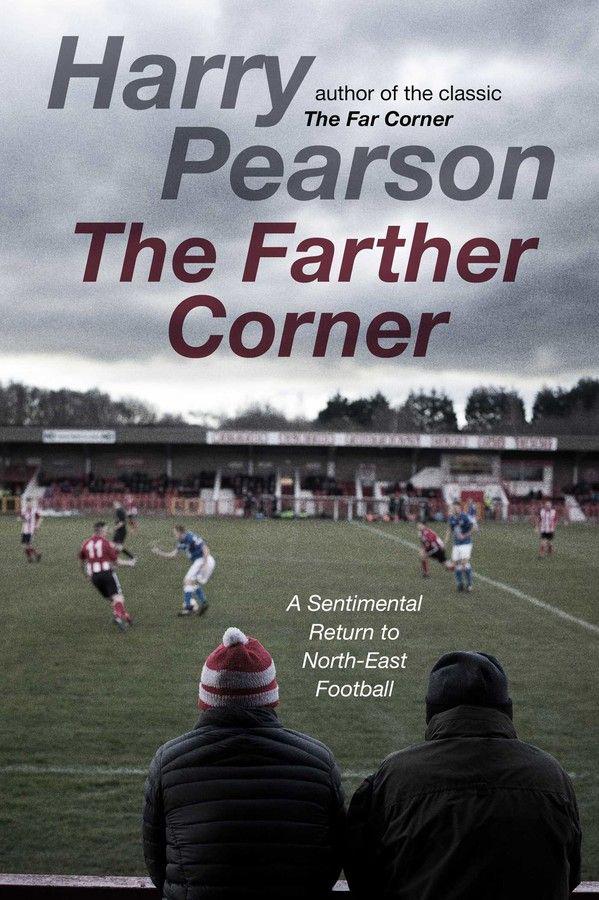 Ostensibly it is about football in NE England but really it is about people and because it is about people it is interesting and funny. Pearson is a great observer of humans and captures great exchanges between the people he meets or overhears. Non-league football has a lot of “characters” and Harry seems to encounter most of them. It's really a homage to the people of the Tyne and Tees areas. So far I'm currently on page 103 but I only started it a couple of days ago.

More a passing note than a blog entry but as mentioned previously I moved to iPhone from nearly a decade with Android. Still can't believe just how bad the iPhone autocorrect and typing experience is. So so infuriating.

Anyway another working week done and here comes the weekend.

There's a greyhound racing stadium near us; actually stadium sounds too grand for it so let's call it a greyhound track. It was built in the mid/late 1970s and has a squash/racquets club attached to it. Odd combination of businesses but hey it was the 70s! Since lockdown started both of these businesses have been shut though I think greyhound races restart there soon (as will the frequent animal rights protests too probably). The premises had been quite neglected for 5 months will not in use but recently they got cleaned up a bit. Weeds removed, rubbish cleared etc. As part of it a large bush that was getting unruly got dug up and from behind it this appeared: 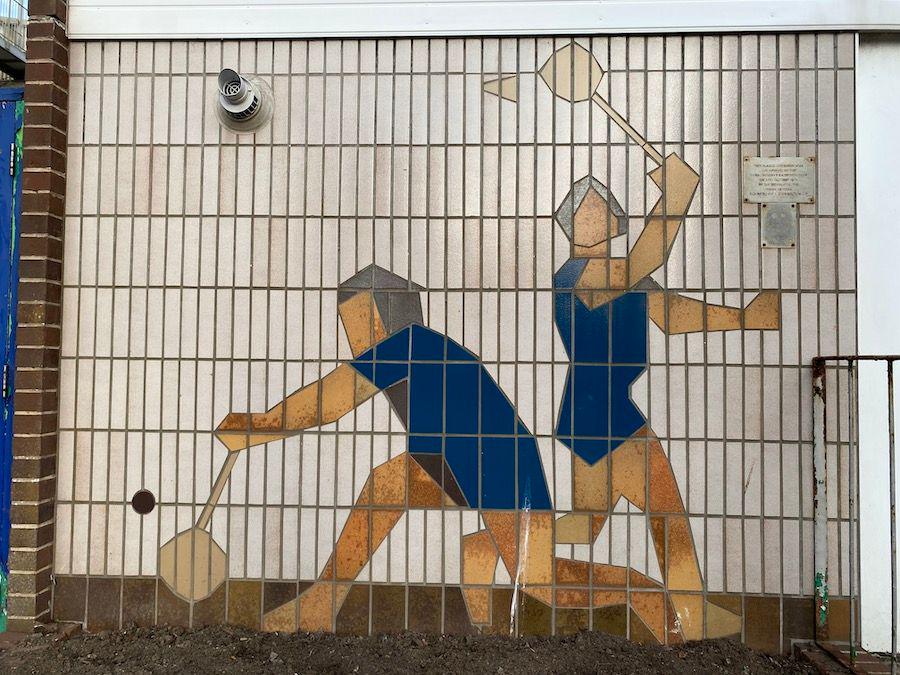 Which was obviously from when the complex was built but had been hidden for the whole of the 15 years we've live here. It's really good. I enjoy a bit of public art. There is literally no reason for that to be there other than to liven up and make the place look more interesting which really there should be more of.

A few minutes walk down the road from the greyhound track is this shop. We'd only ever known it as a moody kebab shop which seems to change management every 6 months. It was the sort of kebab place you'd never go to sober as it was generally ropey. It shut during lockdown, presumably as there weren't any drunk people staggering home from any pubs, and it having a new frontage. Which meant this incredibly well preserved sign is out in the open for a while: 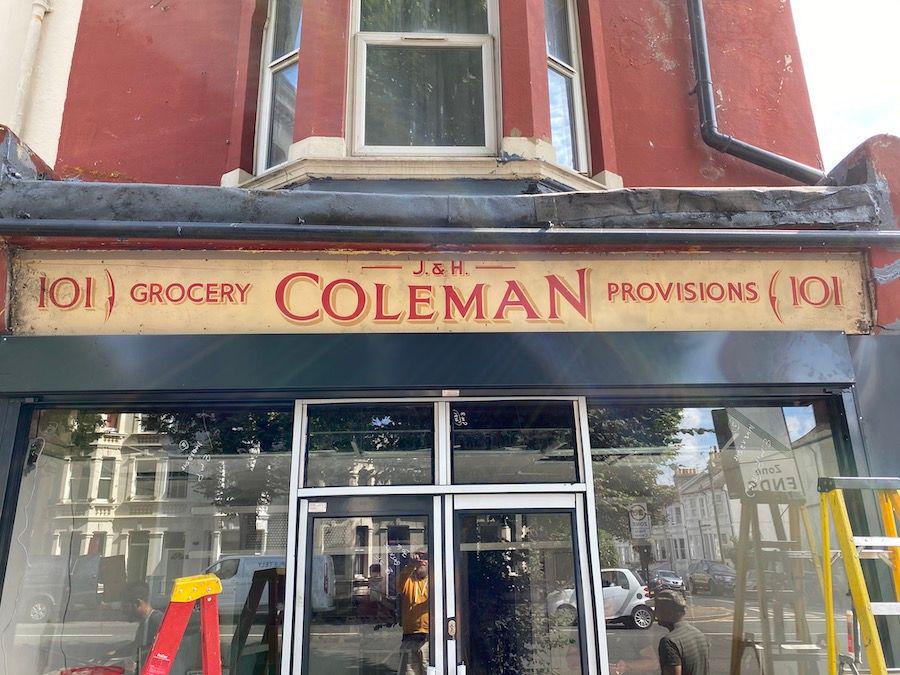 Love seeing these little glimpses of older layers in cities and towns.

(Yep for the eagle eyed that's me in the reflection!)

Last night going through an old notebook I came across this cutting I'd taped in. It has to be at least 10 years old, probably getting towards 20 years old. 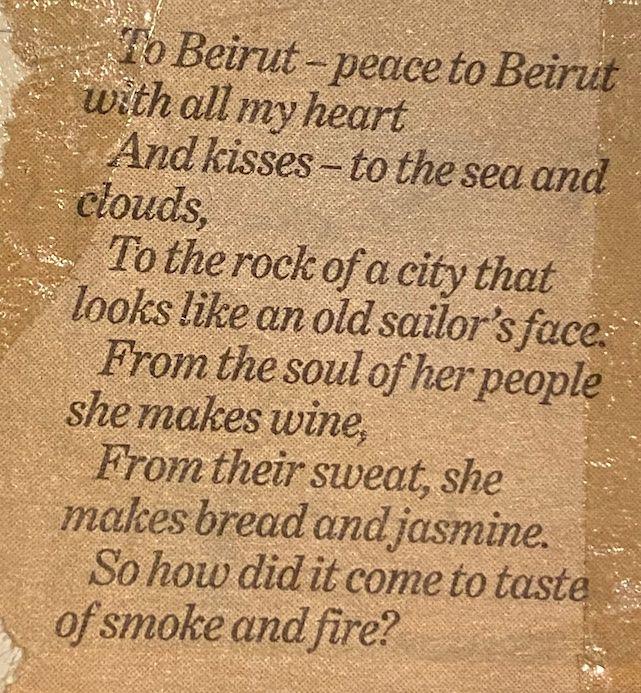 To Beirut – peace to Beirut with all my heart And kisses – to the sea and clouds, To the rock of a city that looks like an old sailor’s face. From the soul of her people she makes wine, From their sweat, she makes bread and jasmine. So how did it come to taste of smoke and fire?

100 Days to Offload is a blogging challenge started by Kev Quirk that I've been pretty lax at stickign to recently! Check https://100daystooffload.com for more info.

“My name is Luke and I'm an addict. A notebook addict. I've been buying them ever since I was kid. I thought I could handle it but I finally realised I had too many. Hopefully one day I will be able to stop buying them.” 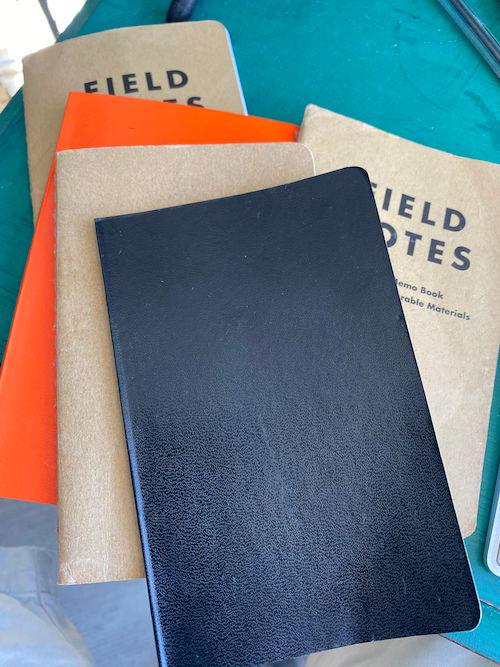 This morning whilst looking round my desk I finally realised I might have too many notebooks. These few are just ones on my working from home desk, there are more elsewhere around the house. My particular weakness is an A6 size cahier style notebook. Be it Moleskine, Leuchtturm1917, or Field Notes I'm there. Though any other cheap alternative would be considered too. This realisation came today as I was coveting a new limited edition Leuchtturm1917 with a metallic cover and I thought “what am I going to use it for?”. Normally I put random phrases or words I want to remember, titles of books to read or films to watch. Even lists of things I need to take note of. However I have more than enough already. Heaven forbid does the fact I came to this conclusion mean I am being sensible?? Have I finally grown up? Who knows! This is uncharted territory for me.

100 Days to Offload is a blogging challenge started by Kev Quirk that I've been pretty lax at stickign to recently! Check https://100daystooffload.com for more info.

Yesterday I was in the park for while my son had football training. Us parents on the sidelines end up talking all sorts of random things to kill the time and being British the weather was naturally one of the topics discussed. We were saying how we missed the sunny weather of previous months as unlike Basil we've had lots of glorious weather and relatively little rain. Of course the British Summer being what it is that meant while we were all on lockdown we had lots of sun and now restrictions have been eased it is a bit grey and drizzly.

I mentioned it was going to be St Swithin's day soon which means sod's law it is likely to be raining and got a lot of blank looks. None of them had heard of St Swithin's day. WTF? I'm not even religious and certainly wasn't brought up in a Christian household but I've known since I was little that the saying goes if it rains on St Swithin's day (15 July) it will rain for 40 days and 40 nights. Here it is copied from wikipedia:

Have you heard of this?

100 Days to Offload is a blogging challenge started by Kev Quirk. Check https://100daystooffload.com for more info.

The regular readers of this blog (yes both of you!) should recall I like reading and I like being frugal so it should come as no surprise to learn I like book swaps. Luckily my neighbourhood has several public bookswaps set up and also during lockdown lots of folks have been leaving books out on their front walls for people to take. Probably my favourite bookswap spot is the Stoneham Book Transformer: Partly I like it a lot as someone has constructed it then installed it guerrilla fashion in the street. Nothing like a bit of direct action to improve things for everyone.

A few roads away from me is the Hove book hut 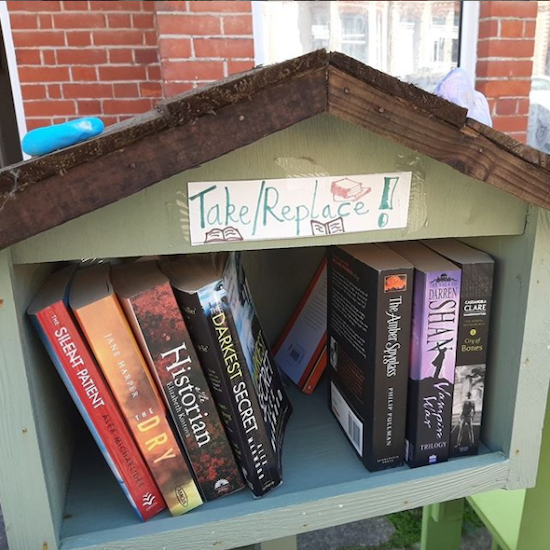 which has the misfortune of often being described as a bird house by locals on Facebook/Nextdoor etc and I know this annoys the person that constructed it in their front garden (as I had a chat with them one day while checking the books).

Mindful of the fact I've always got lots of books stocked up ready to read I try not to take too many books and limit it to books I had planned to read anyway or authors I like. That said this is my recent haul: 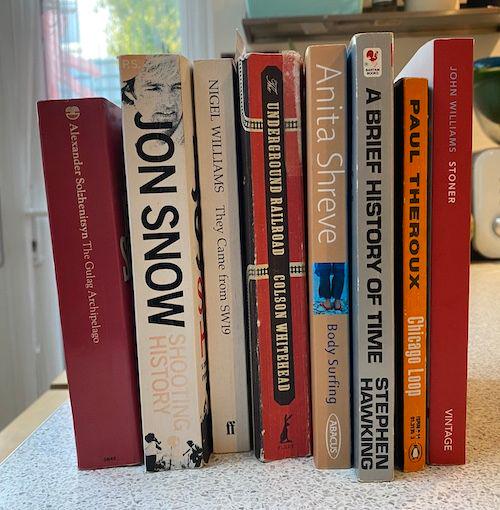 Better crack on with reading.

100 Days to Offload is a blogging challenge started by Kev Quirk. Check https://100daystooffload.com for more info.