A few years ago my wife and I went to a great talk at the British Library about how in Soviet Russia they made bootleg records from discarded x-rays. It was fascinating and entertaining. Ever since I've been on their mailing list for future events. While lots of them don't appeal, or while Covid lockdowns were in force were cancelled, their current Food Season had several that caught my eye. We did the first of them last night: In the Kitchen with Bill Buford and Jonathan Meades. 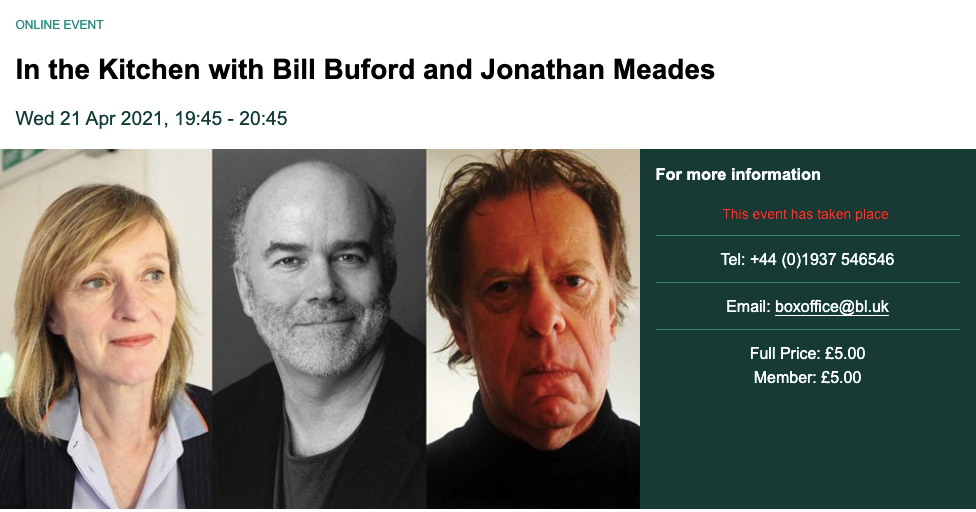 It's odd as as I don't associate either of them with food at all. Bill Buford I know of as the author of “Among the Thugs” which is his account of spending years among English football hooligans in the 80s. He's incredibly honest about how and why he was attracted to it and in his writing captures perfectly the feeling of when a crowd turn into a mob (I've never been a football hooligan but have been in crowds that have turned to mobs). Then Jonathan Meades was brilliant in his 90s TV shows Abroad in Britain, Further Abroad, Even Further Abroad. I'd have been 17 or 18 when Abroad in Britain came out and I loved it. Then his later shows such as Magnetic North were also good. If you've not seen of them there are loads linked to watch online from the MeadesShrine site. Well worth viewing.

The talk itself was interesting and entertaining but still a bit surprised I didn't know of the food writing of either of the guests!