All in on Pop!_OS

I could have alternatively titled this piece “In with two feet”, or “My hand was played”, or “Windows Sucks so now I'm 100% Linux”.

Microsoft Windows pushed an update to the machine Friday morning that rendered it useless. I'm assuming the service pack was supposed to make the computer run better, maybe more securely, but it just left it with a blank black screen. I spent about four hours doing everything the IT Help Desk experts of the Internet said I should but nothing worked. I could “Cntrl/Alt/Dlt” into the control panel but nothing from there. It wouldn't even boot into safe mode. Seriously dead.

I have a somewhat robust back-up strategy so I had all of my content (almost) saved somewhere else. I lost some text docs I had saved to the desktop and some PDF's I had recently downloaded but nothing irreplaceable. The true loss is the workflow. The software, the utilities, the folder structure, and the working environment you have spent the past three years perfecting. If anyone from Microsoft reads this – Time Machine, please. System restore points are awesome until you can't access them.

I keep an older (2nd gen) Lenovo Thinkpad X1 Carbon as an R/D machine. I use it for testing and playing with different systems and software. It has had multiple different flavors of Linux installed on it over the past two years but for the past few months it's been running the System76 published distribution Pop!_OS. I previously wrote (https://write.as/mattdotts/pop-_os-is-poppin) about the experiment and how much I liked the operating system. Saturday morning I followed through with my thoughts in that piece and installed Pop!OS on my main computer to be used as my everyday working system.

To let you in on a little secret, I did own a System76 Lemur Pro laptop since the time I wrote that article. Well, I owned one for about 72 hours. I purchased the machine the first day System76 made the new model (LEMP10) available for sale. After a month's wait, it arrived and it was beautiful. At least physically. I thought about writing a review but reasoned that wouldn't be fair to the company. There was nothing wrong with the machine. It was exactly as promised. The purchase was a perfect example of what happens when you buy items from the Internet without ever seeing, feeling, or hearing the product in person.

The absolute best review of the System76 Lemur Pro can be found in a Youtube video published by user Steve M. I will just add that if you are switching to the machine from the Lenovo Thinkpad X1 product line, and you really, really like the Thinkpad, you are not going to like the Lemur. I will also say the System76 people are top-notch and very accommodating. They stood by their 'no questions asked' return policy and the process was frictionless. Kudos to them.

Back to the crisis at hand. Saturday morning I blew out the corrupted Windows drive and installed a fresh version of Pop!_OS on my 5th generation Thinkpad X1 Carbon. Although this machine is three years old it is still a workhorse packing an Intel i7-7500u processor and 16GB of memory. 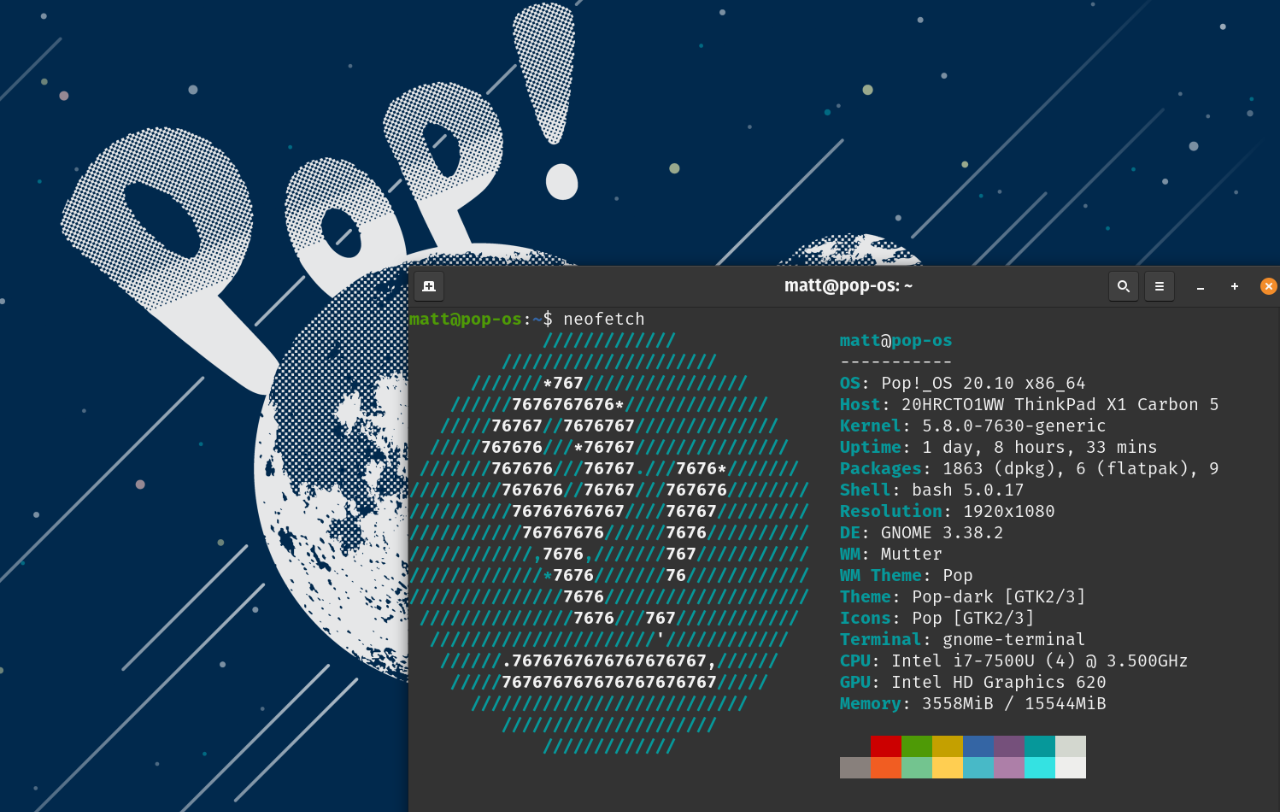 The Pop!_OS operating system loads without any configuration problems and works from the first boot. It just works.

So I'm now a Linux user and all in on Pop!_OS. I'm going to take some time and write a more detailed post about the process and how I set up my system so please return for that documentation.

Consider subscribing so you don't miss it.