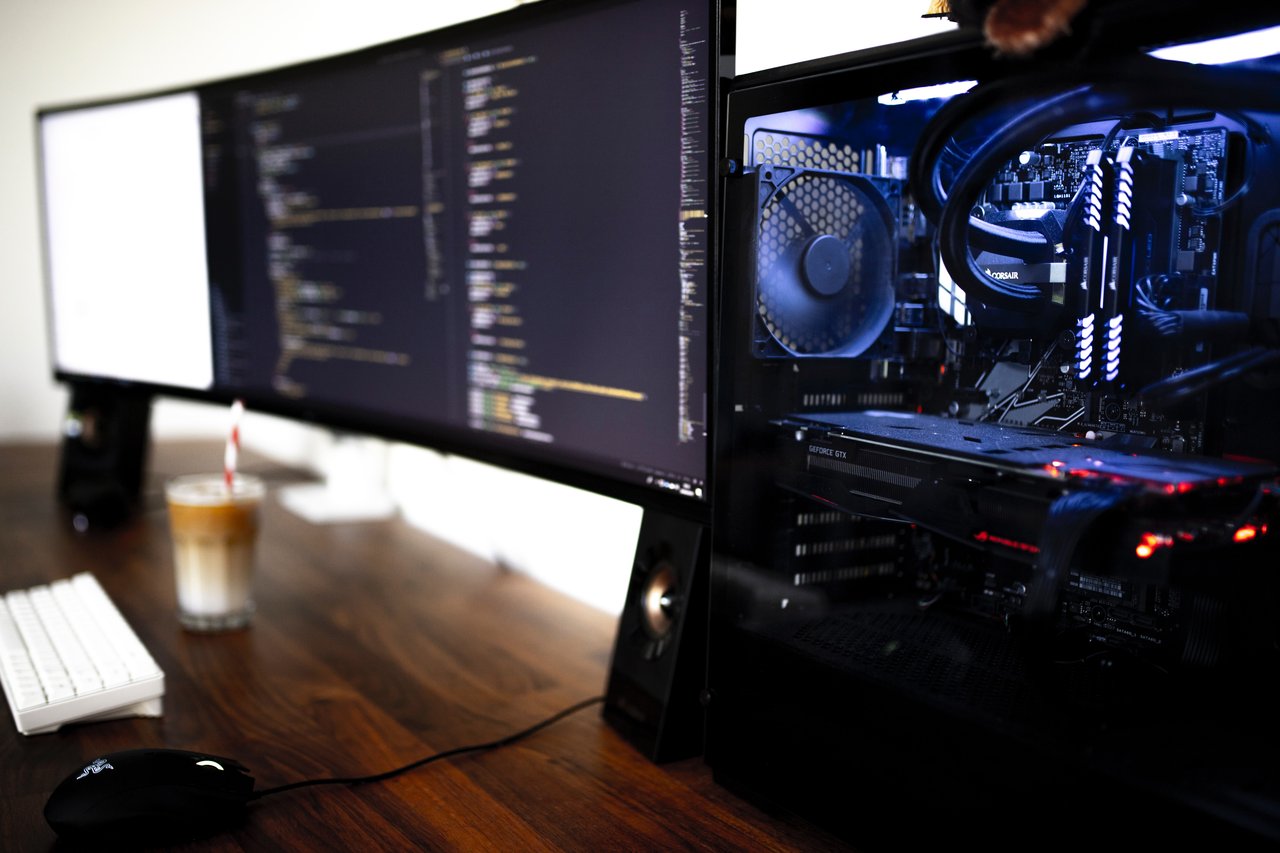 Validators, the rippled nodes that participate in the consensus process for validating transactions in the XRPL are instrumental in the decentralization and overall health of the network. The robustness of the XRPL largely depends on how diverse the list of validators participating in the consensus network is. Via XRPL Apps, the XRPL Developer ZIGXRP, has done an outstanding job in creating a platform to monitor the performance and reliability of these key players of the ecosystem, in addition to sleek visualizations leveraging on data from the XRPL Decentralized Exchange (DEX).

XRPL Apps includes three main features and the live details of its Rippled Stock Node Server, as it is shown in the website's homepage. The first on the list is the Validator Stats & Ranking, where you can look into the validator's ranking and statistics, followed by the recently launched Velocity of Value visualization and the Live Transaction Rates comparing BTC, ETH and XRP transactions per second. 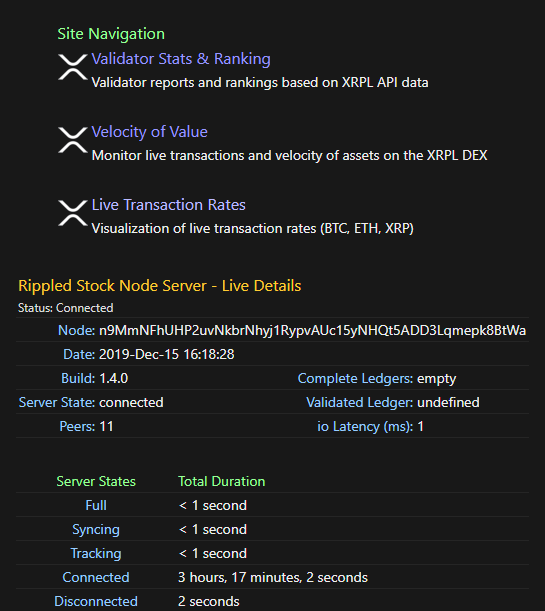 Just as we saw in Dev Null Production's XRPLORE spotlight earlier this month about Know Your Gateway (KYG), where XRPL gateways are evaluated, XRPL Apps offers what could be considered a Know Your Validator (KYV) feature consisting of a stats and ranking mechanism that aims to keep the finger in the pulse of the validators participating in the XRPL, by creating a method to evaluate and rank them in accordance with predefined criteria that will help monitor their overall performance in the consensus network.

In the main view of this feature, we can see four main figures:

Main Validators: The validators that are online at the time of accessing this view.

UNLs: Shows the online validators belonging to UNLs (Unique Node Lists) which contain validators that are deemed most reliable by Ripple.

XRPL Activated: The validators that have activated XRPL accounts (ergo, that can receive XRP tips).

Non-Ripple UNLs: Showing the percentage of trusted validators that are not run by Ripple (an indicator of decentralization).

As you click on the View Reports of XRPL main validators and health statistics, just underneath the UNL change tracker, you access a list of the XRPL's main validators (including their domain and public keys) with UNL status and sorted by ranking score.

The scores for validators are calculated in four metrics:

Further details on the criteria for each of the metrics can be found here.

To reward XRPL validators, XRPL Apps has teamed up with Eric Dadoun -the initiator of the effort- and Richard Holland to enable a tipping wallet (rMAkB8EWyvqNmj72at3q5dDEAAt4HA1YMA), for the XRP Community to support XRPL validators by rewarding them with a daily XRP tip, which is sent to validators with activated XRPL accounts taking into account their overall score.

The tipping wallet view shows the current balance in the wallet, QR code to donate, the address and also the total tips sent to the validators so far:

Back in the Validator Ranking & Stats main view, on the lower section you can monitor the validators' activity showing a dynamic view of:

◻️The proposed (or active, if you will) ledger the XRPL, including the number of validators involved.

◻️ Further details on the ledger validated prior to the proposed one that includes the total XRP involved, and the amount and type of transactions processed : 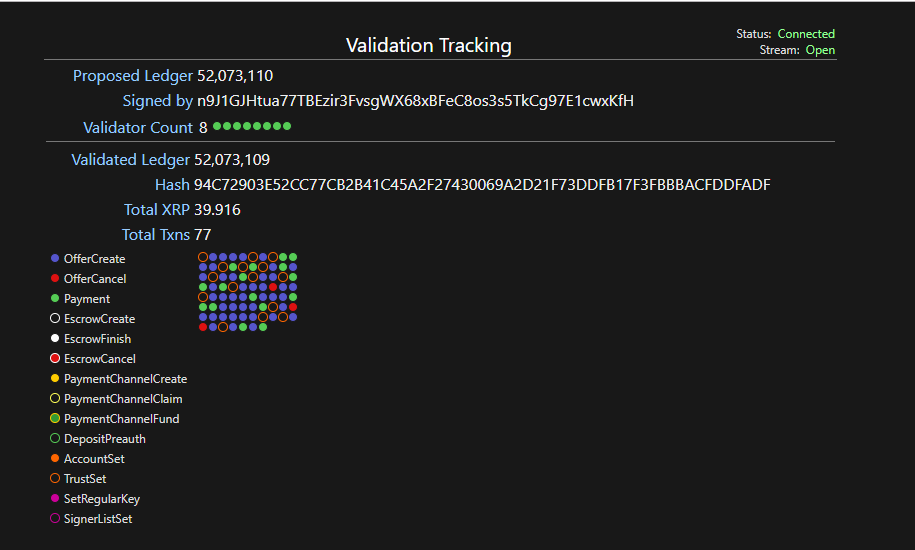 Velocity of Value is one of the most recent features added to XRPL Apps, on October 28th this year, with the objective of measuring how fast value in different denominations moves across Ripple's decentralized exchange over time:

Pleased to present a new project that looks at the $XRP DEX:

It monitors DEX assets over 24-hour periods and calculates the velocity of assets over time.
E.g. XRP/sec, BTC/sec, etc

And how does the Velocity of Value feature look like?

Across the DEX, 80 assets are monitored. Once the Internet of Value is fully up and running, the different fiat currencies shall show a significant increase, specially on those with active ODL corridors (MSN, USD, INR, etc). 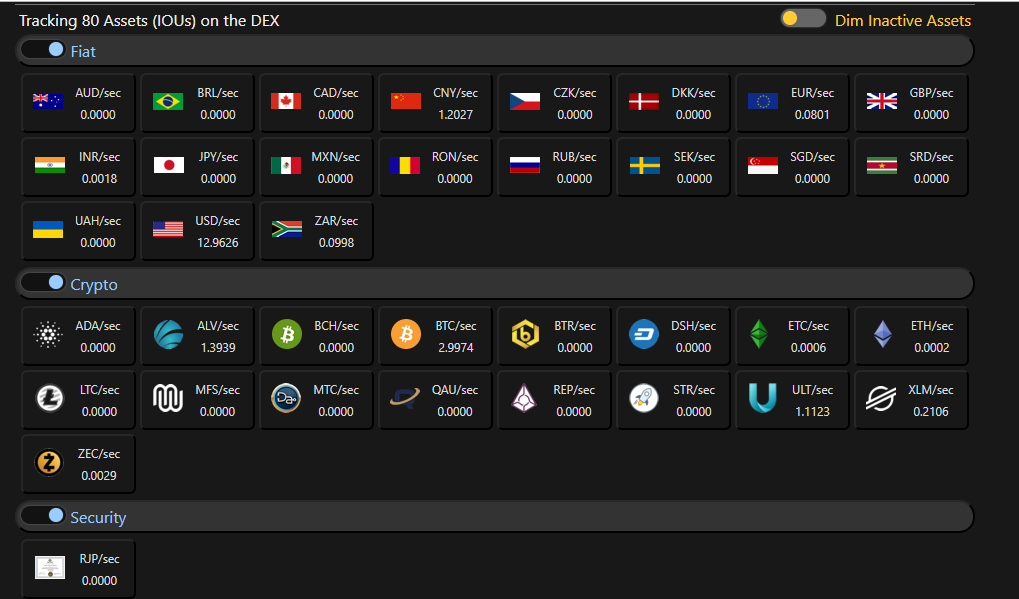 Among the assets monitored, also stable coins and commodities like gold are included (In case you didn't know, gold can be traded in the XRP Ledger). 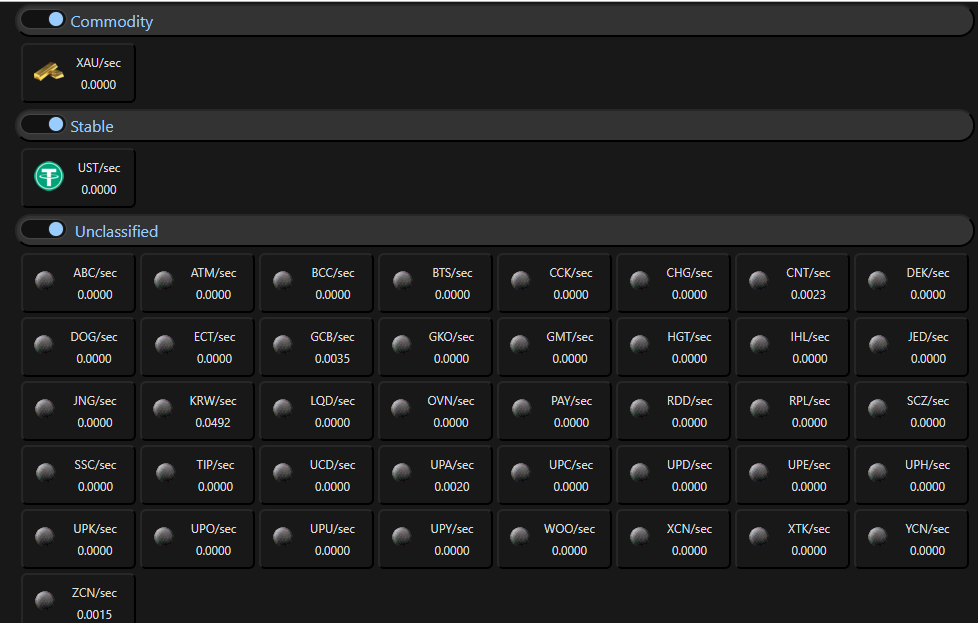 And at the bottom of this view, a live transaction stream showing the type of transaction, amount, timestamps and asset moved across the XRPL is shown:

In a chat with ZIGXRP, he has revealed that Velocity of Value was actually inspired by this picture tweeted by Dilip Rao where he was presenting at the Arab Regional Payments Systems Conference in Abu Dhabi, UAE earlier this year:

Presenting on behalf of @Ripple at Arab Regional Payments Systems Conference on 27/Mar in Abu Dhabi: #futureofpayments via @Interledger - "All payments will be micro-payments" pic.twitter.com/hM96yymkVL

“This to me spoke volumes on where we are heading. (After watching data progress bars most my adult life) Value streaming like data. Wanted to do my version of it for the DEX.” ZIGXRP expressed.

In the Live Transaction Rates feature, I was up for a very nice surprise! A comparison of transaction rates between BTC, ETH and XRP gathering the data from each blockchain and displayed over Dani Torres' famous Scalability Series artwork as the background! There is 0 doubt that Dani's artwork really took this visualization to the next level and ZIGXRP, its creator, also shared with XRPLORE a bit about how he came up with the idea:

“Another inspiration for me to create a visualization was the Ripple infographic that showed transaction rates:

$XRP sets the standard for scalability at 1,500 transactions per second. #XRPtheStandard #undisputed pic.twitter.com/gNihfiPZ3E

I thought it would be really cool to put live data to it, and I asked Dani Torres if I could use her artwork of the same inspiration as a backdrop. That was fun and more challenging to do than appears.....to take blocks of transactions and meter it out to a TPS value but I loved creating it.” 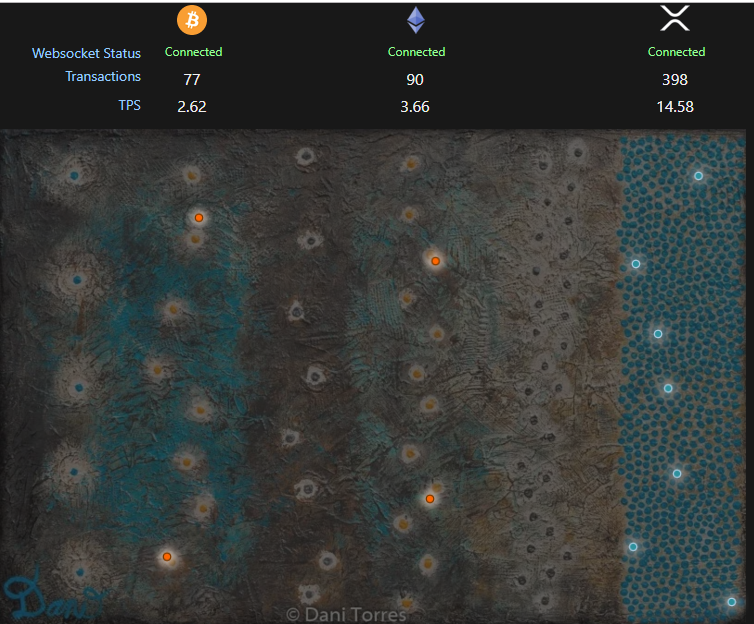 Widely covering validators' performance and offering unparalleled visualizations of the rate at which value moves through the XRP Ledger, XRPL Apps fits perfectly with the projects that have been covered so far in XRPLORE, as it also provides individuals and institutions with the right tools to gather information right from the XRP Ledger.

Although I wrote this post as comprehensive as possible, XRPL Apps is a widely interactive platform, and a written blog post will never really do it justice, so I really recommend you to explore it and click through the different views as you can obtain tons of charts and insight (for example, you can get charts for each of the assets in the Velocity of Value view).

And if you want to find out more details about ZIGXRP's work, I also recommend you to follow him right here in the Coil platform and to read his post {Coding on the XRPL – My First Experience;} where he describes more in detail what coding in the XRPL for the first time was like for him. 🧭