As documented by legal scholar Ian Haney López and others, the Democrats do not consistently use a narrative frame that effectively combines messaging about both race and class inequality, and how they overlap and reinforce one another. Democrats lack a simple, straightforward narrative — a big story to tell voters about what their party represents.

By comparison, the Republicans have a far more effective propaganda machine. They have branded themselves as “patriots” who love America and are “defending” it against those others — sometimes specifically named and identified, and sometimes not — who are not “real” Americans and are said to hate the country and its so-called traditions.

From Democrats must embrace the power they have to save democracy — or risk losing both – Alternet.org

Truths happen in reflection, community. They are nuanced and require and ability to change. That is part of what is hard here.

Disinformation at scale is violence

Frances Haugen, a former data scientist at Facebook, told members of a Senate subcommittee that her former employer bears some of the blame for the growing conflict in Ethiopia. More than once, Haugen accused Facebook's algorithms of “literally fanning ethnic violence” in Ethiopia.

Freelance journalist Zecharias Zelalem is one of the people attempting to document that story in real time. He reports extensively on Ethiopia and agrees with Haugen's assessment.

“Just looking at the instances of documented evidence over the course of the past three years in which prominent Facebook posters would post unverified, often inflammatory posts or rhetoric that would then go on to incite mob violence, ethnic clashes, crackdowns on independent press or outspoken voices,” Zelalem said.

In one recent instance, Zelalem saw an inflammatory Facebook post from a media outlet that falsely blamed members of an ethnic minority group for carrying out murders and kidnappings that took place on Sept. 27.

The post quickly got hundreds of shares and likes. A day later, on Sept. 28, Zelalem said the village cited in the post was ransacked, burnt to the ground and the inhabitants were murdered.

“Despite multiple efforts to report the post, it remains up and live as of this moment,” he said.

Trump’s lawyers proceeded in the impeachment trial with the same rhetorical technique Trump and his supporters use: they flat-out lied. Clearly, they were not trying to get at the truth but were instead trying to create sound bites for right-wing media, the same way Trump and the rest of his cabal convinced supporters of the big lie that he had won, rather than lost, the 2020 election. In that case, they lied consistently in front of the media, but could not make anything stick in a courtroom, where there are penalties for not telling the truth.

Misinformation is about structuring the lie, the fiction to be taken as true. When the people who are holding the mic are building a false narrative the goal can be to get pieces of a lie read into public record. So that it can be stitched together with other pieces and spread.

Regime change in the U.S. 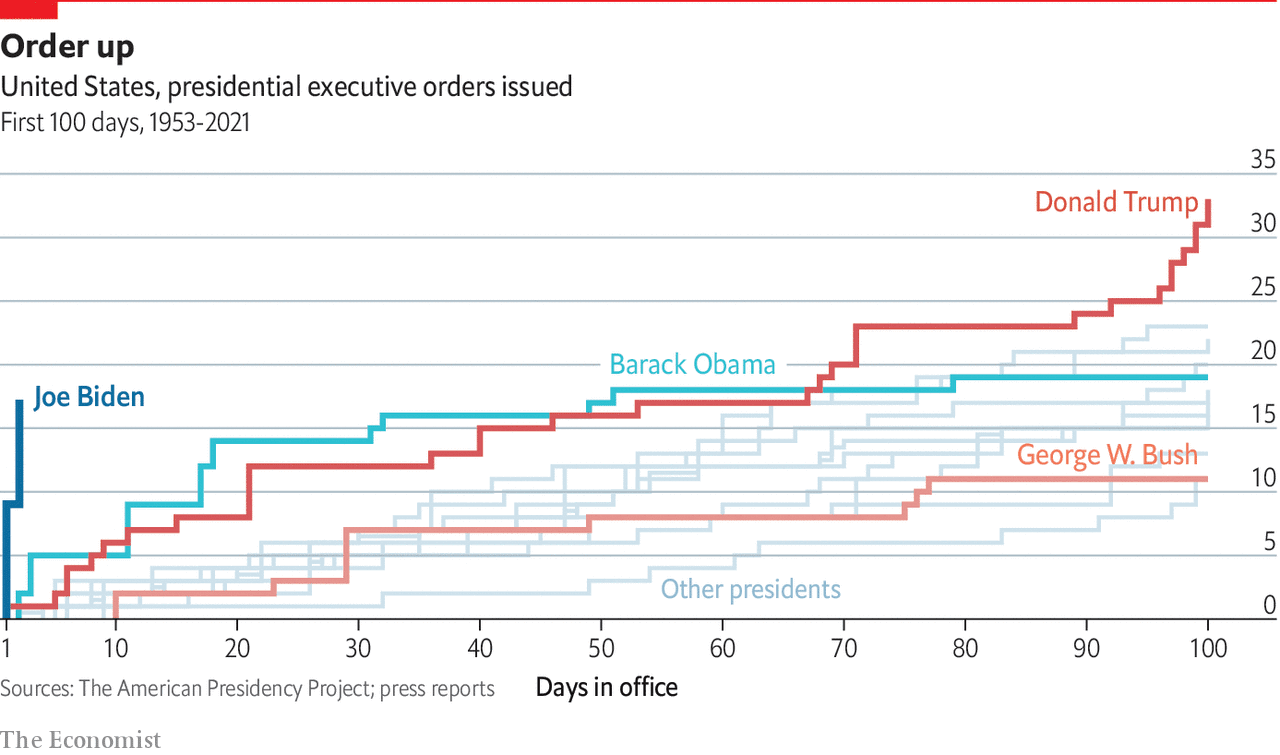 This chart is from The Economist shows the pace of Biden's ex cutive orders in the first two days of his administration. It's plotted against previous presidents to show the comparison. The swing at the end and beginning of these charts is interesting. It idicates, I think, that we may be heading towards bigger regime changes as we get more and more polarized.

It's not just the president welding his own. It's also the stalemating of Congress. The idea that becomes a venue to stop action or race through action (see Sepreme Court Justices).

I don't understand this well. It's a nugget I'm following.

Biden argued that foreign policy is an integral part of domestic policy. It requires that the government address the needs of ordinary Americans. “We will compete from a position of strength by building back better at home,” he said. “That’s why my administration has already taken the important step to live our domestic values at home — our democratic values at home.”

This idea—that the U.S. must reform its own society in order to extend the principles of democracy overseas– was precisely the argument Theodore Roosevelt and other reformers made in the late 1890s when they launched the Progressive Era. When Roosevelt became president in 1901, he used this rationale to take the government out of the hands of business interests and use it to protect ordinary Americans.

These folks are just Conservative Media Stars now, people who were throwing red meat online when suddenly it all got real and they were elected to Congress because that's all that Republican primary voters want anyway. Cawthorn's mandate is to engage in a theatrical battle with the various Enemies—Democrats and the Radical Left, the Fake News Media, Republicans who are deemed traitors to the cause—for the satisfaction of those people who have been told for 30 years that these groups are out to destroy The America You Know and Love.

It is not over.

While some right-wing Republicans have howled that Biden’s firing of burrowing Trump loyalists betrays his promise of “unity,” in fact the new administration’s quick restoration of a qualified, nonpartisan bureaucracy is an attempt to stabilize our democracy.

Democracy depends on a nonpartisan group of functionaries who are loyal not to a single strongman but to the state itself. Loyalty to the country, rather than to a single leader, means those bureaucrats follow the law and have an interest in protecting the government. It is the weight of that loyalty that managed to stop Trump from becoming a dictator—he was thwarted by what he called the “Deep State,” people who were loyal not to him but to America and our laws. That loyalty was bipartisan. For all that Trump railed that anyone who stood up to him was a Democrat, in fact many—Special Counsel Robert Mueller and Georgia Secretary of State Brad Raffensperger, for example—are Republicans.

Because beauracracy isn't necessarily a bad word. It can also be a stable a new regulating force.

From Are respectable white people scared enough by fascism yet? – Alternet.org view

Indeed, at some future point, we might look back at the 2020s the way we look back at the 1980s to see two eras reacting politically to respective previous eras, setting the tone for a generation each. The 1980s, under Ronald Reagan and George HW Bush, were a reaction to Black freedom and power. The 2020s, under Joe Biden and Kamala Harris might be, in the end, a reaction to radical right-wing collectivism. For now, we can only hope that’s the case.

What must we do to make this true?

These crises of democracy did not occur randomly. Rather, they developed in the presence of one or more of four specific threats: political polarization, conflict over who belongs in the political community, high and growing economic inequality, and excessive executive power. When those conditions are absent, democracy tends to flourish. When one or more of them are present, democracy is prone to decay.

Today, for the first time in its history, the United States faces all four threats at the same time. It is this unprecedented confluence—more than the rise to power of any particular leader—that lies behind the contemporary crisis of American democracy. The threats have grown deeply entrenched, and they will likely persist and wreak havoc for some time to come.

The situation is dire. To protect the republic, Americans must make strengthening democracy their top political priority, using it to guide the leaders they select, the agendas they support, and the activities they pursue.

The weak response of the Capitol Police to the insurrectionists yesterday highlighted the difference in police responses to Black Lives Matter protesters last summer, when officers under the control of the Executive Branch used tear gas and flash bangs to clear peaceful protesters from Lafayette Square so Trump could walk across it for a photo op, and to the right-wing rioters who invaded the Capitol. Although they were different law enforcement branches, and although then-Attorney General William Barr, who ordered the summer’s attack, is now gone, no one could miss that Black protesters could never in a million years have broken in the windows of the Capitol, invade, and wander around taking selfies before leaving without arrest.