KDE Plasma's theming system is actually quite complex. It has many ways to be customized. It's normal ever for expert users to not fully get how it works. I'll try to explain how it works to the best of my knowledge.

For all of these topics, there's section on the KDE Store where you can see all the avaiable options and download them.

Let's start with the Global Theme. This has potentially control over many settings, but let's simplify it into the main smaller components it determines:

When a global theme is set it can set all of these things, but it does not have to set all of them. This means that setting a Global Theme is actually a potentially “destructive” action, meaning that you might have to re-set your preferred App Style, Plasma Style, etc. if you had customized them. In fact, you can customize each one of the above elements to your liking!

This category lists the QStyles you have installed. These customize the appearance of the 'widgets' in your QT applications: buttons, frames, tabs, checkboxs, context menus, and so on. The QStyle covers QWidgets app natively, whilst we have a qcc2 theme that mimicks the QStyle for qml apps. In this KCM you can also customize the GTK theme for, err, GTK apps.

This is where Kvantum comes into play: it is a QStyle that reads from a SVG how to draw the various widgets. This makes it much simpler for Style creator to make a new style, as they only have to make in Inkscape the various components instead of writing C++; of course, it also limits what you can do with it (e.g.: it's impossible to customize animations). A distinction must then be drawn for “native” QStyles and the Kvantum styles. It is very rare to see an original QStyle, but they usually feel of “higher quality” compared to Kvantum ones.

Here's an example of a “native” QStyle, Lightly:

This one customized the look of Plasma: the panel, the task manager, the system tray icons, krunner, the app launcher, etc. Everything that's not a window is (usually) part of Plasma.

Similarly to Kvantum, Plasma themes are defined using SVGs. If you would like to know how to make one, I'm doing a guide on my youtube channel.

Here's an example of a Plasma Theme called ROUNDED. (That's the name, yeah.)

Here you can define the colorscheme of everything. Of course, it will be up to single components (App Style, Plasma Style, Titlebar) to decide whether to actually follow the coloscheme or now.

The coloscheme is one of the few components that the users can edit straight away. Just click on the edit icon of any existing coloscheme and KColorSchemeEditor will pop up. I've heard there might be a redesign of this dialog coming up!

This one customize the titlebar, which is the component with the app name and the minimize, maximize, close buttons. I'll admit I'm a bit more ignorant of how this one works: I think there are two types of decorations, one written in C++ and another mostly in QML through Auroræ. Again, the decoration can decide whether to follow the colorscheme or not.

In this KCM you can also decide how to customize the buttons in the titlebar: whether to keep the minimize button or ditch it, but also whether to have the App Menu as a button there, have a keep above button, a shade one, etc.

Here's an example of a third party decoration, FormaN:

This is where the various icons are customized. These are used both in apps and in Plasma; although the Plasma Theme can override some of them. In this KCM you can also customize the icon size in various places: toolbars, dialogs, the panel.

Icons are actually usually compatible with GTK and other DEs as well. However, there might be missing icons!

Again, this one is pretty intuitive. In this KCM you can also customize the size of the cursor.

Here you can customize the loading screen to use when you are logging in Plasma. You can actually choose to have no loading screen at all, but you will be displayed a Plasma that might not be ready (e.g.: Panel not shown yet).

These are written in QML. 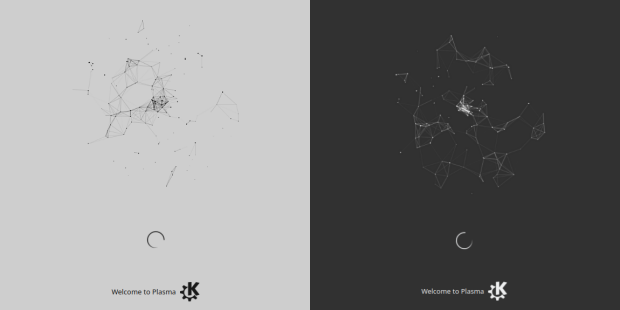 There are various “effects” that Kwin – the window manager – can provide to the user. These are usually graphical: animations, blur, transparency, etc. I cannot go over them all, but I'll say that you can find more of them on the store, such as the grayscale effect and a rubberband maximize animation. The default ones are mostly C++, but it's possible to also write QML ones.

These are scripts that can interact with your windows in various ways. A common exaple are tiling scripts, that arrange your windows for you. But there are many others: a shortcut to minimize and restore windows, forcing blur behind windows, grouping windows, etc. These can use the JS API.

Well, it's not like a static image is for everyone. A wallpaper can be many things: a slideshow, a vide. In general, these plugins define how wallpaper looks and behaves: some might blur it when a window is opened (highest rated one), some might use shaders for cool 3D animations, some tint the wallpaper based on the hour of the day.

Yes, there's a section on the KDE Store for these as well.

Well, yeah, it just doesn't stop here. However, other sections are less used and I'm not sure I remember them all. So I'll stop here! Hopefully I've made stuff a bit more clear. Also, I've only showed sections that you can customize with third party themes or plugins, but of course there are so many other things you can customize Plasma!

That's all, see you!

My name's Niccolò Venerandi, my website is here, you can contact me on Telegram as [at] veggero and you can support my work on KDE on liberapay, paypal or patreon.