My Tale of Vesperia

A piece on my personal journey playing the game Tales of Vesperia. A combination of a review, and a think piece on how I consume larger pieces of media. 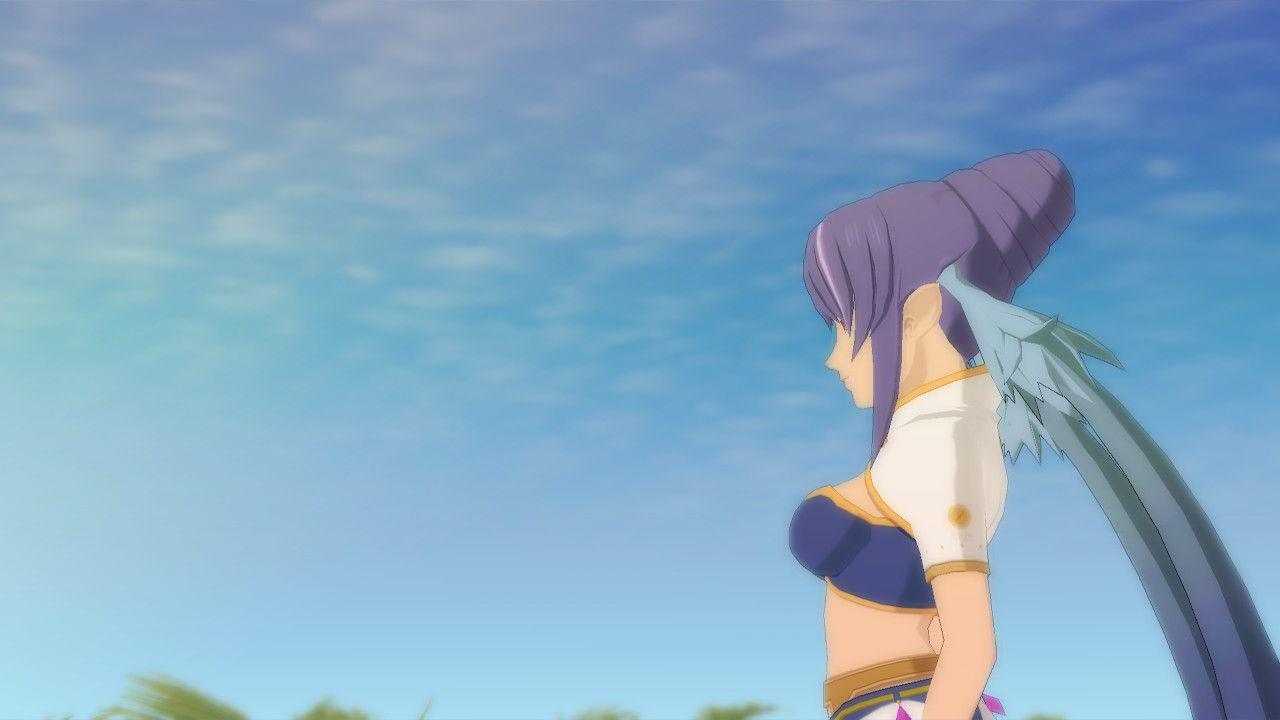 Tales of Vesperia was a unique experience for me. As someone who loves narrative based media, consuming it with consistency and solid, overarching understanding is tough (I blame the undiagnosed ADHD). I forget details and have a hard time following the content, stringing it together, or having a remotely solid understanding of the progress I've made. My attempts to hold a conversation about the current happenings in my games are usually unsuccessful, if not embarrassing. It rarely feels like I truly internalize the current narrative... and that takes away from how genuine my experience feels, along with the connection I create with the characters and world/environment. I honestly might be looking too deep into this, and maybe I am, but for some reason it feels like this causes my experience to feel... incomplete? disingenuous? hollow? I'm not sure what the best word is to describe it, but it's enough to write a piece about it apparently!

I feel like I took a few steps forward in my journey to change that with Vesperia. I made a conscious effort to try and retain the information given, albeit difficult in some cases because woooooo boy fantasy RPG names (to name a few: Antelexia, Wealand of Cados, Capour Nor/Torim... it's hard to keep track of). I'm not sure what it is about my inability to absorb this information but something about it is really disheartening as someone who likes to dive headfirst into fictional worlds. It's disappointing that I have to try so hard to follow and process what's happening – it feels like a physical effort. If I don't focus hard enough, I'm suddenly hitting the A/X button to fly through the dialogue until I find myself unsure of what to do next since I wasn't paying attention. 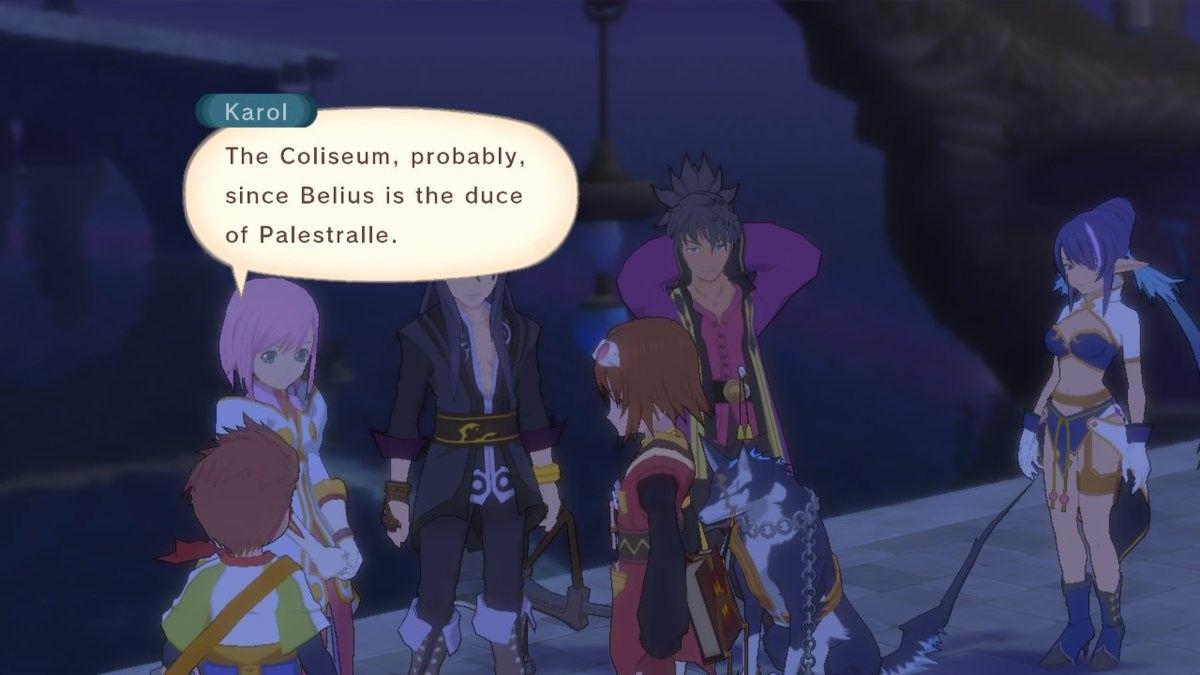 That was both a good and bad thing about Vesperia. With it being originally an Xbox 360 title that was ported to the newer consoles (the Switch was what I played it on), the map mechanics were minimal at best, with quest overview being nonexistent. There was no tracker or point of interest marked at any point, whether delving deep into the full world map or using the mini map. In the full world map, cities, dungeons, and general areas were marked, as well as your current location, but that was about it. With how linear the game treated itself, I can understand why this was the case but as the world opened up later on, paying close attention to the dialogue queues was important in order to know where the journey lead me next. On one hand, this was a nice change of pace – I was forced to make sure I was comprehending the current dialogue and story progression. No need to speed through the text just to see where the “yellow star” is marked next and be off. On the other hand, there were a few times after putting the game down that I was disoriented as to where I should go next; there was no easily accessible direction available. To counter this, I tried to save and leave myself in situations where it was very obvious that I needed to speak to a Specific Person, or transition into the next room in order to continue, however it was not always easy or convenient to do so. As a result I had to do a tiny bit of googling every so often. It was refreshing regardless, to have to rely on my own senses and resources to keep my story going, as opposed to just constantly locating the diamond marker or red flag and trudging off to the next piece of the arc.

As I mentioned previously, I decided to purchase and play Vesperia on the Switch as a change of scenery, although it is available on PS4, Xbox One, and their predecessors. I'm normally partial to playing longer RPGs (of any variety) on my Playstation as that was my main console for a very long time. I figured it might be a new experience to embark on the journey on Switch, since for a very long time I also associated my PS4 with my tendency to trophy hunt. That has been my downfall for a lot of games – getting consumed in the quest to get that Platinum Trophy. I would honestly try to attempt playing through the story on my own at least once before going on the hunt but that never lasted very long. I would sink into a paranoid hole of “what if I'm missing super easy trophies right now that will be so annoying to get back to later? or worse?? get locked out and missed completely???”. The idea of trapping myself out of simple trophies that would require a whole other playthrough was almost nauseating. This then resulted in me playing alongside a walkthrough, combing through its details and features, instead of combing through the game itself. This made it feel like I wasn't really experiencing the game through... well... the game. It felt more like a second thought after essentially reading what was about to happen in the walkthrough, and then experiencing it through the game. Starting this endeavor on the Switch helped combat that a lot since it has no trophy system implemented. To boot – Vesperia in itself has a very extensive and convoluted side quest system. Trophy hunting this game would have been a nightmare I'd definitely be defeated by, plastered to a walkthrough praying I didn't miss anything. 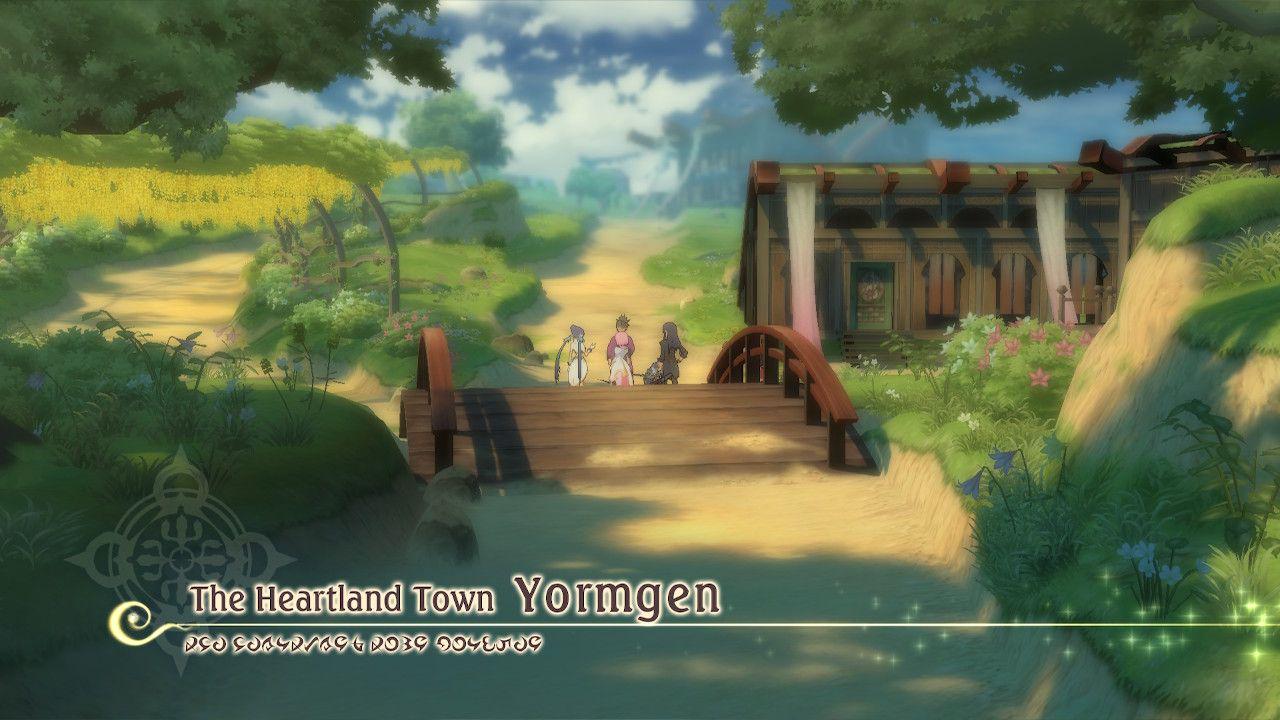 Between not having a quest log of any kind and being required to backtrack to areas that have no indicator what-so-ever, it is extremely easy to lose track of the side content, or even experience it at all. When being introduced to the character Judith, your collective weapons are confiscated because you're captured by the enemy army. When you break out and regain your equipment, Judith's staff is missing. She makes an off-handed comment about its importance and hopes to get it back, so I figured... is this something you can veritably do? So I googled it. And I actually laughed out loud. The convoluted voyage involved in acquiring this spear was absolutely insane. Evidently my best help was a Top Voted forum response on GameFAQs to someone ELSE asking how to even get it (link provided if you're curious – shorturl.at/bds58).

Another prime example was one I actually experienced. At one point I backtracked to the Lower Quarters in Zaphias to stock up on some supplies since I was running weirdly low, which was a bit out of the way from where I was supposed to be headed. In doing so I came across a completely obscure and out of the blue side quest which resulted in only one thing: learning that one of the main characters Rita, loves cats. That's it. That was the entire point of the side quest. I'm pretty sure I got no physical reward of any kind, be it items or money. She takes off to help rescue this cat that has run away, and you all but have to run after her to keep up. And honestly? I loved it! It was a fresh break in the narrative that was so cute and endearing. Learning more about the characters is always such a special experience and I'm all about those quiet, more intimate moments that help delve deeper into establishing the characters. 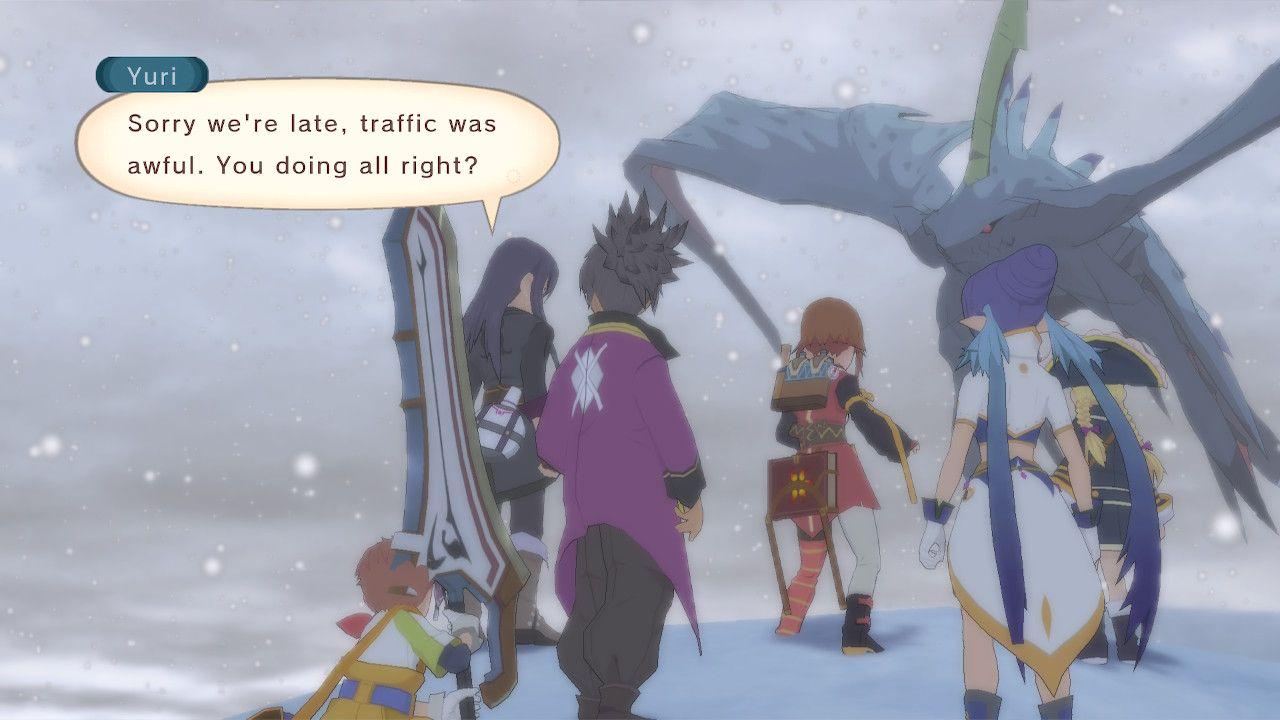 Getting back to it though, the Switch was the perfect vessel for this game for me. Something about the personal intimacy that handheld mode provided, in combination with the cinematic styling of playing on the TV screen, allowed me to tailor my present game-play however I liked, which I think inevitably helped me continue forward and actually beat it.

Overall, my experience with Vesperia was a delightful one, albeit slightly drawn out. It pulled that classic JRPG move of making you THINK that the current story arc is coming to an end, just to introduce you to another one entirely. This came as a surprise since in the past I've never had much success getting very deep in JRPGs but it was relieving none the less because well... I didn't want it to end. For the first time in a while, I was invested. I was in deep with the mismatched band of hooligans the story had brought together. Even without doing much of the side content, I had come to learn so much about each one, that I didn't want the journey to end. The connection I felt this time was different in a way too, it felt more... genuine? Like I wasn't just rolling credits on a good story and saying, “wow that was a great game”. I felt actual relief for the characters having saved their world gaining back the ability to live their lives. I felt privileged to see how much the characters had grown as individuals and how they had grown together after all the escapades the journey had thrown at them. This experience was the first of its kind for me in a very long while. I've definitely had experiences with other games like this before, but this was the first one in a while that felt this... deep, I guess the best word would be. 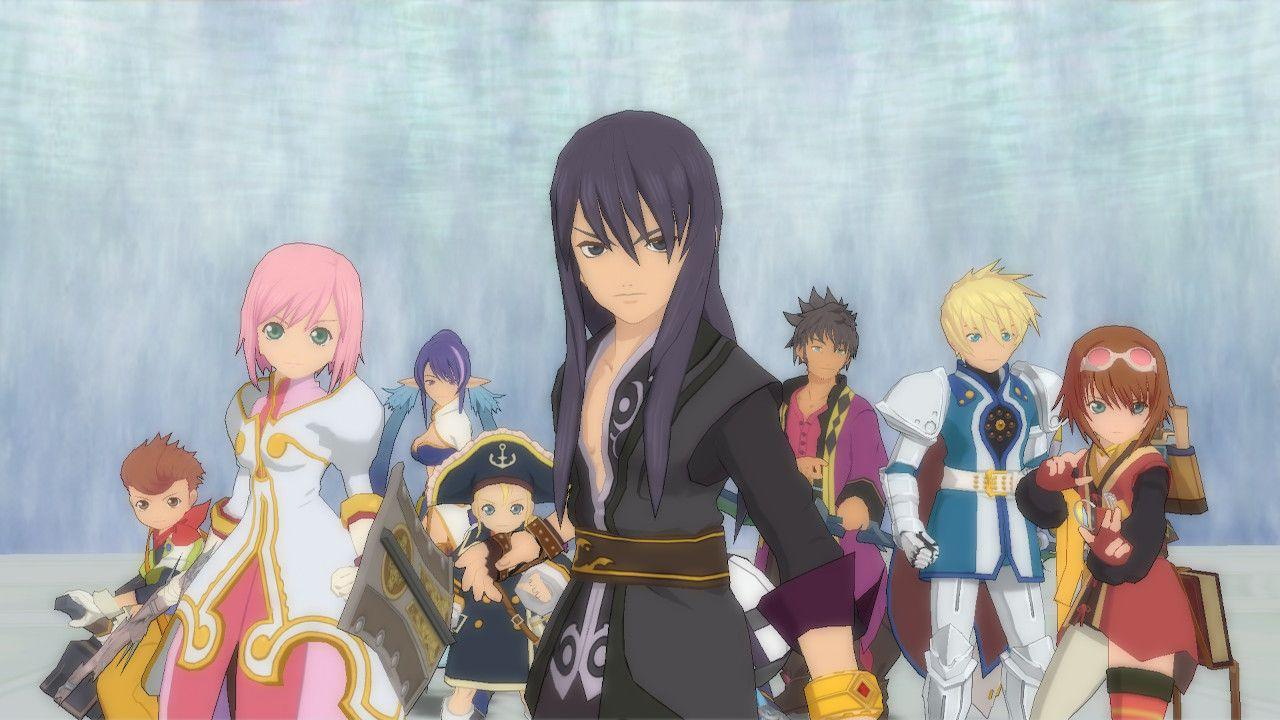 It's funny – this whole thing feels like a little experiment to me, and I guess in some ways it is. As I said in the beginning, if you've gotten this far – you can clearly see this is less of an actual review of the game, and more so a review of myself having played through it. I don't think I've ever sat down and really analyzed how I consume my media, and in doing so with Vesperia, it helped me be almost self aware and aided in fully encapsulating the story experience. Again, maybe I'm thinking too deep into it, and I should just say I played the god damn game... but where's the fun in that!?