The “Tech Worker” and its limits: identity, tactics and memes 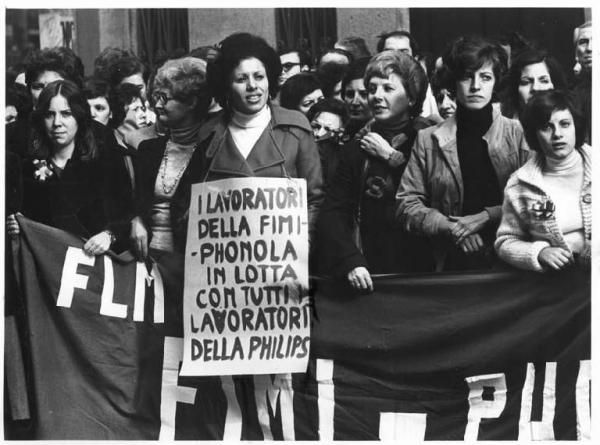 Strike of the Tech Sector in Milan, Italy, 1977. Detail of workers from Fimi-Phonola

In the USA, tech workers organizing in the last few years revolved around, among other things, building a shared worker identity across different roles that contribute to the creation of digital technology. The project is to bring together technical white-collar jobs in IT (programmers, designers, ...), the blue-collar jobs that support the technological production (service workers, cleaners, ...) or that enable some specific scenarios (warehouse workers, riders, drivers, ...).

This is the strategy adopted for example by Tech Workers Coalition, an organization I'm part of. For TWC, the “Tech Worker” is an identity that must cross the boundary lines created by difference in material conditions. TWC strives to bring together people across these lines on the basis that they can impact together the same industry by mobilizing, leading to synergies that will benefit both.

This perspective is not exclusive to TWC: other organizations seem to align on the same premise, either explicitly or implicitly. Some do this simply by disregarding or overlooking the differences between privileged office workers and other categories.

The limits of this approach are masterfully analyzed by “Carmen Molinari” in this article that was published a few weeks ago: There is something missing from tech worker organizing. It triggered more than a few reactions and verbalized something that was already evident to many: most of these initiatives and organizations are still mostly white, mostly male, mostly meaningful to privileged workers. Molinari highlights how guilt-driven or issue-driven organizing are good to involve already politicized white-collar workers but fail to reach people outside certain bubbles. In the end of her piece, she calls for building worker power in the company among technical people, since they hold a lot of technical control over digital systems. Only then they can use their material power to help other workers. She assumes that there are enough grievances among technical workers that can find sameness in their experiences and roles and this shared sentiment is enough to build solidarity.

This article pushed me to share my own thoughts on the concept of “Tech Worker” as a cultural artifact and how it is used today in media and in organizing. I’m a member of TWC Berlin and TWC Italia and as such, my perspective is distant from what is happening in the USA, although I regularly exchange ideas with my peers on the other side of the ocean.

Let's start from some shared experiences: as an identity, the “Tech Worker”, is great for mobilizing technical workers. In the ideological and cultural void left by the withdrawal of the Californian Ideology, the idea that programmers and designers are workers and need to fight together to build better working conditions and better technology is taking root and growing very fast. This phenomenon is better explained by Ben Tarnoff in The Making of the Tech Worker Movement.

At the same time, this identity fails to capture, in most cases, the interest and desires of many people in the industry. Despite the intents of tech workers organizations, most people still see programmers as evil or simply too privileged to be engaged with. The immigrant service worker fails to find sameness in an enthusiastic white boy with a passion for slow drip coffee. Words about workers solidarity pronounced by an alien fall short even among those who have the tools to understand them.

The narrative of the programmer's exceptionalism that has been cultivated for decades creates enormous friction in the communication with people outside the techie bubble. The news, the movies, the business moguls say that programmers can wield magic; they are shaping our present and future; theirs is somehow a new form of labor. Therefore most people think: they are weird, sometimes childish, but special and gifted and they are granted a huge deal of privilege in exchange. If they suffer, it is from a position of economic and social privilege. They don't suffer like me; they don't have my earthly problems.

Fighting this narrative is imperative for many reasons but at the moment it's still dominant – we need to learn to work around it, either by concealing our position as software workers or by learning to cooperate with people that are in other positions. Missing a common ground and a shared vocabulary, dialogue is not possible across these differentiating narratives about our roles and positions as workers. The best option is then to use diplomacy, intended as the language for when all the other languages are not possible. Let's engage other organizations of workers treating them as Others until they can recognize us as Same. Forcing a shared identity, designed by us and alien to them, won't work for obvious reasons. Until such shared identity is possible or until it emerges by itself in new forms, solidarity will be more easily built on the mutual material benefits that can derive from it.

Is this then an argument against the broader conceptualization of the Tech Worker as such? Quite the contrary. Instead of ditching the whole framework or storing it in a closet waiting for better times, we should instead focus on what it seems to be doing well: reaching workers directly involved in the creation and maintenance of software.

For lack of a better word, I will call it the “Tech Worker” meme in order to distinguish it from the “Tech Worker” identity. The “Tech Worker” meme is the core tool of an asymmetrical communication strategy. In such a strategy unions and alt-labor organizations engage the software creators portraying them as part of a broader supply chain of cognitive and material work. At the same time they abstain from engaging other workers in the same way, instead mediating between the existing narratives and the construction of solidarity across boundaries.

The “Tech Worker” meme exists in a confined space for strategic purposes and has no meaning outside that space. The meme is used to rile up developers when you try to unionize or when designing a flyer for a protest in a tech campus, but it has no meaning when you engage the riders of Deliveroo or the drivers of Uber, that are entitled to their own identity. We believe in the “Tech Worker” meme until we don't believe in it anymore. This clearly requires a certain ability to handle contradictory beliefs that most organizations on the left struggle to achieve. It's a prerequisite necessary to employ such strategies but how to get there is out of scope for this brief article.

Again, let's go back to what we can observe on the ground to explain why the “Tech Worker” meme seems to be working. There are many distinct patterns that can be observed in workers being exposed to this proposed new identity. I will list a few that come from my organizing experiences, but I'm sure that people from other parts of the world could easily expand it further.

First, as we said before, it fills the void of meaning and identity that exists in the IT sector. The energy behind the Californian Ideology is running out. We are seeing the breakdown of the homogeneous cultural space in which every open space, from the big consultancies of Bangalore to the FinTech startups of London, are just appendages of the Silicon Valley. This tale is being torn apart by the inability of Californian tech to deliver the wealth and wellbeing that it promised, together with the increasing inequalities inside the IT sector that naturally came with the expansion of the sector and the accumulation of the Digital Capital. In this space, the betrayal of the Californian Ideology lays the ground for the growth of new identities and ideologies.

The “Tech Worker” meme works perfectly because it is able to explain the different material conditions across different roles, locations and backgrounds, something that overlooked or treated as a local anomaly in the past.

It also overcomes the strictly individualist and machista mindset of the past, in which every programmer is a super-human cooperating with other peers to create majestic artifacts with their intellect. This enables the tech workers that were “undignified” in the old world to come up and take their credit for building technology. In the past, those who didn't fit in the narrative of software creation as a hyper-competitive endeavour of extremely skilled and exceptional developers and designers had very few tools to narrate themselves or to challenge the egocentric perspective of self-absorbed, traumatized “top performers”. This shift has been happening for a long time under the pressure of companies that want to tone down individual competition in order to maximize productivity. New value is given to cooperation, empathy, horizontality and diversity by organizational theory and a changing industry culture: this value is being appropriated by the alt-labor galaxy and used as a gateway drug to more radical ideas that compose the motivations of the Tech Worker: workplace democracy, equality, ethical technology and so on and so forth.

These new motivations, ambitious and sometimes utopic social and technical goals to work towards, capture the enthusiasm of young tech workers in a deep and visceral way. The old superhomistic will to power is transformed into the will to give back from our privileged position of technology creators. While this can easily lead to toxic patterns of armchair redesign of society and techno-solutionism applied to social issues (in the way hacker culture does), it still mobilizes forms of energy that were always used to harm the collective. Funneling this newfound resources towards positive and impactful results will be key to fuel the Tech Worker identity and make it grow: we cannot afford the failure of the FOSS or the hacker movement and a withdrawal in niche forms of resistance are to be avoided. Those spaces are already overcrowded, both in the political and the technical space.

Another excellent element of the Tech Worker meme is its appeal to the exceptionalism of the IT sector: the Digital Capital is growing and eating the others, technology is reshaping the world, therefore the workers that participate in the process must be special too. A dangerous thinking that should be slowly deconstructed, but that forces most organizations to adopt a different aesthetic, different rituals and different vocabularies from existing workers movements. The inability, again, to hold conflict beliefs holds up many organizations throughout the world: rebranding labor to appeal to new workers and new generations is always constrained by the need to signal sameness to other leftist labor organizations. The result is the inability to overcome the prejudice and resistance against left-wing ideals, against activism and against unions. The disregard for traditions and established practices that characterizes the IT sector usually leads to a lot of harm, wheel reinvention and self-celebration, but in this case it also enables a kind of ambiguity that ultimately drags lot of non-politicized people without any experience in activism towards our organizations. In this regard, the role of alt-labor organizations becomes to bridge the communication gap between big organizations that cannot abandon their past and new workers that crave forms of belonging and mutual support but are hostile to the old rituals and forms of the Left.

This brief article was mostly a dump of the reflections I've done since I started participating in labor organizing and I hope they can help my peers to better navigate their daily experiences in this role and to develop better tactical tools to reach tech workers. The discourse is often too focused on strategic thinking and materialistic analysis and I wanted to integrate the abundant material on the tension between the interest of IT workers and other workers. I don't believe there can be a simple, elegant resolution of this tension in the short term, but we should still be able to conduct effective organizing even in a condition of contradiction.