Dating is a dirty word.

Dear single moms out there – I salute you (using AC/DC song verses is a passion of mine – true story). Real talk – this shit is not easy. It's why cannabis exists. It doesn't make you a bad parent. Most likely, the opposite. Let's face it, data science doesn't lie (arguably). You're better off using cannabis versus cocaine on the weekend (not passing an ounce of judgment – please – rip lines if that's your thing). Since the onset of the pandemic, cannabis use has also increased amongst parents. Statistically, and A LOT. It just so happens to be my rec drug of choice, and something I can speak to endlessly.

Frankly, I know I had way better time at my daughter's class get together after a vaping sesh. Let's face it, being one of four (at most – no joke) single parents in a class of 20 is, well, awkward. You're the proverbial elephant in the room. Ugh. For the single dads – yes, you also have my undying support on that. Did the vape sesh make me care a little less – M'hm. Did it make me laugh a whole lot more – M'hm. Think I'm on to something....

Which leads me to: dating. Ew. Funny – everyone thinks the single parents in the classroom need a special meet-n-greet. “Zoe's dad is single, isn't he soooo cute..?!”. Uhm, dude, you're killing my buzz. I mean, sure. He's cute. His daughter is also in my daughter's class. I see Zoe's mom at the gym (and Starbuck's, for fuck's sake). She's really not over the divorce (as it just happened). For the record – neither is he. No, no. This is a disaster waiting to happen. I do NOT need to ride that crazy train.

PUCKERMOB is legit hilarious for good, unfiltered writing. Tanya Simpson recently killed it with her contribution, ‘I'm done with dating’. This gem of an article began with an epic photo stating, “Love is like a fart. If you have to force it, it's probably SHIT....”. I have no idea who coined that one, but I may love you. She goes on to state that her dating adventures have been well documented. Her description of “The Cyclist” is good for a real laugh. Article link (you know you want to): https://www.puckermob.com/moblog/im-done-with-dating/

Single parents (mums and dads) – you know you have a description tucked under your belt (or, two). True to Tanya Simpson style/spirit, I thought I'd throw a few out there. I relish anonymity – names shall be omitted. Just for shits, though – if one of these happens to sound like you, just be happy that I've omitted your personal information (at the very least). Because, yeah, some women may not. If you're a non-believer, check out the Instagram/TikTok/Twitter sites that bash bad dates. Yikes. Ouch. Burn.

“The Trust Fund Guy”. Please, don't date. You're not mature enough. The fact that you're in your late 40's and living off inheritance money does not entitle you to be a cheap asshole. Cold, hard facts: you chose to quit working at mid-40-something. Not because you worked all that hard. You suddenly inherited a shit-ton of money, and threw the towel in. Unlike, say, someone who earned that money and decided to retire (and, live off the interest). Anyway, sure you do need to budget yourself. This does NOT mean you get to ask the women you date to split every-single-bill when you go out (see what I did there). Oh, and bragging about your cheapskate/petty ways really isn't attractive. Also, the hidden (quite pornographic) Tumblr account: Ted Bundy-level creepy (oh, yes – I am aware – Google tells all). Please, re-read the part where I ask you not to date. I beg you. On behalf of all single women who may encounter you. Lurking. Somewhere.

“The Self-Appointed Important Guy”. Like “ The Trust Fund Guy”, you probably shouldn't date. Although, you may be slightly more adult. I said slightly, dude. Chill. You look great on a dating app (posed with your kids-play on, player). However, you may want to be a tad more transparent about your real relationship status. Look, being separated is not the same as being divorced. For the record, living in separate homes without having legitimate, legal documents filed in court gives that statement even more merit. Dude, you are married. But – you're the VP of Sales for XYZ Fortune 500 Company. Despite your act, some of us catch on. Quickly. We may not have your job title, your Lexus, your McMansion (all 10,000 square feet), or your boat (an additional 10,000 square feet – WTHF). We have a bullshit filter. We also have common sense. No, you’re not meeting up with us because you’re on a business trip. You’re dressed as if you’re hitting up da club – did I mention pathetic. If you cannot properly file for a divorce/separation/annulment/gett, stay OFF dating sites (and cut the shit). It's really, honestly pathetic. Side note (on my end), you at least get some points – you didn't make me split the dinner bill with you. Grazi! Now, bye-bye! Be thankful I’m not the one who (eventually) will report to your wife about this. Your day of reckoning will come, though. And – karma is a special, insidious kind of bitch.

My contribution, single folks. Because, I am stoned. Because, I can be. Because, being single allows me to make the most of my time with my daughter, extended family, and close friends. I get to foster the relationships that truly matter. 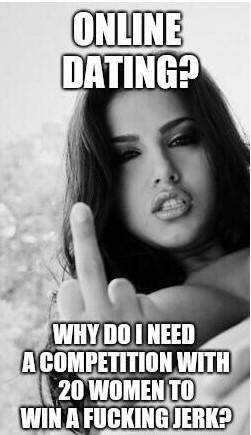 Alas, in my (rare) free moments, I don’t have to explain myself (another bonus to being single). There is something orgasmic/liberating/fucking amazing about that.

“You can't hoard fun. It has no shelf life.” ~ Hunter S. Thompson