Hi, I'm @talisein, and Mikumiku Dance on Discord. I am lucky and privileged to be a backer of the Miku Expo Online Kickstarter at the Producer Pack Deluxe tier. The opportunity to select a song for the concert was irresistible for me, and although I had a particular song in mind I wanted to reach out to the broader community for suggestions. I asked for suggestions on Twitter, and on Discord I opened a Google form survey. This document captures my brief take on the submissions.

I hope this article can serve as a resource that captures some of the recent hottest Cryptoloid songs. Each song here has impacted someone deeply, and they are all wonderful songs that certainly deserve a highlight.

I have collected all the songs with an official Youtube channel in this playlist. Some songs are not available from a producer's channel, and instead have links below to Soundcloud or Nico.

On Discord, I created a Google Form survey to collect some info on what types of songs fans are interested in hearing about. Here are some highlights: 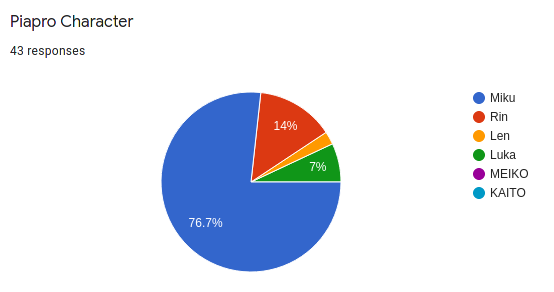 Miku taking ¾ of the submissions, its expected but also interesting its somewhat close to the composition of the average Crypton concert.

For me, this is the most important question! I want the song I select to make an impact. While ballads are touching and important to the overall structure of concerts, it seems the majority of respondents are also thinking of these types of songs.

What's interesting here is that nearly every suggestion is unique. The Vocaloid scene has incredible diversity in producers, and the fans are just as diverse.

The modal outcome here shows there is desire to see as-yet unrecognized producers featured in concerts, but there is still demand for the more established producers as well.

Novelity is certainly in the eye of the beholder, but nearly everyone wants a fresh sound.

At live concerts there is often a lot of jostling and maneuvering for a clear view of the projection. The choreography is recognized and appreciated, but it is not of top-level importance for setlist consideration.

For live concerts, Miku is backed by a live band, and the songs are often re-arranged to make use of them. I think this result shows that fans in fact prefer the band to be used, whereas the songs played when the band are taking a break are less anticipated.

What makes a song better for an online concert vs a live concert? To me, the premise of the song would matter, e.g. Digital Girl or MMORPG Addict's Anthem are more fitting than, say, Relationship Scramble. I can't be sure what the respondents thought of this question, but the majority do want a song that fits the venue.

Personally my “singing along” is pretty much limited to chants like Bless Your Breath's 'Hello Hello Hello!” But people seem to appreciate this aspect of songs in concert.

The first 6 songs were suggested by macaronzombie. Its a lot of songs from one person, but they all have different genres and are really quite excellent so I won't skip over any!

Youtube A flapper piece sung by Miku regardless of the yellow haired joker boy in the graphic. Recently there's be a run of these flapper songs, but this one is well done, I like the electric synth piano solo.

Youtube This song doesn't have many views but I think its great—hip hop I guess?—its just the kind of recommendation I was hoping to get.

Youtube This song melds future synth with heavier section with a driving bass. Its perhaps a little longer than it needs to be, but you should listen to it.

Youtube This is kinda a dark EDM, I'd definitely be bopping in the club if it got played.

Youtube Wow! This Rin song takes off from the start and I'm a happy captive audience.

Youtube This is a fun song that's split between a pure pop melody and a more grungy hardcore section.

Sing With You by Izzy Vitelli

Youtube The moment this song was published I've been looking forward to hearing it live.

Utsu-P was recommended by a number of people. This heavy metal piece has an tranquil bridge that leads to a good section of Miku's voice. There is no official link for this song.

Youtube Ayase has a lot of groovy songs that deserve attention, and this is a great example.

Youtube Maubox has been producing Spanish songs from the early days. This song is a fine example of their talent.

Youtube Maubox can also produce funky EDM songs in English too! The plot of this song is fun and clever.

Youtube This is a great song with a funky beat, I can listen to it all year long instead of just Halloween.

Youtube One hell of a strong Meiko song!!! From the same series as Dr.Funk=Beat, it blew my socks off.

Falling by MINO U

Youtube A beautiful song with a driving beat paired with an ethereal animated dreamscape, this song is a true treasure.

Youtube When Miku Expo Online was announced, I saw Digital Girl brought up more than any other song. Its certainly apropos to an online-only concert. In following months we've found out that Kira was commissioned to produce Highlight.

Youtube A dark jazzy song I hadn't heard before, but its going to be on my playlist now.

Youtube Released just 3 months ago, this song has a good bop. I admit its been a mainstay on my playlist lately.

Niconico A classic Powapowa-P from 2013.

Youtube YY is wonderful Miku hiphop, and was relatively quickly recognized by being played at Magical Mirai 2020.

Youtube Yeah its definitely disco! It has a wonderful groove but is also pretty chill.

Youtube I think this is the first Luka submission, and almost the oldest song submitted; Blackjack was released in 2010.

Youtube Neru was certain to be suggested by someone. This Len solo has a great beat and would be pretty fun live. Let's get twisted!

Youtube With a driving EDM behind her, Miku's voice is soaring into the future.

Youtube The Magical Mirai 2020 Song Contest runner-up really is a great song; I can listen to it every day. In some songs like this, Miku's pure voice really resonates with me.

Youtube Released in 2009, I was surprised to realize it hadn't been played live before. Talking about Miku's pure voice, this song is just the sort of thing that hooked me back then.

Youtube This hard rocking Luka song has some wonderful contrasts and captured my interest through the whole song.

Youtube This one strikes me a little differently from other Hachioji-P songs. The big brass bass sections make me want to start hopping in a club.

Soundcloud This Miku rap is well done but I'm laughing. Check out the MV on Niconico

This Crazy Wonderful World is For Me by n.k

Youtube This kind of an anthem song would be fun live.

Please Wait A Moment And Try Again by shr

CALL ME CALL ME by Robo

The World Hasn’t Even Started Yet by PinocchioP

Unite As One by Hachioji-P

Youtube This has been on my playlist for years and its going to stay there.

Youtube This classic from 2011 is one of everybody's favorites right?

Youtube If you ask people what Miku songs they want to hear, you're going to get some wowaka responses no matter what.

Youtube This Rin song goes metal halfway through, but in the end you can still a cute Rin.

Youtube A peppy song that explores the higher range of Miku's pitch.

Niconico This popular song has a bunch of independently produced 3D movies.

Youtube A relaxing ballad that still has a ton of energy.

Trash and Trash! by KurageP

Youtube I won't be throwing this Rin song out.

Forgive Me Not by Okame-P

Youtube I will certainly keep listening to Miku's voice.

Youtube I've been listening to Ochatime more than YY lately, so whoever submitted this is on my wavelength.

i DO what i WANT by Kira

Youtube To be honest, before Kira got contracted for Highlight I had convinced myself to submit this.

Youtube Luka's voice is coming out strongly in this metal song.

I'd like to thank absolutely everybody who suggested a song. I've spent hours listening through these submissions and every song was fresh and a welcome treat. I think the resulting playlist is really special! I need to select 5 songs to submit to CFM, who will choose one. I have 2 personal picks, and I will include 1 from Twitter and 2 from the Discord submission sets.