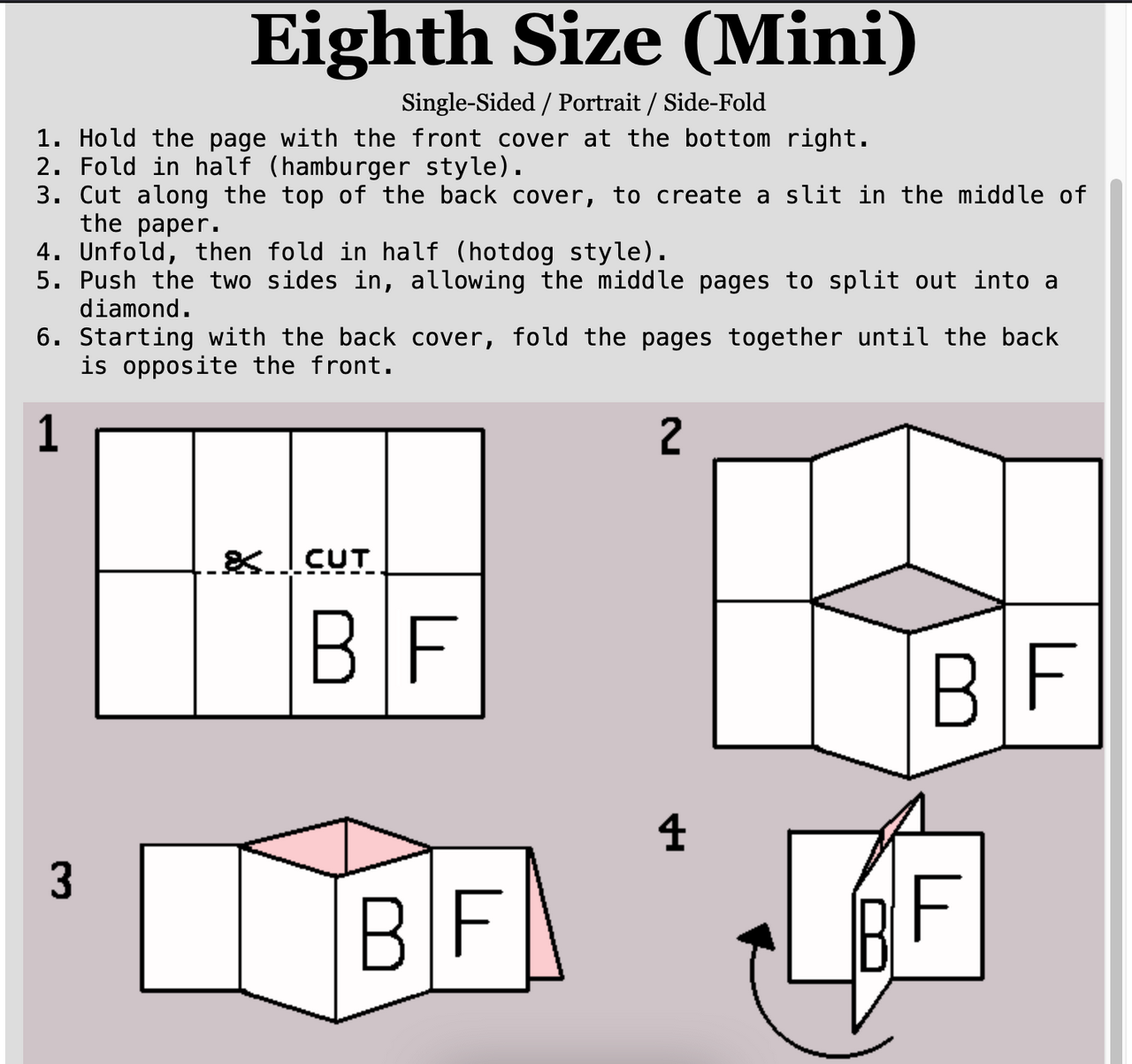 Zine folding credits via TheZineArranger software provided by Nash High on itch.io, as well as his credits within to Rowan Merewood

After an arduous hour of formatting (“work”?), I was able to reformat Issue 1 of The Zine Around The Corner. The original “og” issue is still up on write.as/tmo/zine, but the newly reformatted issue I sent off to around a dozen Internet (“stranger”) friends, so they can have first perusal. Nice folks, all of them, and I hope they enjoy it.

Issues 1-9 are difficult to read, because it's just mad text put in badly separated stories, but the NEW format has a clear Index, and everything starts at the top of a new page, has a proper intro/outro, like one would expect a zine to have! :)

Formatting was difficult. I opened the PDF version of the original zine, Copied the text (one paragraph at a time), and pasted into the new Google Docs doc. Then, I had to be sure that everything was set to the correct font/font size (IBM Plex Mono set at 14). Then, I had to re-format those paragraphs, because G Docs likes to take, say, 8 sentences and turn them from one paragraph into 2 to 3 smaller paragraphs.

That was the most time-consuming part, I'd say. I used screenshots of the old (PDF) photos within to upload to the newly formatted version. Index was easy.

So, this looks nice now.

I will reformat issues 2-9 eventually.

The newly reformatted issue will be on the /zine page in time, but I was friends to read it, give feedback before then :)

Made me think of a whole different medium/paradigm of zine-ing: e-mail centric zines. Like, “e-zines” or “perzines”, but never distributed online. No websites for it/them. And never in an actual e-mail in regards to inline content – just PDF docs (or/and .ePub, .mobi, etc.)

Just a thing I was thinking

No “spying” that way, I guess. I mean, I guess a savvy enough person could?

The song Forever Young is now stuck in my head. Ugh!

I tried so hard to get that tune removed from my head, and now it returns

what to say about what what

defaulting, again, to the write-to-think category of...things, I correspond aloud about Heavy metal

I returned home to think “I want to hear Classic Metal”, such as AC/DC, Iron Maiden, even Judas Priest, and I ended up with Iron Maiden Somewhere In Time, and then Bathory's first album. A few songs, not all through.

Coffee is being had, too

word slingin' on a blog for fun and games

Slow day in blogland this morning. Saturday. Day Off™ for nearly everyone. It feels like it has been Saturday for a week.

No approval (yet) on ooh.directory for this blog, it'll happen, I assume

No quips or quirks for sxxx (“sxxx” being the world), that that the world is that, but, it's how I talk

The pandemic is over, now? I guess? Monkeypox is a threat, now, instead? I hope it isn't as bad as COVID was (sorta is). Delta Variant nearly ended me in 2021, but luckily it was a three week ordeal, unlike the side effects from my last med which was a three month ordeal. Horrid months, indeed.

I was sick before, in 2019. Fatty Liver Disease, borderline diabetes, bad (shortness of) breath, hyperventilating when checking the mail in high heat. Humidity intolerance. General misery.

Started hiking/walking/resistance banding in 2019, and onward.

8:00 AM, and I relieved air pressure from my apartment by opening a window, and letting in cool air, which was previously recycled central heat – that is what caused the head pressure.

Then, a shower. Then, coffee. Soon, visiting Neighbor S.

The pad is for that – sleep. The mattress topper hurts my neck, as do all mattresses, so I am done with them (for now). I will use a Thermarest on the carpet + blankets, etc., and that will work. Floor sleeping always works, 100%.

The air outside is a cloud. Fog all over.

a little more jot jibbles for the evening at hand

Thinking about tons of stuff:

How “Little Alec” in A Clockwork Orange was a character that epitomized violence – not a violent character, just a being of ruthless bloodlust at every turn

About how an old friend, once “T” now “G” (after transition) popped up online recently, from an old blog I see on Tumblr, and she's going full steam on streaming and trying to be some post-social-media influencer in the videogame world. All the best.

About me, myself, and I, and how things are going (ok).

(not the length of timber)

Does anyone “promote” their blog/log anymore? I don't, and I don't think I will, but I am curious if people have “a thing” they do to promote their blogs?

I don't think I even did that in the Notorious News days (the “pro” blogging). I mean, sharing links, recommended links, daily links – there were “cliques”/networks, and that was super fun (albeit very professional, and dependent on PageRank, traffic, CPM, etc.), and all that brought in traffic, and I sort of feel that that is all that is missing from a blog era 2.0™ from occurring online, again. Collaboration.

If there were to be “a blog to be seen”, it would have to be by word-of-mouth from other bloggers, I'd imagine. I'd like to put together a group of regular writers to link back to, and get links from, but I am not sure many would partake.

It was more beneficial when ads were involved (which is how/why I started blogging in '06). But promotion, reach, shared traffic, etc., those things started to have less weight when no money was involved (like now, and like it was when blogging started).

My head feels like it is going to explode. Or, my nasal cavity, going to my ears feels like I have an oxygen tabk within.