Responding to this response from Inquiry (response below): 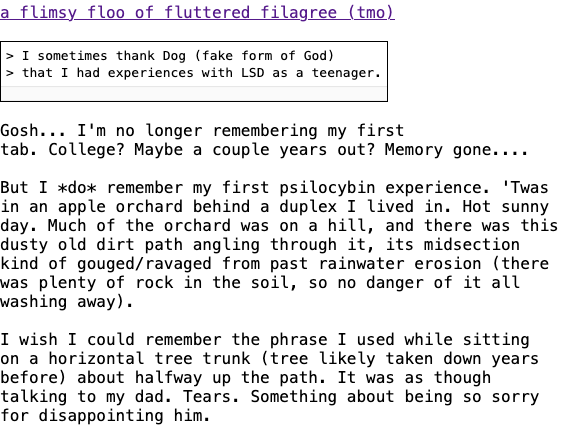 ...indeed, I was still in the “burn parents will/desire” to the ground phase of teenager-dom when I was taking LSD. I didn't feel a disappointment in any way, because if I had been deemed as such, it would have been a by-proxy way of me saying “fxxx you” to their real-time lag parenting. In adulthood, one has to put things to their own name – alas.

I did ok when I was 24. Got my first apartment, and felt IN SYNC for the first time with myself and the world since I was 16. It was that age that I was booted from my house for the first time, and I grew up more in a week than I did in the eight years following. When I was 24, I was like, “ah, as it SHOULD be”.

Things are up and down since then, but as are all minds and psyches, I suppose.

And, Ithaka keeps making an appearance on your bloggo, I see. It'd be cool to see more people reply to you (Inquiry) via inline blog posts. Hell, make Read.write.as the comment section for Inquiry's Gemlog.

The goofy things we do ;)

a flimsy floo of fluttered filagree

I sometimes thank Dog (fake form of God) that I had experiences with LSD as a teenager. As pent up and distraught as I was with home life, it was a respite.

Not much to look back on now. Just faded recollection of hallucinatory visions. Cackling madly with a cigarette ash falling lapside as friends and strangers laughed amongst each other – some form of Psychedelia music playing in the background.

It broke free the mind of that of a rigidly raised teenager. Turning myself into more of a loose, idealistic, and perhaps overtly optimistic 90s teen with a penchant for words, instead of some “do it the straight/proper” way mindset.

But it all worked out. Sorta

I sit with hot instant coffee made

My kitchen counter is abysmal. Shit thrown everywhere. Spoons. Towels. Food scraps. Coffee grounds. Cigarette butts. Remnants of clutter left by a nutcase who is ready to be done with the State Of Missouri™.

Not surprisingly, the writing subsidizes this discomfort little

Remember writing “The Cathartic Experience”? Ah, days of forever yesterday. Now it is like a shot of written insulin.

Tobacco does as it always does

Yea, more movement and travel and greener pastures ahead. Travel meaning point a to point b. No gandering along the way.

Until we never meet again, Missouri.

a little tryin' a little dyin'

Sometimes I feel near-death. The Pulmonary issue I have is ongoing, and there is weight in the chest, causing short breaths, less-deep inhales. So, I'll see a specialist when I can.

Also, sometimes, unrelated, I go to the text editor and think I will write something, and think: “I just can't”. Because I cannot. I can't muster the words or want to have anything to say. As Bukowski put it: “let the words leap from your fingertips”.

Before it was just writing out what I was thinking always. Sort of lost in a malaise of shit-thought so I would shit-post whatever.

So I try. And I (feel as if I) die. But not really dying. But pretty much trying.

...you've really made the grade

And the coffee fills my blood and brain with words and wonder (well, words – wonder is dead like my sanity, et al)

Been having a healthy perception of myself, myself online, and other things lately. Namely the e/de/revolution of the Web. It's just as it is, just better. I can't quantify it (of course) but the horizons seem glimmy-er and calmer than years past.

New Horizons, almost – only in the people/communities online, and not so much the Zuck game

I wanted it (the Web) to be this way for some time – at least 2019 when blinders came off. Just a saner, nicer place. Some are still sludging it out through big platforms, but I assume they already have their skin thickened like lacerated leather if they suffered through Cancel Culture, then the Jan 6 thing, then COVID-19. Deucing out from those services seemed to be “in the Nick of time”, and it'd be like that of hanging on by the edge of a long, frayed rope while a sanity chopper lifted me to brighter skies – wreckage and carnage of insurmountable Hell lay bubbling and hissing below.

Ok, onto the night

I blog to differ, Inquiry

In response to this post, utilizing this quote within:

...I'd say that Twitter already IS being rebuilt, via Mastodon. So should a Twitter os repo ever come about, few would likely indulge. Mastodon has a better grip on it (a microblogging service) that is open source.

In regards to it (Twitter) being rebuilt as a company, I'd say there are only so many starry eyed optimists to put money into a co that

A) has fallen off a cliff in recent years

B) was never that successful to begin with (compared to Google, FB, etc.) in regards to profit

C) the likelihood of “the masses” wanting to go to/go back to it, is/are (the is/are conundrum, again) increasingly unlikely

So yea, someone could flood money into the service, but the onboarding of users would be difficult, and then “monetizing” their use (as that's the Modus Operandi for social media) would prove difficult and run short of high expectations. Just, invest in a different co – make more money!

But in regards to Masto being a service of concentrated toxicity, that is a threat, too. People who hoard in tens or hundreds of thousands of users per instance have the same hive mind potential as Twitter did. Smaller instances, more “intimate” exchanges there are likely safer.

And yea, anything can be built, rebuilt, and exploited, but I think them days are over for the underworld we once called Twitter

I would prioritize one thing, and one thing only – be sure to consolidate and liquidate any/all assets to ensure that every single laid off employee gets their full severance, as well as every to-be-laid off employee receives equal severance/benefits. Then, begin a gradual and consistent dismembering of the service. Drawing down algorithmic usage, advertisement spots, and open sourcing the software for any of those interested in utilizing it for their own project(s). The Twitter brand name, as a household name, would be auctioned off (such as AOL sorta did back when) and it could reside in a company's portfolio for all to recall, but never encounter again.

I would then resign, and perhaps accept my Nobel Peace Price

Caseworker took me to health center. Did annual exam.

I lost interest in her

Yea Inquiry, I see where you are coming from with this post, and my title there is a play-on words for that title (clever, am I) but I DO see truth in both phrases – as where “anti-stroking” (albeit crass yet of course funny way of saying it) puts forward the same meaning of “diffusing”, but the outcome is the same: people do whatever they want online (perhaps from a small(er)/adjacent Web perspective), and ideally (or passively hoping) it changes the greater narrative of online discourse.

It might happen, but I'll wax diaristic (not a word), either way. And as you mentioned Kottke, and those “who knew him BEFORE he was cool(!)” is certainly a constant narrative of blogging, itself – the “been blogging 20 years” bunch. The “back when my computer ran on sticks and ember, we had to smoke signal our words into the sky and that was the only “cloud” there was!“. Folks who think age of a blog puts their words at higher value. If logging experience comes with brownie points.

All the same, I write because I do, and since the Internet was invented and I like using it, I write online. But before the Net, as a kid I wrote (bEfOrE wRiTiNg WaS cOoL) and when the Web rolled around, I figured I'd write here, someday.

So, we delineate from an entry that tossed stones (atop a house of glass) at the degenerative nature of online correspondence, and would up saying stuff about me, because I write about myself a lot. So it is :/

Stay well, keep writing, and may the cards fall where they may ;)

Been keepin' up with the “hOt NeWs” this evening, as I do most early evenings. It's the same as the past month – Musk bought Twitter, blog posts on how to go to Mastodon from Twitter, Musk bans Mastodon, Musk bans the press, the press joins Mastodon, the press get unbanned, the press leave Mastodon, all is forgiven and Koombayah is sung is unison around the flaming dumpster fire of inequities and disdain.

Actually most are blog posts about people going to Mastodon, liking it, and deciding to stay. Which is fine for most, those who need not worry of a blog, or “outlet” of writing or video making or recorded audio, et al. Just a place to say a lil sumthin' sumthin' will work.