A walk down memory lane

Someone shared this article on a chat group, which is an interesting read to those who are curious about how life was like in Singapore and Malaysia a few decades ago:

Without any maids, our mothers cooked, cleaned and took care of the whole family. They still had time to chat with neighbours.

Everyone had candy floss, Red Lion fizzy drinks and ice balls with syrups. Diabetes were rare and aspirin/panadol cured all illness.

We walk or rode adult's bicycle to school, the richer ones had their own mini-bikes or pawang chia Ironically, we all had problems with our bicycle brakes, and after running into the bushes a few times, we learned how to solve the problem.

Prefects were a fearful lot ... more fearful than the teachers. Detention class was like going to prison for a day. We had “public canning” in schools.

NO ONE ever won the big prices on “TIKAM-TIKAM”. It was a scam but it did not stop us from coming back for more.

Motorbikes were rode without helmets. It was rare to ride a private taxi. We hardly ride a bus. we either cycled or walked to everywhere.

We drank water from the tap and NOT from bottles.

We spent hours in fields under the sun, playing football or flying kites, without worrying about UV rays. It did not affect us.

We roamed free, catching spiders and did not worry of Aedes mosquitoes. We kept our spiders in match boxes and ready for a fight anytime.

With mere 5 pebbles, girls played endless games; and with a tennis ball, boys ran like crazy for hours.

When it rained, we swam the drains & canals to catch “ikan sepat”, none of us were dissolved in rain.

We shared one bottle of soft drink with friends, NO ONE actually worried about catching anything.

We ate salty, sweet & oily foods, bread had real butter and sometimes condense milk. We enjoyed very sweet coffee, tea, and “ice kacang” but we were not obese because ...... WE WERE OUT PLAYING ALL THE TIME!!

We left home in the morning and played all day till hunger drove us back home. When needed, our parents knew how to find us. NO ONE actually watched over us and WE ALWAYS WERE SAFE.

WE DID NOT HAVE HANDPHONES BUGGING US. We rode bikes or walked over to a friend's house and just yelled for them!!

We did not have Playstations, X-boxes, Nintendo's, multiple channels on cable TV, DVD movies, no surround sound, no phones, no personal computers, no Internet. WE HAD FRIENDS and we went outside and found them!! Our TV was black and white.

We fell out of trees, got cut, broke bones and teeth and we still continued the stunts.

We did not have birthdays parties till we were 21, that is when we started to take notice of girls.

We have not heard of the word “Bumiputra”. We only knew our friends by names. Their parents were Pak Cik and Mak Cik or Uncle and Aunty.

In badminton, we did not change the shuttle as long as it was in flight. Regardless of how many feathers were left in the shuttle, our game continued..., but still Wong Peng Soon and Punch Gunalan made us proud in Badminton.

Match-boxes were always “chilly” or “king kong” brand ...; to own a box of matches from a hotel was something great.

Regardless of whether we could afford one, we always knew Maths tuition was $10.00 a month.

All parties were held in the Town Hall.

We felt pleased to see a policeman and we were always eager to tell police everything we saw.

Morris Minor and Volkswagen Beetle were on our roads...driven alongside Kingswood, Vauxhall, Opel and Chyrsler. Executives of companies drove Peugeot 504. Japanese cars were considered “inferior”. There were no traffic lights, only roundabouts.

Our favourite local performer was Rose Chan and the Beatles were the most popular band. John Wayne's westerns on Sunday Cheap Matinees were 25 cent per show. P. Ramli & Wahid satay were our movie idols.

Malay weddings had joget sessions in the night, it was the only time to ask the Malay lady for a dance.

Football was played barefooted in torn-filled “padangs”, rain or shine ..., but still Santokh Singh, Soh Chin Ann and Mokhtar Dahari made us proud, we actually beat South Korea in football.

Susu lembu was delivered to our house by our big, friendly and strong “Bayi” on his bicycle. All “jagas” were “Bayi” and no place got robbed.

We played “gasing”, made our own kites & had kite fighting with glass glued threads and made wooden guns & used seeds from plants for bullets.

Kang Kong was free …, easily harvested by riverside. “Kembong” was 30 cents a “kati” and nobody wanted “ikan pari”.

When the Circus came to town, everybody went to see it. It was the best LIVE show I ever saw.

Usually we did not have to BUY fruits; they were self planted or given by neighbours or friends.

The idea of parents bailing us out if we broke the law was unheard of. Our parents actually sided with the law ! Nobody knew about child psychology!

Yet this generation has produced some of the best risk-takers, problem solvers and inventors ever!

The past 40 years have been an explosion of innovations and new ideas.

We had freedom, failure, success and responsibility, and we learned ...... HOW TO DEAL WITH IT ALL!

And YOU are one of them!!

You might want to share this with others who have had the luck to grow up as kids before things took a turn in the 80s.

Have a blessed n nostalgic feeling going down the memory lane 😘

This is 1 of d best suspense jokes.

D father asked, “Why did u say good-bye Grandpa?”

D little girl said, “I don't know daddy. It just seemed like d thing to do.”

D next day grandpa died. D father thought it was a strange coincidence.

“Holy crap!” thought d father. “This kid is in contact with d other world!!!” But he didn’t tell his wife abt this.

D father practically went into shock. He couldn't sleep all nite, got up at d crack of dawn & went to his office.

He was nervous as a cat all day, had lunch & watched d clock.....He figured if he could get by until midnite, he wud be okay.

He felt safe in d office. So instead of going home at d end of d day he stayed there, drinking coffee, looking at his watch & jumping at every sound. Finally midnite arrived; he breathed a sigh of relief & went home.

When he got home his wife said, “I've never seen u work so late. What's d matter?”

She said, “U think u had a bad day. U'll never believe what happened to me. Y’day morning my boss died in d middle of a meeting!”

“You cannot taste me, until you undress me” – Banana

“You cannot eat me unless you lick me” – Ice cream

“You can not play with me unless you blow me” – Balloon

“You cannot enjoy me unless you suck me” – Lollypop

“You make me wet & put me in your mouth everyday” – Toothbrush

“You cannot enjoy me unless you spread me” – Butter

Yet Another Joke of the Day

A man and a woman were travelling on a train. Their conversation is as follows:

Woman: Everytime you smile, I feel like inviting you to my place.

Yet another joke – The greedy rat...

A rat swallowed a diamond and the owner of the diamond contracted a man to kill the rat. When the rat hunter arrived to kill the rat there were more than a thousand rats bunched up all together and one sitting by itself away from the pack. He spotted and killed the one sitting by itself and to the owners surprise, that was the exact one that had swallowed the diamond!

The amazed diamond owner asked: “How did you know it was that rat?” He responded: “Very easy,

When idiots get rich, they don't mix with others!!!”

Two 90 year old men, Mike and Joe, have been friends all of their lives.

When it's clear that Joe is dying, Mike visits him every day. One day Mike says, “Joe, we both loved football all our lives, and we played football on Saturdays together for so many years. Please do me one favour, when you get to Heaven, somehow you must let me know if there's football there.”

Joe looks up at Mike from his death bed,” Mike, you've been my best friend for many years. If it's at all possible, I'll do this favour for you.

Shortly after that, Joe passes on.

At midnight a couple of nights later, Mike is awakened from a sound sleep by a blinding flash of white light and a voice calling out to him, “Mike—Mike.”

“Who is it? asks Mike sitting up suddenly. “Who is it?”

“In heaven”, replies Joe. “I have some really good news and a little bad news.”

“The good news,” Joe says,” is that there's football in heaven. Better yet, all of our old friends who died before us are here, too. Better than that, we're all young again. Better still, it's always spring time and it never rains or snows. And best of all, we can play football all we want, and we never get tired.”

That's fantastic,” says Mike. “It's beyond my wildest dreams! So what's the bad news?

Would you rather have 300 online virtual friends as compared to 3 real lifelong friends? 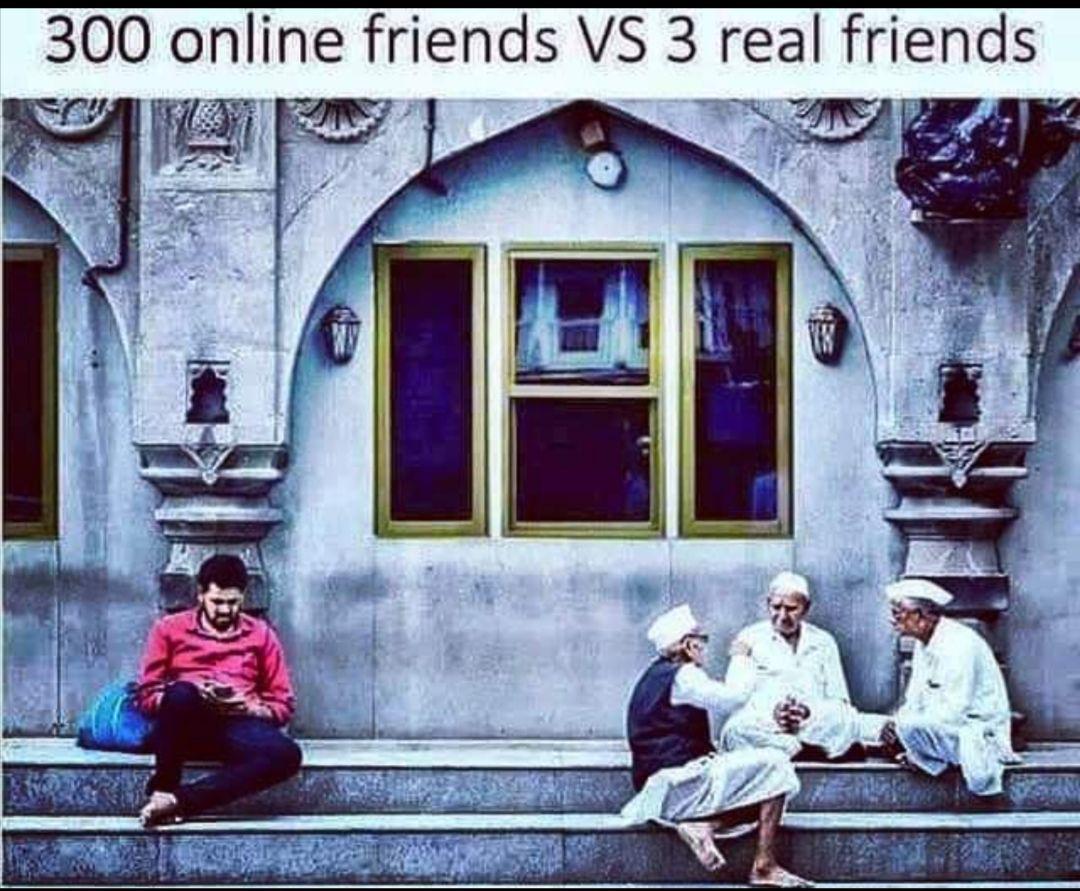 Amusing attempt of an oversized traffic policeman attempting to hide behind a lamp post :–) 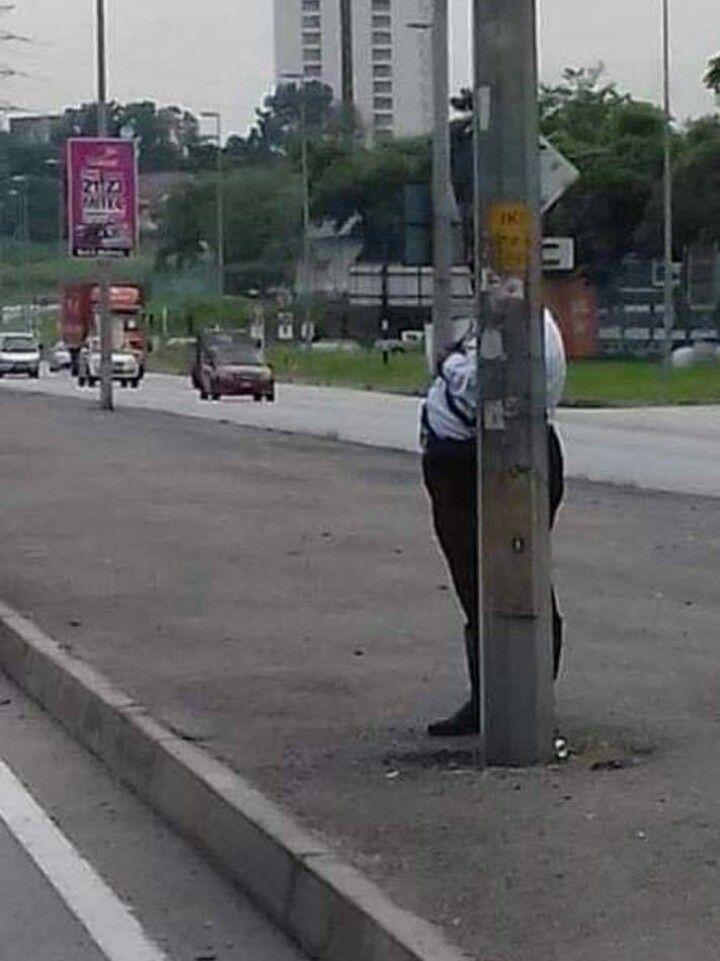