The first book in the Spin Saga Trilogy by Robert Charles Wilson is a fantastic science fiction novel with a grandiose theme, yet with totally human, and actually humanistic, characters. Spin won the Hugo-award for best novel in 2006. 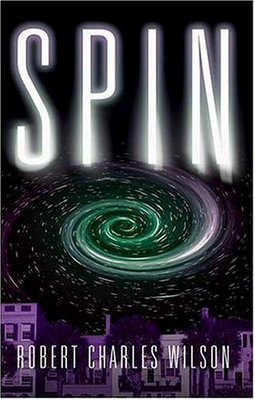 The novel follows two storylines involving the three same characters in different times in their lives. The first tells the tale of the two siblings Jason and Diane Lawton through the eyes of their best friend Tyler Dupree. As they grow up their different personalities forms and without knowing it they will all in their own way play an important part in the things to come.

Jason is a brilliant kid with father issues. Diane is highly sensitive and spiritual. Tyler is the more normal of the three, but still quite intelligent and determined. Also he “secretly” loves Diane.

One fateful night a mysterious and unfathomable alien race encapsulates Earth in a “membrane” (named Spin) effectively shutting Earth off from the rest of the universe. The aliens quickly get named the Hypotheticals. It is also soon discovered that time itself works quite differently inside the membrane from the outside and suddenly life and indeed the whole human race seems doomed. Jason gets to work on a solution. Diane joins a doomsday cult. Tyler becomes a doctor.

The second storyline jumps into the future with Jason obviously dead and Tyler and Diane on the run in an Asian country. Tyler has injected himself with some kind of drug/cure which is somehow connected to the Spin, and the government is closing in on them.

Spin is that rare science fiction book that successfully combines huge ideas of space, time, terraforming and the weirdness of science with humanistic themes and believable characters. I liked it a lot, even though it was slow going sometimes, and had pretty liberal ways of describing the science behind the huge ideas.

I struggled a bit with how Wilson describes the females in the story. While the males are determined, set for destiny and brilliant, sometimes unscrupulous, but mostly in the right, the females are failing mothers, drunks, spiritual and religious, and always dependent on a male. Also I find that, even though the characters are believable humans, the language used to describe their relationships felt somewhat simple compared to the science and the spiritual stuff. Sometimes I felt as I was reading a YA novel with some extreme science and tech added on for good measure.

All in all though these things are not consistent and there are some good exceptions to my main gripes with the novel. It is a solid story that, despite its lack of action, got an interesting theme. I notice that the the next books in the trilogy looks to be a bit different and I will therefor probably view this as a stand alone novel with an open ending.