It’s always hard writing reviews for books that I absolutely adore because I never know where to start and how to stop myself from rambling on and on about the book.

This is one of those times.

From the very first page until the last, I was hooked. With every page and every POV character I met, I fell for this book. It has everything I want in a fantasy novel: compelling POV characters, a lush universe filled with life, magic, and history, a really cool magic system, romances that didn’t feel forced, representation, and a super interesting premise that was well executed.

This book honestly left me hungry for more. Hell, I devoured this book. Had it not been for nursing school and the fact that I had 3 exams coming up, I would have finished this book the day I started it.

While one sister rules Aranth — a frozen city surrounded by a storm-wracked sea — her twin inhabits the sand-locked Golden City. Each goddess has raised a daughter, and each keeps her own secrets about her sister’s betrayal.

But when shadowy forces begin to call their daughters, Odessa and Haidee, back to the site of the Breaking, the two young goddesses — along with a powerful healer from Aranth, and a mouthy desert scavenger — set out on separate journeys across treacherous wastelands, desperate to heal their broken world. No matter the sacrifice it demands.

This novel follows four characters from two very different worlds: one of endless nights and the other of endless days. Okay — yes technically speaking, they all live on the same planet, Aeon, that basically caused to split into these two halves after an event called The Breaking. This event was caused by twin goddesses both of whom place the blame of the event on the other sister whom they claim is dead. Each sister rules their own half of the world: Asteria rules Aranth and its eternal night while Latona rules the Golden City and its endless days. Each twin has a daughter, Odessa and Haidee, who are two of the POV characters we meet. The other two are Tianlan (Lan) and Arjun.

Neither Odessa nor Haidee know of the other’s existence, let alone the existence of each other’s worlds. This is due to the fact that this harsh world is filled with monsters, magic, and extreme environments that kill anyone who tries to explore Aeon.

Nevertheless, Odessa and Haidee set off on their own adventures in an attempt to fix their broken worlds and restore the balance by going to Brighthenge — the temple where this mess began.

While the plot is slow at times (and almost frustratingly so), what kept my interest in the story was the alternating POV chapters — each one in 1st POV — and alternated between the two worlds with something that either developed the world or developed the characters. I honestly appreciated it because something would happen on one side of the world during Arjun or Haidee’s POV that explains or adds to the experiences Odessa or Lan would deal with on the other side of the world and vice versa. It made things more suspenseful because of the foreshadowing.

But I think also what is truly striking about this plot is how much hope is in each page. Even as things looked really bad on one end, there was still that hope that things get better. It’s so deeply intertwined. It embodies this line from Hadestown: “Take what's broken, make it whole/A song so beautiful/It brings the world back into tune/Back into time/And all the flowers will bloom…”

However my favorites have to be Haidee — who immediately captured my attention — and Odessa — who I admit, I didn’t care for at the beginning.

I honestly connected so much with Haidee. She is an adorable Nerd ™ who needs to be protected. From the start, I liked her. I immediately connected with her. She wants to change things for the better and has ideas, but how she goes about them — well, for someone with the brains, she can lack common sense sometimes.

But that’s good! It balances out her intellect and makes her more human. It shows even smart people can sometimes lack common sense or lack the ability to see beyond their goal. I also liked how the more she learned about the rituals, the more fearful she became. This only added to the excitement because we see what’s happening with Odessa. I wish that we had more time in this book so we can see how Haidee reacts to everything that happens once the two parties meet up, but unfortunately, the book ends before we get that.

As for Odessa? Man, I was so bored with her in the beginning. Every time her chapter popped up, I yawned. But then she started accepting those fancy gifts and she got new powers. Man, oh man.

The change in her throughout the book was so well done and subtle, but obvious enough that there’s something wrong. And to add to the suspense was the fact that in Haidee’s chapter, we get more and more background about the rituals and the sinister nature of that the goddesses are forced to take part in order to maintain balance. What made things even cooler is that we have another POV character who is witnessing all the changes Odessa is going through.

In terms of Lan and Arjun’s characterizations, I enjoyed the both of them as well. I sort of wish we had more of them, but at the end of the day, the story revolves around taking a broken world and making it whole again. Like I said above, hope is so deeply infused into this story. Yeah, there are sinister things happening without a doubt but these characters all have so much hope in them for creating that better world.

“There are people dying out there! We can’t just pick and choose who we should save! They deserve sanctuary, too!”

“… “I got brothers and sisters back home, and they deserve a better world than this. And just because the people in charge screwed everything to hell and beyond doesn’t mean we can’t find a way to take back what we’re owed.”

Hope, man. This desire to create a better world when greedy, corrupt people would rather keep it the way it is to maintain the status quo? Yeah, I feel that.

This worldbuilding I just — I have no words to describe how much I adore the worldbuilding in this world. Rin has this amazing, spectacular ability to weave and shape universes that are well-crafted, developed, and has layers on layers. The mythology, magic system, environment, creatures, devices, and so on are all absolutely fantastic. I bow down to Rin’s worldbuilding skills because they take my breath away.

I’ve mentioned it before in my other reviews just how important worldbuilding is to me. Even a good plot can crash and burn if the worldbuilding isn’t well done. It’s hard to immerse myself in a book that doesn’t have an established, well-developed universe. Obviously, worldbuilding is just one aspect of a novel — an important puzzle piece that ties everything together.

This world that Rin has created is harsh. It’ll eat anyone alive. It’ll drown them, freeze them, starve them, or leave them in the scorching desert with the sun blistering their flesh.

And I know this because Rin shows it. I know people will complain about the slowness at some points. I know I did just now. However, even in those moments of slowness where the plot wasn’t moving, the world around our characters was being colored in and sharpened. There’s a part of me that of course wishes that the plot was faster paced and had no breaks, but at the same time? I need breaks like this to understand this world better and to get why the characters are doing what they’re doing.

But this world has goodness and justice left in it as well. The scene in the desert with Arjun and Haidee and the dolugongs is just one of the cutest scenes in the book. It’s a reminder that even in this dog eat dog world, there’s kindness and hope out there. Not everything or everyone is trying to kill you.

As I mentioned before, the chapters are in 4 alternating POVs and we’d jump between Odessa or Lan to Haidee or Arjun. Each one of these POVs was distinctive. I knew when I was reading an Odessa chapter and when I was reading an Arjun chapter because their voices were totally different. The emotions they experienced would leap out of the page and I would feel my hands start to sweat and my heart palpitating a bit there.

Other Things of Note.

While I am a minority (Filipino-American), I am neither disabled or a part of the LGBTQ+ community. As such, I don’t feel comfortable commenting on either one of these communities because I can’t give the same insights as someone who is a part of them. It’s not my place to speak about things that I am not a part of because while I can empathize with people’s struggles and desires, my experiences as a Filipino-American heterosexual woman is not the same and colors my vision differently.

I will say, however, that I truly appreciated the fact that there was representation in this book. It’s a book filled with diversity with inspirations from various cultures.

Yes, there’s romance in this book. Two, actually: one established and one in the works. I enjoyed them both. I don’t really have much to say about either one which is surprising because I usually have a lot of things to say. However, I did like both the ships and enjoyed them.

Overall — Do I recommend?

I loved this book. From the plot to the worldbuilding to the characters, I adored it. I thought it was funny, thrilling, nerve-wracking at times, and just beautiful. Hope and bravery fill this book. It doesn’t let you go. I am honestly so looking forward to the next book.

So do I recommend The Never Tilting World? Absolutely. 100%. Go read this book and immerse yourself in this beautifully crafted universe. 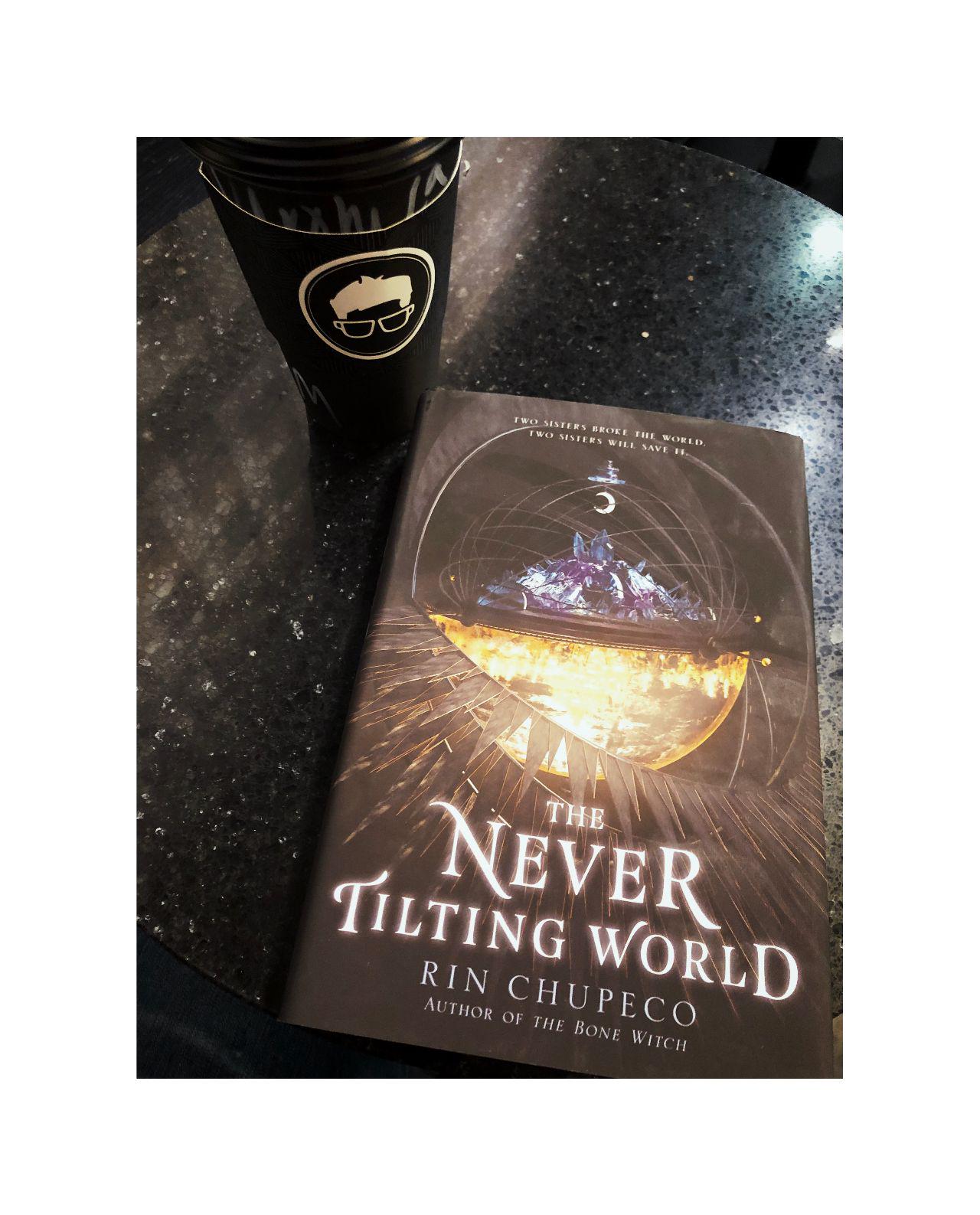 I want to thank Shealea of Caffeine Book Tours for giving me this opportunity to review this awesome book. I want to thank HarperTeen for providing me with the eARC via Edelweiss in exchange for an honest review. 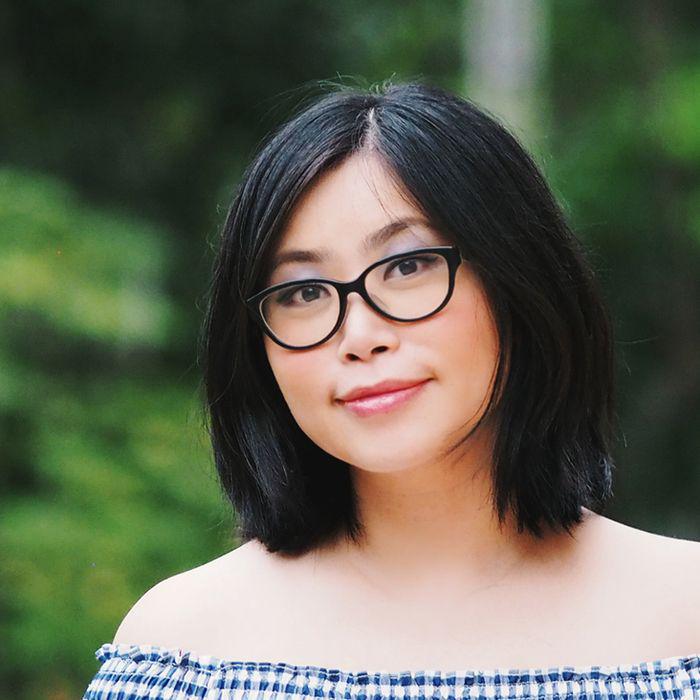 Rin Chupeco has written obscure manuals for complicated computer programs, talked people out of their money at event shows, and done many other terrible things. She now writes about ghosts and fantastic worlds but is still sometimes mistaken for a revenant. She is the author of The Girl from the Well, its sequel, The Suffering, and The Bone Witch trilogy.

Despite an unsettling resemblance to Japanese revenants, Rin always maintains her sense of hummus. Born and raised in Manila, Philippines, she keeps four pets: a dog, two birds, and a husband. Dances like the neighbors are watching.